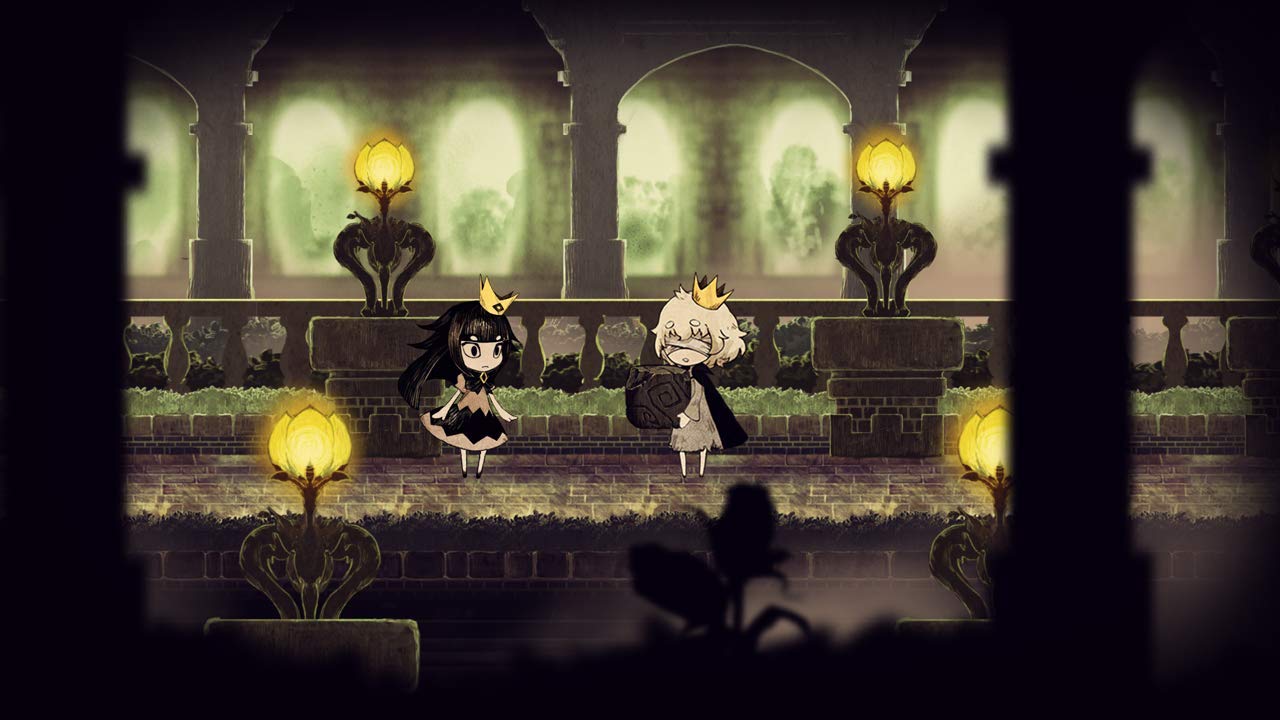 The Liar Princess and the Blind Prince is this title from Nippon Ichi Software that I’ve seen in Japanese game catalogs but never invested in, neither monetarily nor informationally. The cover art looked pretty, sure, but importing games is a pain in the ass, expensive, and, oh yea, my Japanese is terrible. Learning that it was getting localized was interesting, but it didn’t exactly get my irons blazing. Still, it showed up, I shrugged my shoulders, and thought it could be a good time. Nippon Ichi Software hadn’t done me wrong before, why should it start now? Five GB is sizable on the Switch, but I figured the graphics and such would be the reason, so I could wait out the download and give this title a shot.

Holy gaming, this was such a wonderful experience.

The story goes that, in a faraway kingdom, there is a forest that’s full of monsters and strange animals, and they’re all watched over by a witch. A wolf lives there, and she sings a beautiful song every night. A prince hears the song, applauds, and the wolf grows to love the attention, but fear the chance the prince might see her as a monster. One day the prince gets too bold and tries to climb the hill where the wolf sits to see who sings the songs, and the wolf, panicking, tries to cover his eyes and promptly slashes his eyes out. The prince returns to the castle a blind man, shunned by the royal family, and is locked in the dungeons. The wolf feels horrid, and beseeches the witch to help the prince. The witch agrees, and also agrees to turn the wolf into a beautiful princess in order to better gain the prince’s trust and guide him back to the forest. Now we begin a dangerous game of truth and lies, because the princess lives in fear of the prince learning her true identity, and she is gradually growing to love him more and more. Will there be a happy ending? Happiness, as we find, is all in how you perceive things. 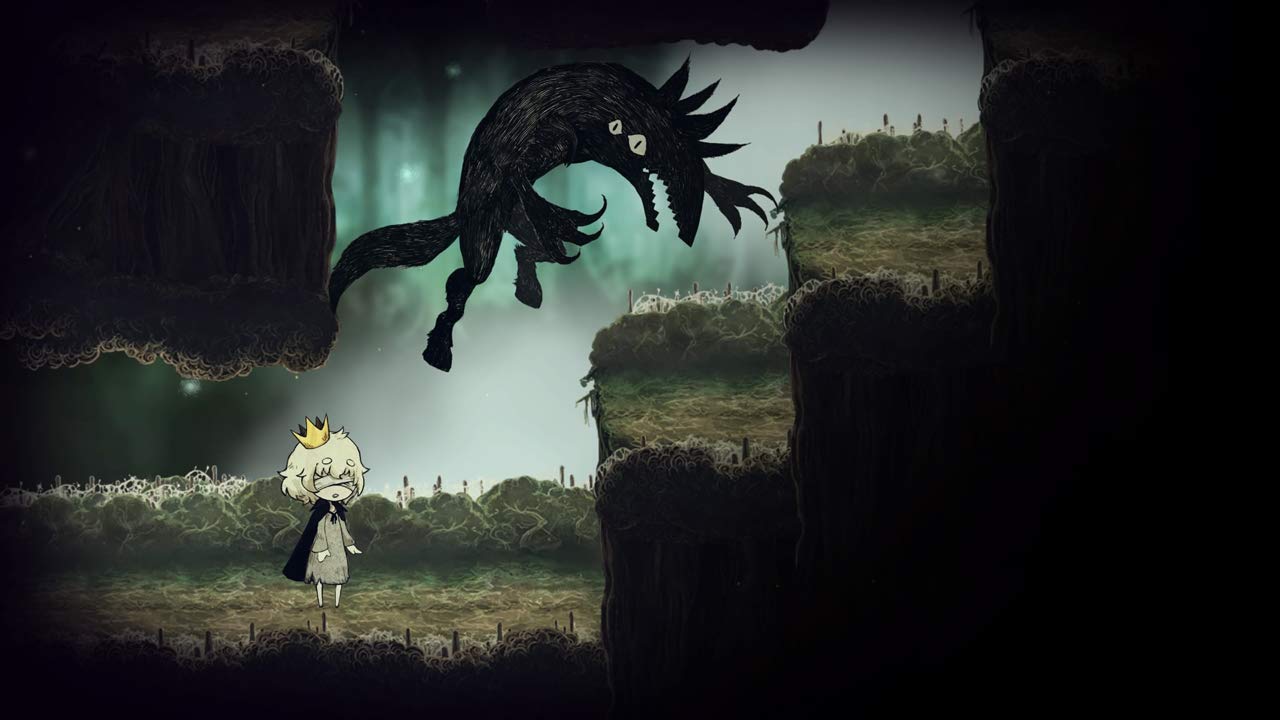 The Liar Princess and the Blind Prince is a side scrolling adventure puzzle game in which you, the princess, need to lead the prince safely to the other side of the stage. Each stage has a series of caveats where any number of factors may come into play. You’ll reach locations where you need to abandon the prince to activate a trigger to open the way for both of you. You might need to ask the prince to trust you and walk on his own a set distance in order to pick something up or bypass a moving door. And, of course, you will need to turn back into a wolf once in a while so that you can reach difficult locations on your own, as well as dispatch some of the monsters that inhabit the forest. After all, just because you’ve fallen in love doesn’t mean every toothy beast has, and they all have a taste for sweet, soft little princes. As you get further into the game, you gain more and more technical abilities to interact with the prince, all the way to the end where everything comes down to timing, reasoning, and a bit of luck on the parts of both you and the prince.

In terms of level design and execution, there’s something both immensely satisfying and sometimes frustrating about the game. On the one hand, no single level is crafted to be impossible. There are times where you’ll need to find out, sometimes the hard way, that gravity is not your friend and you need to pace yourself carefully. In your wolf form, the princess can drop and jump to any height with zero repercussions, and it even pays to occasionally have her scout ahead, as the prince will wait patiently until your return. However, as a human, both you and the prince have the bad habit of dying when you fall from any sort of height greater than a tabletop. So there are certain locations where stepping off at the wrong moment will end in your or the prince’s death, making you reload at the last auto save point. There are even these springy mushrooms that come into play a bit later on, and it’s almost unfair when you both walk off a ledge, the princess hits the mushroom and lives, and the prince misses it by an inch and now everyone’s crying. Gravity is a much more dangerous foe than the biting piglets or the goring boars that you run into on occasion, and also that much more troublesome to deal with.

The levels additionally are a bit exciting because there is some rewards for exploration and travel. Within the levels, there are both petals and flowers, and you’d do best to try and find them all. The petals are generally floating in locations that are only slightly out of reach, so you’re often able to get them through jumping around or simply going a bit off the straightforward path to the goal. The flowers, on the other hand, usually require a bit of logic, because you need to pick them and then bring them back to the prince in your human form, and the prince, more often than not, didn’t accompany you to find the flower in the first place. The flowers, as a result, are less frequent, but both are required to be found if you’re a completionist and you want to unlock all the achievements, which, in turn, unlock all the goodies in the gallery for people who are invested in this game. And, trust me, if you’ve gotten this far in the review, you’re definitely going to want to be invested in this game. 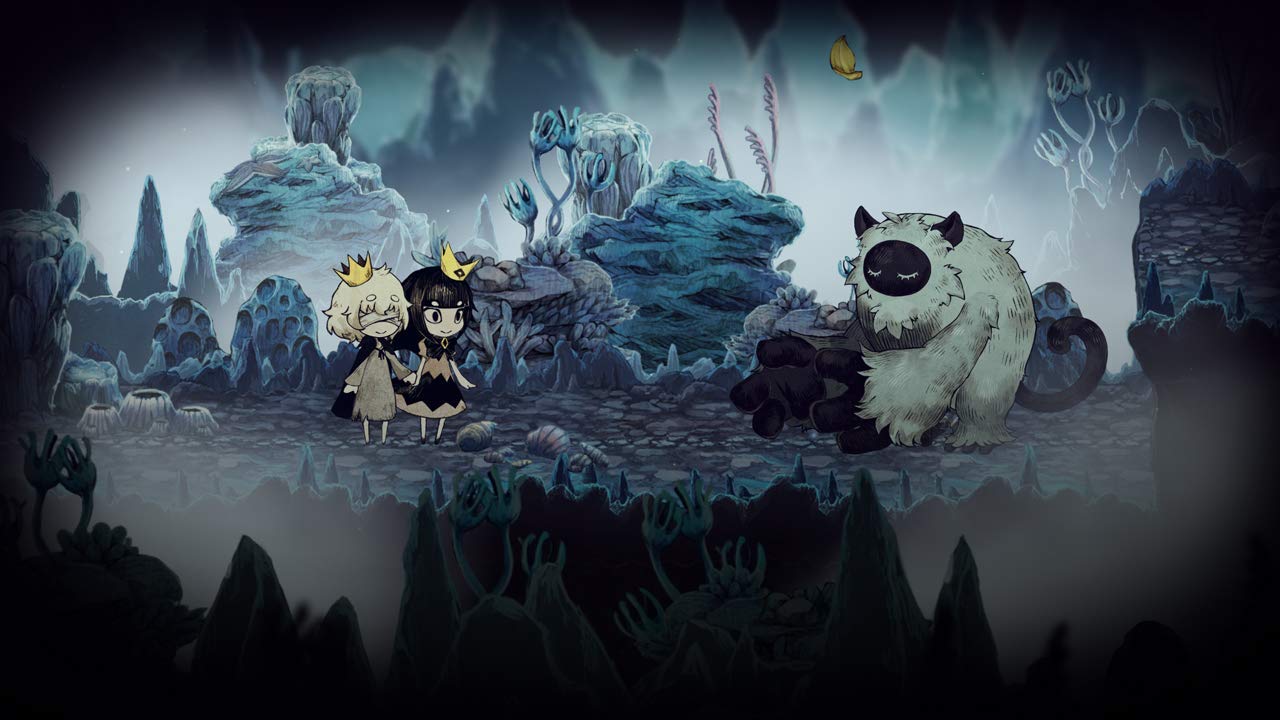 The Liar Princess and the Blind Prince might just be one of the sweetest titles that I’ve played for the Switch so far. The story itself is a cute enough beginning, but the tale really gets more enthralling the longer you go on. The prince really doesn’t know that the wolf which blinded him is the same princess who now guides him, hand in hand, on a journey to get his sight back, and he doesn’t even realize that there will certainly be a price for this repair. The princess struggles to reveal the truth and is so afraid of losing the prince that she is torn up with turmoil and self-hatred at every turn. Even as we run into other monsters who are hungry, injured and dangerous, the prince cannot see them, and thinks them only to be other humans in need of help and support. He’s so unflappably sweet, it breaks your heart to watch him struggle with this long journey, and, every time he grabs the princesses’ hand, his character pops on a little smile that makes your heart melt. It’s such a good story that you literally don’t even have to play the game. At the start of each stage, you can “skip stage” to just see what the next page in the saga will be, with no penalty other than you obviously weren’t able to get all the collectibles in the level you didn’t play.

Best of all, the game’s story is given due presence through a fantastic combination of artwork and soundtrack. The design adds an air of twisted but sincere whimsy throughout, with odd choices like the wolf’s eyes being on one side of her head, like a flounder, or the “moles” that you encounter looking more like flightless black birds than anything else. The monsters that seek to harm you and derail your journey are scary, make no mistake, but there’s nothing inherently threatening about them. Even my kids called them cute, as they were trying to stab the prince in the heart while I desperately clawed through some briars to jump onto a moving platform and save him. Everything is done up with some heavy sepia tones, but it matches the mood and elements of the game, properly portraying a tale that feels timeless and out of time in the same breath. Plus, the music rises to the occasion in the same way, offering a variety of almost mercantile tunes. Each level made me leave the room where I was sitting and walk into a new sort of realm or environment: a shop with a beaded curtain for a door and no visible shopkeeper. A lonely stall at the end of a shop alley where something glinted in the darkness. A jaunt through the woods with the wind at my back and clouds on the horizon. The music is atmospheric and gorgeous, and served to better frame every moment of the story line.

The hardest part in talking about The Liar Princess and the Blind Prince is that it is a bit short, and there is only one ending: finding all the goodies and extras doesn’t change how the story goes, but it does offer a bit more to see in terms of the characters. The execution of the controls and mechanics made for an engaging and fun expedition, where I had to try and try again in some places, and then laughed when I realized what I had been doing wrong. I never grew tired of stopping to find out more from the wolf’s perspective, and inwardly cringed when she lost her nerve and waited one more day to tell the prince the truth. The Liar Princess and the Blind Prince is beautiful, charming, and truly memorable. If you’re at all looking for a wonderful story to read yourself or share with your loved ones, don’t hesitate: be true to yourself, and dive in.

The Liar Princess and the Blind Prince Review

A modern fairytale that speaks volumes through this medium, capturing both memorable characters and a unique, whimsical world.