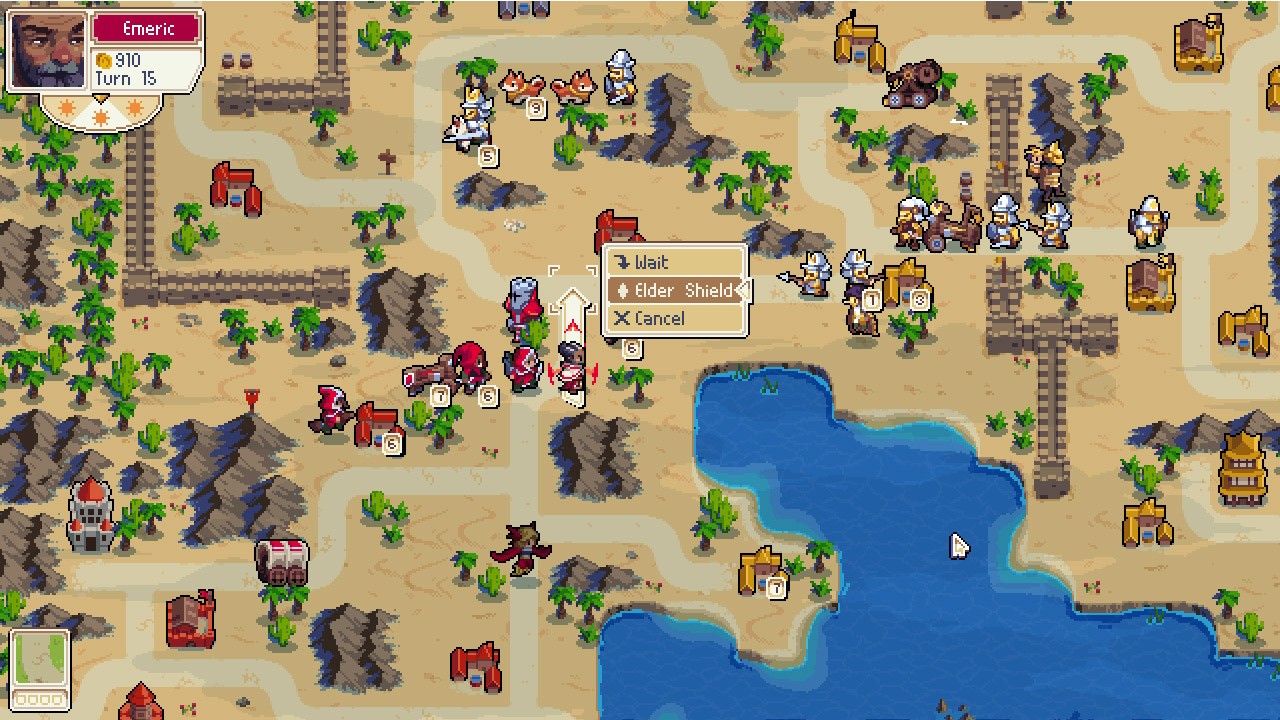 Turn based games aren’t fashionable these days, but the genre has seen a bit of a revival through indie devs; even if we haven’t seen a decent AA title in some time. Chucklefish are the next to dip their toe in the strategy field and the genres definitely in safe hands – Wargroove successfully summons nostalgic vibes all while feeling fresh and modern, making this the best entry in the genre in recent memory.

There’s obviously plenty of comparisons between Wargroove and the Advance Wars series, but while Advances Wars boasted futuristic battlegrounds full of tanks and choppers, Wargroove opts for a more fantasy theme complete with mermen and dragons. The bulk of the game is spent in the games decent length campaign, the main story follows the people of Cherrystone, led by queen Mercia as she flees her homeland after an attack from an undead army committed to taking over the world. On her journey the queen encounters the game’s different classes and while you play most of the game as the army of Mercia and her allies, some side missions see you take control of the enemy factions too. The storyline is a tried and tested formula, but the writing is solid and funny and it’s easy to follow without getting too heavy on the lore of the universe.

Each campaign mission usually gives you the target of destroying either the opposing captain or their stronghold, but other missions give you alternative aims such as holding off attacks or escorting allies. The typical gameplay is fun regardless, but these breaks do a fantastic job at staving off monotony.

Each of the game’s classes have identical unit types but each are completely uniquely designed. This goes for all ground, sea and air units, each having their own skills and abilities that are the same regardless who you’re playing as. It would have been nice if certain unit types had different attributes between different factions but it’s not a deal breaker as it keeps things balanced. 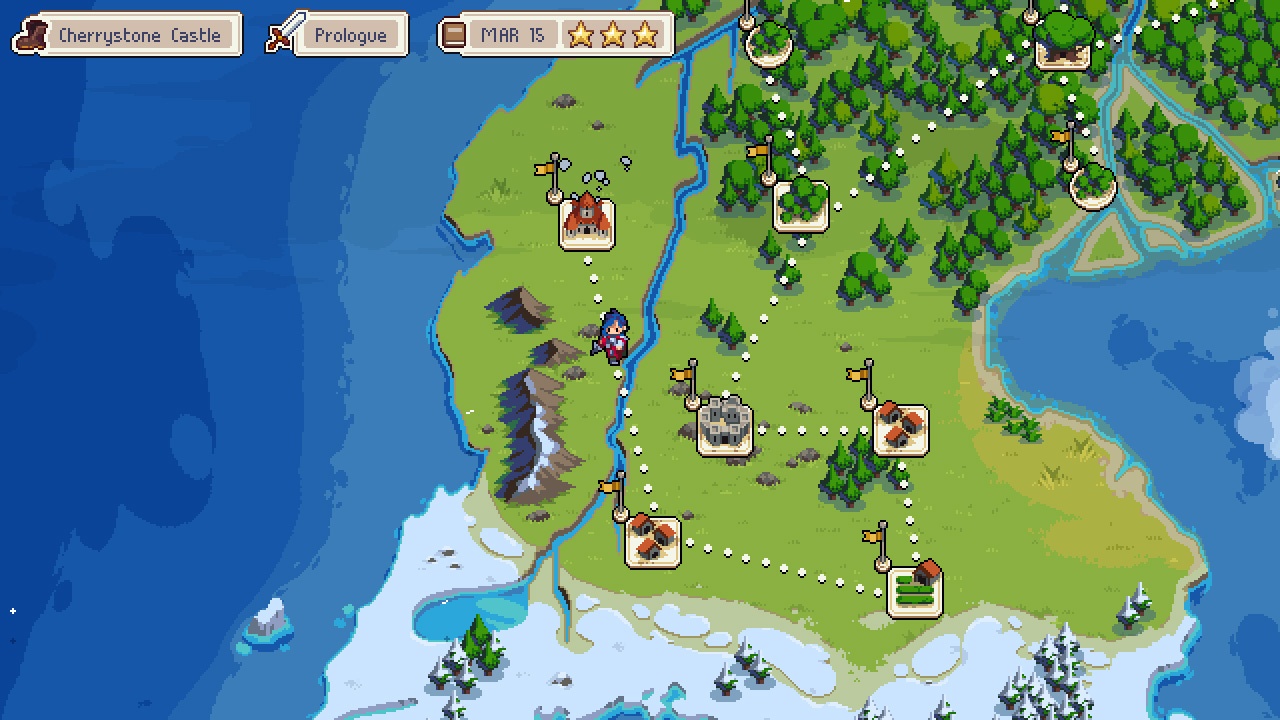 Just like Advance Wars there’s a rock-paper-scissors element to gameplay, for example certain units are more powerful against other units and so on. Striking a balance in your army is important but you also need to make sure you’re planning towards the endgame to steal the win; there’s no point building an army of trebuchets to attack enemy buildings if you have an impending air force coming your way. It’s important to study each unit to learn who works best against who. It’s also important to monitor the environment as weather and geography play a part in how well units are defended against attacks was well as the speed they traverse.

There’s a great tug of war feel to maps too as capturing buildings provides gold as well as a place to restore damaged units. If you aren’t careful you can quickly lose control of critical locations which can lead to defeat if you don’t make the effort to take your land back.

The creature and map design is fantastic and the dedication to world building is obvious. Everything from buildings, boats and air units all incorporate the feel of their different classes, for example the wooden ships and giants of the forest dwelling Floran’s and the samurai foot soldiers of Heavensong make it obvious who you’re fighting against, even if they lack different abilities.

But while units are carbon copies commanders are unique, with each one having different abilities that can help turn the tide of battle. Each commander needs to personally deal enough damage to power their own ‘groove’ with abilities varying from damage to enemies to buffs to your allies. Some early abilities seem a little useless (for example a shield that is meant to increase unit defence but doesn’t seem to do much) but most are interesting to use and genuinely impactful on the battlefield.

Unlocks come thick and fast as you progress through the games campaign, from new content to characters and more entries. Solo players can enjoy both puzzle and arcade modes, but the game boasts online battles too. Arcade mode is a great way to test your skills as each commander, working through a series of battles across different difficulty settings to fight for control of a super weapon. You have just one shot at winning each of these matches so if you lose you go back to the start and the harder difficulties offer some intimidating AI challenges.

Puzzle mode is a whole different ball game where you need to defeat all enemies in one turn. They’re really well thought out puzzles and make full use of the games different elements and despite being difficult they’re incredibly satisfying to complete. 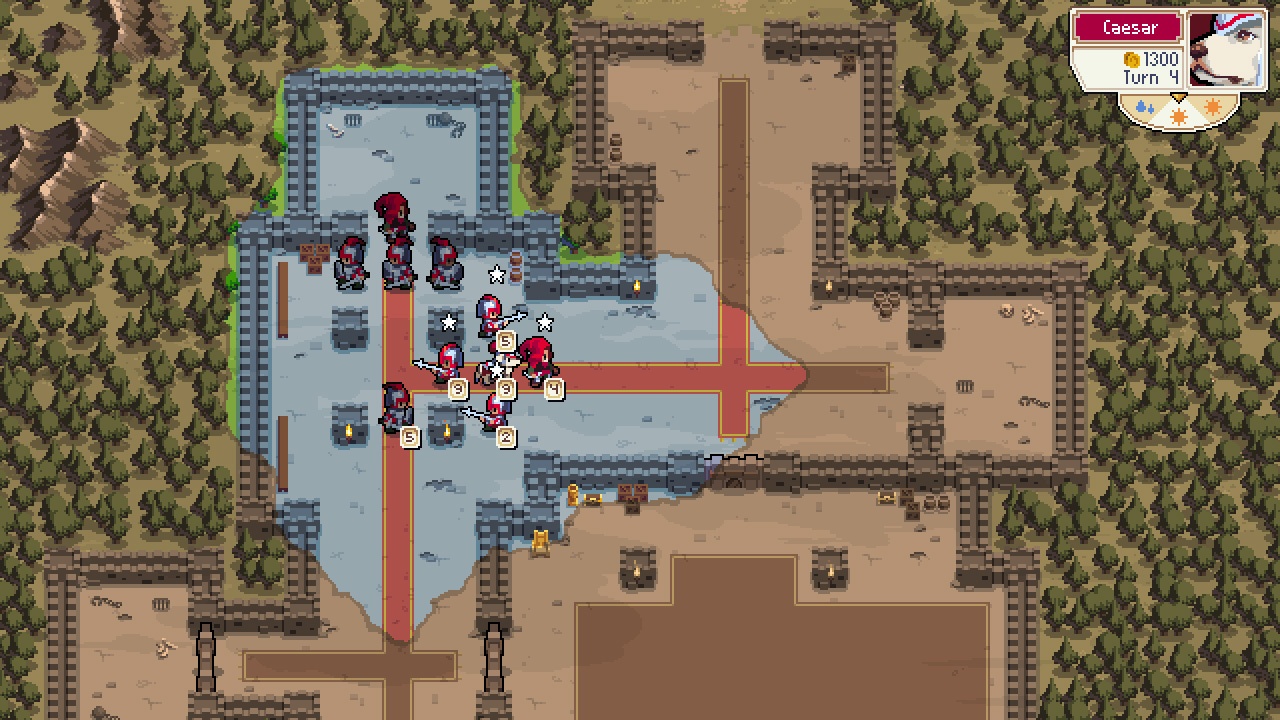 Multiplayer is a fantastic addition, even if it just offers matchmaking and no leader boards or any competitive modes. If you’re after a full match there and then you’re better off playing against someone you know who is after the same thing, otherwise it’s often a tedious experience, especially if whoever you’re playing against isn’t paying full attention. Luckily games save and you can revisit later, but this can mean that games can go on for an infinite amount of time. It’s great to see that multiplayer is also cross play with the Steam version so you should never have any problem finding competition.

Rounding out the experience is a map creator where you can make your own scenarios and campaigns as well as import others inventions. In effect it provides you endless amounts of content and for such a new game there’s already a wealth of great content available online, with the dedicated player base recreating maps from classic titles such as the Advance Wars series as well as fresh original content.

On top of everything Wargroove is simply just a lot of fun to play. It’s both easy to get to grips with and incredibly challenging if you want it to be, but never too hard that it feels frustrating. It’s bright, colourful universe is the perfect fit for the Switch and it features some of my favourite world building of recent memory. It’s overall really impressive how a game can feel so modern yet be such a hark back to a nearly forgotten genre.

Chucklefish are cementing themselves as one of the best indie developers of the modern era and Wargroove is another incredible entry into their growing catalogue. It’s a gorgeous adventure with plenty of content and acts as a superb call back to one of the best gaming series of all time all whilst having enough character of its own to feel fresh. An incredible adventure.

Chucklefish have yet again proved why they’re the indie darlings the development world needs.