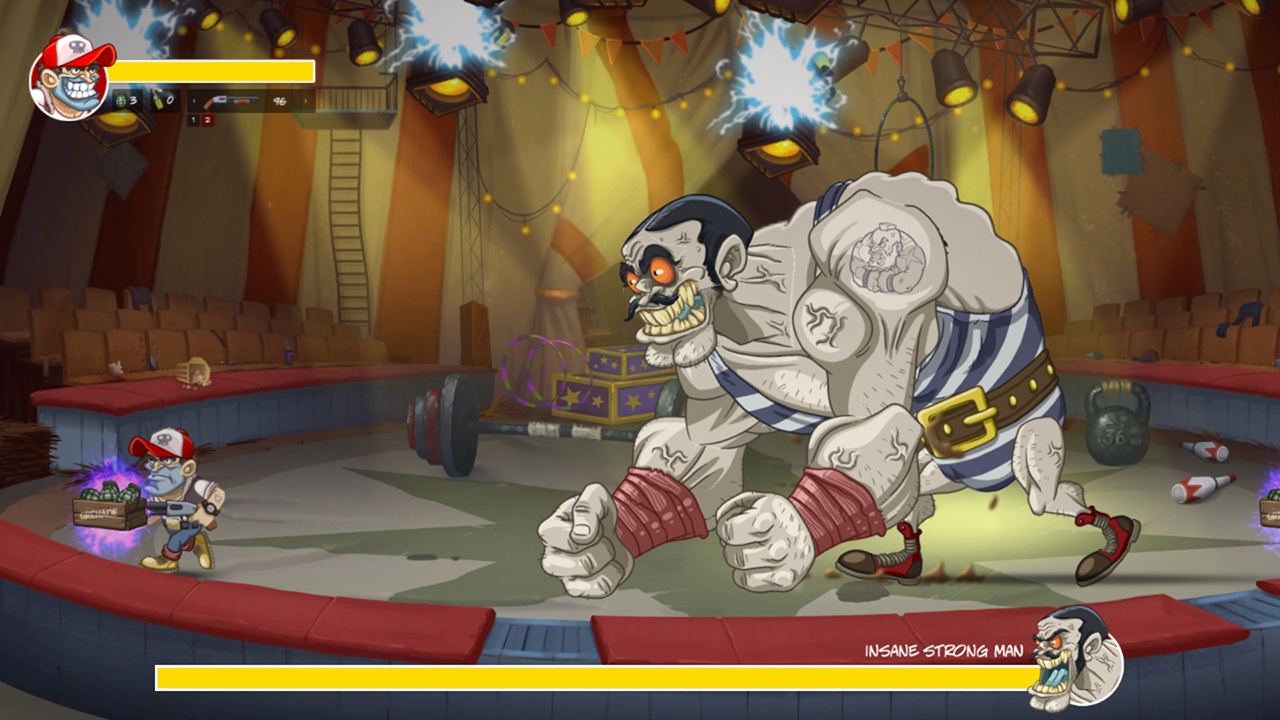 Creepy Road is one of those games that comes up on the Switch and you’re just sort of left thinking “huh” It’s not that it’s a bad game or a terrible experience, but there’s something about it that feels unfinished and a bit off center, generally a tone of “not quite” that resonates throughout. Having found that the game originally came out on Steam last May, that leads me to believe that the development team, Groovy Milk, was so confident in their product that they began the porting process almost immediately after launch, if not beforehand. It’s a proud and bold statement, but, once again, I’m left circling back to that sensation of not quite satisfaction, but not quite disappointment either..

The story of Creepy Road is decent enough. You play Flint Trucker, a long-haul driver who’s just excited to get back to his hometown and see his girlfriend, Angelina, who’s job as a panda trainer in a circus has luckily brought her home for a show. When Flint arrives, however, it quickly becomes apparent something has gone wrong in a big way, as he gets into a truck crash and is surrounded by possessed, ultra-violent animals. Grabbing his trusty pistol from his glove compartment, Flint only has one mission: to figure out what the hell is going on and to hopefully rescue Angelina. It’s a classic “hard ass on the warpath” sort of game, though I was seriously, unexplainably uncomfortable with the fact that Flint’s voice over moments don’t perfectly match up to the text that I could read on-screen. I mean, c’mon, how hard is it to follow a script? In any case, you’re a macho dude, you’re going to wield a ton of weapons, and away we go. 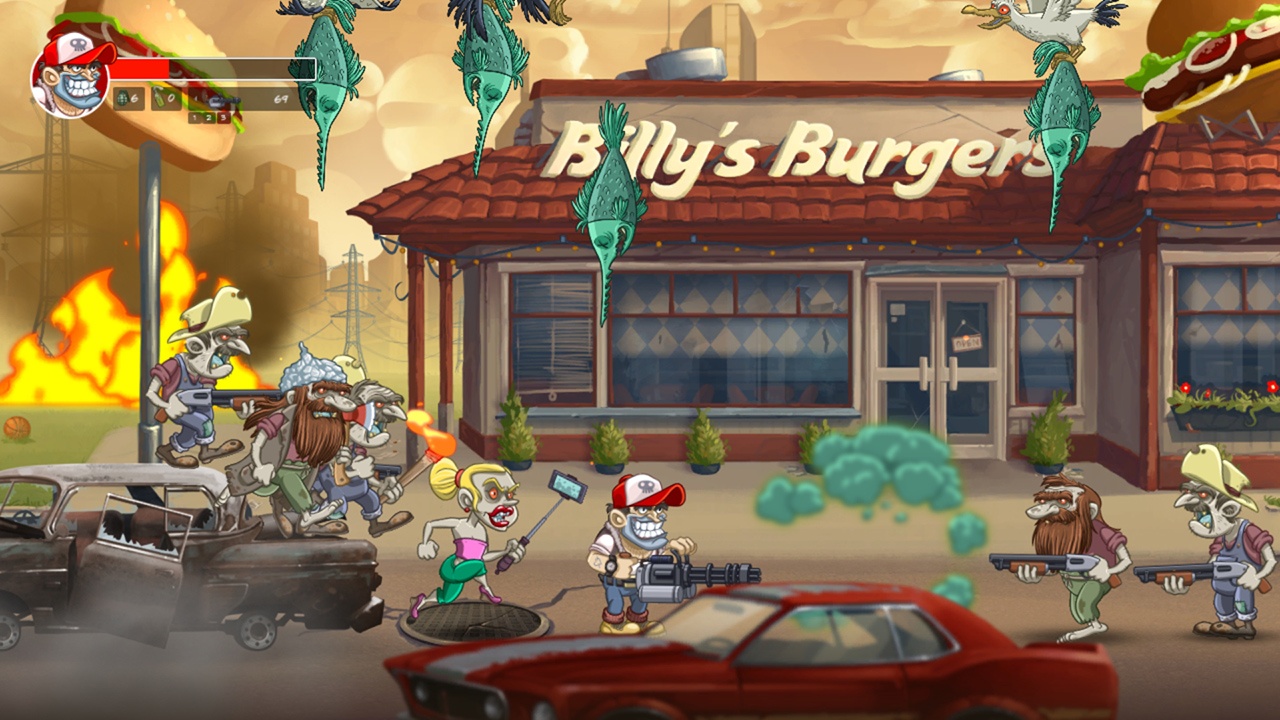 Now, in concept, Creepy Road does everything right for what it aims to be. It’s a side scrolling, 2D shooter where you just have an increasingly large number of enemies to contend with that act and react in different ways. You’ve got runners, you’ve got shooters, you’ve got exploders, fallers, all manner of insane and delightful animals to blow to bits before you can get to the end, which may or may not contain a big boss that acts as the end cap for each stage. As you move along, you pick up health kits in the form of food, single use explosion items like grenades and molotovs (separate triggers for each), and a series of increasingly weird weaponry that culminates with a toss-up between either the rocket powered fist or the blaster that turns enemies into poop.  You never feel like you’re running low on ammunition on lower difficulty levels, though you do want to be careful not to just haul off and shoot the shotgun wherever you can when you first get it. It’s a shotgun, not a gatling gun: you’ll miss and waste bullets in record time.

And I actually really, really enjoyed the boss fights of Creepy Road. There’s a bit of a pattern to work out with each, be it when their massive strikes will knock stuff down from the ceiling or when you need to time jumps to dodge shoulder mounted missiles. The bosses have their own personalities and styles, like the massive and somehow obese Hyperman that will generate platforms that lead to his own demise. You probably won’t lose a lot of sleep over figuring out the methodology needed to beat each boss, but the final encounter with a certain evil overlord will take a couple of swings before you can get the hang of it. Additionally, the bosses really let you appreciate the art style and direction that the developers went with. The detail that goes into everything, from the slobbering police zombies to the kamikaze balloon pandas is great in the mass scope of things, but you really appreciate it in the one-to-one moments with big bosses and all the effects that come into play with the lighting and design.

The rub, though, comes from when you wipe away the glitz, glamor and gore of the game’s presentation. At the very center of it all, Creepy Road is just a very simple, almost mechanical game. There are four difficulty settings that you can set to, and they all adjust the number of enemies on-screen, the number of hits they need and (I suspect, cannot confirm) the number of power up drops that you encounter. The higher difficulty levels require a serious amount of invested time and skill with reflexes, but there isn’t anything about them that I would say constitutes a “gaming edge” sort of mentality or practice. It’s just lather, rinse, repeat until you get good at it. And the game doesn’t require a lot for you to be good. It just asks that you be ready to lay down line after line of fire in order to keep enemies at bay and to ultimately survive long enough to run to the end of the stage. Most of the time, you only need to really kill everything on-screen when it becomes a requirement to move on: a lot of times I finished stages with enemies nipping at my heels. 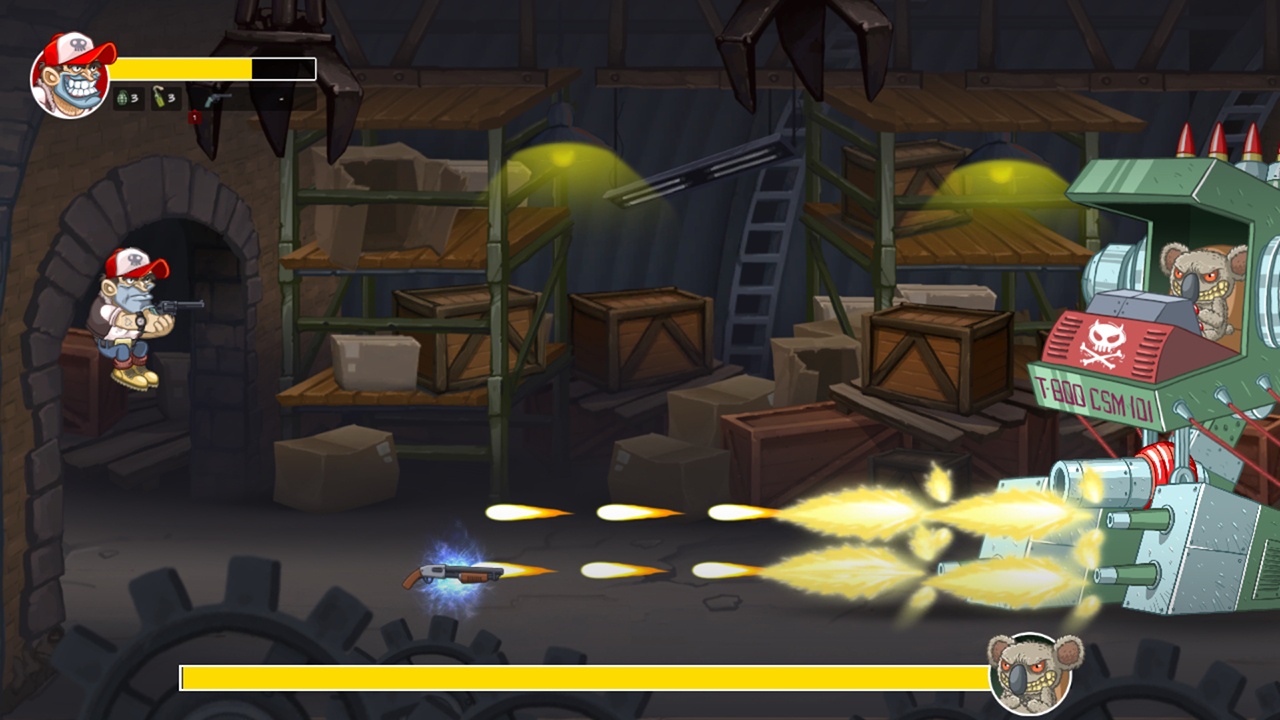 I also wasn’t a huge fan of how old-fashioned it felt. With graphics like these, I had certain expectations in the control department, and Creepy Road simply didn’t deliver there. There’s only a four directional aiming process when it comes to shooting: diagonal is off the table. Given the fact that you do, in fact, get attacked at every angle imaginable, this feels like a massive oversight by the developers that’s just sort of accepted in the “old school” idea that isn’t really present. Additionally, there are plenty of times where there was some lag if I switched weapons and then tried to hurl either a grenade or a molotov, which cost me precious health and time. If you’re going to incorporate so many weapons and allow so much variety in attacking, why on earth are you going to penalize players a precious moment before you can then throw the mass effect damage items that are so critical to survival outside of boss battles? It simply doesn’t make sense.

Lastly, the game is just so short. It’s not a bad thing, because goodness knows I’d rather a game exit gracefully rather than wear out it’s welcome, but we barely have time to care about Flint, Angelina or anything concerning WHY the entire township has gone mad. With only a handful of levels and the whole game being finished in under three hours, I was hoping there was some kind of incentive to keep going and make the game go longer. But there’s only challenging higher difficulties and running the same gamuts over and over. There’s not a lot to it, and, though I love the graphics and the music, there’s nothing especially spectacular in actual gameplay. If this is your jam – simple shooters with good graphics and some decent gags – then it’s a solid Switch port with some slight but redeemable performance issues. Otherwise, this road is far from Creepy: it’s just sort of odd.

A short, somewhat sweet shooter that delivers on graphics and ideology, but not so much on replay or excitement.