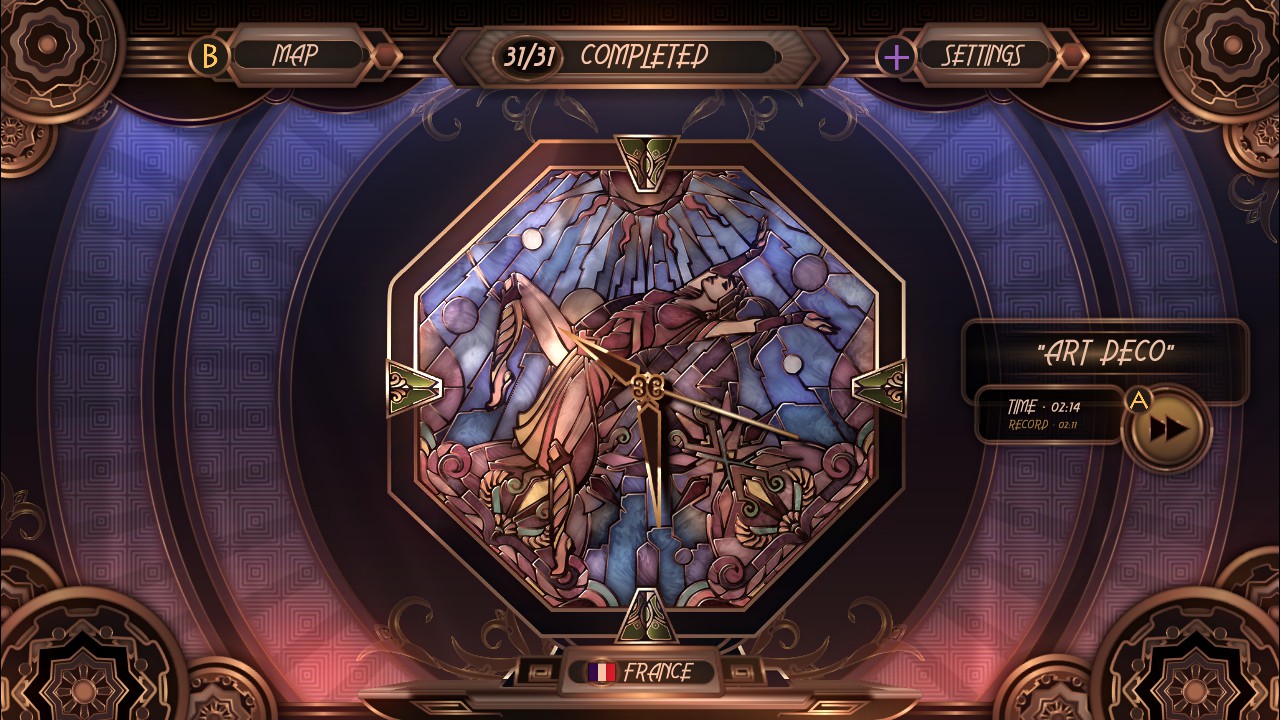 Originally released on the PC back in 2016, Glass Masquerade entranced gamers with its super-relaxing gameplay that tasked players with completing a number of beautiful, stained glass jigsaws. A port for the Switch makes sense then, as the gameplay is perfectly suited to lounging around on the sofa or for a quick diversion when travelling.

My initial thoughts upon starting the game were extremely positive. There’s no introduction or tutorial needed as you’re instantly presented with a world map of 25 puzzles to complete, although you’re initially limited to only a single starting country before the others are unlocked as you progress. Only one button is needed to play as you click on the various jigsaw pieces and attempt to place them in the correct position of the play area, where they either satisfyingly slot into place or spin back towards their starting position. To get you started a few starting positions are highlighted (this can be turned off in the menu system) but beyond that there’s no further hint system – not that one is needed. 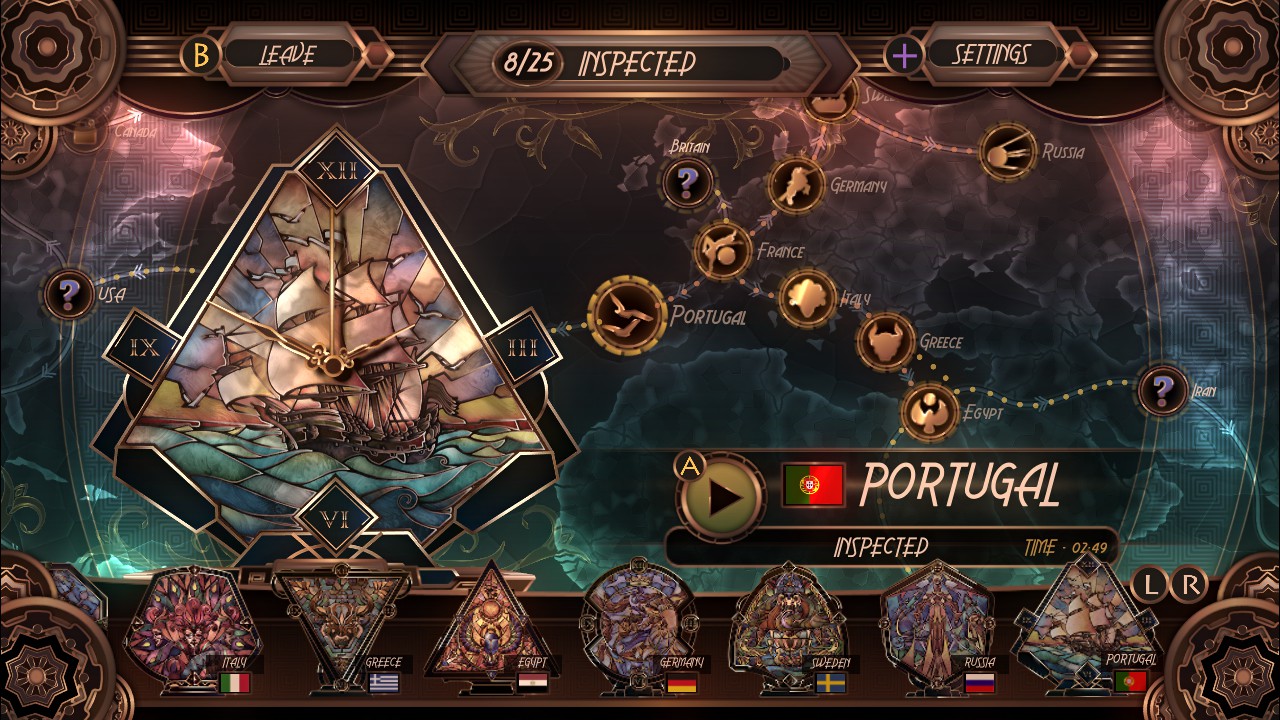 Of course, I can’t review Glass Masquerade without commenting on the puzzles themselves, which are gorgeous themed mosaics constructed of stained glass. Oddly they’re not stained glass windows though, but stained glass clock faces; not that this impacts on the game at all though. Clock hands are briefly superimposed over the puzzle area whenever you successfully insert a jigsaw piece but otherwise the clock theme doesn’t matter – and in fact the puzzle outlines are rarely standard circles anyway. The images though are beautiful to look at, brightly-coloured and depicting traditional scenes from each country. What is a bit odd for a jigsaw game is that you don’t get to see a preview of the image you’re trying to construct, although this does add an element of intrigue as you slowly fill in the mystery scenes.

Each puzzle will typically take between 5-15 minutes to complete although you’re not rushed at all – there’s no time limit to finish (although you do get to see your time once you finish) as it’s designed to be a relaxing experience, ably complemented by a soothing soundtrack. This makes it perfectly suited to just play a single puzzle casually, and I’d actually advise against trying to rush through multiple puzzles as that would negate the chilled-out atmosphere. And more importantly, you’d be finished before you know it as with only 25 puzzles there’s actually less than four hours of game here for you to enjoy. The two-year old PC game has several free bonus puzzles available, but developer Onyx Lute have for some reason decided not to include them in the console editions.

However the lack of longevity is a minor point compared to the many usability issues I encountered. The pieces displayed around the outside of the puzzle space are only displayed in silhouette and aren’t correctly orientated. They do light up with colour and rotate to their correct alignment once you pick up a piece, but revert back once you change to a different piece meaning you end up having to manually select them one by one in order to examine them. This is only a minor annoyance compared to the main problem though – only a few of the available pieces can be previewed on the screen at once and you have to scroll through them in order to see more. This problem could have been mitigated if it was possible to sort or re-order the pieces yourself but for some reason this isn’t possible, which I found incredibly frustrating while playing. 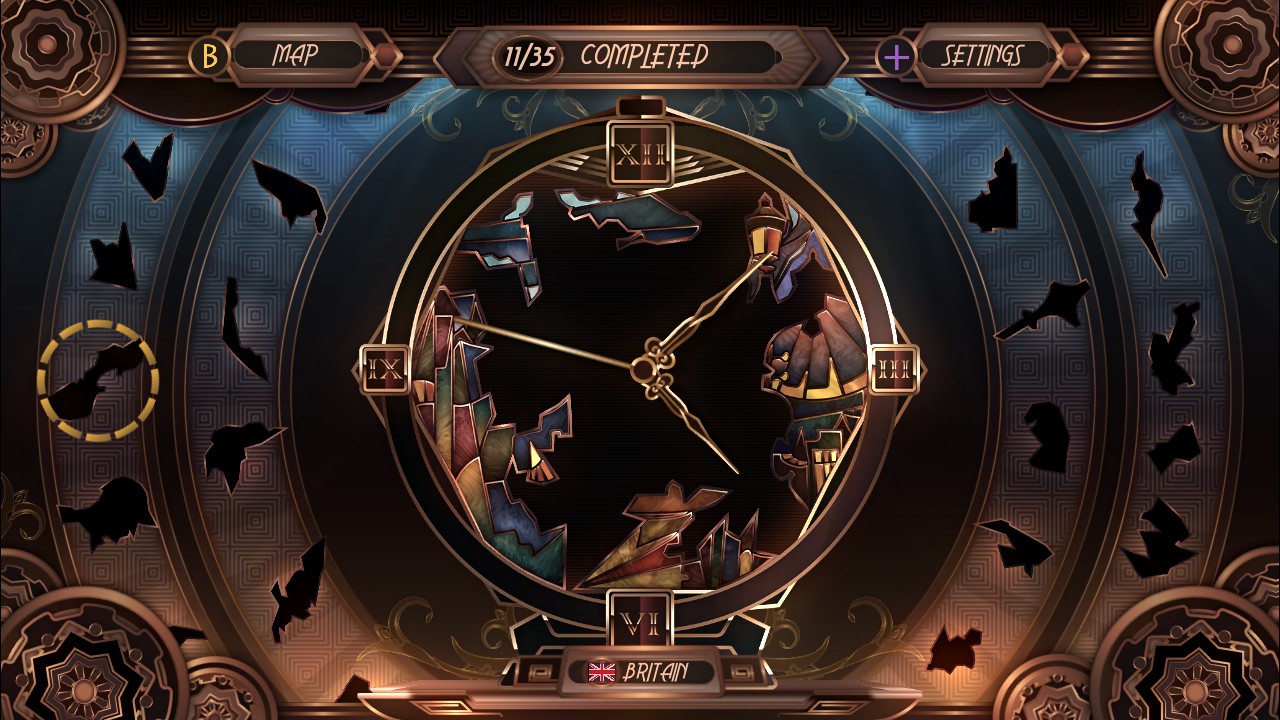 While I’m criticising Glass Masquerade for usability concerns I should also point out the absence of a zoom function which I couldn’t quite believe wasn’t an available function. Some of the pieces are very small and difficult to see, particularly when playing the Switch in handheld mode where I often found myself squinting and holding the screen right up to my face in order to try and get a better look. The difficulty rating for the various puzzles is very odd as well, as the opening puzzle has a three-star difficulty rating before ramping up with the majority of puzzles being rated as either four-stars or five-stars. There were no one-star puzzles at all and only a couple of two-star puzzles (which are strangely only made available after completing some three-star puzzles).

The lack of any replayability is also noteworthy, as upon completing the game there’s nothing else to do and there’s no reason to replay any of the puzzles unless you want to try and beat your best times. Considering a sequel is about to be released on the PC, I don’t see why a ‘complete’ edition with all the puzzles from both games couldn’t have been available for the console versions. While Glass Masquerade for the Switch is objectively enjoyable to play with some beautiful graphics and a soothing chill-out soundtrack, the lack of content (plus certain gameplay issues) prevents me from being able to recommend it too highly.

A beautiful and relaxing jigsaw puzzle game, that isn’t quite a perfect fit.