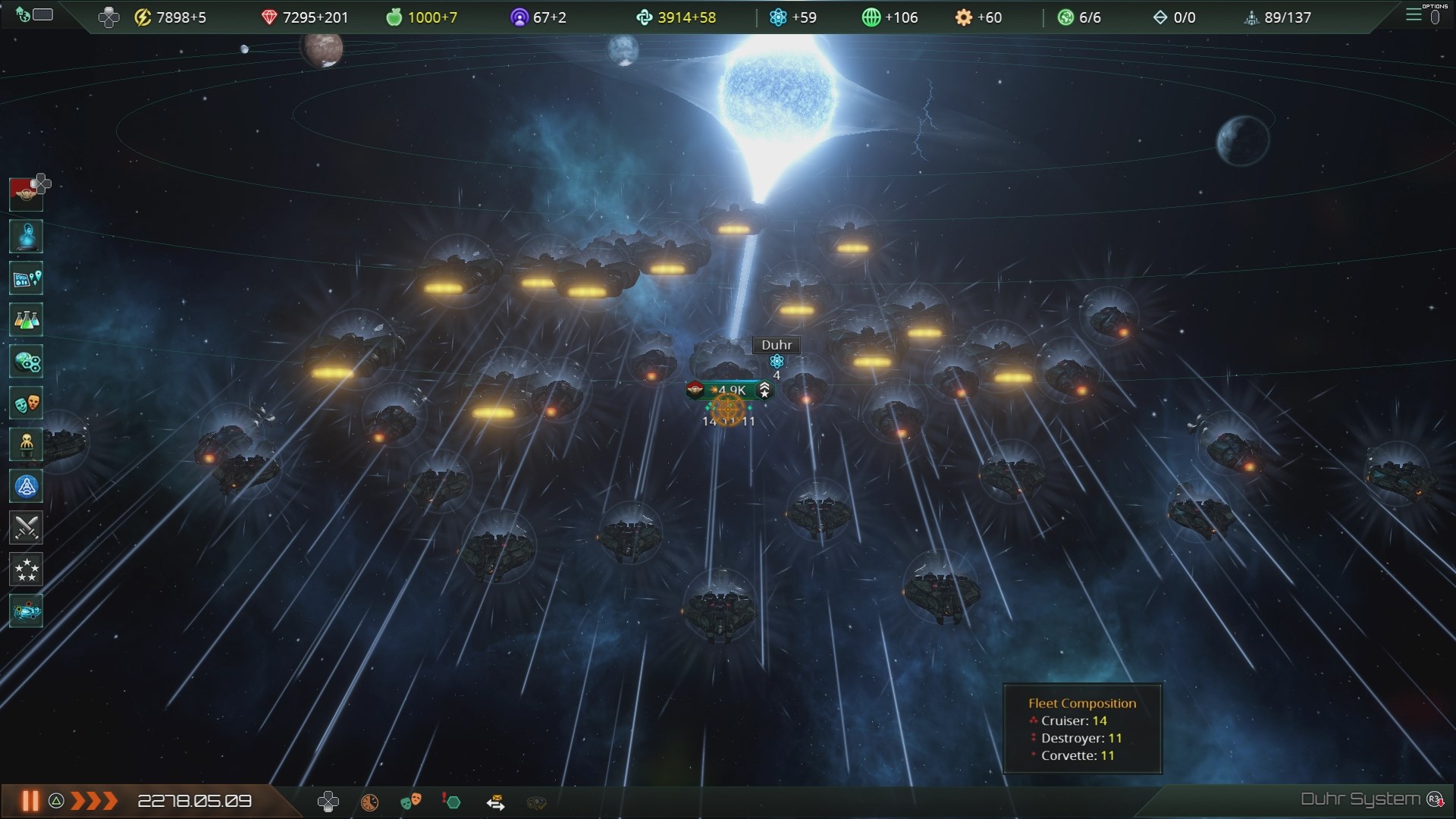 ​​I could write a scholastic essay-length review about Stellaris because there’s just so much to cover. The game is a 4x title which, for those who are unfamiliar, is a subgenre of strategy and stands for “explore, expand, exploit, and exterminate”. The object of the game is to rule a thriving empire through whatever means you dub necessary. Will you spread your influence through careful research and exploitation of resources or make the solar systems run red with the blood of your enemies? Will you focus on good relationships with neighbouring species that encourage trade and industry or will you close your borders and enslave those who would challenge your authority? The choice is yours.

First impressions are everything.  Unfortunately, Stellaris’ is a long initial load screen that rears its ugly head every time you start-up the game–fortunately that’s the only time the game won’t run seamlessly during your session. As far as a PC to console port goes, Paradox Entertainment did an excellent job of translating mouse and keyboard controls to gamepad ones and I had no issue navigating the game’s myriad menus. The UI unobtrusively frames the screen. Quick access to the menus used most often is hot-keyed to the directional pad and you can switch your galactic point of view with R3. You can change game speed by holding down triangle and pause the game entirely by clicking triangle. By using the right stick, you can pan around the star system you’re in, zooming in or out with R2 and L2 respectively. Being able to jump between homeworlds with the touch-pad is also a nice touch. In the game’s options menu, you can save and load your game as well as fiddle with the in-game music player.

Before you can begin your planetary conquest there is a slew of decisions to consider. Stellaris has nine playable species that will ultimately shape your playstyle with their traits and ethics–both positive and negative–and unique approaches to scientific discovery, government, and military action. Each trait your species possesses or system of government they adhere to changes aspects like how many systems you’ll be able to colonize or your relationships with neighbouring species, so choose the one that best fits the way you’d like to play. After some experimenting, i found I must liked the peaceful band of ocean dwelling scientists known as the Scyldari. You can also edit the universe to your liking. Universes range in size from small to large with small still spanning dozens of galaxies to visit and survey. You can also change the game difficulty here and the aggressiveness of the AI. 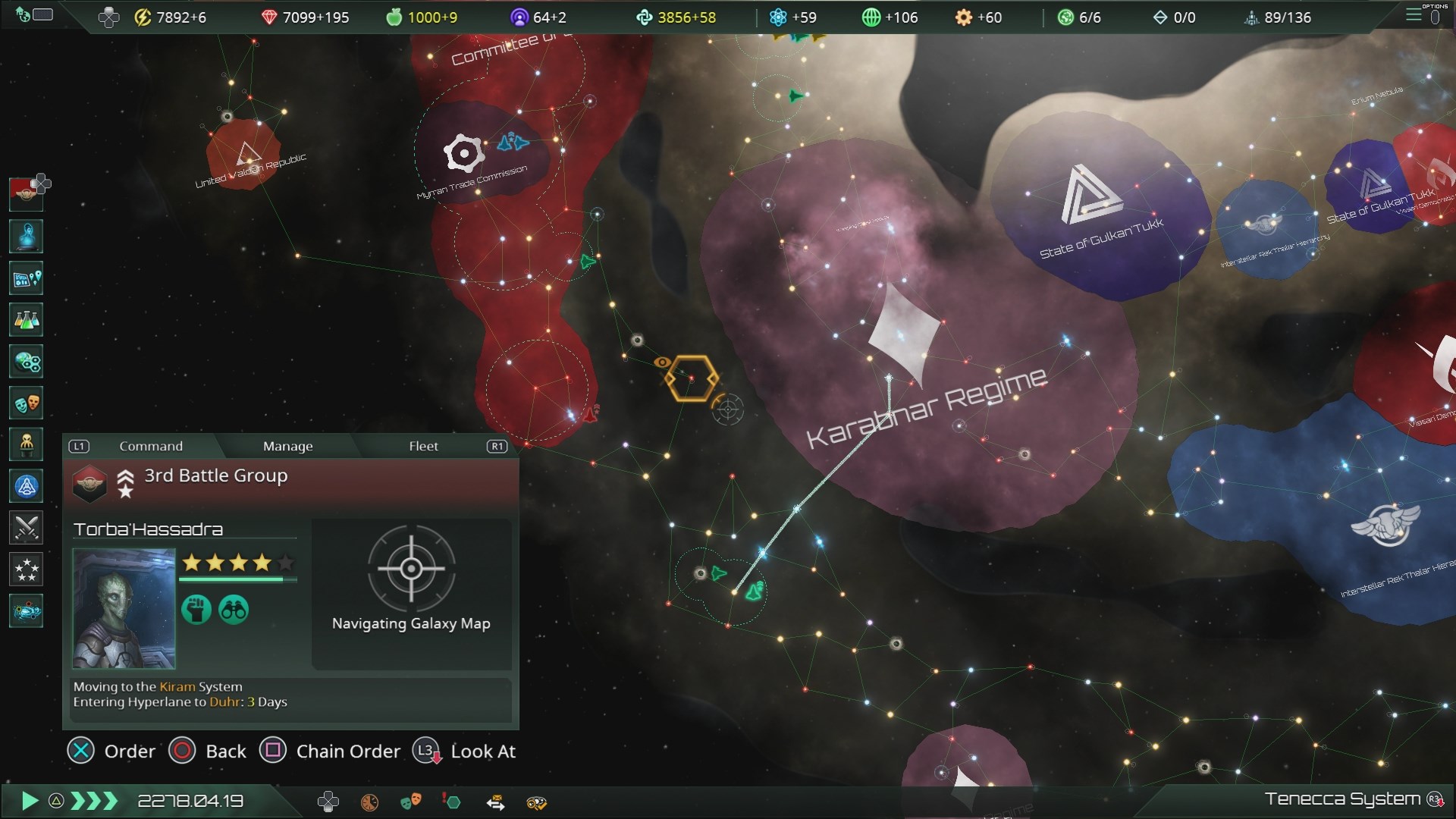 Even with the help of an in-depth tutorial, which can be forgone entirely if that’s what you want to do, Stellaris’ basic gameplay loop is a lot to cover. It’s not easy to run a burgeoning empire, but the game gives you the tools necessary to spread your influence. As such, there are four menus hotkeyed to the directional pad that you’ll find useful.

Your resources at a glance. Energy credits, minerals, food, influence, and unity are gained on a monthly basis. Your goal is to always have positive growth.

Energy credits are your currency, but is also expended monthly on maintaining your stations, ships, buildings and the like. Minerals are used to construct ships, stations, and other planetary buildings. Food is used to feed your pops and having a surplus results in population growth. Influence is spent to enact edits, recruit leaders, and deal with factions and other alien races. Unity is used to unlock new traditions, which effects the cost of different tasks as well as the options you have when dealing with other species.

The bar also displays your reserves of physics, society, and engineering, which are used to fund research.

This is where you command your ships and easily access your homeworlds. The civilian ships are used to expand your world. Science ships can survey star systems and perform important research. Colony ships will create new homeworlds on viable planets and construction ships build stations that will orbit star systems and harvest resources for you. You can also have a number of military fleets, which can be commanded to attack other space-faring vessels you encounter.

Combat in Stellaris is automatic and so long as your fleet has the larger fire power, you should be fine. Fire power can be increased by upgrading your ships and by recruiting powerful military leaders.

This menu allows you to quickly navigate between items that need your attention. An alert will be created whenever a task is completed or when your units are under attack, so it would behoove you to pay attention to these.

This is the bulk of Stellaris’ menus and also where most of the fine print type details are hashed out. I personally don’t like this level of micromanagement, but fortunately it’s not entirely necessary to affect a leader’s re-election campaign or decide what edicts to enact unless you really want to. For those who love the nitty gritty details, this will be the place you’ll be able to tailor your population’s beliefs, values, hopes, and dreams. 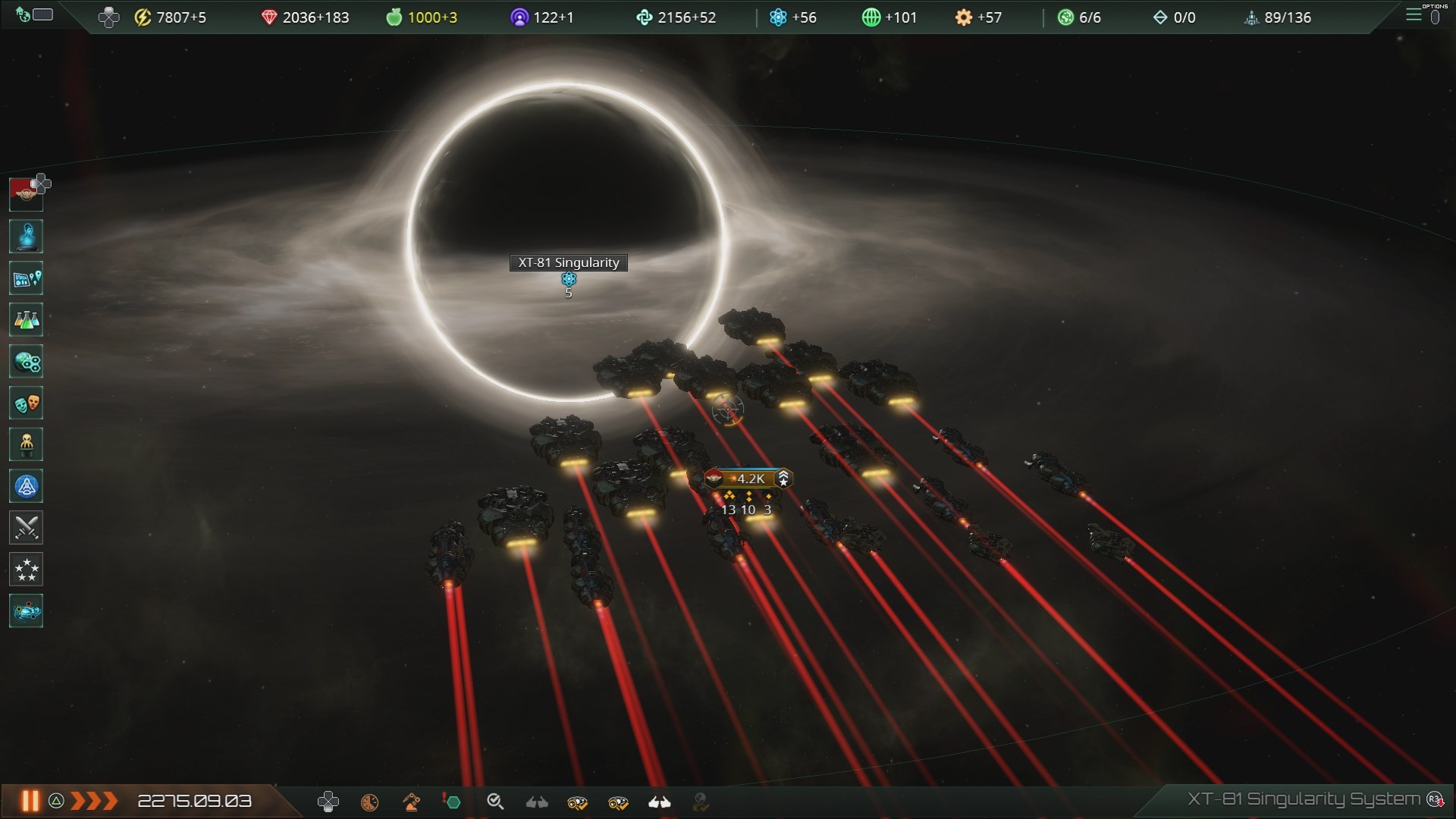 In order to expand your borders,  you’ll need to dispatch science ships to survey neighbouring star systems. Doing so will reveal habitable planets as well as deposits of all important resources,  which will then go towards expanding your empire. As this cycle continues, you’ll also run into other empires–the amount of which will depend on your in-game settings–which you can go to war with, start a peaceful alliance, open trade, or even enslave them to pad out your working Pops.​ ​Additionally, you’ll need to touch down on planets you’ve colonized and manage your populace. Planets are divided into tiles, the number of which are dictated by planet size. The majority of resources will be produced by building facilities capable of harvesting them and assigning populations, known simply as Pops, to work in them. If you have a spaceport built, you can produce more ships. Planets are also where you can maintain your armies and other planetary defenses.

​Stellaris isn’t what I’d consider visually stunning due to the scale at which the game unfolds. Character portraits are hand drawn and detailed, albeit rarely on-screen for more than seconds at a time and the 3D models of your ships are cool, but better viewed in the spaceship editor than in action. The most up close and personal view possible is still pretty zoomed out, but watching two squads open fire on each other is still really exciting. The soundtrack is /stellar/–the kind of soaring, orchestral tracks conductive to space tasks of any sort.

I have mixed feelings about Stellaris. On one hand, there’s a ton of things to do and a variety of ways to approach those tasks. On the other, there’s so much micromanagement needed that it gets tedious and overwhelming. It’s good, but there are some quality of life improvements that could make it great.

As a fan of 4x titles, I found the learning curve wasn’t too sharp, but I could see where the game would frustrate and confuse a newbie. There’s just so much here and a few hours in, you’ll have only scratched the surface. To some, this may be off putting and to others, this may be a game you can really sink your teeth into. Wherever you end up falling on the scale, Stellaris is a game with almost limitless replay value, so you’ll definitely get your money’s worth. If you can look past the game’s flaws and are willing to sink hours into galactic conquest, you’re in for a good time.

Take to the stars in this galactic 4x game–now on console!