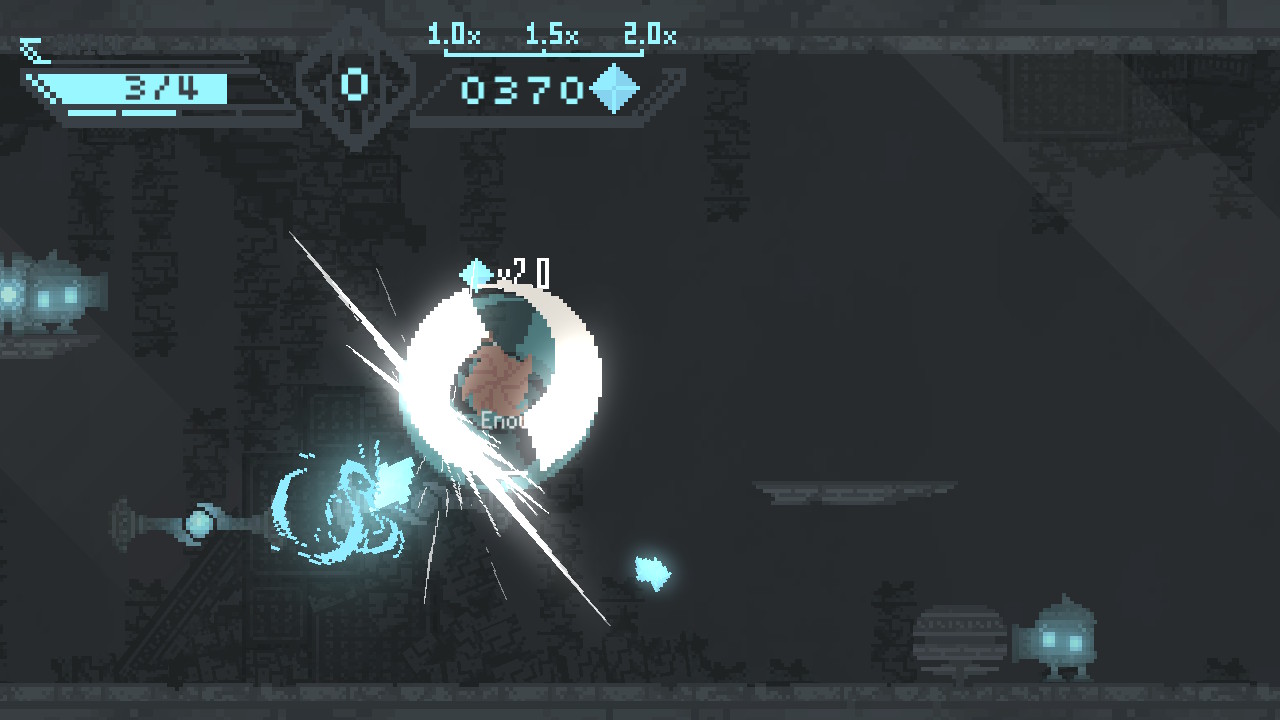 Full disclosure, I was totally skeptical and negatively influenced when I picked up Rotating Brave. From the very beginning, I was put off by what I saw to be a gimmick game, and one that both was not exclusive to the Switch and also sort of pointless in a grander scheme. For anyone looking upon this game from the outside, it just looks sort of like a Downwell-inspired pixel game with a few extra steps. While I suppose there is a case to be made for that argument, Rotating Brave does several extra things to make sure this odd title keeps it fresh, interesting, and, above all, addicting. Additionally, I’m having a hard time seeing how this game from TissueTube could exist and function on the same level on a smartphone, but, then again, I’m more of a tactile player anyways, so buttons it is.

There is a story to Rotating Brave, and it’s kind of, sort of told in a series of memories that you can find between levels, as well as some exposition that you find in the game’s description. Basically, you’re a nameless dude, a soldier in a forever war with an unknown country, and your country decides to harness the powers of some mystica shrine in order to put an end to things. A bunch of shrine maidens are gathered up to help pray and focus the power, and, good news, one of those maidens is your childhood friend. Then a massive energy was unleashed from the shrine (yay!) and was directionless and indiscriminate with its destruction (boo) and now you’re the only one left alive (yay?). So, what else is a lone survivor to do but to journey back into the shrine to try and find his friend? Here we go, off into a certain death sort of deal! 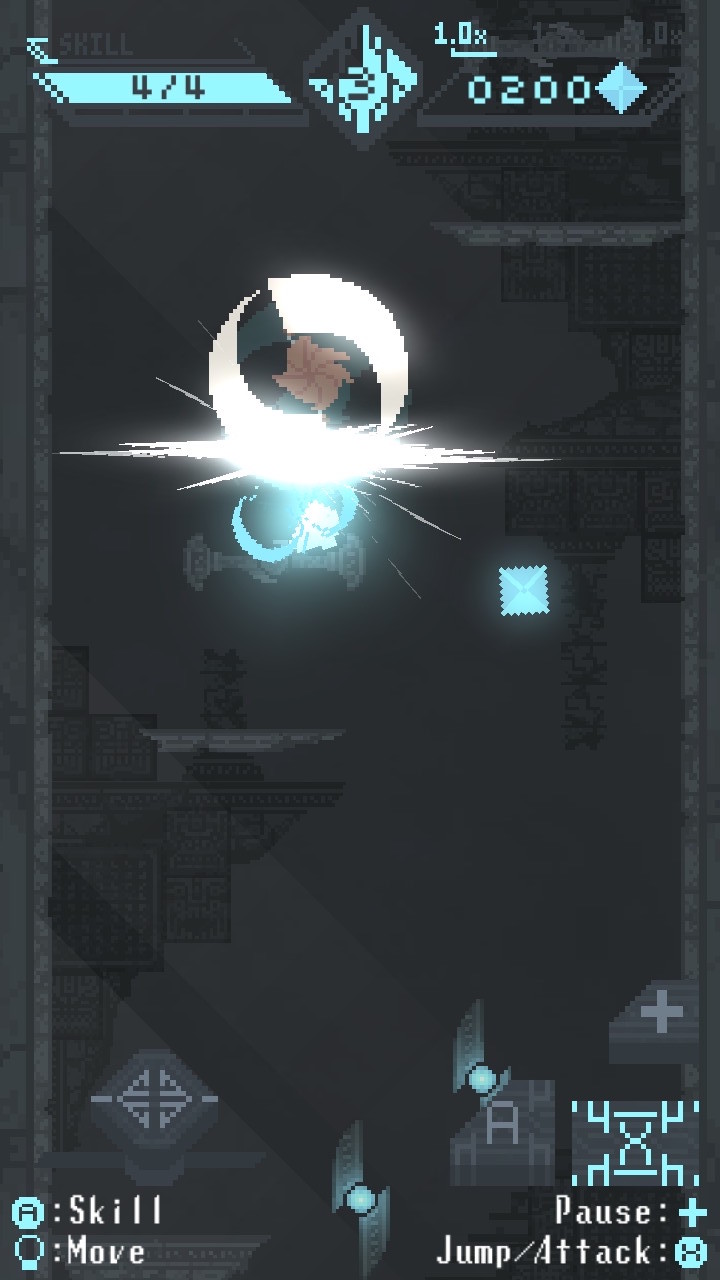 Rotating Brave lives up to its name, immediately raising my initial ire by disallowing you to play the game in docked mode. Seriously, we have a Switch for a reason, and it’s to enjoy the best of both worlds. Still, I can understand why you’re not allowed to play it up on the big screen, because you are asked, at the start of each stage, to change the orientation of your Switch. You’ll be playing from all sides, holding your Switch at a multitude of angles in order to get through the different levels. I’m inclined to advise you that, for posterity of your device and sanity, please make sure to play this game undocked with the JoyCons free and something to help prop up your device. We don’t really have a great vertical stand option just yet (the FlipGrip is great but not ideal for how much you need to rotate this game) and putting the pressure on a single JoyCon to keep the device fully upright seems strenuous. Basically, the biggest problem with this game is the way that it’s played, and you seriously need to consider some save avenues if you want to get the most out of it.

That being said, the actual gameplay of Rotating Brave is pretty cool. Your jump button is also your attack button, and you have a skill that you can use after you successfully charge it by killing bad guys. Killing enemies also nets you shiny gems, which allow you to buy power ups at random stores throughout your run. Much like Downwell, you’re reliant on a “charging” system for your attacks, where you need to touch ground in order to reset your attack counter, effectively making sure you aren’t just a dervish of pain throughout the whole game. However, you also cannot just keep the chain going by killing enemies, so there’s an inherent cooldown built-in to keep the game from going too fast. Power ups like “heal two health between each level” or “enemies explode when they die” become some of your favorites, while “bigger attack radius but fewer attacks” still leave me wondering why. You don’t care how far you can hit, as long as you can hit as much as possible. The further you get in the game, the tougher the enemies that you encounter become, culminating in a handful of boss fights in the totality of the game.

I wa seriously hooked on how well the game can pull you in and keep you going. A full run, a successful one, takes under a half hour from start to finish with some good boss fights in-between. I learned to love the vertical levels (particularly ascending) and dread the horizontal ones, because of how the game’s mechanics port order into this level. Since the jump and the attack are the same button (and, with the right power up, happen at the same time), anything where you can just keep jumping and staying alive is ideal. The horizontal levels break this up too much, asking you to run around, double back, dodge more than hit and really decimate your flow. Comparatively, looking forward to glowing blue platforms to slingshot you higher and higher while you annihilate anything in your way (and, with the attract powerup, becoming flush with gems), is a super fun and exciting way to feel like you’re making progress. 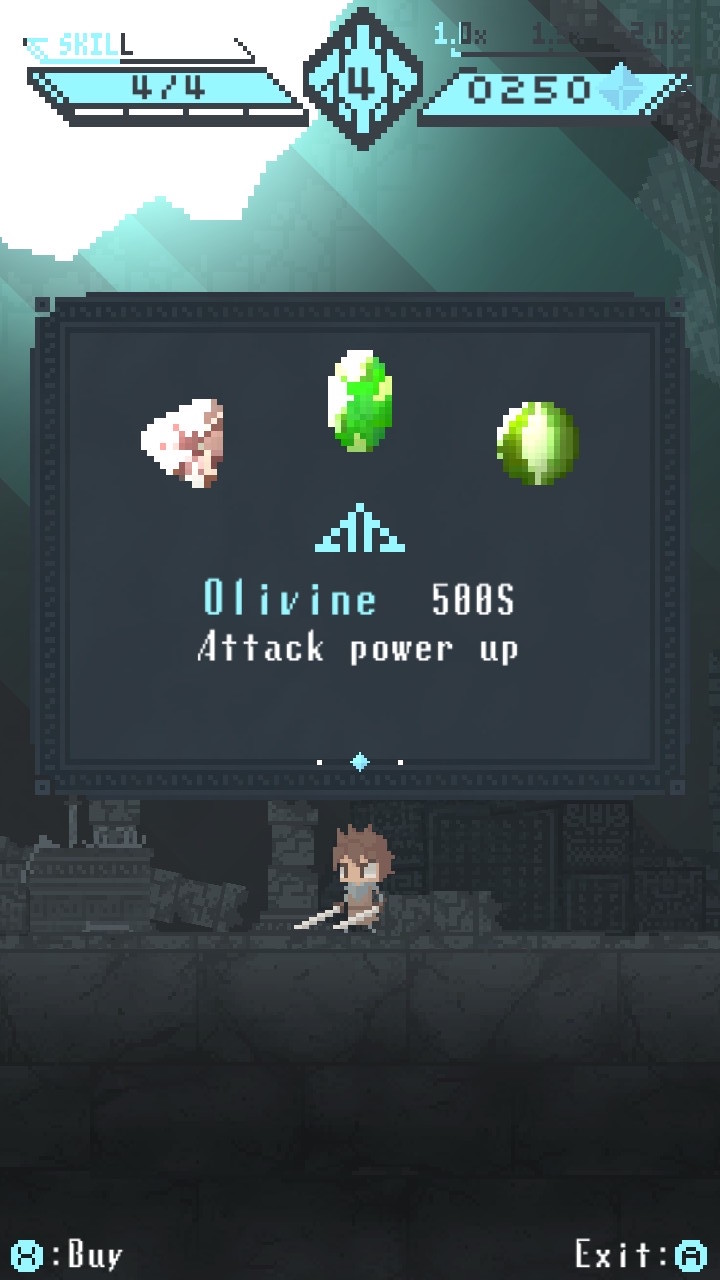 The aesthetic of Rotating Brave is what really helps it sing and shine. Yes, the pixel art is a bit chunky, but it works especially well in comparing the human, soft version of our hero with these blue, almost robotic enemies that spawn every which way but loose. The lighting and the shadows of each stage really convey the crumbling temple that you’ve foolishly flung yourself into, and finding inviting doorways of light where you can hopefully purchase more upgrades become a welcome sign and a sigh of relief. This is all while a repetitive, but appropriate, soundtrack of chimes, strings and drums beats a relentless rhythm to your forward motion, whether it be up, down or to the side. It captures the drive of the game really well, changing up when you enter into the aforementioned sanctuary rooms (becoming appropriately more serene) and when the bosses appear (directing more tension, though the first boss is silly easy).

Overall, this is something where people who have played Downwell will see a massive number of overlaps and may or may not be annoyed with the liberty of lifting such mechanics. The advancing health bar when you get too many heals, the power ups being (in some cases) direct copies of the game, and the attack system, while melee instead of ranged, being a bit too close to home. But there’s enough in Rotating Brave to keep it original and in its own lane. I liked it a lot, and ended up playing again and again to unlock new skills to use and to find the right set of power ups to rip through the game in record time. It’s still concerning to me that we don’t have a good stand option to play this game more safely, but that’s not on the developers. If you don’t mind having to constantly keep adjusting your grip, there’s plenty of goodness in Rotating Brave to keep you completely engaged.

While a bit cumbersome in physical handling, Rotating Brave does an excellent job of bringing a good mobile title to the Switch and being exciting to boot.