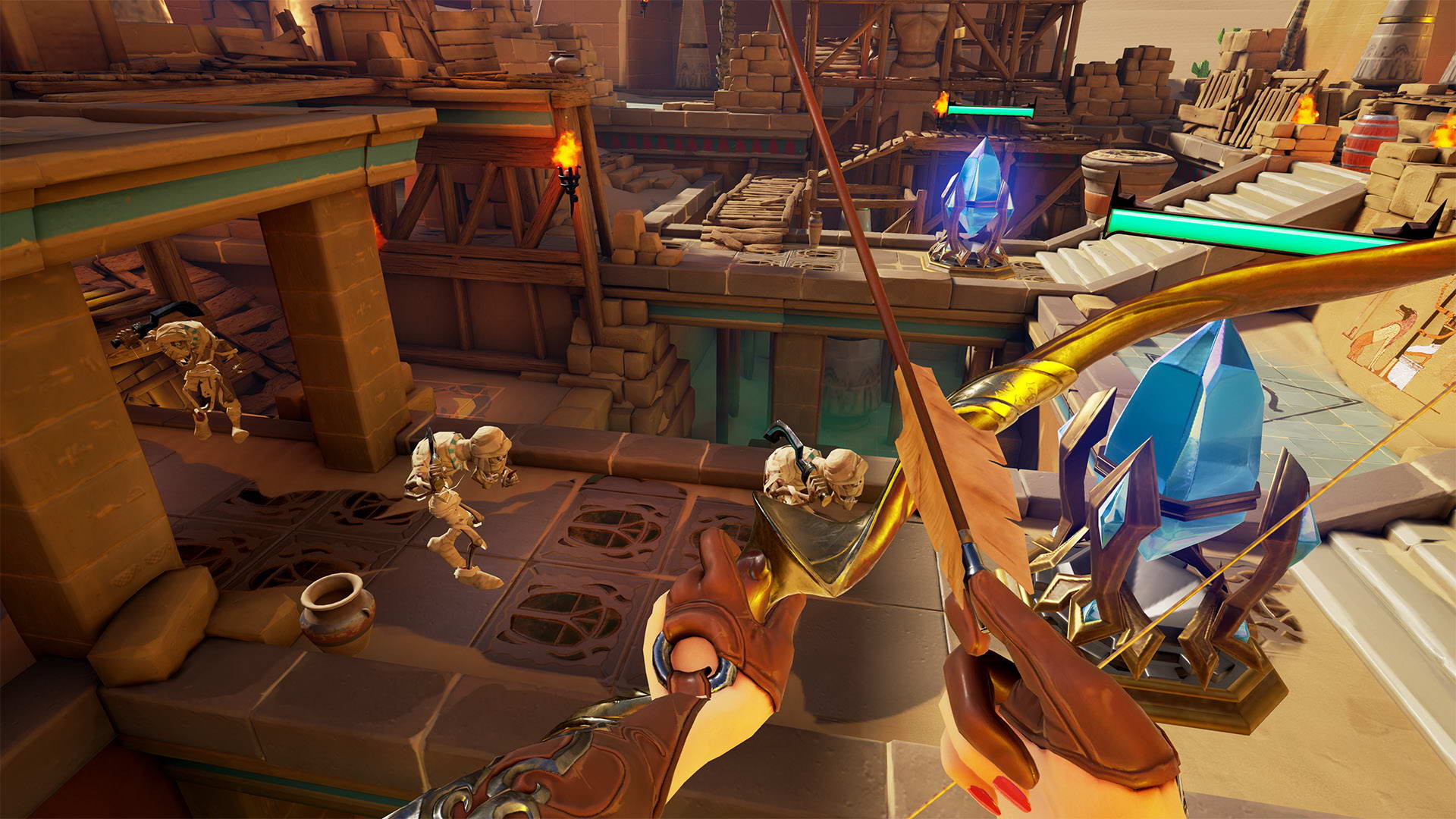 Before I dive into this long-awaited review of Ancient Amuletor, I have to declare something of a special interest.  You see,  Ancient Amuletor is my first full blown PSVR game.  Yes,  I’ve dipped into tons of demos and sampled a few levels here and there.  But this was my first full VR game that I’ve played for some 4 or 5 hours.  So, as you read this review,  you’ll probably detect an air of wonder that I still have for what VR has done for gaming and gamers worldwide. Ok,  enough of the sentimental mush you’re thinking.  What about the game?  Well,  here’s the skinny:  Ancient Amuletor is a tower defense game made by Trouble Maker Interactive Games (TI Games). As a tower defense title,  the premise is pretty standard;  you have a number of huge crystals that you have to defend from an invading army.  There’s very little in the way of plot as there’s no back story, voice acting or even commentary as you make your way through the levels. The game, however, is set in a magical world that has borrowed architectural designs from ancient Rome and Egypt.  You get to choose one of four heroes – in this case Amuletors – which include a gunslinger,  a mage, a puppet master and an archer.

Each hero has their own unique set of skills and controls and it’ll be up to you to decide which feels more natural for the way you play.  While playing through Ancient Amuletor I was pleased to find that TI Games had included the ability to switch characters mid-game, which effectively means you can change weapons and special abilities to match the situation on the battle ground. Excellent. As this is a PSVR offering, you will need a VR headset to play Ancient Amuletor and also two wands. Your controller will be of no use in this game. With the two wands, you get to use both hands to shoot a bow and arrow, wield mini shotguns, cast spells and control puppets.  There is an element of Wii-type physicality to the game as you’ll be required to reload weapons by flicking your wrists up and down or drawing back an arrow while also holding a bow and trying to aim. You get the picture. 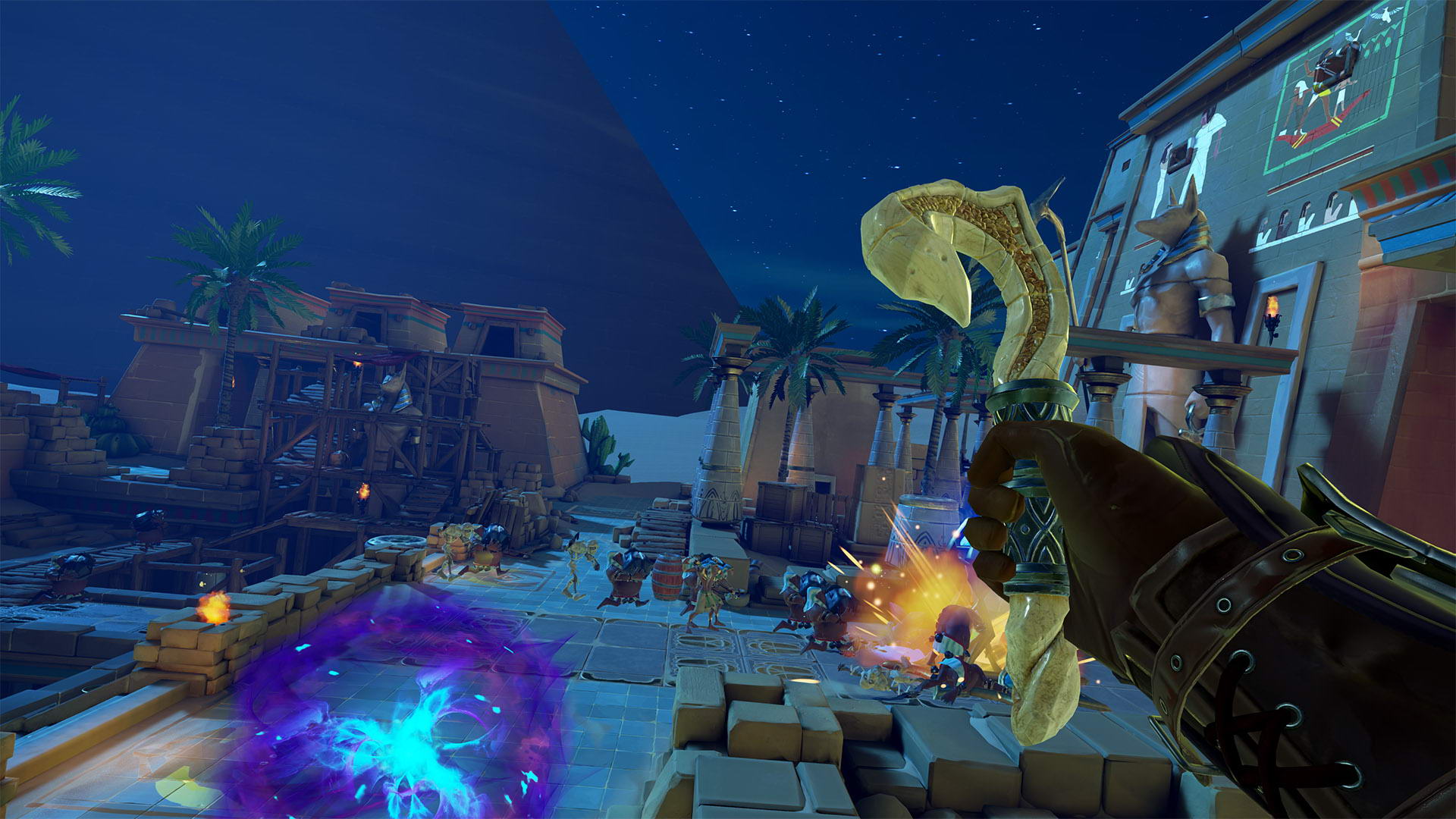 A neat touch in Ancient Amuletor is the ability to teleport from one vantage point to another as you try to find the best location to use while aiming at the enemies below. For us PSVR newbies, this was something of a god-send as the limited mobility meant virtually no motion sickness.  If you’ve sat through Resident Evil 7 Biohazard or even the majestic Wipeout PSVR, you’ll appreciate how important this is.

Luckily Ancient Amuletor has also nailed tracking down to a fine art. While playing through the levels, I encountered virtually no problem with aiming and shooting.

Ancient Amuletor comes with some four maps spread across two themes. This, in effect, means that you’ll get through the game in something close to four hours. But what a ride. Despite the limited number of locations, Ancient Amuletor is surprisingly challenging as you fight off wave after wave of enemies. And then, just when you think it’s safe to take a breath, the boss battle at the end of each level will have you sweating like a runner mid-race.  Honestly, some of the bosses – like the stone sphinx – are terrifying to look at in a virtual world.  They weren’t super hard to kill, but they looked spectacular. 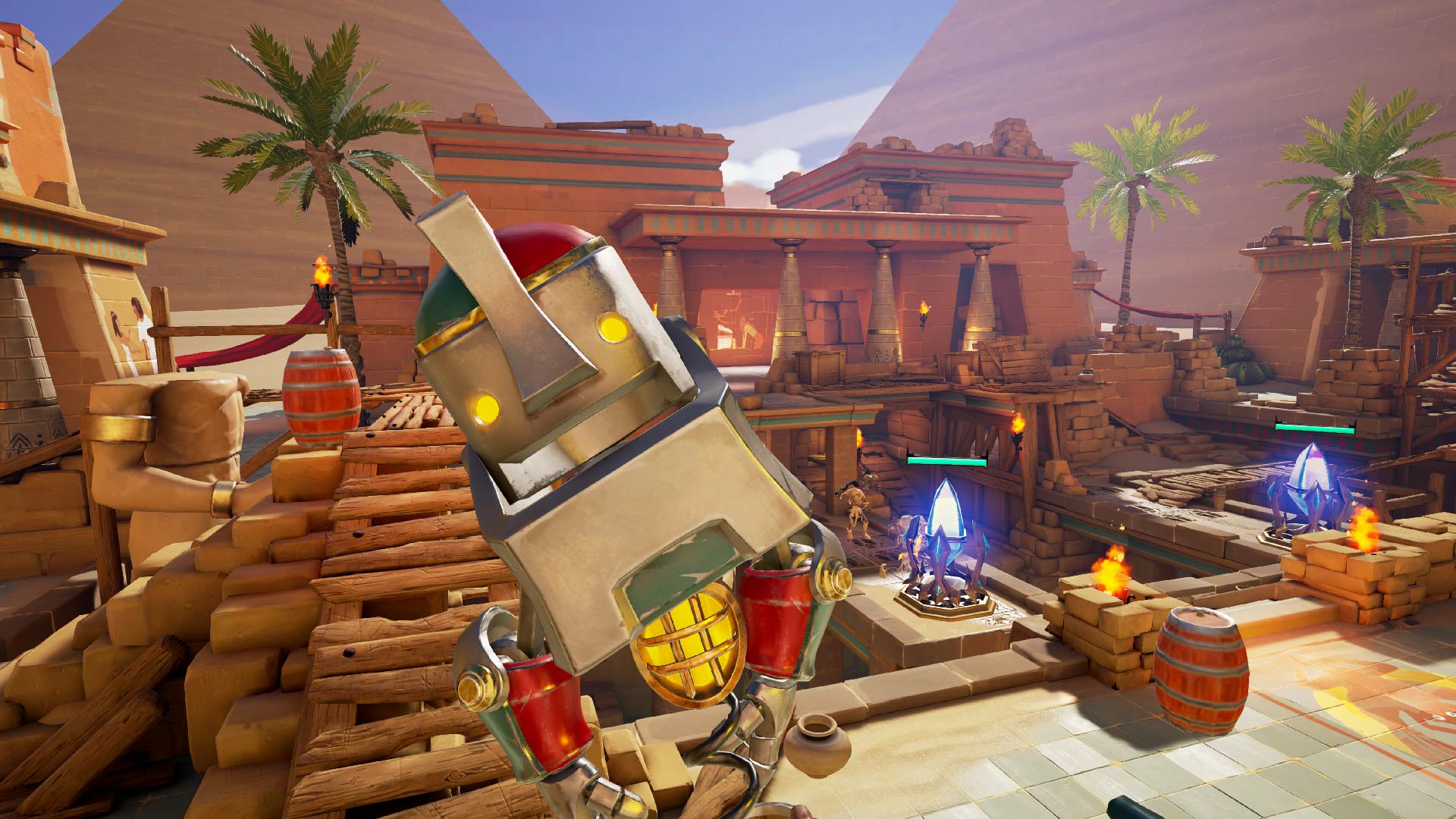 While we’re talking about looks,  Ancient Amuletor’s graphics are sharper than a surgeon’s scalpel. The game’s Unreal Engine has created landscapes that are gorgeously rendered  and eye wateringly colorful.  There is very little distance blur and the characters are well animated. As I mentioned earlier, the locations are inspired by the wonderful architecture of ancient Rome and Greece and there’s a real feel of TimeSplitters here. It’s also worth mentioning that Ancient Amuletor allows you to play co-op with your mates, so you can play as different characters and talk to/shout at each other while protecting your crystals.

If we had any gripes with Ancient Amuletor, it has to be with the limited number of maps available.  Hopefully this will be addressed with the availability of DLC’s in the months to come. Other than that, Ancient Amuletor is a frantic, challenging and rewarding game that will satisfy your Defense Grid craving for a very long time. As a flat screen offering, we would have given this game a 6 out of 10.  In VR though, it’s virtually flawless.

Ancient Amuletor is a frantic, challenging and rewarding game that will satisfy your Defense Grid craving for a very long time.