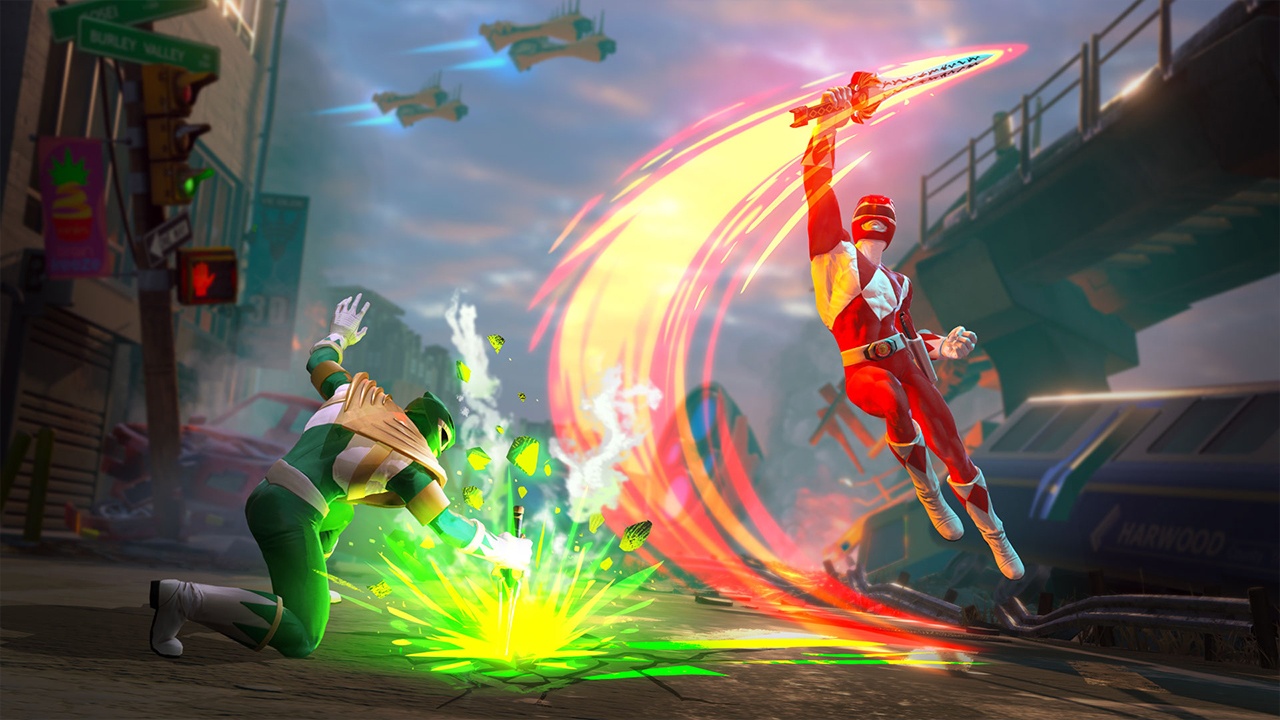 This review starts with a fond future memory of what this game could have been. Power Rangers was something that, when it first got localized to the U.S., had such amazing appeal and interest for little Elliott. Taking the series of Sentai TV shows from Japan, isolating the fight scenes and robot battles and then inter-splicing nonsense plots based around normal school drama was genius, absolute genius. You seriously didn’t even notice that the Red Ranger shrunk close to six inches when he “morphed” into his fighting persona, but whatever, I was in elementary school, everyone was huge. Then the show just kept going the same way that Japan does it every year: remove all the characters, get brand new ones, introduce a thematic twist and keep it going. Much like fans who are surprised that Pokemon is still a thing, there have been, I’m not kidding, twenty-six seasons of Power Rangers sequels, with the current season having just started last month. So when it was announced there would be a fighting game, specifically a three on three 2D fighting game with hilarious combinations based around the Power Rangers universe, I got excited. Everyone got excited, why wouldn’t they?

Power Rangers: Battle for the Grid has a plot, somewhere, but it’s like how fighting games have their plots, with each one somewhat tied to your lead fighter and everything else being conjecture. For example, I picked the Green Ranger (because why the hell not, he’s got a dagger flute, he’s awesome) and then was treated to five stages in a row of fighting with NO explanation whatsoever until the sixth stage. Then I got two lines of vague taunting and that was it. So there isn’t really a story, per say, but think of it more like a proving ground for all the generations of Power Rangers. They’re here to beat the hell out of each other until a certain bad guy notices them, and then they fight the bad guy. In this aspect, the arcade mode is seriously flawed, an aspect we’ll get to in a moment. The game works best, when it comes to making stuff work logically, when simply played online or against friends in local combat, where the only justification is “I wanna punch the Red Ranger right in the jaw” or “the Ranger Slayer ain’t got nothing on me.” Oh, are you not aware of the Ranger Slayer? The alt world Pink Power Ranger who is secretly brainwashed and serves Lord Drakkon, who is an alt world version of the Green Ranger? Again, important stuff we’ll get to in a moment. 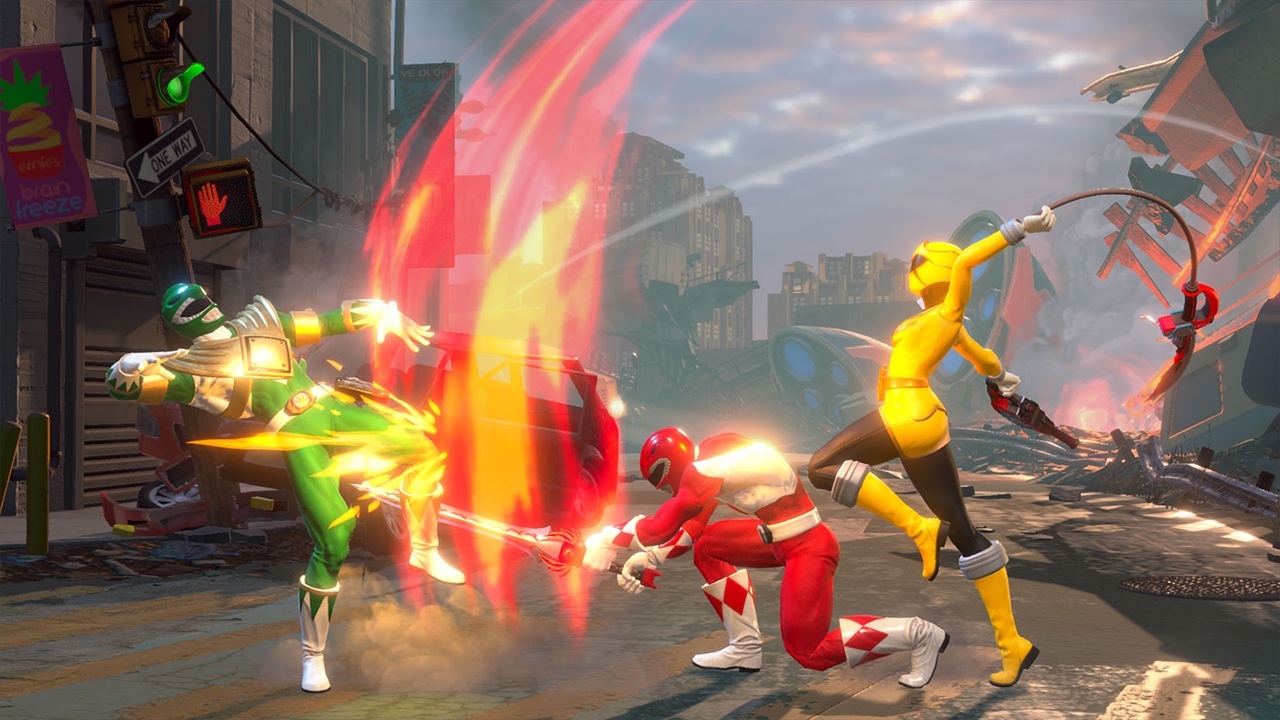 In terms of gameplay, the fighting elements of Power Rangers: Battle for the Grid are solid, straight up, and I admire Lionsgate/Hasbro for getting it right. You’ve got a three on three fighter, with the ability to swap in your support fighters as either additional attackers or as replacements for your primary. Attacks come in the form of light and heavy, with a “special” attack button that mimics certain cool effects (shooting bolts of energy, speed rush attack, etc.). Your Rangers have a super meter that builds up at the bottom, allowing for extra dimensions of attacks when they’re filled up enough, from doing more dramatic and crazy attacks (I summoned a firing squad at one point?) to the ultimate incarnation, summoning your ‘Zord. The summon is such a bananas move that it has to be seen to be believed, but you basically use up all your energy to get a massive, offscreen robot to smash into the battlefield multiple times and lash out with tooth, tail and sword. Getting one Ranger knocked out still leaves you with two more health bars before the match is over, and everything is single elimination: once everyone’s down, the other person is the champ.

Being able to fight as a Power Ranger, especially working with other, cross generational characters is a lot of fun, straight up. The moves that’ve been incorporated are both logical to the fighting scene and logical to the characters themselves. For example, having Gia Moran (the Megaforce Yellow Ranger) means having this cool blend of ranged attacks from her pistol and sweet melee strikes from her blade. The Green Ranger can both fire concentrated energy blasts and, with a full super meter, call upon the Dragonzord to rain missiles down on the enemy. Playing as the bad guys means having a bit of guilty fun, but Lord Drakkon is a serious power house and can do a bit of solo work if you helm him for your three person team. The framework is all here: there’s been inclusion for versus battles, ranked, casual, and training as long as you can get online and find someone to fight against. The game understands that players probably don’t need an elaborate back story or explanation, which is ideal, as the arcade mode is so woefully barebones that it almost doesn’t make sense to have it in the first place. Unless, like me, you just want to occasionally fight and not worry about finding a match online, especially since you seem to always be outside of everyone else’s timezone. 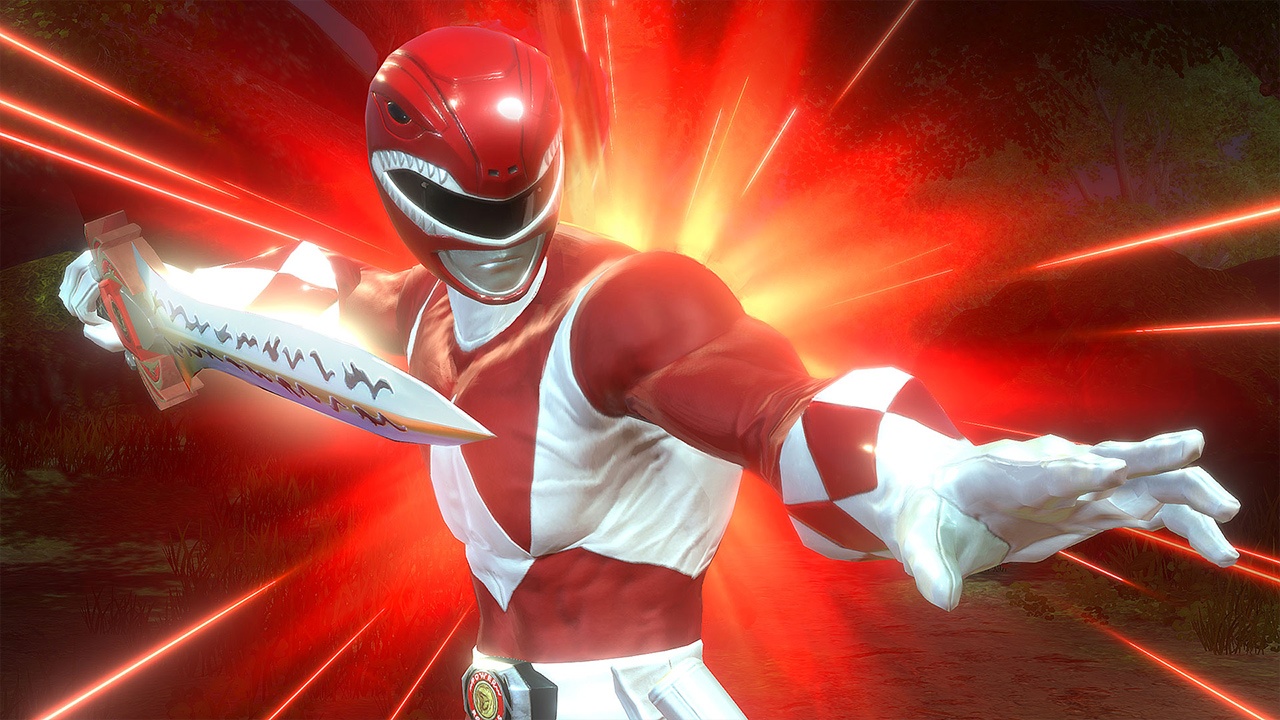 Everything I’ve said up until this point has sounded decent, right? Here’s the rub: that’s all. That’s all there is. Yes, it’s a solid fighting game, but there are a grand total of nine characters in it. Nine. With several seasons having no representation whatsoever, it feels very disjointed and strange to select three characters from the very beginning, three from the comic book, and then three truly random selections from other seasons, including one who isn’t even a Ranger for more than a couple of episodes. This is probably something where the fans voted in a secret poll and this was the result, but I look at the vast potential and see very, very little. And there’s not more waiting: I finished the arcade mode and got some of the most barebones credits I’ve seen since the NES days. There wasn’t even music, just a static picture with names scrolling by and a “thanks for playing” at the end. So you’re left with a fighting game that relies heavily on other people also wanting to play that fighting game and everyone being cool with the very real possibility that you’ll each select one overlapping character. Thankfully, there’s one additional skin per character to help differentiate.

The roadmap for the game is clear. Saban and Hasbro launched Power Rangers: Battle for the Grid at a very reasonable price for what could be considered a valuable IP, but they’ve put almost nothing into it. The season pass (which I did not get) is almost the same price as the base game and currently promises a Red Ranger skin and three more characters “coming soon.” That is terrifying for a prospect, as we see the nine characters chosen and get arguably nervous about what those three could be. I want to believe we’ll get Rita Repulsa or even someone from Mystic Force (which could be absolutely DOPE), but, at this point, I wouldn’t be surprised if it became Bulk in his nightmare costume. This is going to be a game that needs its fans to drive sales in order to justify it becoming something great, but only the serious collectors will be willing to take a chance. For everyone else, this just seems like a cheap gimmick to cash in on teenagers with attitudes.

A decent, affordable fighting game that shows you everything it has in just under 30 minutes.