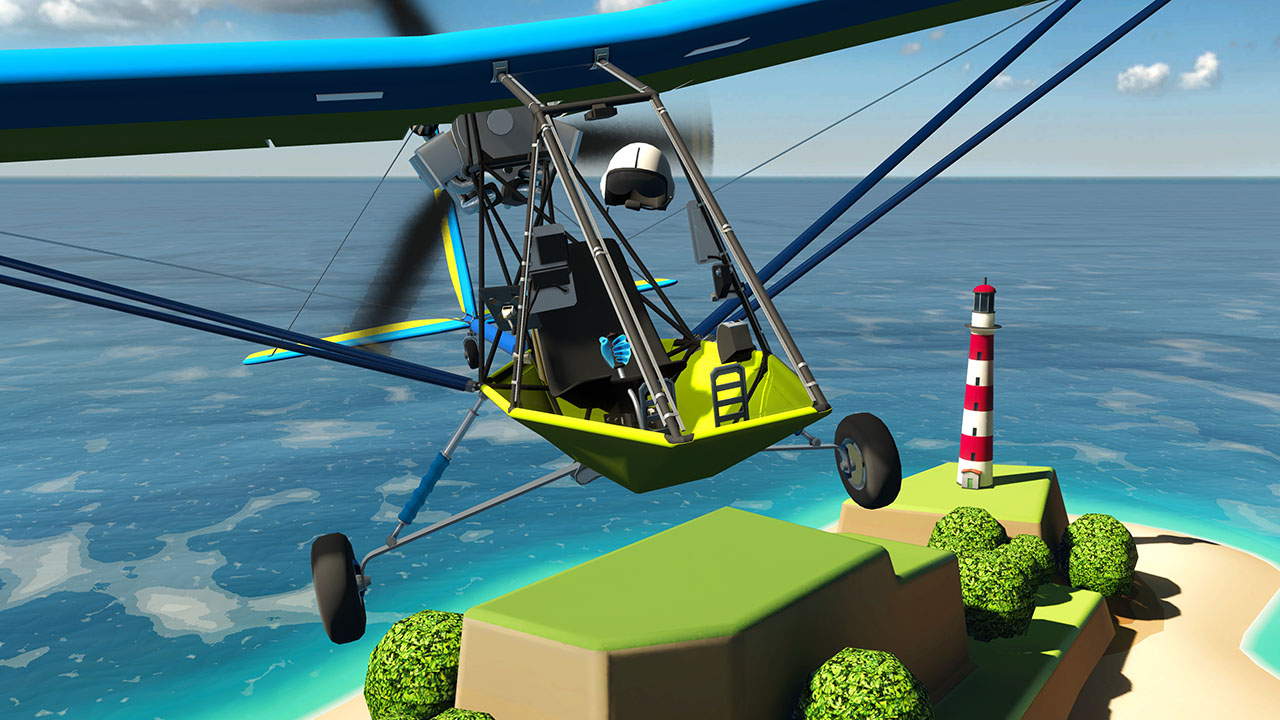 Since it was announced that the franchise of Pilotwings would no longer continue in development, many indie companies  have tried to replicate its formula with their own take on the genre. Over the years, some have been pretty successful in filling that void that so many gamers garner for, while others simply crashed and burned. However, despite some successes, none of them were ever able to climb to the dizzying heights that Nintendo ever reached. Developed and published by Bit Planet Games, Ultrawings is the latest of such titles to try and take the coveted crown of being the Pilotwings successor. But is this latest title a welcome arrival or is it just another game that’s bound for the departure terminal.

The main bulk of the gameplay takes place within the skies above an archipelago of islands. With progressions through a series of tasks or sport-like activities, you unlock up to four varieties of aircraft; the ultralight, the Glidester, the Blade 360 and finally, the Gee Racer. Each of the aircraft have their own distinctive qualities, both in look and how they handle. Your starting aircraft, the Ultralight feels slow and heavy, whilst the Blade 360 is fast and agile. It adds a touch of variety to how you approach each of the tasks given to you within the game. Although this can also lead to some frustrations as some aircraft are better suited to the game than others.

Dotted around the Islands lie a series of activities that must be completed in order to unlock further craft, as well as winning prize money to open up more of the islands by purchasing a series of airports. There’s a nice variety of tasks available here. Firstly, there’s Ring Rush which is your normal premise of flying through a series of pre-determined rings; although there is also an added element of achieving higher scores the closer you are to flying through the epicentre of the circles. There’s also Ring Course which follows a similar pattern of traversing through a set course of rings, although the circumferences are much smaller this time around. The goal here is to, not only hit every ring, but also attain a good level of accuracy with landing your aircraft after completion. 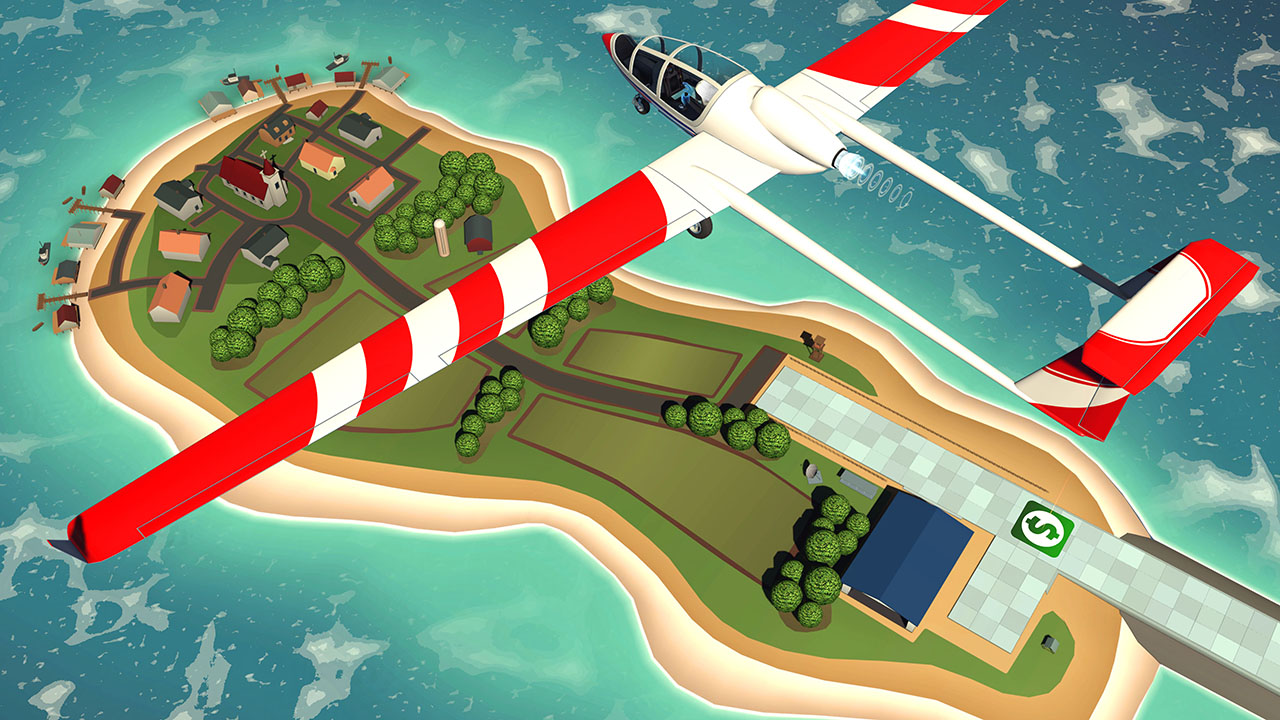 This leads on to the third activity, Landing Challenges. As the name implies, the objective here is to land accurately within a target area; the closer you are to the centre of the target, the higher your reward. Next up is Photo Challenge, my personal favourite. Again, there’s a high level of accuracy here, with your task being to photograph a series of landmarks using your craft’s in-built camera. The other two challenges revolve around the use of balloons in Balloon Pop and the Balloon Course. The first of these involves flying around an arena and shooting a series of balloons with darts, all within the constraints of a time limit, whilst the Balloon Course brings an amalgamation of Balloon Pop and Ring Course, tasking you to fly through a series of rings, whilst shooting the balloons that appear after each ring within a set amount of time.

Lastly, there are also a series of race challenges that sees you flying through a course of rings against AI opponents in order to cross the finish line in first place. This is one the more exciting challenges to partake in, but is also one that is only limited to the Gee Racer aircraft. Each of the tasks rewards you with a bronze, silver or gold award; depending on your performance. The higher your score, the higher your prize money which is used to purchase more planes and airports within the islands. As you begin to open up more options within the islands, the more the game also opens; giving you the option to try out different challenges with different aircraft, something which often rewards you with better scores than were previously won. For instance, the slow and cumbersome Ultralight perfectly suits the photographic and balloon challenges, whilst the Gee Racer suits the more agile tasks of racing against the clock. 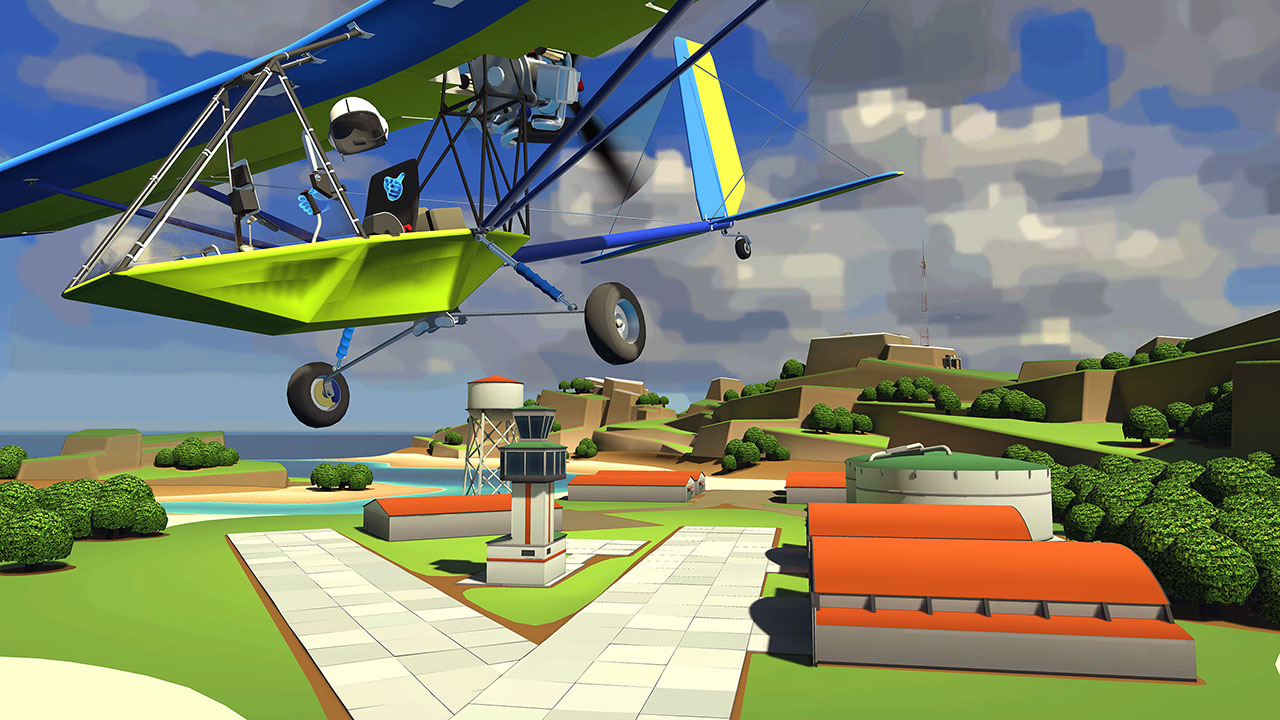 The game also contains a free-flight component which is a good way to get a feel for each aircraft. However, the game also plays in an open-world style; allowing you plenty of opportunity to learn the mechanics of each element and take in the surroundings of each of the islands. Both of these elements become an important aspect of the game, as there is a distinct lack of any navigational help. Exploration is as much of the game as are the activities, as you simply need to find any landmarks or new challenges simply by looking out for them. However, the roots of this title lie firmly within the area of Virtual Reality; the platform for which this game was originally developed. For the most part, the transition from VR to console has been largely successful here, but it still contains a few elements that work much better in a virtual setting rather than a handheld device.

The main viewpoints that the game presents are quite limited; often leading to some awkward camera angling or loss of direction in where you should be heading. There is an option of using gyroscopic movement, which works fine on the Switch, but at the same time, isn’t always an ideal scenario. There are also a couple of technical issues with a few instances of frame-rate struggling and pop-up; but all-in-all, wasn’t anything that broke the deal. As far as aesthetical presentations and control schemes go though, everything here is nicely detailed and bright, with some tight controls that make flying the aircraft a nice experience. You can also switch viewpoints from external to cockpit, as well as an option to switch between arcade or simulation control schemes.

Overall, Ultrawings offers a good alternative to Nintendo’s hallowed Pilotwings, but as with the majority of similar games, is also one that fails to climb above the clouds. It plays a nice game, looks good and offers a relaxing experience in a variety of locales, challenges and aircraft. Its biggest downfall though, is that everything just feels a little flat, both in terms of camera implementations and the actual gameplay itself. In simple terms, it’s a good game, but not a particularly exciting or enthralling one. However, if you’re looking for a title to fill the void that Pilotwings left behind, then this is most definitely a title that will help in filling some of that hole. Just don’t expect it to satisfy your cravings fully.

A good alternative to the now-defunct Pilotwings, but also one that doesn’t quite reach the same dizzying heights as Nintendo’s title.