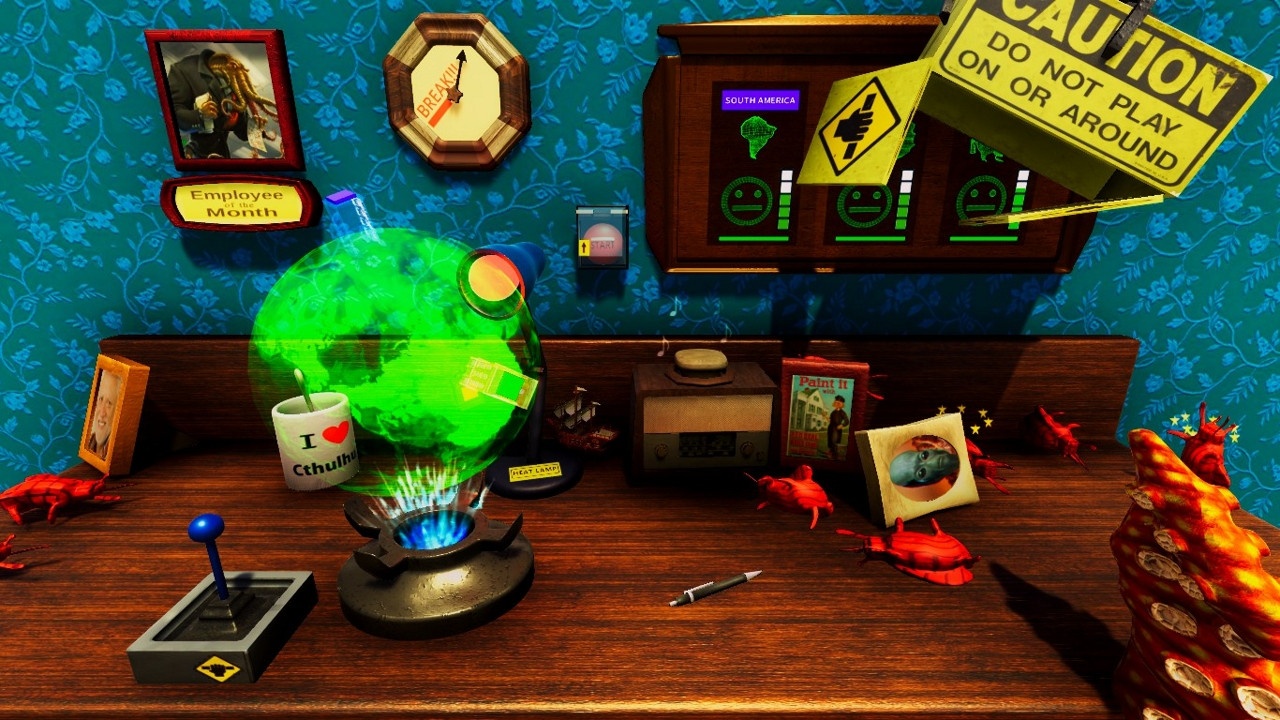 It’s troublesome trying to mirror games like Surgeon Simulator and Goat Simulator – if the balance between frustration and fun isn’t succeeded, you’re left with a confusing mess of bugs. On the surface, Godly Corp is more akin to its predecessors, but pretty soon it becomes bogged down in unfunny moments and frustrating controls.

If you’re a fan of Cthulhu, then Godly Corp is right up your alley. The octopus behemoth has taken up a desk job, swapping the cosmic entity lifestyle for the nine-to-five. Instead of remedial tasks, he spends his days waggling his tentacled arms to stop things overheating, warding off insects or fending off robotic assaults. It’s purposefully confusing, frustrating and silly, but that’s what you expect from a game like this.

Each level revolves around using your tentacle to complete tasks around Cthulhu’s desk, mainly by pulling levers, rotating devices or squeezing peripherals. A globe on the desk represents your aim for each level, often being covered with something that needs interacting with, for example, during one level three crystals need to be sprayed to stop them overheating. If you don’t spray them quickly enough then the level ends, and depending on your progress so far you have to start again. Spraying them involves wrapping your tentacle around a bottle to squeeze. Once squeezed, you then have to pump a lever to fill the bottle back up before you can spray again. Everything happens quickly, so it’s a race against time to unwrap your tentacle and pump the bottle before the crystals overheat. 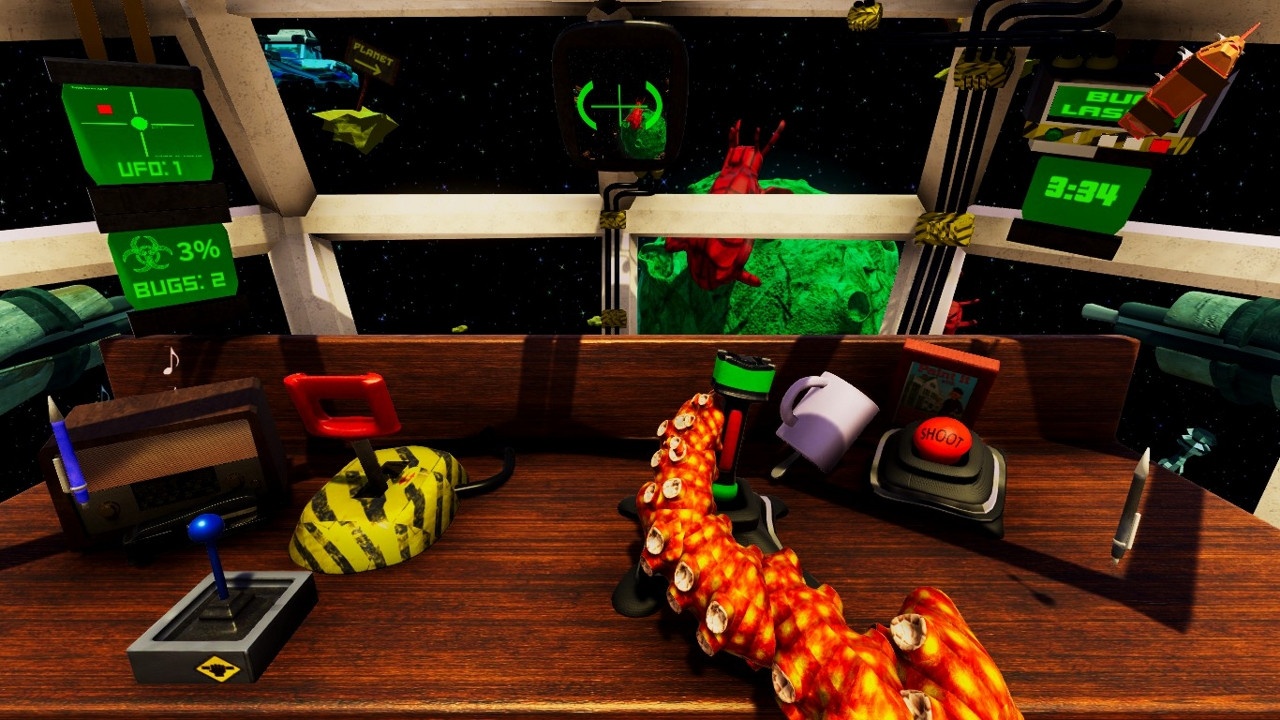 As you can imagine it handles horribly, which is kind of the point. Moving your tentacle is difficult, and when the game requires multitasking it’s hard to unwrap your tentacle from things to then reach another area, so the process requires some practise. Unfortunately, it’s not always that accurate, for example there’s many times I’ve definitely pressed a button and the game hasn’t registered that I have. It’s at times like these that Godly Corp doesn’t own its bugs, but rather lets them hinder the gameplay.

None of the levels are ever a simple case of curing the problem and move on. It’s definitely a multitasking hellscape, and there’s always something that gets in your way and stops you from completing your task. A great example is during one level where a wave of robots try to halt your progress, requiring you to shoot at them with a gun, all whilst trying to complete your mission. It’s this bonkers mix of tasks that make games like Surgeon and Goat Sim so popular and enjoyable, the frantic physics and none-sense are baffling but brilliant.

But Godly Corp rarely achieves any of these feats. At its best, it’s a diversion from better games in the genre with weaker mechanics and an unfunny premise. Bugs are a part of games like these, but Godly Corp is full of issues not caused by waving tentacles and spinning globes. There are times where the game has frozen for well over a minute, leaving my Switch bricked and unusable, leaving me wondering if this was even tested on the console at all. But even when it works, the biggest issue is that it isn’t fun. The premise never moves far from spinning a globe and adjusting settings across the room, so even during its sillier levels, it’s still more of the same. 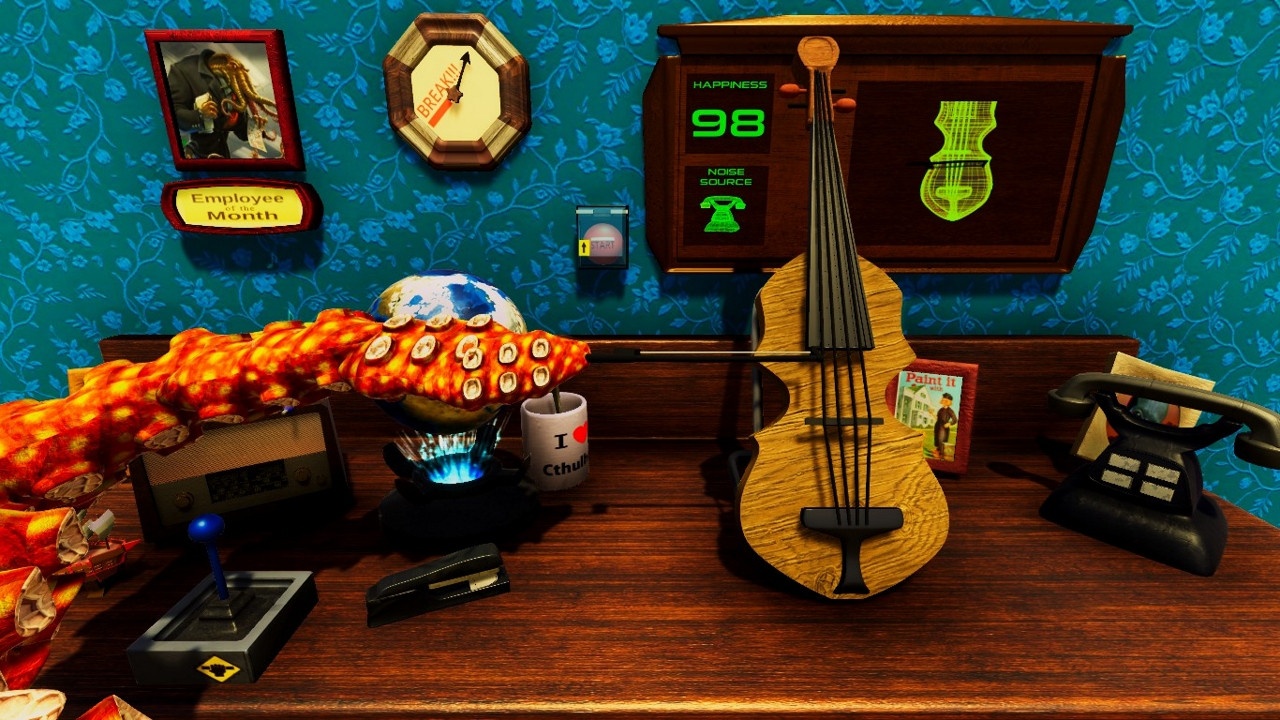 And while the nine-to-five life usually doesn’t move you far from your desk, our octopus overlord really needs to do something to his workspace. The room is full of pictures of dead memes and lazy designs, none of which are funny or add anything to the game. When the room opens up in later levels it does give the game some much-needed breathing space, but by that point you’ll more than likely have given up and moved onto something better.

Godly Corp doesn’t own its bugs, but rather succumbs to them. Its biggest pitfall is thinking it’s funnier than it is, with its commitment to old memes, purposefully poor controls. What makes other titles of this genre fun is that they still have a fair aim that, while frustrating to get to, remains achievable. It’s a great premise, but unfortunately, one that’s poorly executed.

It’s a great premise, but unfortunately, one that’s poorly executed.