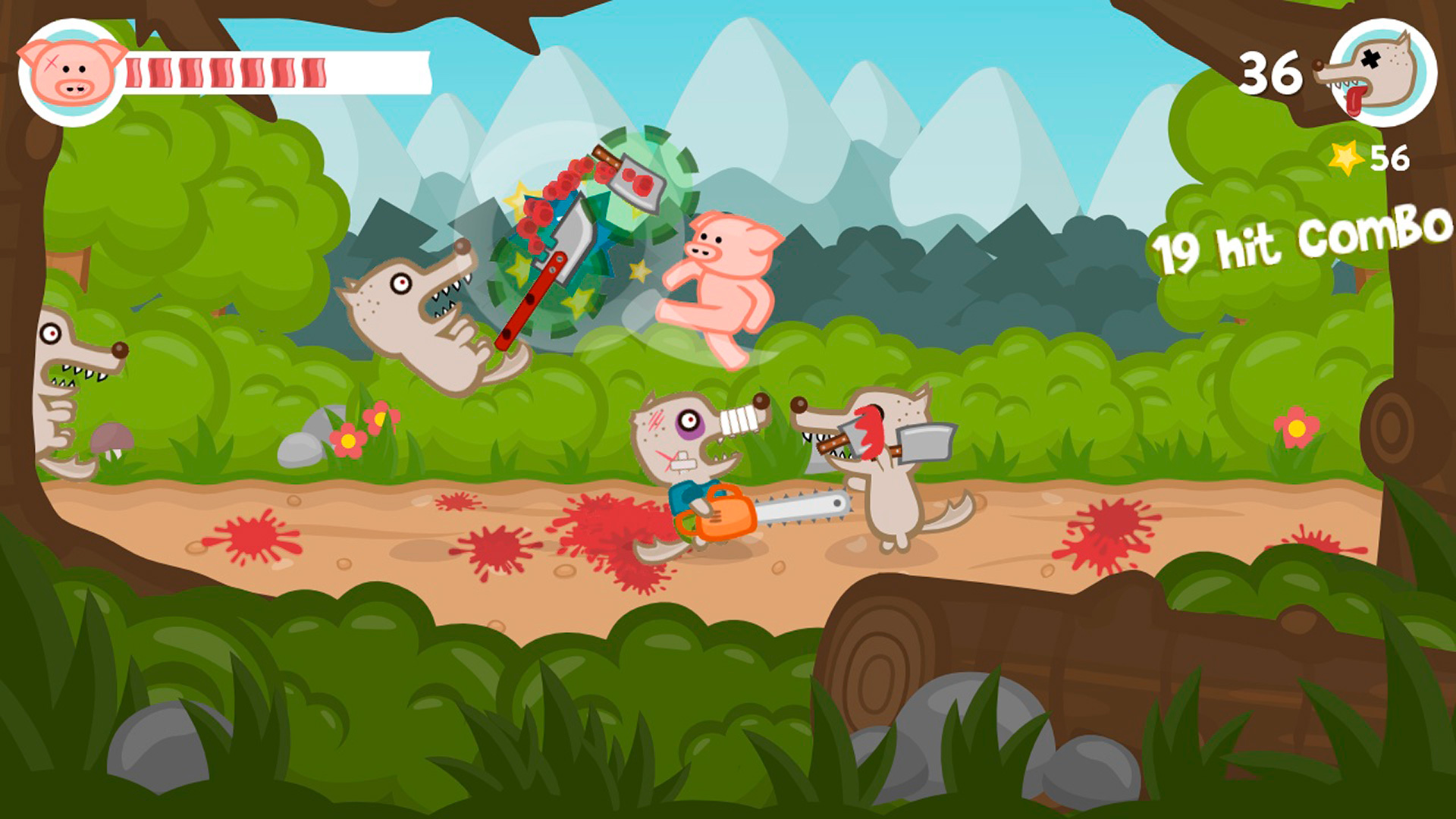 Iron Snout is the latest title from Ratalaika Games and may well be one of their simpler games. As mentioned in earlier reviews, Ratalaika Games are generally one of the easier platinum trophies to acquire, Iron Snout is no exception. So the question is whether Iron Snout is worth playing once the trophies have been added to your collection. You are right to think that Iron Snout is broadly based on the three little pigs/wolf dynamic, as the protagonist is a pig and the enemies are wolves.

You’ll find how basic Iron Snout is from the menu, you can choose what your pig is wearing, which one of the three themed scenes you want to fight in and some very simple settings to toggle. There is also a small selection of modes to choose from: Classic gives you a limited set of lives in the form of bacon, Sudden Death gives you one life, 2P wolfieball and Pig vs 100. Once you’ve selected your pigs attire, you then need to select which themed scenario you would like to kill some wolves in. One theme appears to be forest related, the second is comes across more like a town setting whilst the remaining scene is based on a pirate setting. 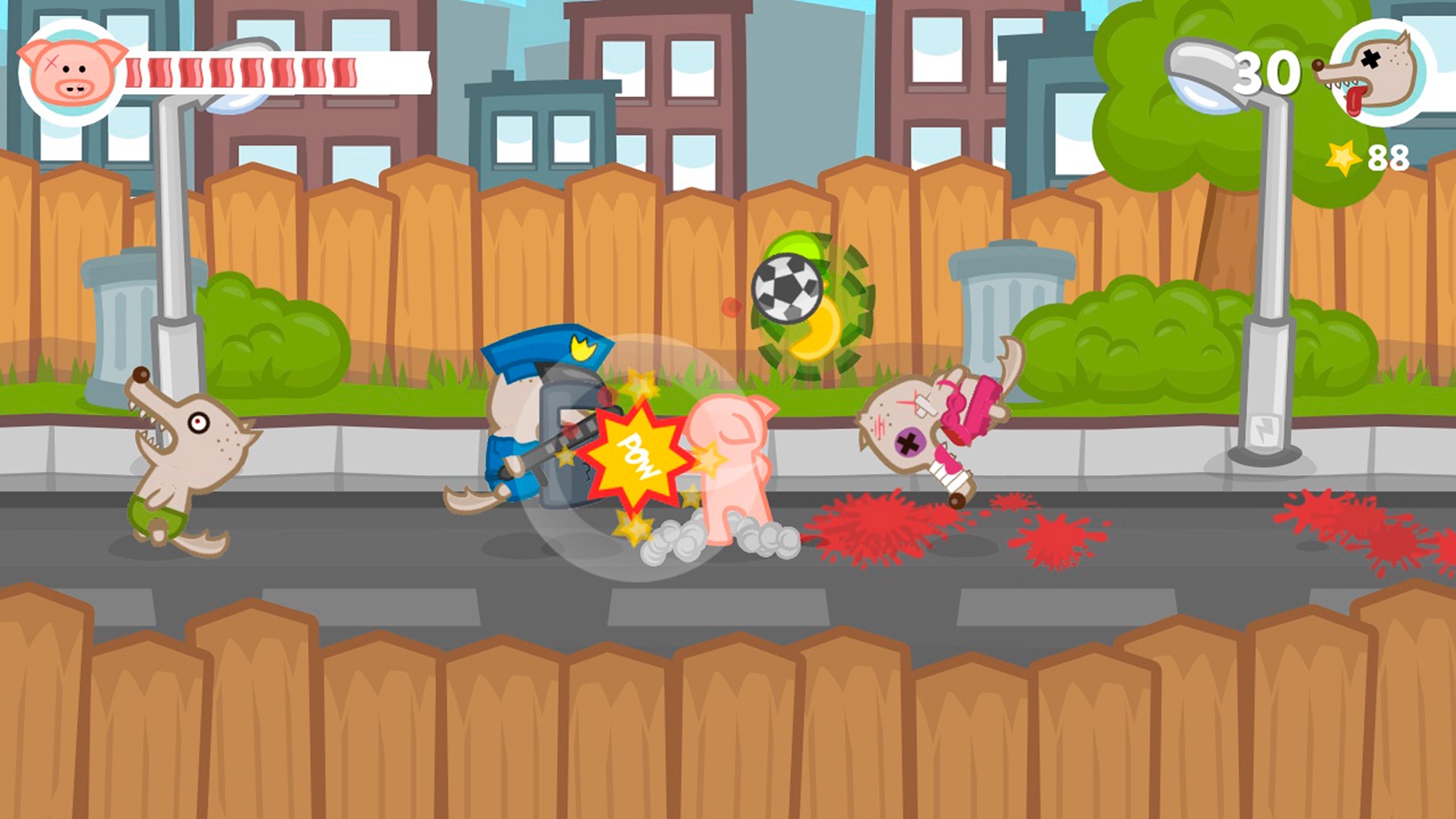 In Iron Snout you need to unlock the extra skins and themed settings, this is done by killing a lot of wolves. You play as a pig who stays centrally in the screen, you can not move left or right but you can jump. Wolves come from both directions and some appear from above. Many carry objects and weapons such as knives, truncheons, spears, hats, skateboards and caps to name just a few. If they hit you then you lose a life, however you can grab the offending item and use it yourself or throw it at an oncoming wolf. Sometimes you have to hit wolves who take an aerial route, such as one enemy rides a rocket, if you don’t hit them whilst they are above you then they come to your level which makes if more difficult to hit.

However should you hit them then the rocket they rode on will kill other wolves. On the pirate themed level there are parrots that carry bombs, if you punch/kick them then they can also be used to kill the army of wolves. To be fair there is good range of enemies across Iron Snout, some thought has been given into their design. While the action is repetitive Iron Snout does deliver on the mayhem stakes. 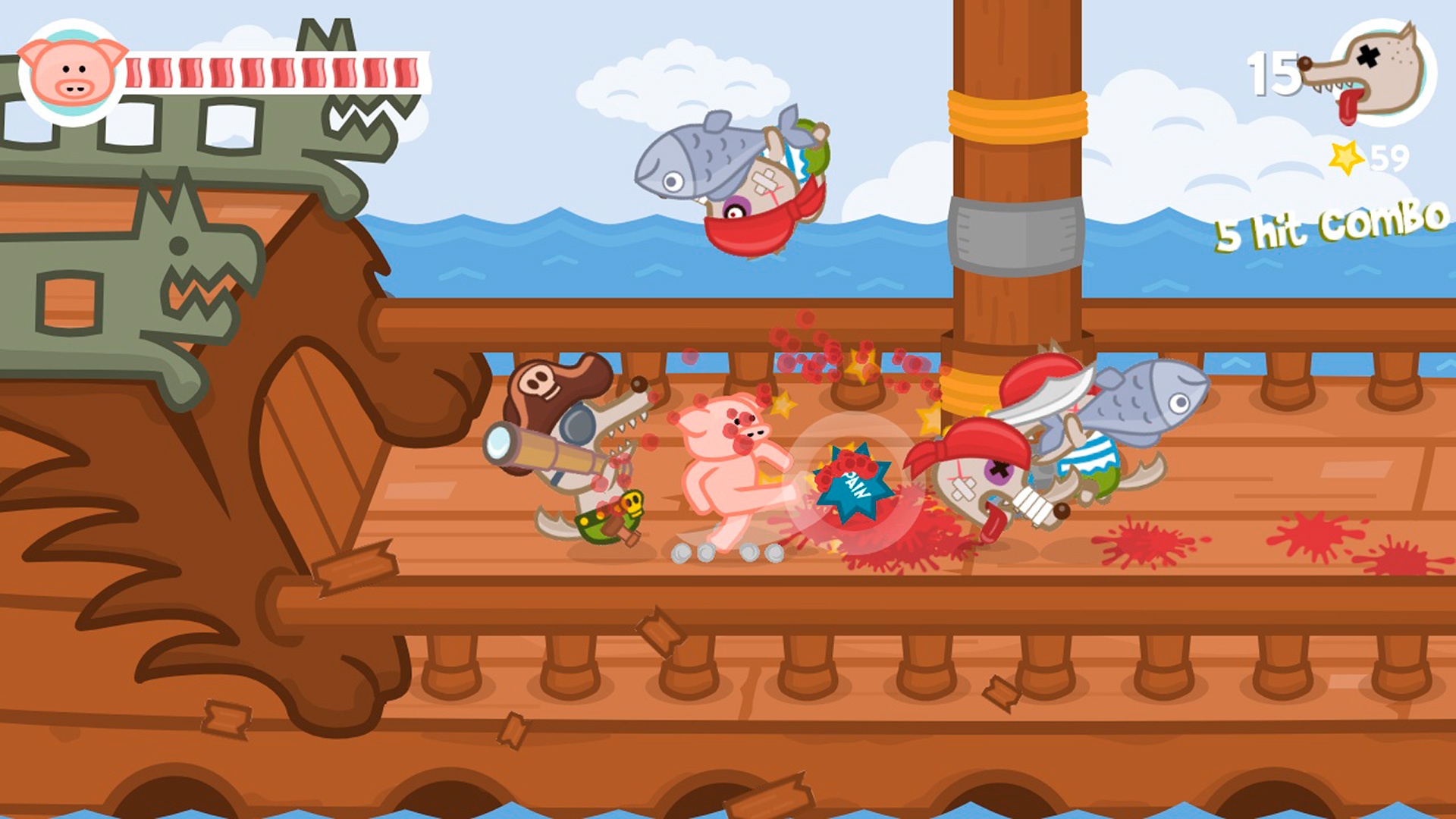 All you do in Iron Snout is punch and kick, you can punch left and right, you can jump to hit things above you and you can jump back down to deliver some pain. Your character does have a limited range of fighting but Iron Snout is more of a mash the buttons randomly strategy rather than taking your time. Iron Snout carries on until you lose all your lives, at this point some statistics are brought up containing information on how many wolves were killed, how many projectiles were caught etc. It doesn’t mean anything long-term but if you’re interested in high scores and beating them then this is what Iron Snout offers.

It’s always an issue when reviewing a game like Iron Snout, a game that could easily be a mini game in a bigger title. There’s always fun to be had with mashing buttons but that kind of mechanic always becomes tiresome if there isn’t anything else to do. Iron Snout is fun for twenty or so minutes but beyond that it’s difficult to recommend it unless you’re an avid trophy hunter.

Iron Snout is fun for twenty or so minutes but beyond that it’s difficult to recommend it unless you’re an avid trophy hunter.