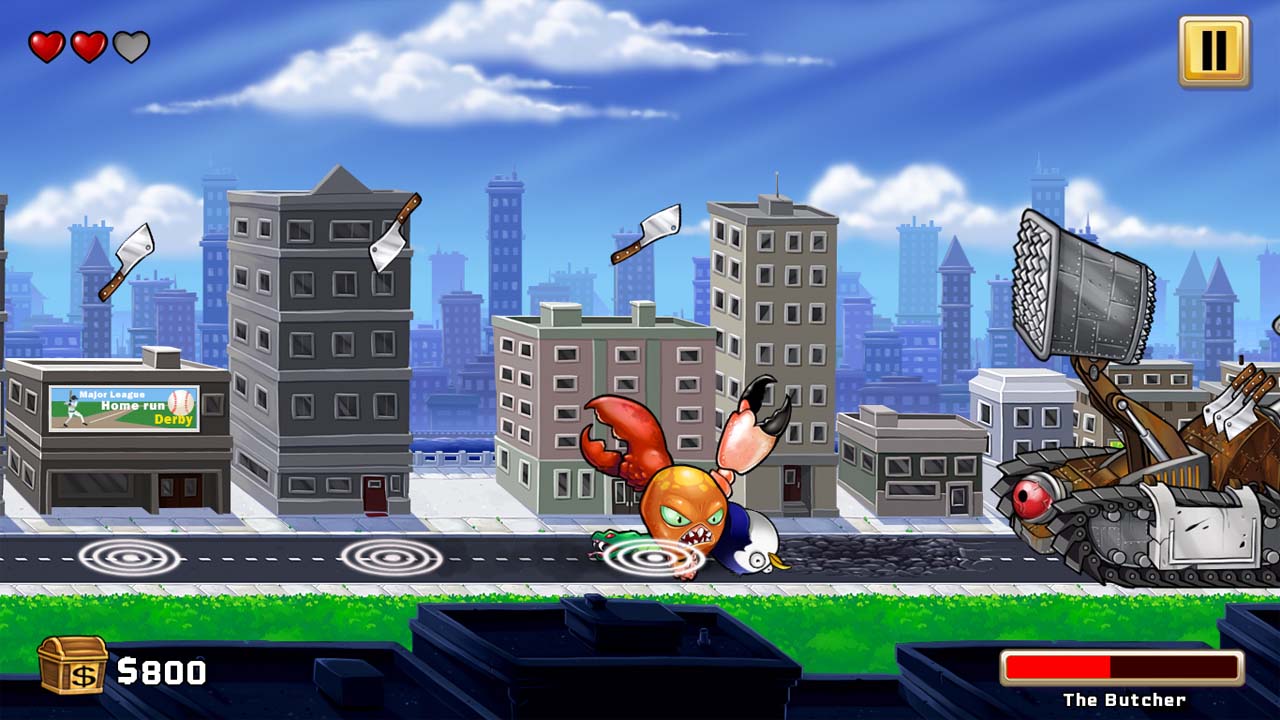 If you had told me a couple of months ago that I’d be hopelessly addicted to a game that requires almost no button input, a ton of joystick manipulation, and a lot of DNA experimentation, I’d probably be intrigued and want to know more about how you came to this conclusion. Then you’d explain it had to do with octopuses, and I’d lean in a bit closer, because I haven’t really thought about octopi since I left Japan. THEN you’d reveal you were a time traveller, and I’d be so disappointed in how you used your awesome machine, but secretly flattered because clearly this meant a lot to you. I’ve never hear from All Yes Good prior to this endeavor, but I can safely say they should be a name to keep an eye out for. Especially when you realize that this addictive gameplay is probably a result of the company’s founder, George Fan, was the designer of Plants Vs. Zombies, which suddenly makes a lot more sense. Welcome to Octogeddon.

Octogeddon is such a bizarre game with an even better plotline. There’s this certain octopus who could, theoretically, just live out his life quietly and peacefully. For whatever reason, he keeps checking a knockoff of YouTube for viral videos, and happens upon the WORST ones. Videos of sushi preparation, including octopus sashimi. Videos of Godzilla thoroughly beating a giant octopus. Even videos of Australian comedians putting on octopus suits and acting foolish to perpetuate the stereotype that octopuses are stupid (where did this stereotype come from, exactly?). In any case, these videos cause our main mollusc to fly into a destructive rage, at which point he sets off to demolish the biggest landmark in the country that’s offended him. Unlike those fake tv octopi, however, this creature is angry, determined, violent and…missing a few tentacles. It’s nothing science can’t fix!

Octogeddon is a unique and puzzling arcade game wherein the tentacles of your octopus are your only real weapon. You use a single joystick to spin left or right, angling your tentacles to attack ships, fish, jets, tanks and otherwise that get too close. Spinning in the water just means orienting yourself in the oncoming direction of attack, whereas spinning on land means keeping your tentacles as free as possible: after all, if you’re laying on top of your arm, you can’t really use it to hit something, now can you? From robotic piranhas to nuclear air balloons, the enemies are plentiful and come at you in different waves, often times compounding if you aren’t quick to nail your objective for each stage. The objective is sometimes destroying a single special ship, a particular building, defeating a boss/mini-boss or, finally, taking down the Statue of Liberty or Tokyo Imperial Palace, to name a few. 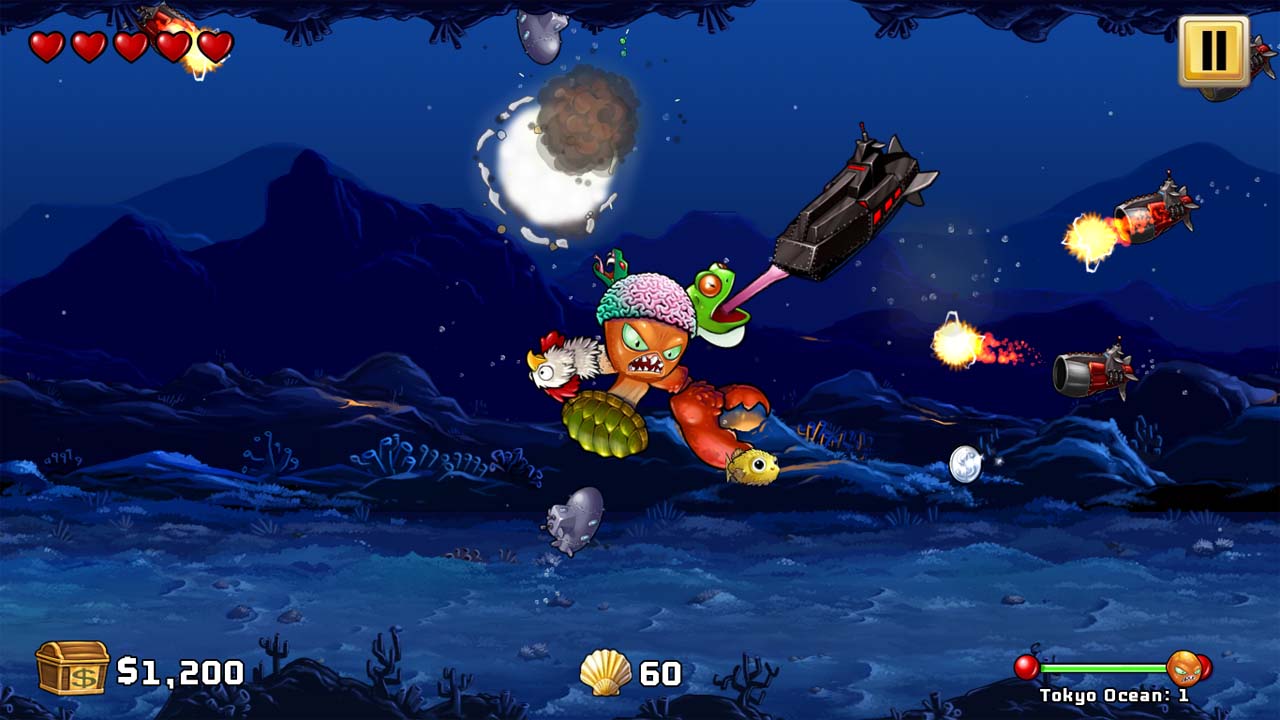 You aren’t just a simple octopus, though: where would the fun in that be? As you progress, you collect two currencies, coins and shells. Coins are used to buy upgrades between the stages, which are unlocked through progression and, well, spending shells at the game over screen. Coins will help you add more tentacles to your body (with the price increasing every time) and adding different, strategic DNA mutations to your tentacles, creating new weapons. It could be a claw to do strong melee damage, a shell to block incoming shots (they start shooting at you around world three), or any number of projectile weapons. Oh, you can also unlock a frog head tentacle that’ll grab enemies and throw them at other enemies, and that’s just FUN. The shells unlock goodies that can help you jump-start the game, like  portals to skip the ocean and go straight to the shore, additional tentacles and lives to start with, and some specialty DNA that you can’t get elsewhere (long live the porcupine tentacle!). Plus, spending shells gives you additional health bars as a permanent upgrade when you buy so many shell upgrades. So, spend spend spend!

Octogeddon is a marvelous mixture of strategy, reflexes, and dumb luck. Adding more tentacles means more options for what to have for your offense and defense, but having eight arms doesn’t mean getting eight successful kills. Often times, you find that you need to balance where you put everything, and how well that’ll assist you out on the field. When enemies are coming in slowly and directly, exploding eggs from a chicken’s head are helpful. When those damn golden jets come in fast and angry, homing bees might be enough to deal as long as the bees deem the jet ramming up your ass a “priority” as opposed to the nuclear truck on the other side of the building. The waves are far from static, so you need to trust that things will go your way with each decision. You can chop off your crab claw and replace it with a narwhal, but do you think you’ll have enough time for the strike to happen, or would something faster (PORCUPINE) get the job done? Also, do NOT sleep on the penguin head: the rapid fire freeze ray does no damage, but it’s a godsend when you’re getting overpowered and you’re waiting for the puffer fish helper to recharge so you can clear out the proximity offenders. Oh, right the little helpers: finish a full world and you get to do a mini game to collect a bunch of extra shells, and unlock an expensive helper that is the only reason you get to use a button. Puffer fish, fighting starfish, electric eel….these one-hit-wonders can buy you time at the expense of needing to really plan for when it’s worthwhile. If you’re the dude who ends up fighting Kefka with more than 30 elixirs on hand, then don’t even bother buying them: five hundred coins can get a lot of tentacles. 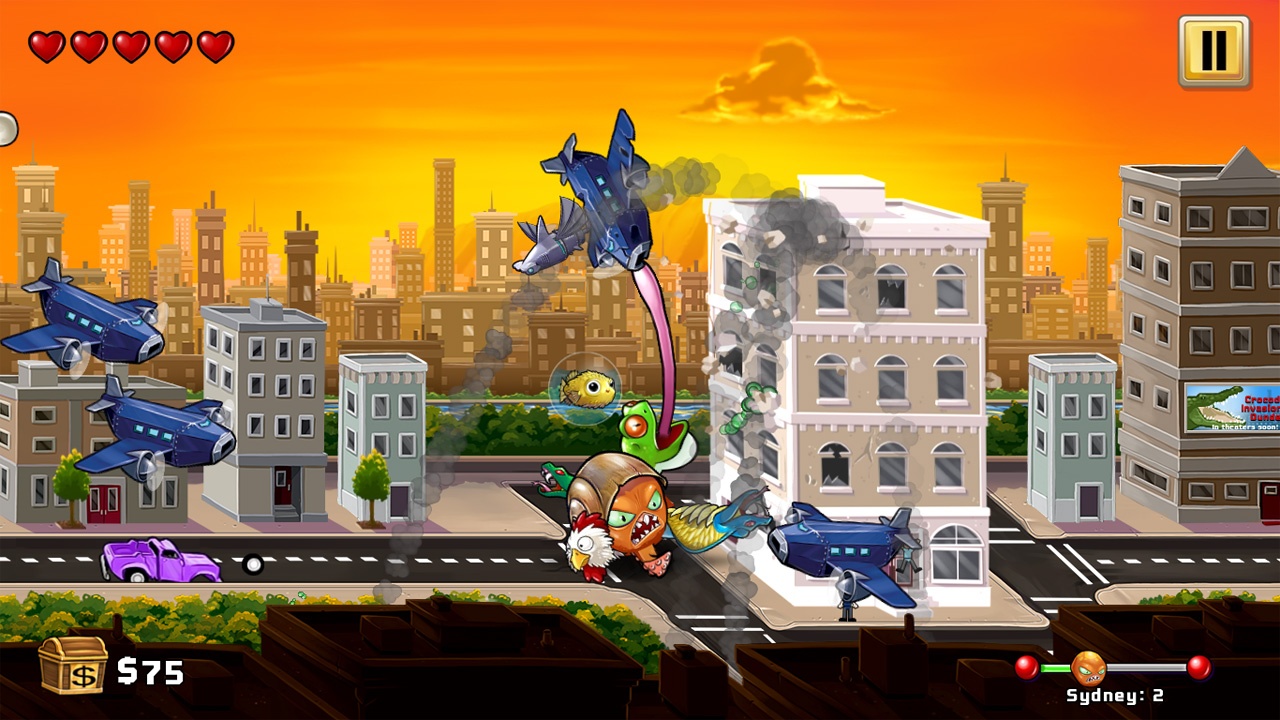 Also, my god, the SOUNDTRACK. Octogeddon has this wonderful sense of humor throughout, especially seeing the same sense of rage for each indignation (the dolphin deserved the award, probably), but then it’s further channelled by the soundtrack. Each stage feels like it’s pumping the player up with a different kind of metal, from symphonic to melodic to speed, and the anger and righteous vengeance is only heightened by the guitar and drum solos. Honestly, it’s the best metal soundtrack since I played Slain forever ago, and it’s so wildly appropriate and out-of-place in this game that it has to be heard to be believed. The only thing that would have made it better is if vocals were pumped over the closing credits to create the perfect anthem. Oh, wait, that’s totally what happened and it’s amazing. I don’t mean to sound so childish, but it was something I was thinking of as I finally destroyed the White House, and then it happened, and I was *so* happy.

This is one of those rare games where the complaints are incredibly minor compared to the meat of it all. Sure, Octogeddon is sometimes frustrating to build everything up, but that’s true for any tower defense or similar game where you have to start from the beginning. I prefer it this way, and players will get IMMENSE satisfaction from putting in the time and effort to rock the face off the world in octopus style. This game is simply perfect for the Switch: hyper simple to control, perfect pick-up-and-play or sit-and-play-all-day, and a great price point with solid execution. The character design, the concept, the soundtrack, the satisfaction of having a powerful setup and the agony of rapidly rolling back and forth, trying to attack and defend at the same time. Octogeddon proves that what is best in life really is to crush your enemies, see them driven before you and hear the lamentations of, well, everyone.

Octogeddon has made me love arcade style fun again, and, in a world overrun with deeply contextual gaming, it’s great to just see an angry octopus.