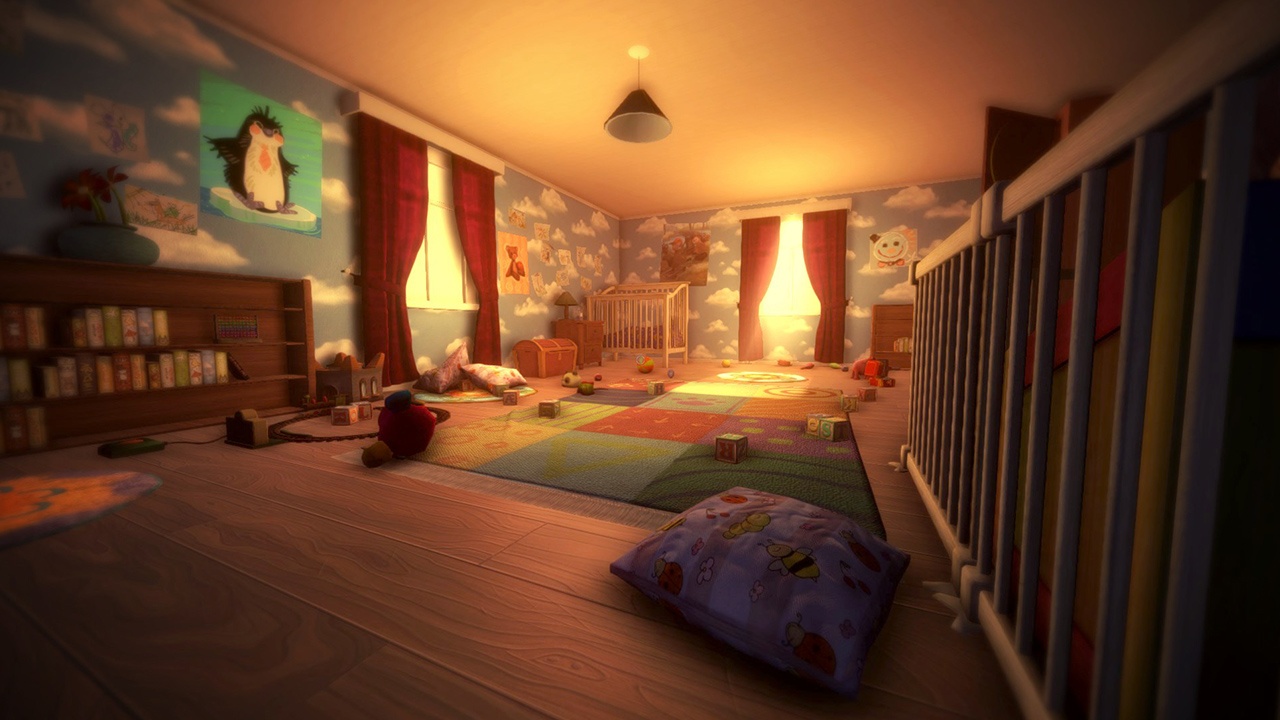 I’d bet my last dollar that the majority of us, if not all of us, have some kind of memory that revolves around a nightmare we once had as children. For me, it was my mum’s umbrella that changed into a monster and tried to eat me and for my son, it was a candle that walked up the stairs and tried to burn him. Whatever the content, these types of dreams can often be surreal. So, imagine if you could enter these nightmares and explore them for yourself? Well, now you can with Krillbite Studio’s Among the Sleep: Enhanced Edition as it makes a dream release upon the Nintendo Switch.

Published through Soedesco, this walking/horror simulator sees you placed within the slippers of a two-year old toddler, as you and your new friend, a walking and talking teddy bear, embark on a journey through your darkest nightmares in order to find your missing mother. Without giving too much away, the game starts you off with an introduction to normal family life as you are spoon-fed from your high-chair to playing hide-and-seek with your new found, furry friend. However, as you sleep in your cot one night, some strange, paranormal activity takes place, tipping you from your cot and straight into warped world of nightmarish levels across a series of differing locales.

Among the Sleep does a good job of keeping you on your toes with its psychological eeriness that forces you to ask questions as you travel through your dreams. Is this real? Is there a darker force present or is everything merely your imagination as a child? It’s in this premise that the developers have done a sterling job. Seeing and traversing the world through the eyes of a two-year old presents an interesting viewpoint in what is perceived and how you overcome the obstacles of everyday life. Simple tasks, such as opening a door, require you to find ways of being able to reach up to the door handle. It’s in this style of play that the game presents you with a series of puzzles to solve, although admittedly, there’s nothing here that is particularly taxing. 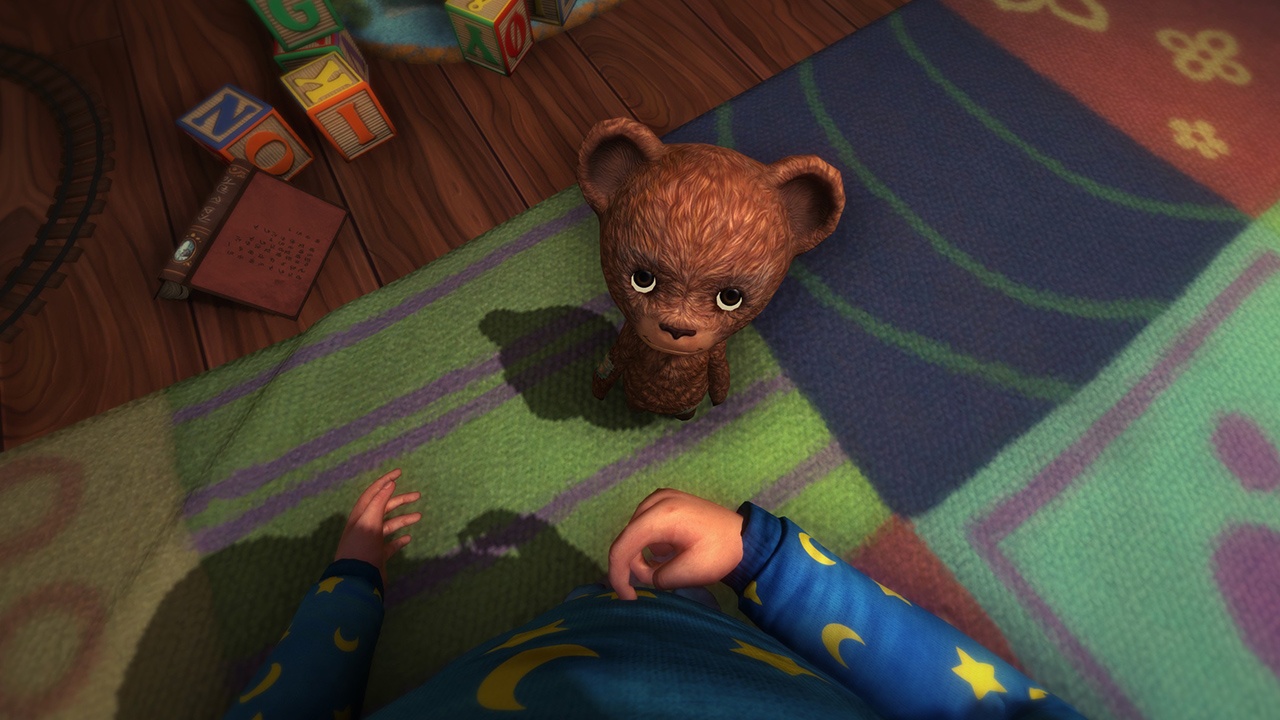 Again, I’m not going to give anything away with how to solve certain situations, or even detail what you may come across, but as a young toddler, you can walk, crawl and climb your way around the environments, some of which are based within the confines of a household and others take you to more surreal places. As you search for your mother, you unlock a series of memories which contain key components that are needed to advance. With the help of your faithful teddy, you both set about collecting items and objects in order to unlock the dream sequences of the memories of your mother.

Should you find yourself in a particularly foreboding area or dark passageway, then you can hug your teddy for reassurance. This in turn, creates a torch-like ambience that allows you to see where you are going and highlight certain objects that might be needed to traverse the scenery and advance through the story. Seeing the world through the eyes of a toddler adds an interesting perspective to the game and makes the exploration of levels all the more fun. However, despite each level containing a number of pathways, the linearity of their presentation creates a game that doesn’t really offer much of a challenge in finding its secrets or solving their puzzles.

Despite producing a twisted world, it rarely comes across as particularly frightening; even through the eyes of the two-year old you are playing. There’s never an emotive feel to the central character in showing any fear or trepidation of what he or she is experiencing. It’s simply a journey from A to B with not too much in-between, apart from the interesting perspective from where the game is viewed. Despite its ease though, the journey through the dream is an interesting one, at least on your primary play through, but once you’ve seen everything that the game has to offer, there really isn’t a lot to entice you back into its nightmarish worlds. 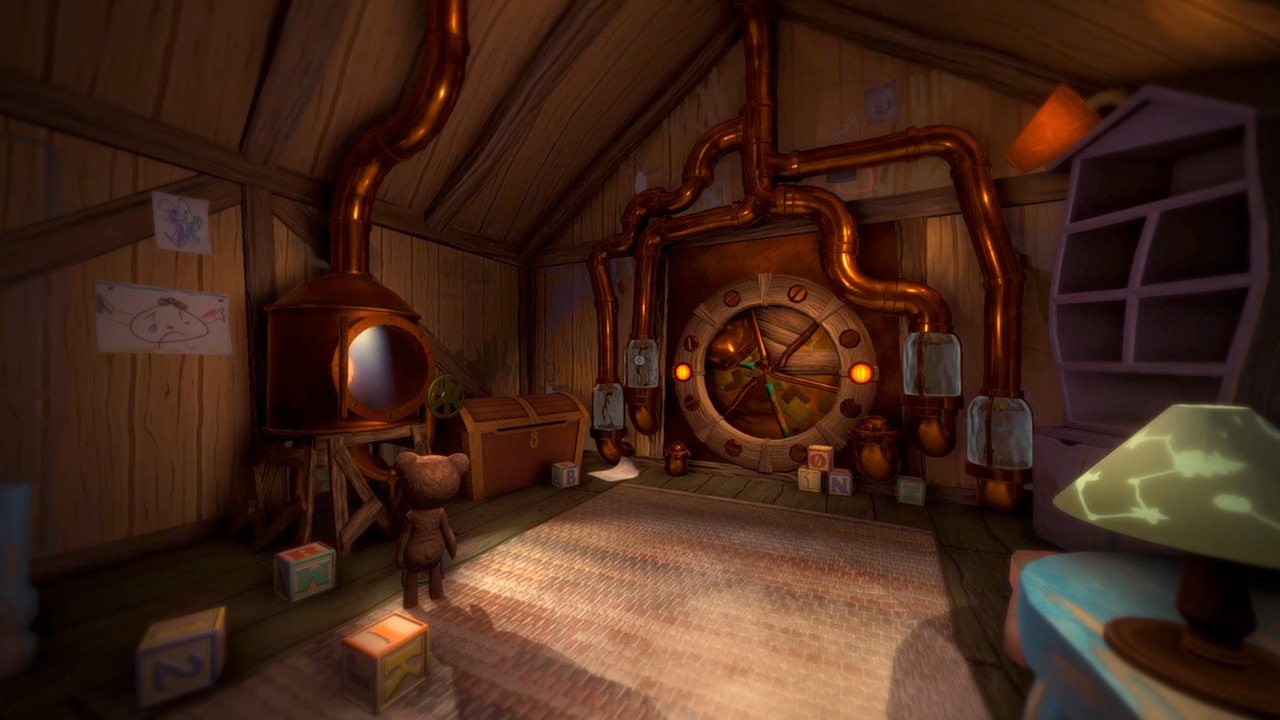 Being an enhanced edition of the game, there are a couple of extra features that have been added. As well as the obligatory overhaul of its graphical presentations, which in some levels have been sublimely done with nicely lit hues and dream-like qualities throughout, the game also presents a new prologue level and a museum that houses many of the game’s components and a textual narrative that provides some background information to what lies within the nightmares of the characters in which you play. Throughout the main story, a series of doodled drawings can be collected which adds to the museum; collect them all and you’ll be granted a special reward.

These extra features are a nice inclusion, especially with the museum which has been expertly done and presented. You simply walk around a large expanse from room-to-room, each one themed within a particular area of the dream-state or the characters within them. It’s a really nice feature that does present some long-term value with the collection of the drawings should you wish to uncover the reward that lies within a locked chest in the centre of the museum room that houses the collection. However, one word of warning, during one of my playthroughs, I was at the end of one of the levels and decided to take a break and look around the museum. Much to my horror though, the game created a save state that overwrote my progress, placing me back into the museum when I resumed my playthrough. The only way I was able to regain my original footing, was to play through the entire level again and make sure that I stayed away from straying within the museum again until I reached the game’s end.

Overall, Among the Sleep: Enhanced Edition presents quite a unique experience within the genre of horror or walking simulators. In terms of presenting the world through the eyes of a toddler, the game simply excels and presents a very interesting perspective; thus making it mildly enjoyable to play. However, a linearity of level design, frights that rarely frighten and a series of puzzles that don’t pose much of a challenge, ultimately produces a journey that you simply walk through from the start to the finish. There’s no real sense of fear, urgency or even accomplishment. It’s an interesting journey, but its just not a particularly challenging one. This can lead to a limitation of its long-term appeal, as once you’ve played through it once, there isn’t really anything else to entice you back. Its extra features are nicely done and the collecting of drawings do provide some long-term value, but again, once you’ve seen everything, there isn’t much after that; especially when you factor in a five hour or so total play time. There’s some interesting and clever stuff here, but look deeper into the dream-state and you soon discover a game that, although far from being a nightmare, presents an experience that you’ll soon wake up from.

Among the Sleep - Enhanced Edition Review

Among the Sleep: Enhanced Edition presents quite a unique experience within the genre of horror or walking simulators.