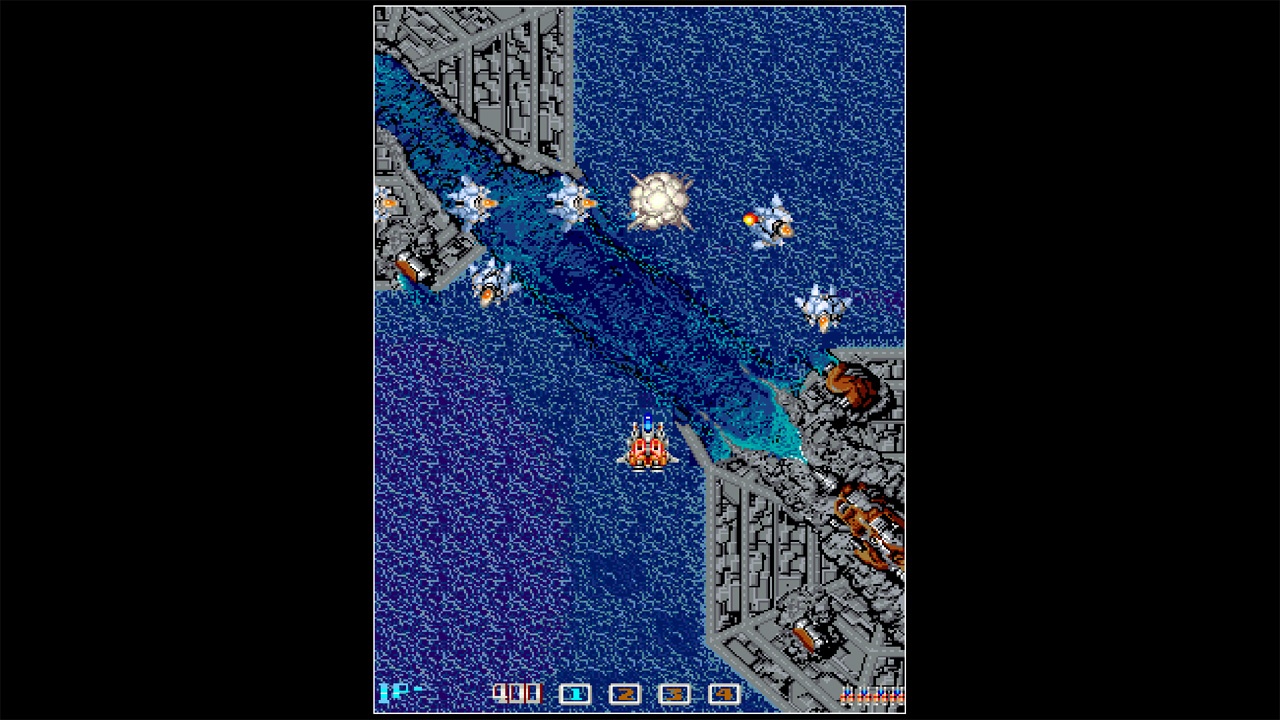 Video games from the yesteryear don’t always NEED to feel like relics that desperately need to be polished. As we’ve seen with the recent Konami collections (and I am so damn excited for the Contra one, can I just say), there are big differences between games that inspired through concept and those that inspired through execution. Especially when it comes to the shmup genre, players and aficionados give salute to the R-Types and the Gradius’ that paved the way, not just because they gave great inspiration, but because they’re still awesome games. Anyone who knows shmups knows Radiant Silvergun, and the lead producer, Hiroshi Iuchi, cites this particular title as a key inspiration to the design of Radiant Silvergun. That game is Image Fight, from the now broken iRem studio, and it still plays today like a brand new, shiny toy.

You want a plot? Alright, here’s a plot, stop me if you’ve heard this one. In Image Fight, the moon was destroyed by aliens, because they’re coming to invade Earth and we had a base on the moon. The aliens are from the Boondoggle Galaxy, and they want to take over, and we’ve developed an experimental spaceship, so you’ll fly to what’s left of the moon and shoot stuff. When you get a shmup with a ton of storyline (such as Astebreed), it’s a pleasant surprise, but it’s also entirely unnecessary. I get there needs to be justification for your ship to blow up a ton of other ships, especially when you’re going to introduce a bunch of sci-fi elements so you can’t just say “World War II!” and be done with it. You’re a good guy, everything else is a bad guy, explode the hell out of it. There, done. 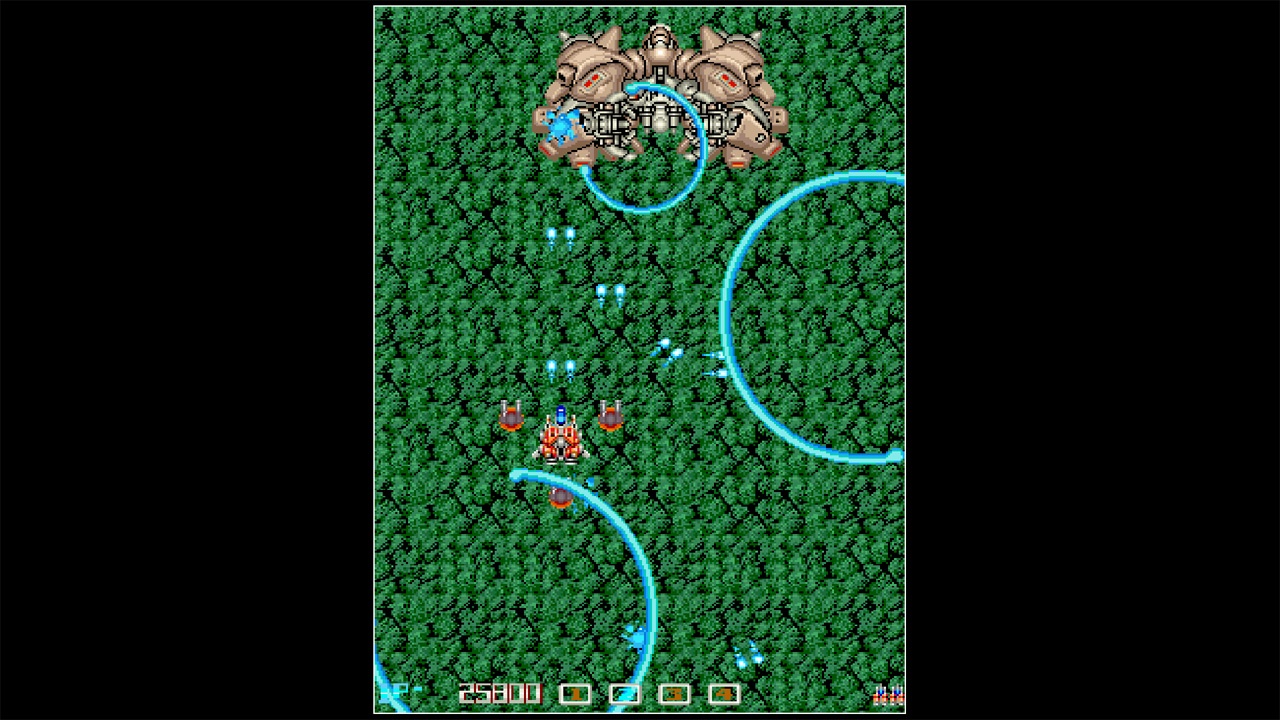 As a vertical shmup (with rotating orientation, another Switch victory!), the concept is as you’d expect. For Image Fight, you gotta get through three acts, and each one has a totally different feel to it. The first has five cohesive, separated levels, covering different terrains and capping with a decent boss at the end of each (plus a rating for how well you did in terms of destruction). The second is a two part space battle with each of the “areas” having some truly difficult and tenacious spaces to fly through, including one of the most frustrating sections in any game ever where the background is flying asteroids (which are moon chunks) but then there are ACTUAL asteroids that will take you out. The third and final act takes place in what’s left of the moon base, and, wouldn’t you know it, there’s an evil vegetation that’s messing up the computer and allowing aliens to get closer, let’s explode the hell out of it. The whole thing can seriously be done in like 20 minutes or so, probably a bit more if you die a lot, but it’s the journey, not the destination, and Image Fight is a unique and memorable ride.

Firstly, players will need to understand how to play to make the most out of Image Fight. Yes, there are enemies, yes, they will shoot at you, and yes, you need to know EXACTLY where your hitbox is. While we’re not quite at bullet hell levels, Image Fight asks players to navigate some pretty tricky areas to get from point A to point B, and you can’t always destroy everything on-screen as fast as you’d like. There are powerups, and you want all of them, but you gotta be patient. Your ship can equip up to three different “pods”, with red pods being dynamic and turning as you move, or the blue ones being static and always firing straight ahead. This is already a bit of a head turner, as it inherently lets you develop different play styles of being aggressive and dead on or more agile and staying away from the enemy. While I normally prefer the blue ones for maximum straightforward power, the red ones become almost necessary for a handful of sticky situations (looking at you, boss fight in Area 1). Also, powerups will allow you to equip different weapons for your main firepower, from the excellent triple shot to the confusing but useful ring laser, and you want them all. If you can power up, you take it, and you’re grateful.

Image Fight has so much to offer, and I’m really excited to see it all play out in the arcade version. You have these pod attacks where you can run the ultimate risk and hurl your two side pods at enemies for a big attack, but leave your ship a tad defenceless (the rear pod sticks around to help). There were a couple of times that this gamble paid off and I was able to clear out an immediate threat, but this never helped me in boss battles and only ensured my death was absolute. You can adjust the speed of your ship on the fly, allowing for quicker manoeuvers for evasion or slower for weaving between bullet curtains. The core belief structure of a shump – live by millimetres – rings true here, from the very first invasion to the very last explosion, and it’s so incredibly well done for the era when this was created. There are homing missiles that chase you about the screen for a decent amount of time. There are laser rings that make you perform Super Hexagon-style escapes to live. There are bosses that split into two different ships and pincer you from opposite sides of the screen, and you’re just supposed to live with that and make it work. 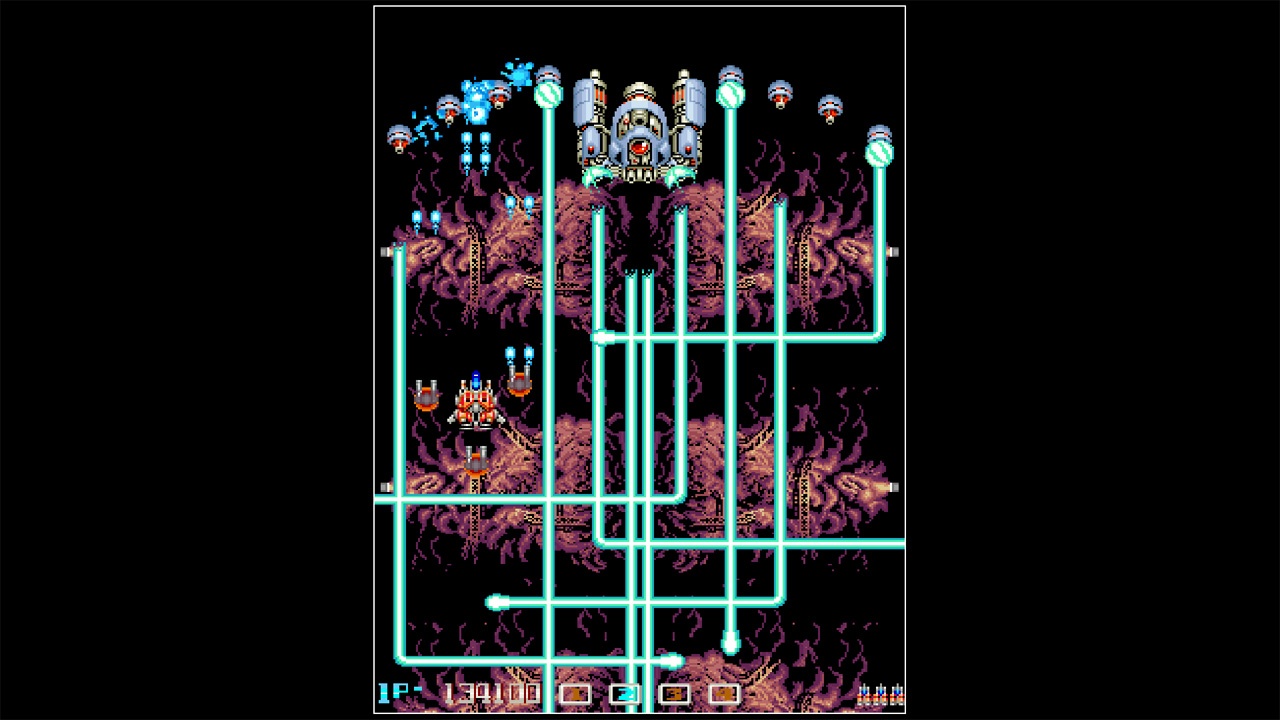 And, as it’s the arcade version, you get the positive best vision of Image Fight. Years ago, I played the NES port, and it was a travesty in comparison. Sure, the core gameplay was there, but the graphics were so poor and stunted next to the arcade version that it felt like a re-creation of Image Fight done in MS Paint. The arcade version has such grandiose ideas that are conveyed through space fields, mutated landscapes, desolate ship interiors and literal mazes made of broken pipes floating through the darkness. The game is anything but quiet, either: the soundtrack is positively amazing. Gone are the tinny bleeps and bloops that indicate whether you’ve shot something or not: Image Fight has a sweeping, almost orchestral electronic soundtrack, pulsing and pushing the player to be excited, to be ready, to be alive to fight off the aliens and keep their wits about them.  When I got to the final area and heard the thumping beat that was painted over with synthesized majesty, I legitimately got pumped and was ready for what the game was about to throw at me, which, as it turns out, was the kitchen sink.

This isn’t just a title to have and say “ah, right, I’ve played the classics.” Image Fight, the Arcade Archive of Image Fight, is a fantastic shooter that would be a contender for a great indie game if it was made TODAY. It looks magnificent for something over 30 years old, has a great soundtrack, and handles more tightly than any game I’ve played in recent memory. If you love shmups, you owe it to yourself to grab this classic and play the hell out of it. This isn’t Hawthorne, and we just acknowledge it used to be great: this is Fitzgerald, and we know it’s great right now.

Hamster drags a true keystone to gaming history into the spotlight with Image Fight, the space shooter that launched a thousand bullets.