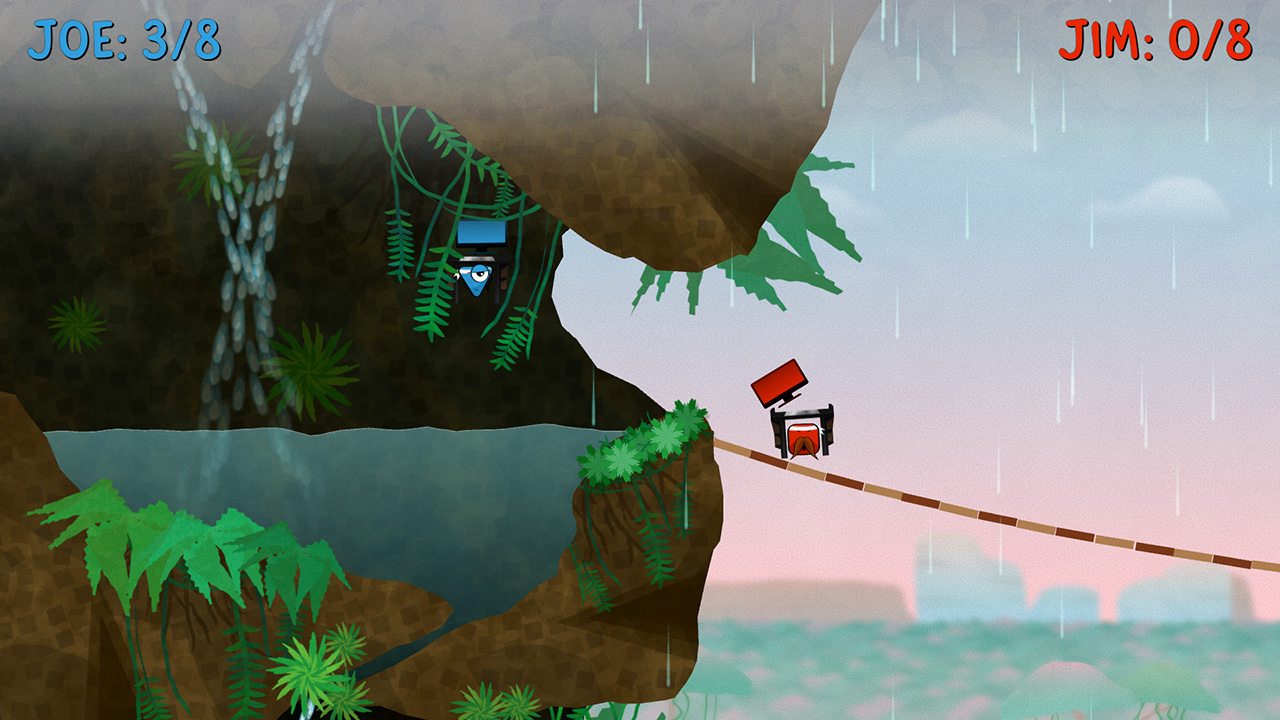 There comes a point in everyone’s life where they simply need to get away from it all. The hubbub of everyday life, the constant influx of information and dire warnings, those “third and final notice” bills I keep getting from some jerk, it all just becomes too much. So you decide that you need to get out and prove that you can unplug and just have a grand life without the pressure of city life. But wait! Perhaps you want to bring a few things with you. Adam Sandler only needed his phone, wallet and keys, yet that might not be that jam for you. Music is essential, so having your trusty record player is essential and you don’t just want to sit on the ground where bugs are, you’ll have to bring a chair. Oh, and you might get hungry, so why not bring along some snacks, or, better yet, the whole damn fridge? As a matter of fact, if you could, why not just drag your whole apartment with you? That’s certainly the idea that Jim was granted by the God of Moving, and the crux to the idea of the physics based game Jim is Moving Out.

Jim is Moving Out, as the title suggests, is about a red square with a mustache named Jim, who wants to get away from it all, even his friendly and apparently adoring neighbor Joe (who is a blue triangle, and completes the development team, Red Square Blue Triangle). The God of Moving, being a tricky deity, sets Jim on a task to drag his entire apartment far, far away from the city he loathes, to someplace where he can listen to his gramophone and drink coffee in peace. Naturally, Jim isn’t going to get a moving truck or anything like that, no sir. Instead, Jim will use the power of his limbless body to physically propel his whole room across the board, dragging it over gaps, down tunnels, through narrow enclosures and along rooftops in order to reach serenity at last. If he decides that he wants to do co-op, he may get a bit of help from Joe, who sincerely just wants to see Jim happy, though I personally went at this in a single player capacity. 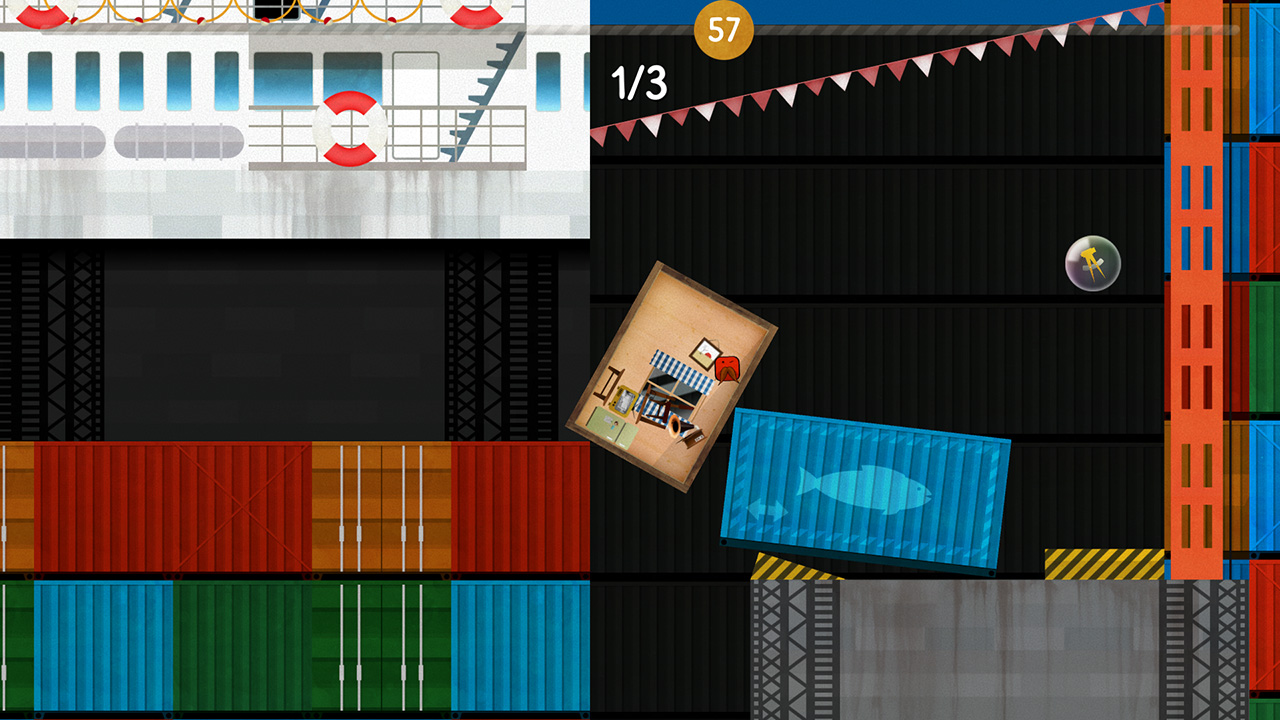 As Jim drags along his apartment, there are a few things to consider that will change the way you approach the game. First and foremost, the apartment is destructible, and that’s a problem. The apartment won’t just shed pieces of itself along the way, and, thankfully, you don’t need to worry (at least in the main game forms) about having a certain percentage in order to succeed. However, if you’re unlucky enough to hit zero percent, the entire apartment falls to shambles and, surprise, it’s game over. This also happens if you’re a smart alec like myself and see what happens when you purposely go the wrong way and throw the apartment off a rooftop and into the void below. Additionally, as Jim is not a true minimalist, there is a set of furniture in Jim’s apartment that will move around and crash into each other/the walls depending on how things move, and the amount of collision damage will change depending on the velocity and severity of the crash. There was one time where I lightly bumped into a wall, but the furniture was stacked on top of itself and resulted in a chain reaction of the fridge landing on everything else and doing something ridiculous like 40% of the damage. You gotta be careful in the game.

In fact, care is the tune you carry throughout the entirely of the play of Jim is Moving Out. You will often find situations where you’ll need to rotate the room, which can be a devastating endeavor if you’re attempting to do it quickly in any way. The shift of weights inside can cause a lot of damage, but also change the way that Jim is able to move the room. Remember, he’s doing everything from inside the apartment, and essentially uses force of will to drag a whole box of a house along, sometimes through midair (with gradual descent), and you can’t simply just trust gravity to not completely bone you. I hope your JoyCons are in good shape for their joysticks, because the left one is the soloist of this whole game, and it becomes a bit of a chore to really, truly figure out what you need to do in order to reach the windsock that marks the end of each level. That’s not even counting what it turns into after an initial completion, where you unlock item collection mode (which involves pivoting the house to reach slightly inconvenient but not insane floating objects), and time attack mode, which really tests your ability to balance out durability and response speed.

What’s interesting about Jim is Moving Out is that you master the concept of the game within the first two levels, but it’s up to you if you decide to adhere to it. You see, there’s no time limit and no official ranking for the damage of the rooms on the standard instalment of each stage, so patience is really a virtue. Instead of becoming a stressful game, it becomes a slow paced, careful manipulation of the room, wiggling Jim back and forth in certain spots and locations to gradually slot your room down shafts or to ramp it up “stairs” without damaging things too much. When you go into a free fall, know when to tap the joystick up to slow your descent, and you’ll stick the landing without too much damage, if any. Naturally, once you get into the time attack mode, things take on a different tone, but that’s ultimately your call if you want to delve into that third and most frustrating mode. Then again, with a slightly premium indie price of around fifteen bucks, you’ll want to squeeze out every drop of gameplay that you can afford. 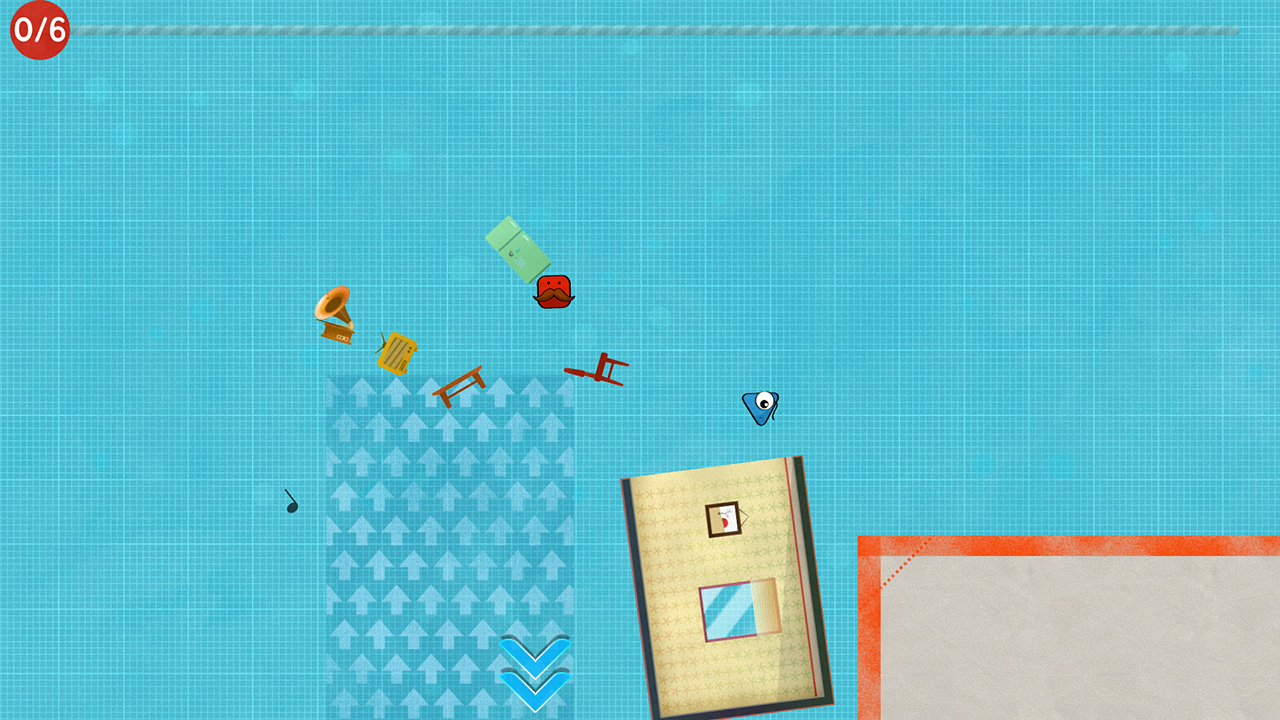 Besides the aforementioned Co-op mode, there’s also a couple of mini games that you can explore through unlocks via beating the main stages of Jim is Moving Out. You’ve got a deathmatch mode (yes, really) wherein Joe and Jim get to slam into each other and see who survives the longest. The idea is sort of fun, though significantly different since a lot of the time you’re balancing items on your head instead of being in the house, so the dynamic is different. You’ve got a “wheelie” mode, that puts wheels on Jim’s house, and changes things…a bit. The game sort of changes into a variant of Snuggle Truck, but without the same amount of lost items at stake, and it changes locations from the wild open fields to a laboratory of sorts, like you’re testing out the house with wheels. It’s truthfully quite boring, and there’s no achievements or successes here other than “you did it!” Then you can do the house with wheels AND co-op, so strangling your friends becomes an even more distinct possibility. You unlock each single level of these by collecting seven vinyl records, and you get one record for each of the main story level formats you beat (so three records per level), so you can really grind it out if completionism is your target and goal. For me, I just wanted to get through the main story and see how Joe adjusts to his new life without Jim. Surprise: he learns a valuable lesson.

Scored with a set of familiar classical music and done up with some simple but charming artwork, Jim is Moving Out is an interesting release from Red Square Blue Triangle, and has the potential for more improvement and evolution in the future. I would certainly like to see additional levels within the game, and perhaps a bit of actual, visual damage after a certain percentage, but it works in the format it owns. Players might find this launch price tag a tad high, but it’s far from unreasonable, and it holds plenty of strong content, especially if you get a second player involved and enjoy beating each other up in the different deathmatch arenas. If you’re looking for a puzzle platformer that can either set your heart racing or completely pacify you, then grab a box and help Jim move.

Jim is Moving Out! Review

Jim is Moving Out is an interesting and quirky physics puzzle platformer that provides plenty of replay for the interested, but not a ton of variety otherwise.