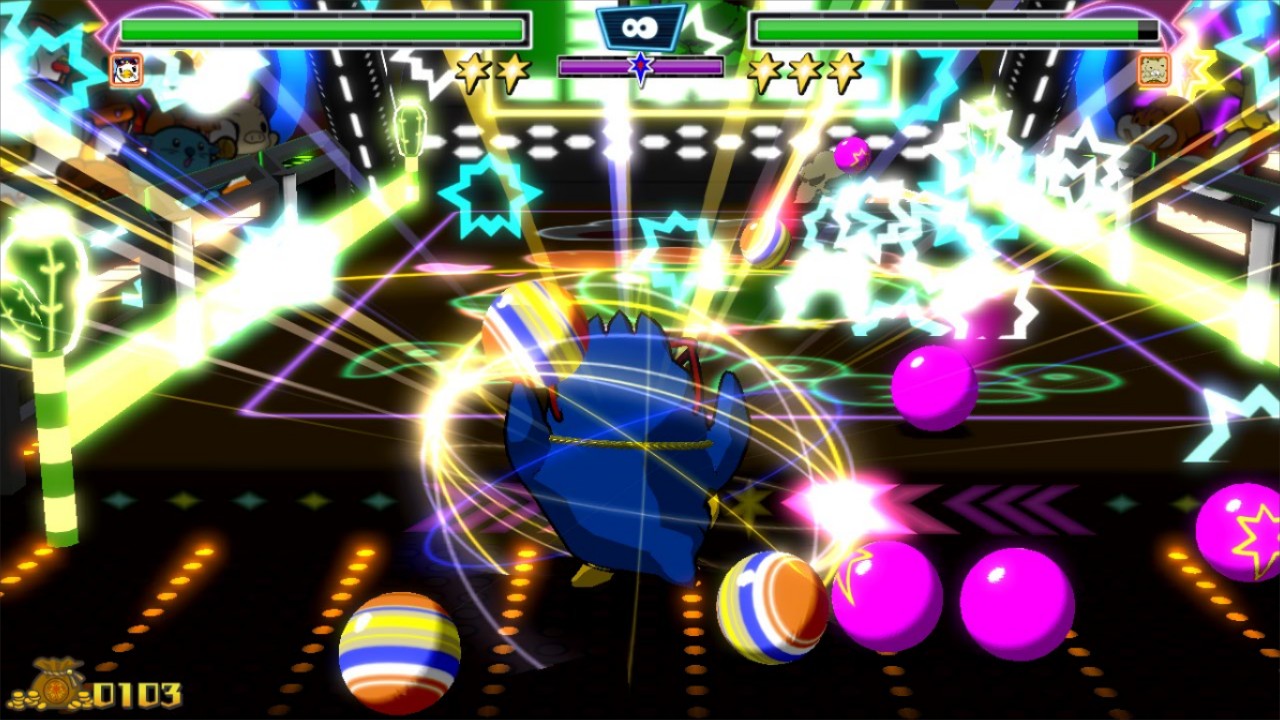 During the early years of arcade gaming, many of their styles were based on short, sharp experiences with limited lives and punishing gameplay in order to lure those dollars from your pocket and into the coffers of its inviting slots. After the initial wave of excitement from Space Invaders and Pac-Man, technologies began to change during the mid-eighties, bringing a more complex level of play with games such as Outrun and After Burner. However, there was a smart little game that many arcade goers missed with the attraction of motion cabinets and flashy graphics. That game was Penguin Wars, a mix of dodgeball, head-to-head fighting and an overwhelming attraction of just-one-more-go. A Nintendo Gameboy release, during the early part of the nineties, ensured that our little feathered friend didn’t get lost in the icy waters of isolation, but now, we get the whole experience and more as Penguin Wars now shivers a release onto the Nintendo Switch.

First and foremost, this is primarily an arcade game. And I mean that in the purest sense of the word. This game is more arcade than any arcade game before it. It contains many levels of pure, unadulterated mayhem from its dodge-the-ball mechanics to its Street Fighter style of satisfying combat and special abilities to its multiplayer madness. Its such a simple premise, yet one that is utterly addictive with its cutesy charm and one-more-go mentality. They say that it is the simple things in life that are the best and this is a saying that is particularly true when it comes to the mechanics and gameplay of this title. It’s basic, it’s, somewhat, simple, but damn, it is so hard to put down.

The core of its gameplay revolves around two, or more, players standing either end of a table and lobbing balls at each other in order to hit your opponent; think of Air Hockey without the goals and your half-way there. With a life bar ever-present, the more hits you accrue, the lower their health with each bout being decided with your opponents health at zero or significantly lower than yours when the round is up, or vice versa. However, what Penguin Wars does is throw much more into the ring to keep you invested in its fast and frantic level of play. Things start off simple enough, just throw your balls and dodge anything incoming. As you progress though, new mechanics get added such as obstacles that rebound your balls, curve balls, special moves and abilities to mix things up, and even bombs! 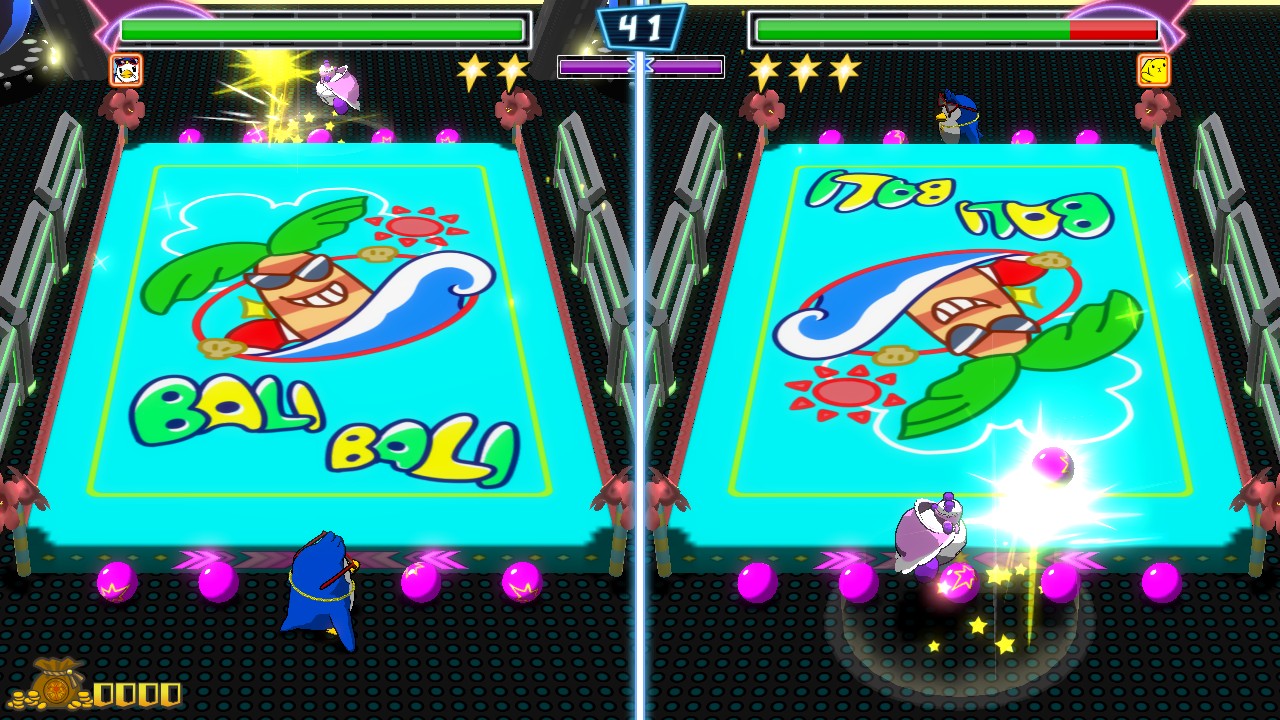 You could say that it adds a level of depth or a touch of variety, but I wouldn’t say that this would be a correct assumption. What it does is just simply adds to the mayhem and the abundance of elements that make up the whole level of fun and addictive gameplay that you’ll find here. Although in its basic terms, you simply play a form of dodgeball, you soon discover there’s a lot more hidden away here. For instance, get all of the balls into your opponents side of the field and they get pelted with every single one or failing to defuse a bomb in time means an early exit. It creates a short-sharp level of play, with each bout lasting minutes, or even less.

However, one of its appeals comes from a selection board of options between each bout. Pinned to the side of your travelling van, the story revolves around you trying to get to Gira Gira Land, you are presented with a series of flyers that offers combat scenarios, bonus levels and shop items. You can choose simple one-on-one matches or team-based scenarios where you must overcome a series of opponents to passive abilities and special moves (known as Gira Moves), balls and characters; as well as the obligatory boss battle. There’s so much to choose from or investigate that you find yourself hopelessly addicted to its short bouts, collection unlocks and generally fun advancement throughout the levels, locations and opponents that the game throws at you.

It’s all backed up with an equally engaging aesthetic too, with bright, colourful, neon-soaked graphics, cutesy characters and fun options. This is just pure arcade in the true sense of the word. However, despite a fun single-player campaign, it’s in its multiplayer capacity that this game really shines. Catering for local couch or online play, for up to four players, the hours of entertainment that this game can provide in this respect is immense. Playing within a variety of ways, from 1v1, 2v1 and the insane 2v2, the level of gameplay and pure arcade fun is one that is unsurpassed by very few other games. Throw in the abilities of Gira Moves, fast dodging dashes, power-up throws and obstacles, this is a laugh-out-loud experience that really shows the level of addictive qualities this game possesses. 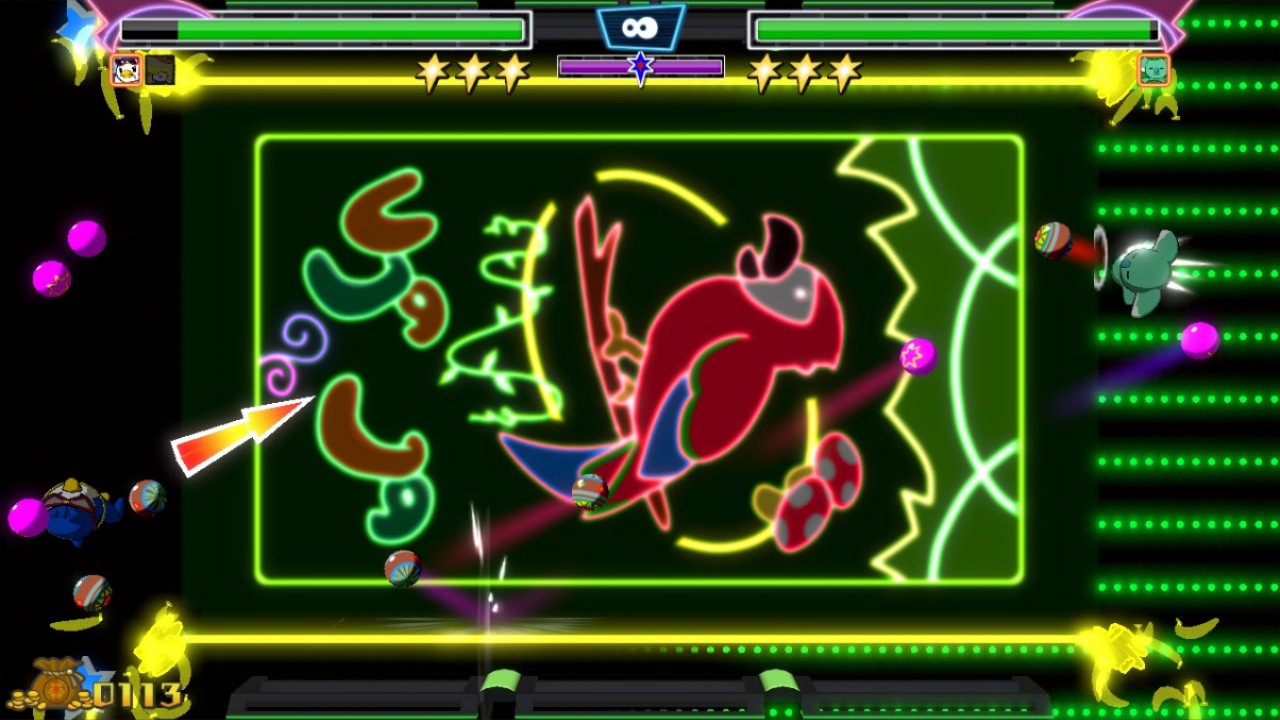 There are also a variety of camera angles in which the game can be played, from a third-dimensional split screen to an overhead view, you’re guaranteed to find a setting that suits how you play; you can even play with a vertical setting while the Switch is in handheld mode. Although it contains a campaign, multiplayer capacity and the ability to play bot matches, it also contains a wealth of unlockables that forces you to keep tasting its delights. Extra characters, balls, moves and abilities can all be worked towards, awarded and brought to keep the completionist in us happy.

There is also some DLC available for the game, The Hebereke Character Pack; although this does need to be bought separately from the eShop. This character pack brings four extra characters to the party; each of them only being available to play in a multiplayer capacity; both local or online. These characters bring their own styles to the game, with extra moves and abilities from what the base game contains. However, this download also comes with a choice of BGM’s in an original or remixed style, selectable stages on which to play, plus new balls, icons and cut scenes

Overall, Penguin Wars presents one of the finest iterations of arcade gaming in its purest and most fun forms. It’s hectic, yet easy to play and immense fun, but hard to master. There’s plenty of content hidden within its depths, from a fairly decent campaign to its long-term appeal of multiplayer and large series of collectibles. It’s bright, colourful and extremely playable with all of its charms. However, despite its level of playability and the fun factor within this game, it is a little pricey for what you get; the same can also be applied to its DLC. However, if you’re looking for a simple arcade game to provide quick fixes of pure arcade fun, you’ll definitely find it here and to be honest with you, in terms of arcade style games, there is a lot here to like and enough to warrant a purchase, despite its price. It’s fun, it’s fast and it’s down-right addictive and for that alone, makes this a very recommendable game.

Penguin Wars represents the best of arcade gaming with a fun multiplayer and addictive journey to Gira Gira Land.