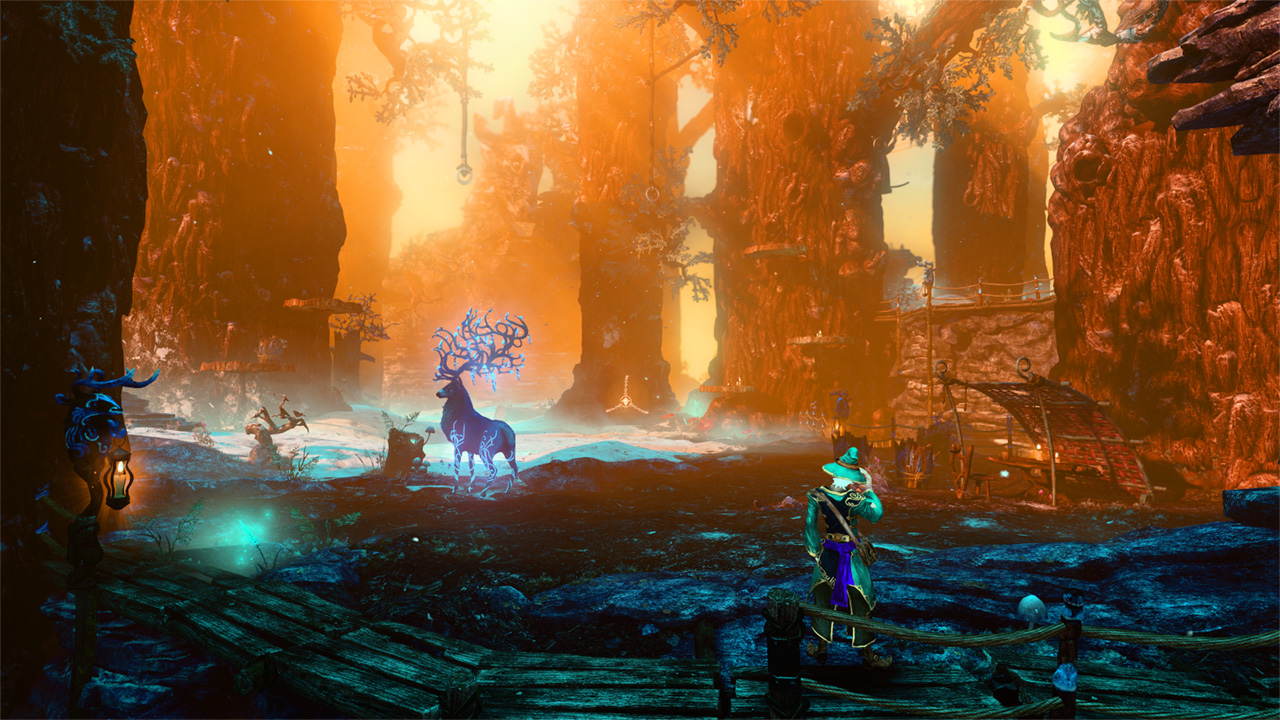 Over the last ten years, the Trine series of games have charmed with their sumptuous graphical presentations, 2D platforming and likeable cast of characters; something that has been revitalised in recent times with the releases of Trine 1 and Trine 2 on the Nintendo Switch. Admittedly, I have to confess to being one of the few that were never engaged by the games’ premise. I get where their popularity transpires from, as I did have moments of fun with them, but ultimately, in the end, found myself just getting frustrated with some of their mechanics and lack of ability to sunder off into the gorgeous backgrounds and explore more. However, with the release of Trine 3: The Artifacts of Power, all of my dreams may have just been answered with its fully-realised 3D worlds that allows me to blend into the backdrops of Trine’s lore.

In large, the premise revolving around the gameplay remains the same: using a cast of three characters to utilise their powers in solving a series of puzzles in order to progress through the story. This time around though, the level designs have been built to allow you to journey into the backgrounds and foregrounds of each level in a seamless transition from the 2D-style we all know and love, to a third-dimensional journey that brings the world to life with another dimension. The game follows Pontius the Knight, Zoya the Thief and Amadeus the Wizard as they attempt to return their extraordinary abilities to the Trine Artifact. However, with a lack of understanding and the meddling within powers beyond their recognition, the artifact shatters; releasing an ancient sorcerer who forces his heartless domain across the land.

With only the broken pieces of the artifact to guide them, out hapless heroes embark on a quest to right their wrongs and prevent any further repercussions of their actions from getting any out of hand. As with previous entries within the series, each of the characters can be switched between in order to use their abilities, either singularly or in tandem and a group, in order to solve a series of puzzles across various platforming levels. However, this time around there have been a lot more elements added to the overall game, but at the same time, has also had to make a series of sacrifices; some of which could be decisive in maintaining the series’ success. 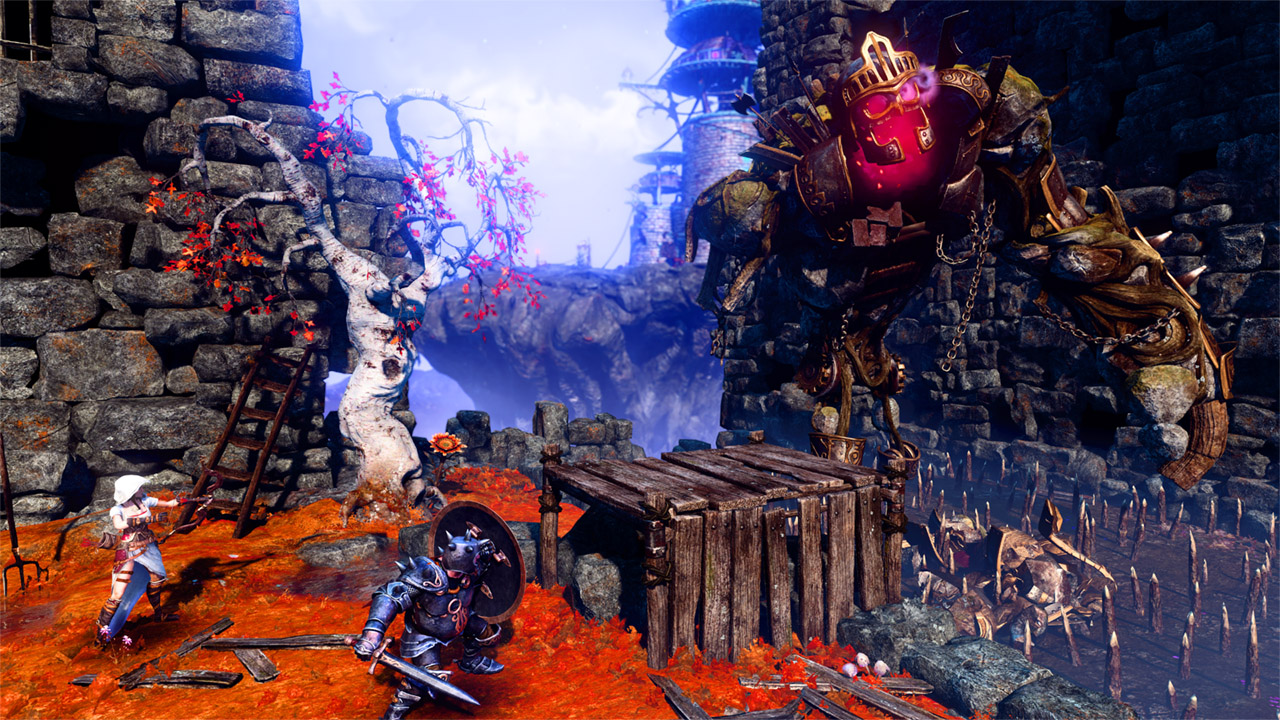 With the ability to transition between backgrounds and foregrounds, as well as traverse in a third-dimensional setting, each of the levels seem to take on more life. This is all further enhanced by the usual standard of sumptuous graphical presentations and further bolstered with impressive cut-scenes, fluid character animations and a variety of spell-binding environments. The game excels with its presentational values, as the camera sweeps around seamlessly to produce a setting reminiscent of an animated movie and a narrative that charms with the charismatic overtones of Terry Wilton. In terms of this level of production, the game simply cannot be faltered, as it lures into its engaging story of Trine’s history and lore and forces you forward to reveal the many surprises it has in store for you.

However, despite its charm, there have also been a lot of changes that could potentially split the fan-base of the games’ series. Many of its mechanics and elements have been stripped back for this game, with no skill-tree for the central characters, a reduction in their abilities and some environmental issues that could hamper your experience of the game. This largely depends on what side of the fence you sit on. For seasoned vets of the series, there may be one omission too much. For newer players though, this creates a perfect introduction into the worlds of Trine. Its scaled back elements and environmental changes have, undoubtedly, produced a more simplistic game in terms of solving its puzzles and its lack of ability moves and skill progression gives a more streamlined experience.

Its biggest issue though comes through its environmental change that can make it difficult to spot potential hazards or aim your weapons in a satisfying way. To be honest with you and depending on what sort of gamer you are, these are only minor annoyances really, as the overall level of playability within this game far exceeds any of its potential flaws, at least for players who may have struggled with the previous games or newcomers to the series. As I said before, if you’re a seasoned Trine player, then you may find yourself disappointed with this release. In some ways, this makes it an ideal entry point into the series and may encourage newer players to revisit the prequels. 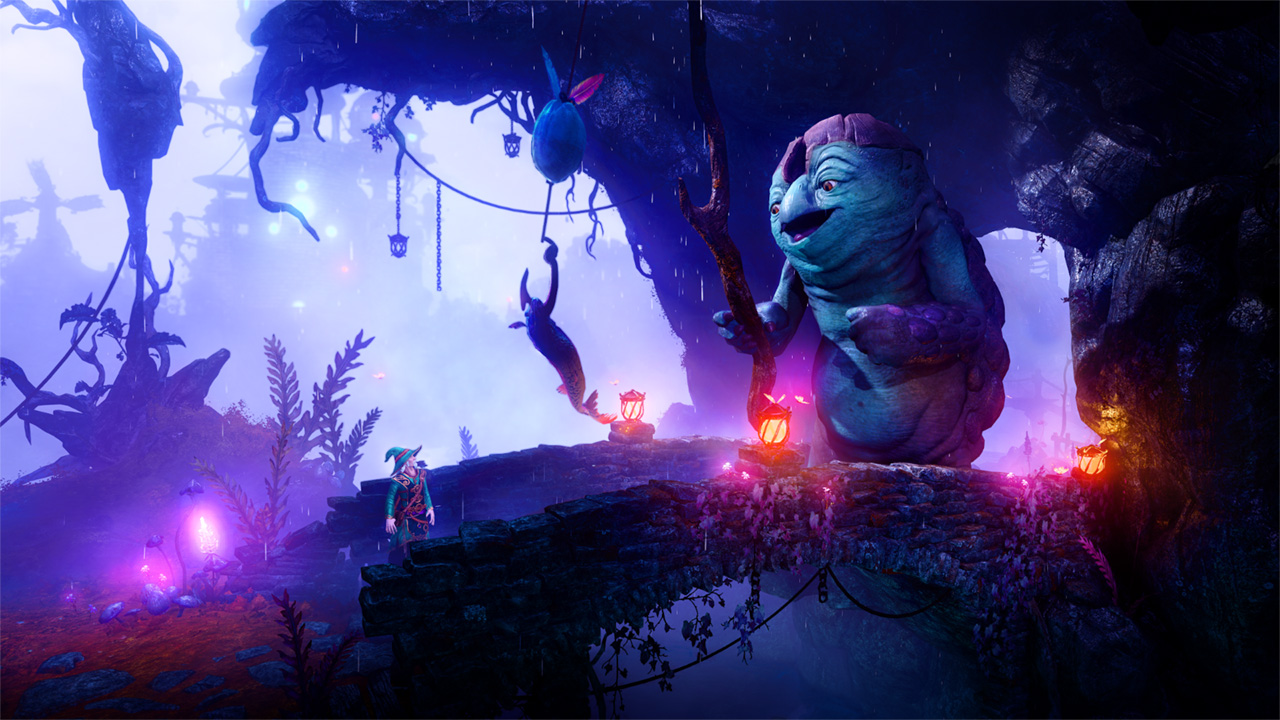 I’m making it sound like that this could potentially be a broken game, but it’s by no means anywhere near it. It just may not be to everyone’s taste, but that will be largely down to personal preference. For me, I think this is actually the strongest of the trilogy and its streamlining has created a more accessible and enjoyable journey. The story is incredibly engaging, helping to shape the world and create an image of the evil that has been unleashed into it. The dialogue is particularly well done too, with some hilarious cut-scenes and constant banter between each of the characters. However, its length has been dramatically reduced when compared to the other games, clocking in at around half the time it takes to complete Trine 2.

In order to try and preserve its longevity though, each of the levels contain a series of collectibles called Trineangles. This in turn, unlocks future levels. The game also comes bundled with ‘The Lost Pages’ quests to help flesh things out, but in reality, these are nowhere near as involving or as long as the main quest that is on offer. It’s real gem in the crown though, comes with its ability to play the game within multiplayer, both locally and online for up to three players. This brings a whole new dimension to the gameplay and adds an interesting perspective to the fun you can have with the game; especially when playing locally with friends and family.

Overall, Trine 3: The Artifacts of Power is, for me, a step in the right direction for the series. However, I also acknowledge that there’s going to be a lot of people that disagree with me. If you’re a new player to the series, or simply couldn’t get on with the previous two titles, then I would recommend giving this third game in the trilogy a try. If you’re a seasoned player, then I’d recommend a bit more research before jumping in. For the rest of us though, Trine 3 presents a gorgeous game, especially on the Switch, with an involving storyline and ease of gameplay that makes the whole journey an enjoyable experience. For some, it may be an adventure too far, but for others, this is a mystical game that is simply magic and one that leaves a sweet taste in your mouth. So, why not come Trine with me!

Trine 3: The Artifacts of Power

Trine 3: The Artifacts of Power will split the community, but in my opinion is the best of the series so far and an ideal entry point for new players.