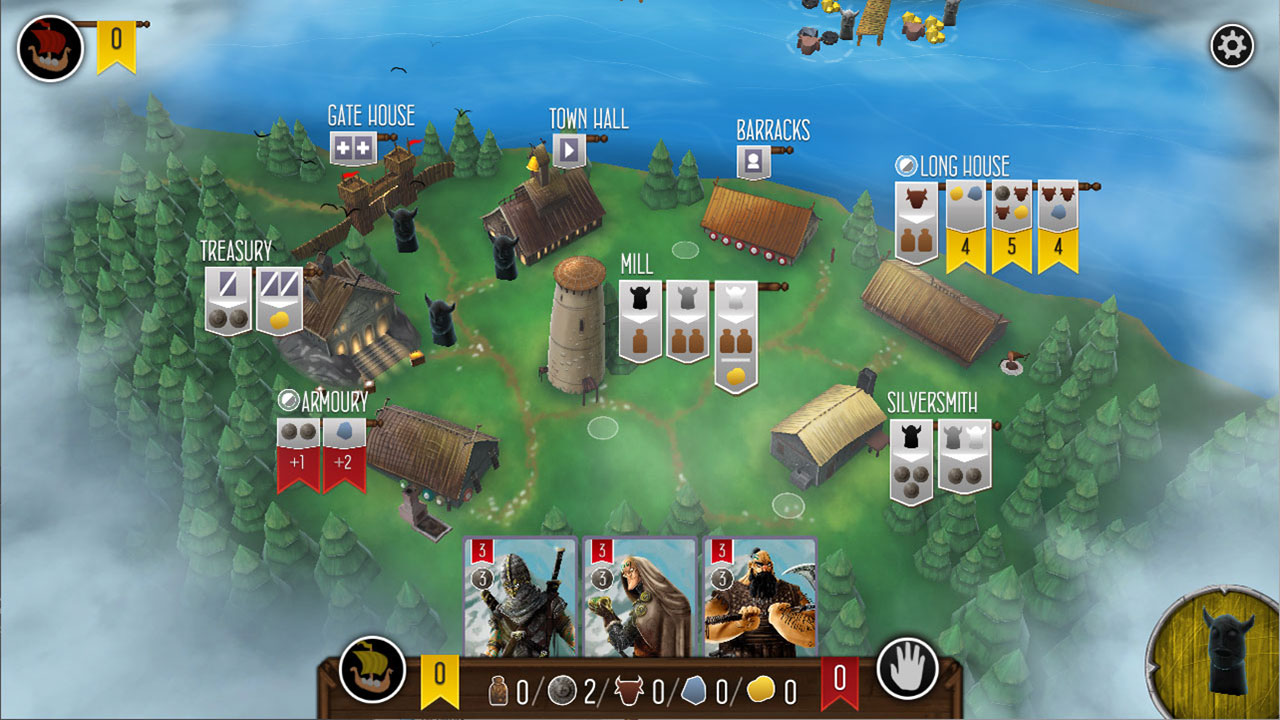 The conversion of board games from the physical to the digital can often be a difficult transition to get right. This can be especially true of the more mainstream board games, such as Monopoly or Cluedo, as they have a long-established history and a certain style of play that brings people together. Although many iterations of their digital styles have performed well, for me personally, I’ve always felt that they miss a certain something and ultimately, end up a bit lacklustre when compared to playing their physical editions around friends and family. However, there are a number of board games that can transition well to a digital format.

These games are often found in a less mainstream and more niche market and often revolve around tactical decision-making rather than the luck of a draw or the roll of a dice. This is most certainly the case when it comes to Raiders of the North Sea, with its digital adaptation of Eurogames’ award-winning board game as it plunders a release onto the Nintendo Switch. Developed and published by Dire Wolf Digital, this game revolves around preparation and plundering in a Viking adventure of worker-placements, gold and glory. Not being your typical board game, in the sense of not presenting you with a set path to traverse, the structure of this board game is one that translates to a successful formula for the digital markets, with an ever-lasting appeal and long-term playability, cross-platform and local multiplayer, plus a level of single-player engagements to keep soloists happy.

There are a variety of aspects to the gameplay, the first of which requires you to build up a raiding party and accrue enough supplies to keep them going on their plunder. From your home village, you need to place a figurine within a selection of buildings. Each of the dwellings offer various options, from drawing crew cards to accruing silver and harvesting resources to hiring crews. It works in a two-phase setting, firstly by placing a figurine and secondly, by retrieving another. This in turn gives you two abilities per turn. Across an expanse of water lies the settlements that need to be raided. These vary from harbours to outposts and monasteries to fortresses. Each of these settlements have a pre-requisite number of fulfilments that need to be met. These range from specific numbers needed for your raiding party, as well as the amount of supplies needed to holding a certain figurine and building your attack stats to exceed a targeted number. 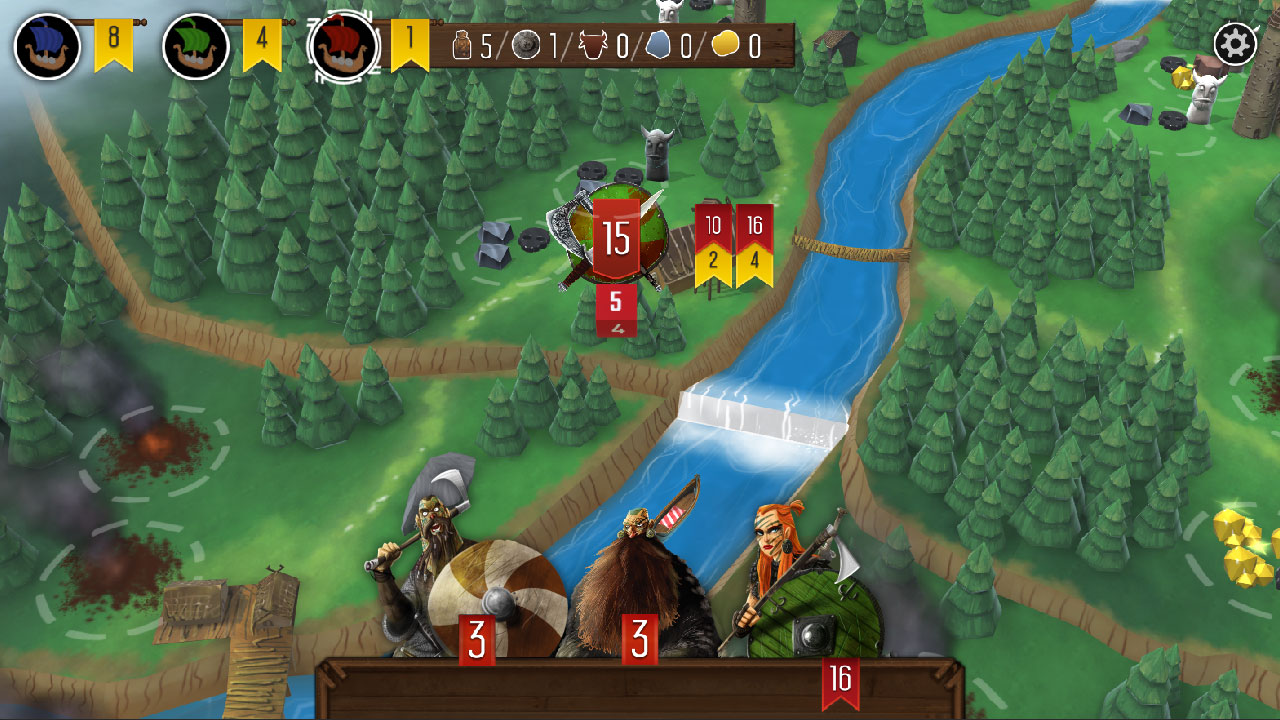 As with most board games, you and your opponents take turns in building up your crews, supplies and performing raids. Each of the target settlements require more resources the further inland they go, meaning you are constantly building your crew, gathering supplies and raising funds; all against the same objectives as your rival party. The more difficult the settlement to raid, the higher the reward, but the longer it can take to raise the necessary criteria to do so. Each of the figurines you place can have an affect on the building resources within your village. For instance, a black figurine may raise more silver or supplies than a grey or white one. However, some of the buildings can also affect the flow of gameplay with the ability to activate effects from the cards you hold, such as halving the cost of hiring crews to stealing resources from another player.

It’s a constant cat-and-mouse chase as you and each player fights to build the necessary crews to plunder the settlement of your choice. There’s a certain degree of tactical play here, as with any good board game, that requires you to be mindful of a series of actions from what is needed to build your party to what function is best suited to your current figurine, as well as trying hard to slow down any advances from rival players. Even selecting your target settlement requires thought, with some of them requiring specific figurines or items, as well as what treasures can be gained from performing such a raid. It’s here where the gameplay excels, with never a dull moment and plenty going on to ensure that you’re always thinking on your toes.

The objective of the game is to plunder as many settlements as you can. However, the overall objective is to acquire VP’s, or Victory Points. These points determine the overall winner, some of which aren’t necessarily obtained by constant plundering. Each of the settlements that you raid contain a certain number of resources, such as gold, sacrificial offerings and rare stones; as well as a total of Victory Points you can earn through successful plundering. In order to keep things competitive though, there are other ways in which to accrue these points to keep you mindful of opponent actions, as well as also keeping them on their toes. 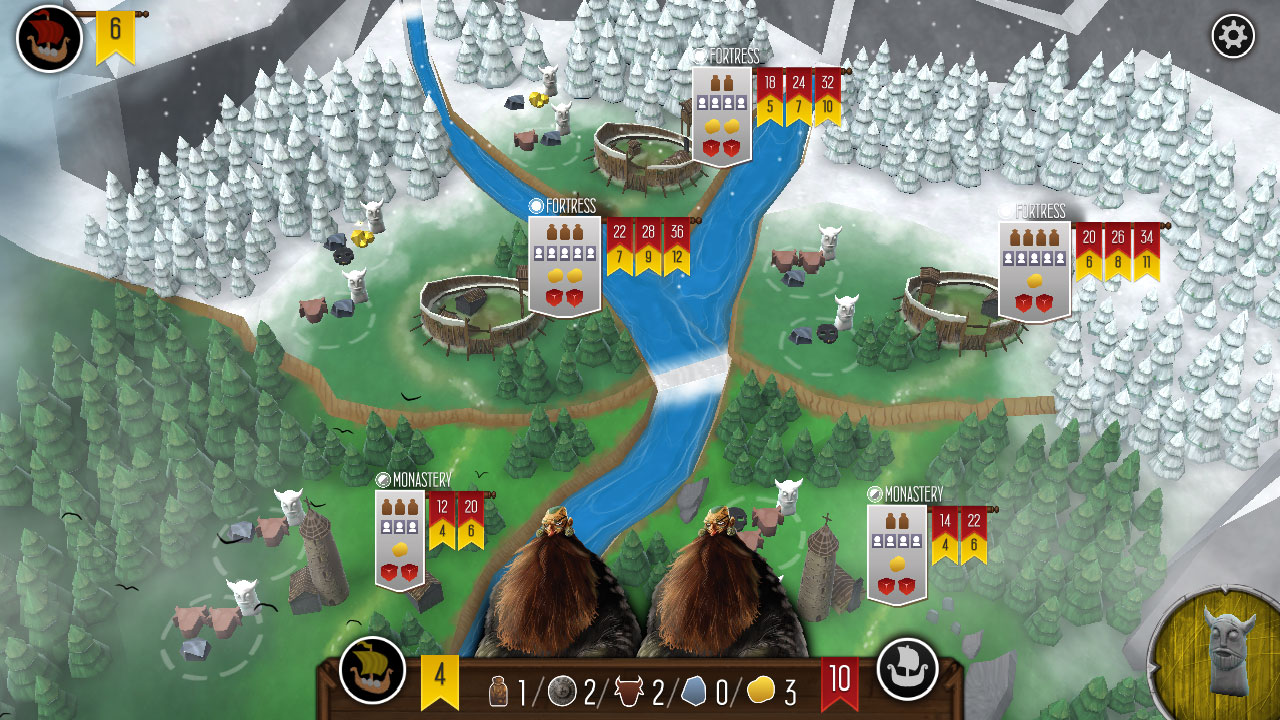 Although the game primarily focuses on strategy, there can also be an element of luck with the dealing of specific cards that gives you a choice of crew members for hire. Each of these cards come with two sets of abilities, some of which can grant extra incomes, whilst others can steal items from other players. However, some of these cards can offer extra VP’s with every successful plunder or end-game bonuses, boosting your overall total. Each of these successful raids can also award you specific types of treasures or livestock that can be offered in sacrifice in return for some substantial figures in VP’s; often leading to a pip-to-the-post finish. This in turn adds another layer to the strategic values of the gameplay and can produce some exciting finales.

The level of gameplay is suitably matched with a beautiful art-style lifted straight from the physical version of the game; bringing its static form to life with rippling waters, smoking stacks and sailing longboats. It’s audio qualities, although limited, match the game well and provide a good backdrop without being obtrusive. There are three main modes in which to play: the single-player campaign which spans ten-levels and offers varying attributes to the gameplay, online and couch multiplayer for up to four players and solo play against AI opponents. With a cross-play functionality, online games can be found but I did find this a little hit-and-miss. However, the AI is perfectly balanced to produce a single-player experience that plays more like a video game than a board game and in that respect, produces a game that forces you back time and time again.

Overall, Raiders of the North Sea is, in my opinion, the best digital representation of a board game I have ever played. It’s style of play and mechanics transition seamlessly to video gaming to produce an instantly playable title. The balance of its AI opponents is incredible, often making each playthrough feel as if you were playing a human opponent and its single-player content holds enough variation and longevity to keep this on your memory card for a long time to come. Online play is a little hit-and-miss with a full, four-player lobby rarely found, although you can play with up to four friends should you all own the game or share it. However, the game can also cater for local couch play which takes the game to whole new level of playability. If it makes any sense, this is a board game that plays more like a video game, but at the same time, is also a video game that plays an engaging board game. Set your inner viking free, as it’s time to start plundering in this beautiful adaptation of table-top gaming at its finest.

Raiders of the North Sea is the best digital representation of a board game I have ever played. It’s style of play and mechanics transition seamlessly to video gaming to produce an instantly playable title.