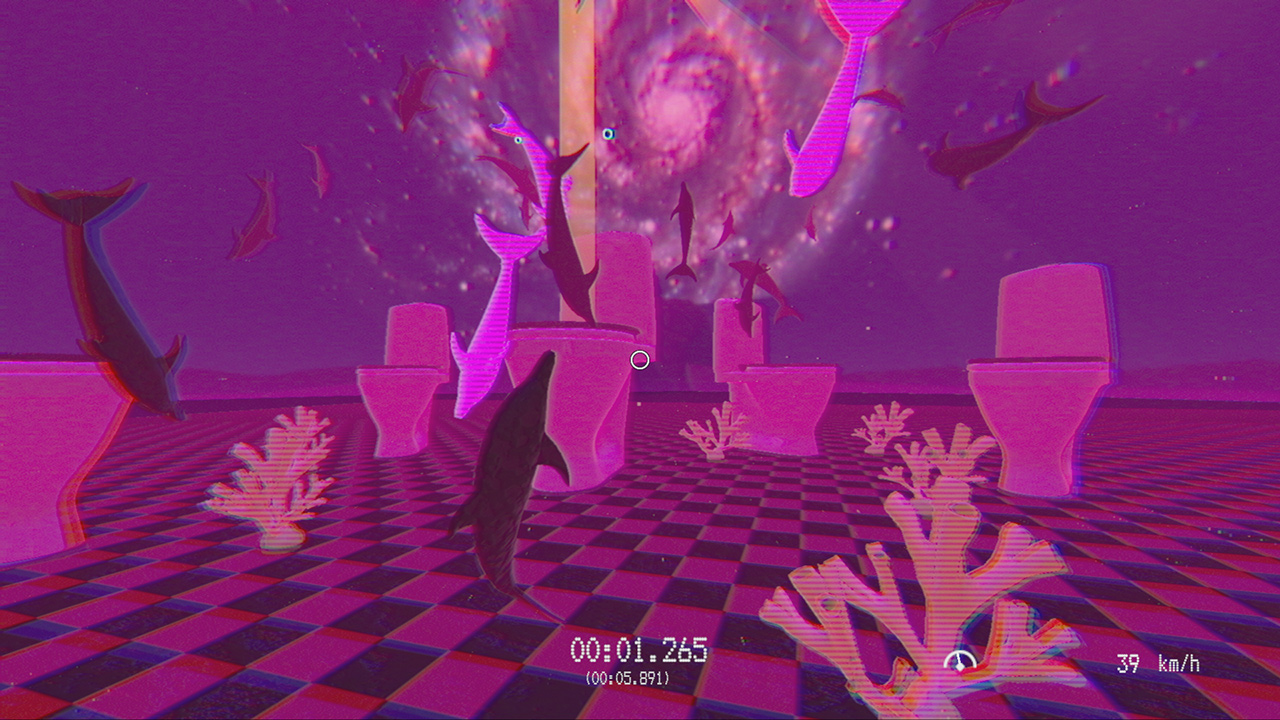 Verlet Swing is, as the name might clue you in, a game about swinging – of the Spider-Man variety, not the everyone-put-your-car-keys-in-a-bowl variety. Its main problem, I think, becomes apparent fairly early on when you realise that it really is just a game about swinging, and that there are definitely other, better games about swinging out there. (Of both varieties, I should think.)

That’s not to say that swinging in Verlet Swing‘s very idiomatic way isn’t fun as all heck in its way, though. It’s perhaps most reminiscent of A Story About My Uncle: played from a first-person perspective, you can attach yourself to various points in the world around you and go swinging from them on a pendulum, building momentum and flying off into the distance. At its core it’s extremely simple: all you’ll ever do is look (right stick), move yourself (left stick), or at least shift your weight so your trajectory meanders a bit, and attach yourself to something from which to swing (right trigger, or ZR if you’re playing on Switch as I was). It’s a simple case of holding down the trigger for as long as you fancy being attached by a rope of some unidentified magicalish substance, then releasing when you want to go sailing off.

It should feel intuitive to anyone who’s played any Spider-Man game since Spider-Man 2 way back in the PS2 days, actually: you’re attaching to a specific point in the environment, creating a tether whose length is defined by how far away you were from the thing when you stuck yourself to it, and the point at which you release will determine how fast you speed away and at what angle. A high release point will send you slowly upwards, then to crash pretty much straight back to the ground; letting go right at the bottom of a swing propels you straight forwards, skimming the earth as you pass at high velocity. Or, more likely, you immediately smash into something and die. 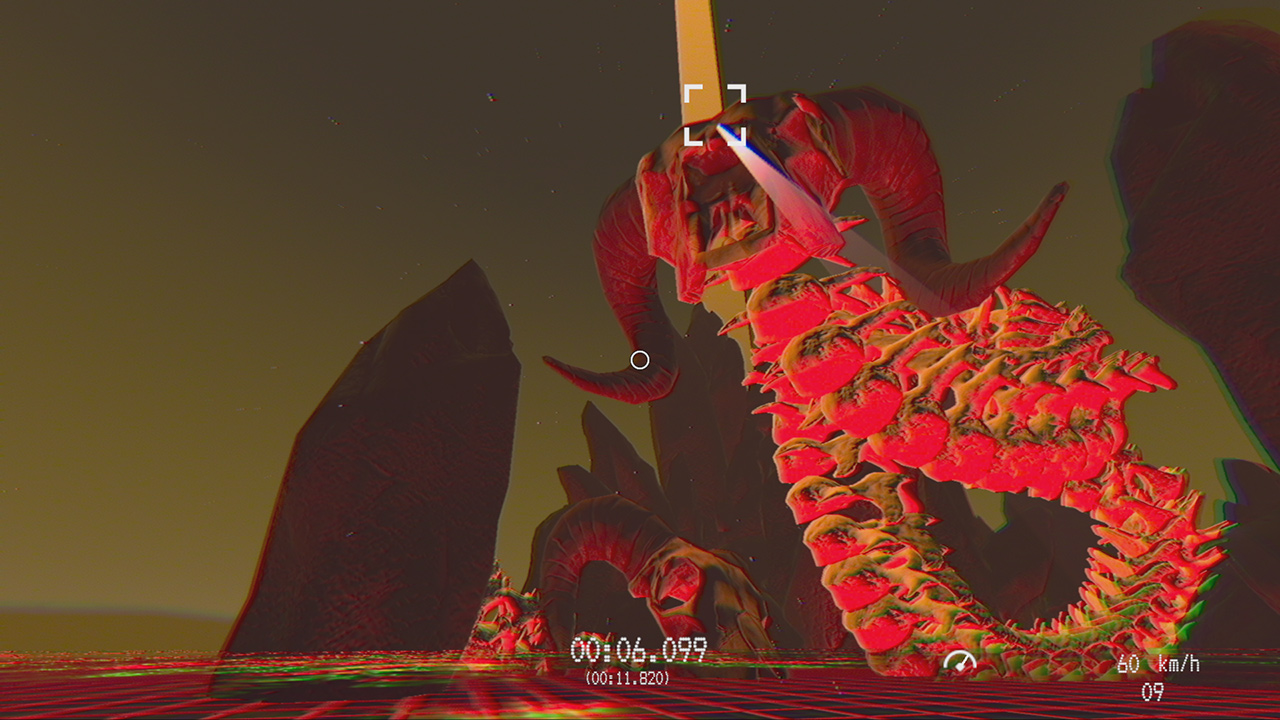 Well, I suppose it’s not really dying as such – you play as an unspecified being who doesn’t have any visible body parts, so who knows whether you’re a person or a robot or a possum or a slice of bread or an incorporeal concept like justice or something. Still, Verlet Swing involves a lot of very short attempts to complete a level in quick succession; it’s a bit reminiscent of the way Hotline Miami encourages the player to experiment and try lots of approaches as quickly as possible, rather than cautiously proceeding without ever losing. You’ll smack into the floor, walls, or various floating fish, pizzas, and other miscellanea many times before finishing a level, but they’re short stages and it only takes a couple of seconds to start, die, and be ready to go again. (There are no long loading screens, thankfully, or the experience would really suck.)

The aim of Verlet Swing is pretty much just to start at the start and end at the end of each level, swinging through psychedelic landscapes to reach the goal at the end without crashing and burning en route. It’s very much a casual gameplay experience – I don’t think that that in itself is a negative, but I do think that’s how the game has been designed. With no narrative to speak of, or any differentiation between the early and late stages of the game beyond their layout and visuals, Verlet Swing is one of those games you can just sort of pick up and play for a few minutes at a time, or however long you like. On Switch this works fairly well, thanks to the inherently semi-mobile nature of the platform, but I imagine it might be less of a satisfying experience if you’re on a more traditional home console and looking for something a bit meatier. I can’t imagine it working well on mobile, though; although it’s not complicated in terms of the mechanics available to the player, its visuals are often so pulsing and its level design so full of stuff that even on the handheld Switch’s decent-sized screen it can be really hard to tell what’s going on.

All that said, each of Verlet Swing’s many levels is imaginative and enjoyable to soar through, as well as offering a genuine challenge. The difficulty curve spikes hard early on; there’s an early level that I started to think I would never beat, but eventually things clicked and I just sort of got the hang of the idiosyncrasies of Verlet Swing’s physics. Once my brain had adjusted to be able to more accurately predict where a swing would take me, and then quickly begin the next one, the experience on the whole felt a lot more satisfying going forwards.

A well-delivered, if limited (the track only changes once every several levels), electronic soundtrack pulses in your ears as you fly through neon bizzarchitecture; there are a few stages, within each of which there are several levels, and each offers a different visual feel and theme. You might be traversing landscapes filled with ancient-styled sculptures, pizza slices, and ghostly fish one moment, and the next in a geometric explosion littered with electric palm trees. It’s sort of like the kind of vision of a cyberpunk future that might be dreamed up by the lovechild of Marcel Duchamp and Haruki Murakami. 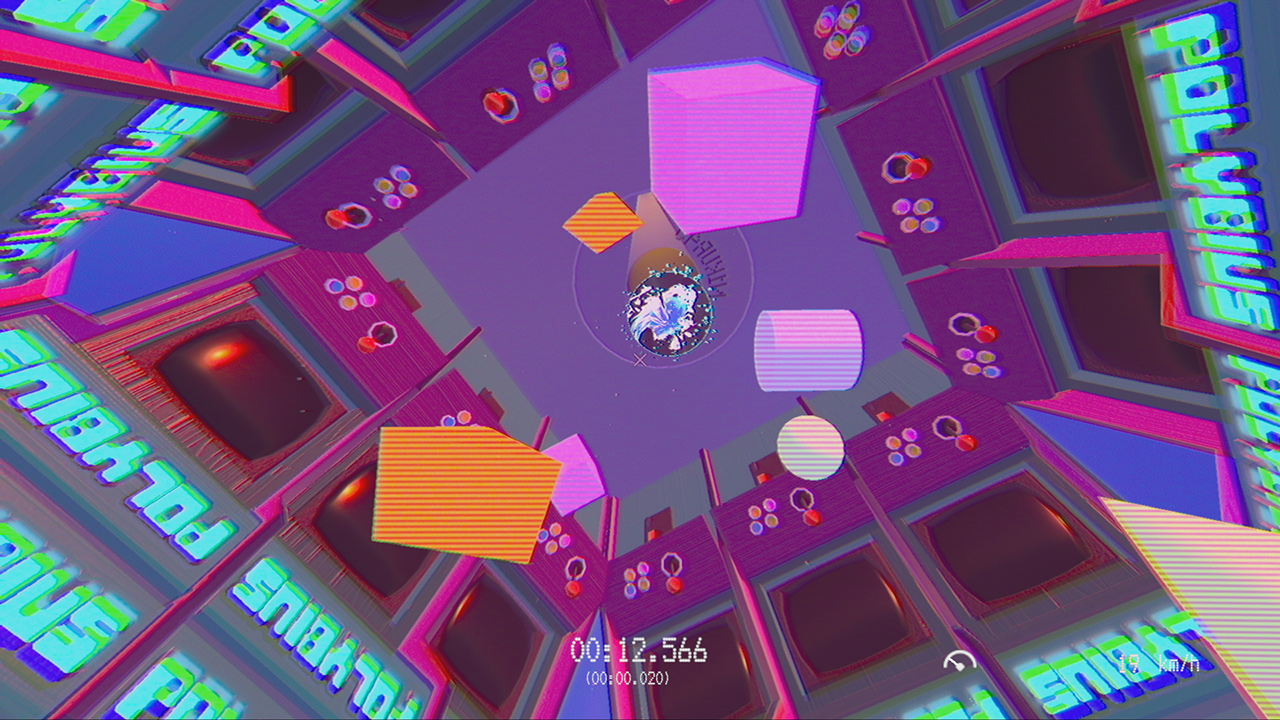 In terms of the design of each level (that is, the placement of things, not just the visuals), you never quite know what you’re going to get, with some stages being relatively simple swings from one to the other and some containing hugely tricky turns, narrow spaces, and moving tether points. The key, I’ve found, is getting good at quickly pointing your view at precisely the thing you want to grab: Verlet Swing will sometimes decide you’re looking at something just next to the thing you meant to swing from, causing you to fall straight down due to the ridiculous radius of your arc, so one skill that needs honing pretty early is a precise and accurate aim.

Things certainly do get tricky, and you’ll need to get ever more nuanced and precise with your movements, but you’ll never actually gain any new abilities as such. The swinging mechanic is really the only mechanic: you’ll never get, I dunno, the option to press a button and get a little burst of speed, or float or something. It’s all about developing your skill in this one area until it’s as good as it gets, and… well, that’s not a bad way to spend a few minutes, but I don’t see many people getting super into Verlet Swing. There’s a bit of replay allure in the presence of a time-ranking system that awards you a rank based on how quickly you complete each level, but you don’t get anything for that. Progress is simply getting to play more levels, nothing else.

At the end of the day, what you’ve got in Verlet Swing is a solid enough foundation with not much built on top of it. The wise man builds his house on the stone, not the sand, but while Verlet Swing might be stony enough I don’t think anyone’s done much more than lay a couple of bricks and call that a house. It’s a game to be played a few times just for the fun that can be had once you’re just about good enough to competently swing through a level or two and feel as if you’ve accomplished something with your epic swinging skills, and then probably to be put down and forgotten.

I tell you what, though: I’d love to play a VR version of Verlet Swing. I’d throw up everywhere almost immediately, but it’d be great fun.

What you’ve got in Verlet Swing is a solid enough foundation with not much built on top of it.