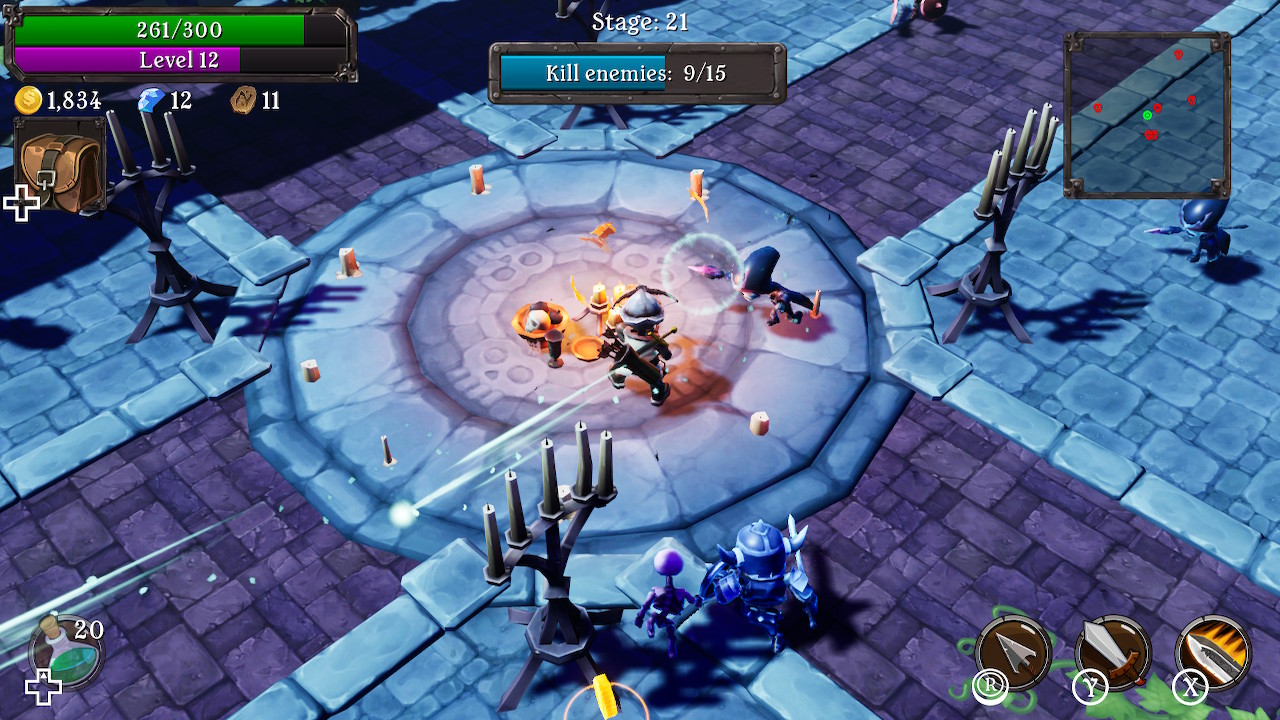 Sometimes, it can be the simple things in life that can be the most rewarding. The same can also be applied to video games, as I’m sure many of you may have found, as well as myself, that there are plenty of games out there that are basic in premise, yet hold copious amounts of playability; sometimes even out-doing a number of AAA titles that appear on our beloved consoles or PC’s. One such game comes in the form of MegaPixel Studios, Ultimate Games and Forever Entertainment’s Grave Keeper as it hacks and slashes a release upon the Nintendo Switch.

As you may have guessed by now, the game is a hack-and-slash, top-down brawler. You play in the role of a Bounty Hunter who finds themselves within the land of the The Forbidden Stronghold. This place is rich in treasures, but also guarded by endless fiends and large beasts; the most notable of which is the ever-ruling Skeleton King. Your quest, should you wish to accept, is to accrue as much treasure as possible, whilst fending off waves of enemies and countless bosses, in order to level up your character and equipment in order to face off against the ultimate might of the Skeleton King himself.

There’s a very simple premise and gameplay loop to the mechanics here. Each level offers an arena-style location that fills with waves of various enemy types. Using a variety of moves and weapons, you are tasked with wiping out a set number of enemies to advance to the next stage. Complete five stages and you get to face-off against a boss which rewards you with a chest full of new equipment, abilities and weapons. Should you manage to achieve victory over a further fifteen to twenty stages, you then get the chance to combat the King; a victorious bout offering higher rewards that provide a major boost to your base stats. 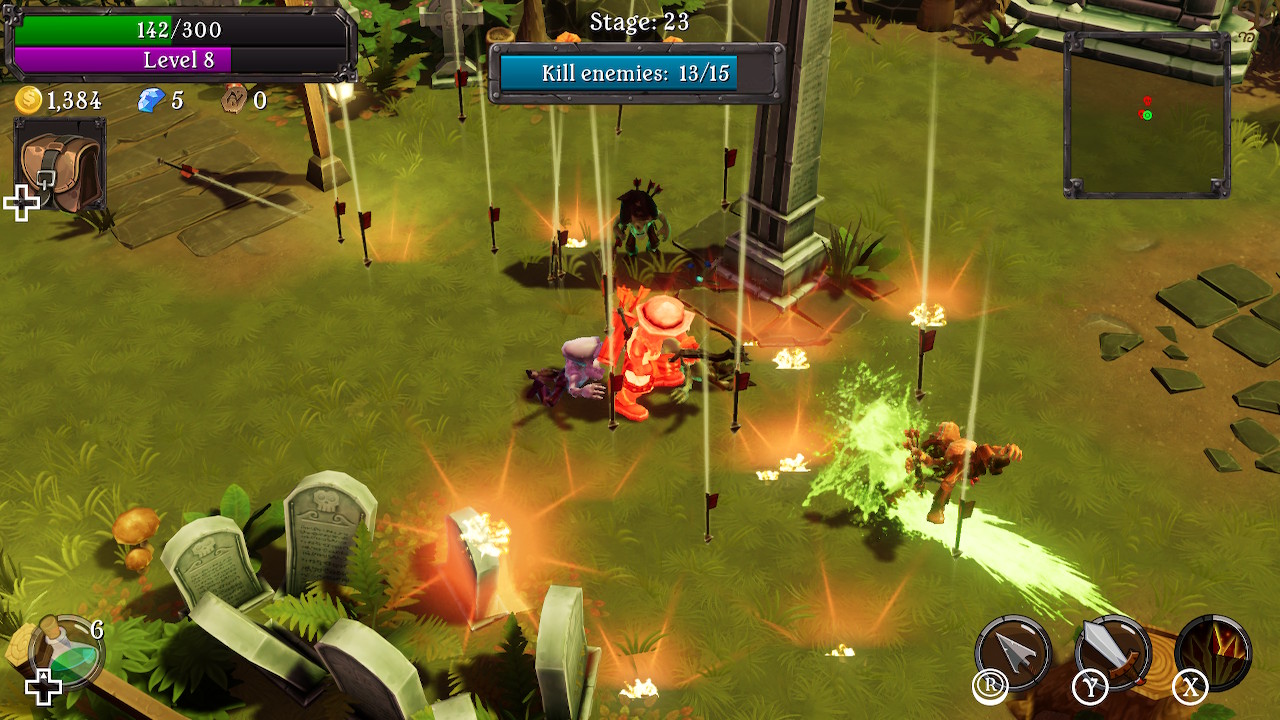 You have two main functions of attack with which to dispose of the demons that inhabit the land, as well as a special ability should you find yourself in a tight corner. Firstly, there’s your main melee attack which can host a variety of weapons from swords and axes. Secondly, you also have a long-range attack from your trusty crossbow. Last, but not least, you can activate a special move that can thrust your attack in a forward motion or a spinning whirlwind, as well as other variations such as a barrage of arrows that fall from the sky. The game holds an instantly accessible control scheme with each move being mapped to a specific button and your long-range aim being targeted with the right analogue stick; much like a twin-stick shooter.

It doesn’t take too long for each level to fill up with up to fourteen different enemy types; from crawling zombies to long-range archers. You have a health bar which determines your life force and you need to dispose of a pre-requisite number of foes in order to move on before you are overrun and you lose all your health. However, by accruing health potions, you can instantly heal yourself, utilised by pressing up on the D-pad, to carry on the fight. Should you fall at the feet of your foe though, you can instantly revive yourself to carry on within the level in which you met your fate. In fact, the main gameplay loop revolves around advancing through the levels, even reaching up to the hundreds, as you constantly accrue treasures and level up until you posses a full set of legendary gear in order to stand the best chance against your ultimate goal of defeating the Skeleton King.

It’s this constant form of levelling, loot collecting and treasure hoarding that gives the game an addictive quality. With all of the gold you acquire, you can upgrade all of your current equipment, whilst opening new chests can grant over one-hundred and ten different items to collect. This can alter the way you play the game or face each level, as each ability or weapon can offer differing strengths and weaknesses with their stat values. It’s a simple rinse-and-repeat style of play, one that is best suited to a casual style, but also contains enough variation to keep you invested. Each of the levels take place over eight different maps, which can lead to some repetition within the levels and general gameplay, but its lure of constant levelling and new items stop this from becoming a chore. 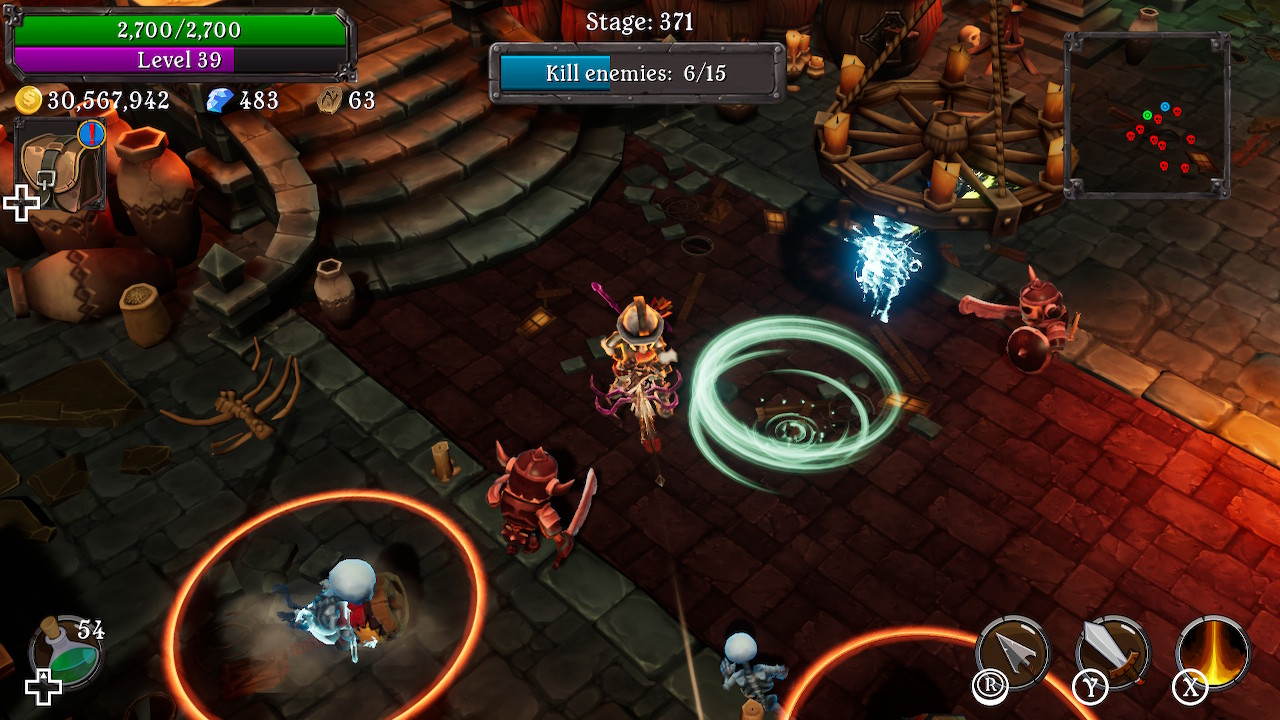 This is further enhanced by the game containing a copious amount of missions and daily tasks which can be fulfilled; each of which offers large monetary rewards, health potions and crystals which can be redeemed for greater rewards. It adds an extra level to the gameplay and a touch of depth, as you soon find yourself fighting to fulfil each of the criteria that these tasks set out; giving you a valid reason to keep on playing that changes on a daily basis. As well as the main campaign, which holds enough content to keep it going over the long term, the game also comes with a couple of extra game modes in the form of Versus and Royal Fight. The first of these, Versus, puts you up against another Bounty Hunter, which is an AI-controlled version of another player’s character. Should you complete a series of tasks within a quicker time than your rival, then you gain further rewards; all of which can be carried over to the main game to enhance your own character even further.

The remaining game mode, Royal Fight, is a co-operative experience that teams you up with a further four AI-controlled Bounty Hunters in order to survive an endless wave of enemies in a points-based game that offers further rewards. Both of these extra modes can offer something different to the core game mode, although the AI itself doesn’t really offer too much of a challenge and at times, can feel a little incompetent in what they are meant to be achieving. However, it never really detracts from the overall fun within each of the game modes that are available to you. Technically, the game runs sublimely on the Switch, even in hand-held mode. It’s graphical presentations are nicely done, running on the Unreal Engine, as is its instantly accessible control scheme that produces a satisfying gameplay-loop which is easy to play, yet hard to master, but ultimately addictive with its rewarding loot drops and constant levelling.

Overall, Grave Keeper is another example of those types of games that are quite basic in execution, yet thoroughly engaging and rewarding to play. It does contain a gameplay loop of a rinse-and-repeat style, but its pleasing aesthetics, luring rewards and constant levelling produce an infinitely replayable game. In fact, it’s been designed to be a game that you can drop-in and drop-out of at anytime, even reaching the dizzy heights of levelling up to hundreds of waves and levels and building your equipment to a legendary status that makes you feel truly invincible. It’s a game that is best suited to a casual style, but is guaranteed to be a title that you dip your toes into over the long-term and should remain nestled comfortably on your memory card for a long time to come. It’s a simple game, yet also a challenging one, but at the same time, is also a very rewarding one that draws you in time and time again.

Grave Keeper offers a satisfying gameplay loop that is both addictive and rewarding, making this a game that is definitely a keeper.