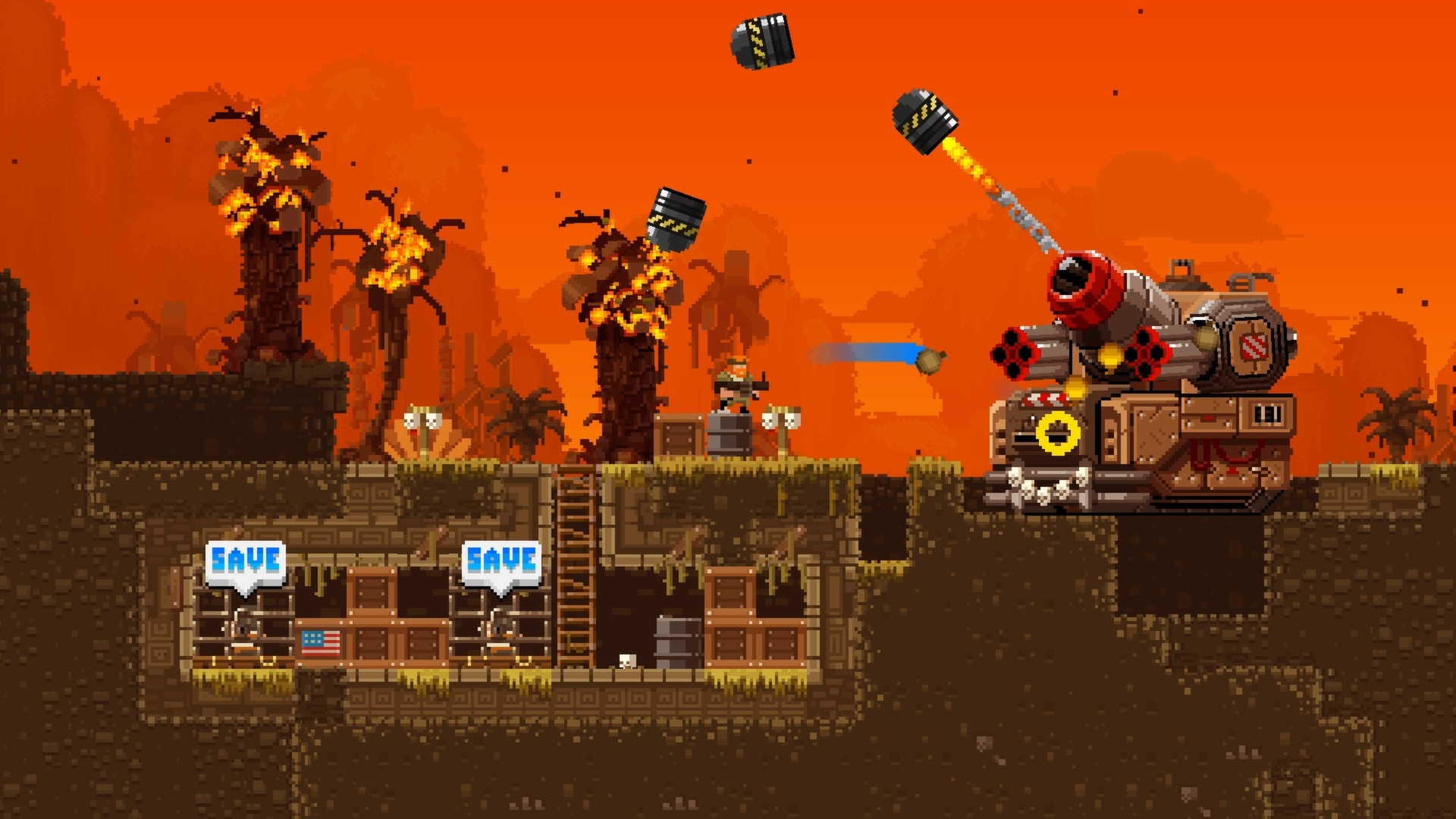 The Nintendo Switch is currently waiting, patiently, in the calm before the storm. After a busy and crazy summer, the little hybrid that could is on the verge of the next big surge in titles. With Astral Chain and Link’s Awakening on the horizon, plus the potential announcement of Overwatch coming, the Nintendo community is less than a couple days away from the giant plunge into a whitewater joyride of new releases, surprise updates (so happy that Nicalis is pushing out a Blade Strangers update!) and God knows what else. Oh, right, the Switch Lite. That’s gonna end up on my shelf before the end of this year, mark my words, and then I gotta figure out what to do with my current console. But, before any of that happens, it’s time to dive into the backlog and finally get to those games that I’ve been putting off for one reason or another. In this case, it’s time to roll up my sleeves, slap on a star-spangled bandana, and dive, face first, into the Devolver Digital actionfest that is Broforce.

If you’ve never heard or played it before on other consoles, you’re in for a potentially ridiculous treat. Broforce is an honest-to-goodness homage to all of the action movies of the 80s and early 90s, trying to capture the hyper masculinity, extreme violence and insane hyperbole of American conflicts at that time. You work for Broforce, a sort of paramilitary government branch that specializes in sending in just one fantastically muscular, highly skilled and particularly trained agent into different situations to free their fellow agents (who are also Bros) and defeat warlords, dictators, mad scientists and whoever other trope you remember from the exploding films of your childhood. Your character can only take a single point of damage before dying, but don’t despair! All the bros you rescue throughout the mission act as extra “lives,” meaning you aren’t totally screwed if you end up getting hit by a stray bullet, angry guard dog, or RPG that’s shot by a bad dude in a mech suit. 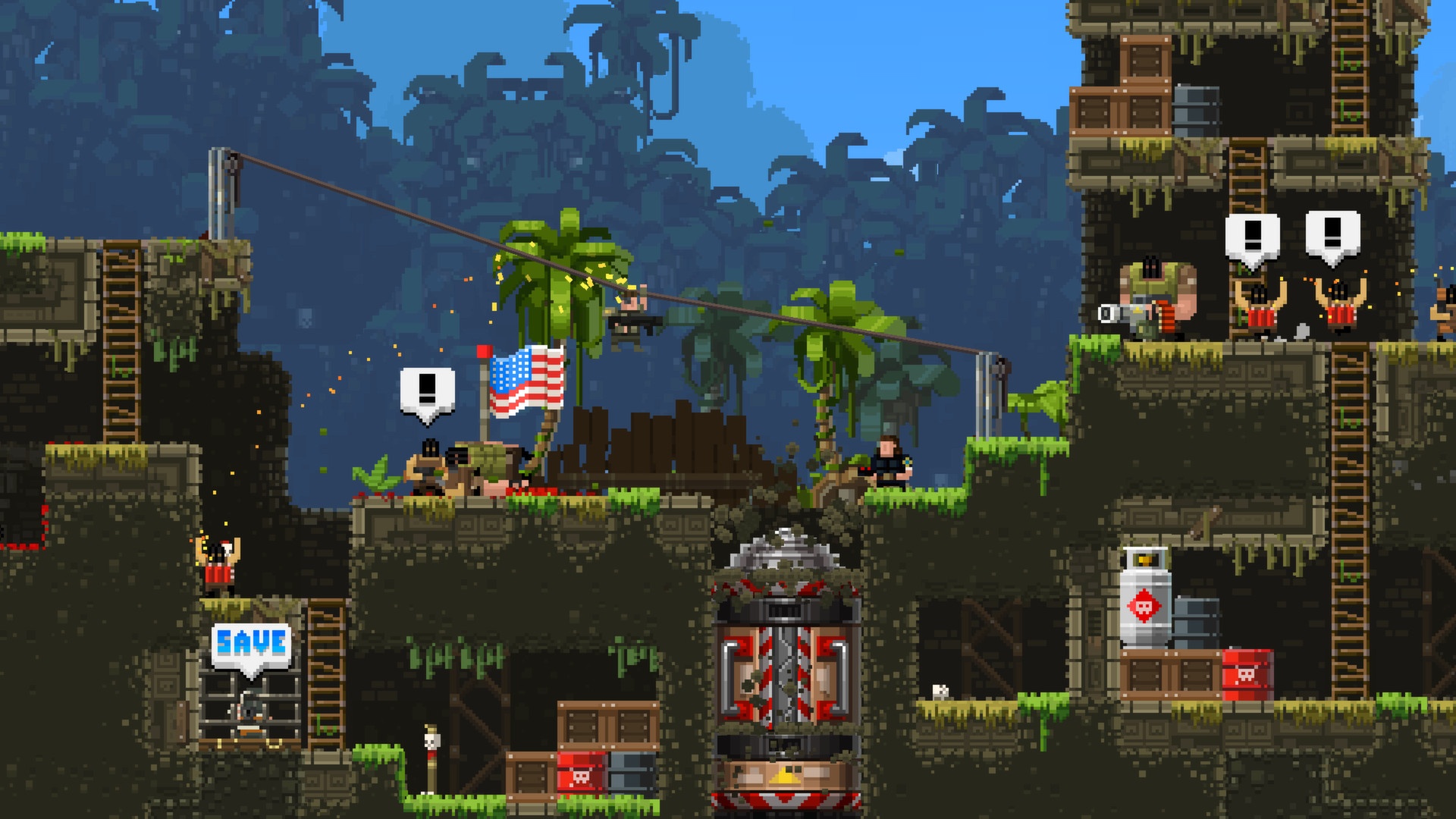 Broforce, just in name and style, does a fantastic job of poking fun at itself without actually ridiculing the centerpiece of the game, which is the “bro” culture. Rather than embrace toxic ideology or create odd, out-of-place situations, the game focuses on the original creation of the bro, which is the real brotherhood and support that could come from shared goals and ambitions. The result is the creation of more satirized characters than you could imagine, stretching from the original Rambro to Bro Dredd, and making sure to include female bros (like Tank Bro) and even alien Bros (the Brodator). The names are wonderfully absurd, sometimes stretching a tad far to make the joke work (Mr. Anderbro, a nod to the Matrix), but they keep the same vein alive throughout, and the inclusion of so many great movie characters and even other video games (Broden, the lord of Thunder!) keeps you amused throughout the whole experience.

A game cannot live just on the name and jokes alone, though, and Broforce makes sure to keep up the side scrolling action and difficulty to match the scenarios it seeks to emulate. Moving through multiple screens of highly destructible landscapes, Broforce forces your character to use their primary, secondary and limited charge attacks to carve a swathe of destruction and bodies in the direction of a common goal, which is usually blasting a chief bad guy off the top of a very tall building. Each and every Bro has a different combat style, so it can get confusing and sometimes quite hard to match a Bro to a particular level. The Bro in Black, for example, has a solid weapon that takes a moment to charge up for even basic shots, and the limited use “flashy thing” is incredibly powerful but can only work so many times. MacBrover, the MacGuyer character, works almost exclusively in thrown dynamite, resulting in a lot of carefully timed and planned explosive work (when you aren’t strapping dynamite directly to an enemy and watching them run into a crowd of their own cronies). The seemingly random selection of Bros to work with creates an on-the-fly strategy, resulting in some levels being repeated time and time again, or, when you get the Brolander (there can only be one!), the level seems to fly by. 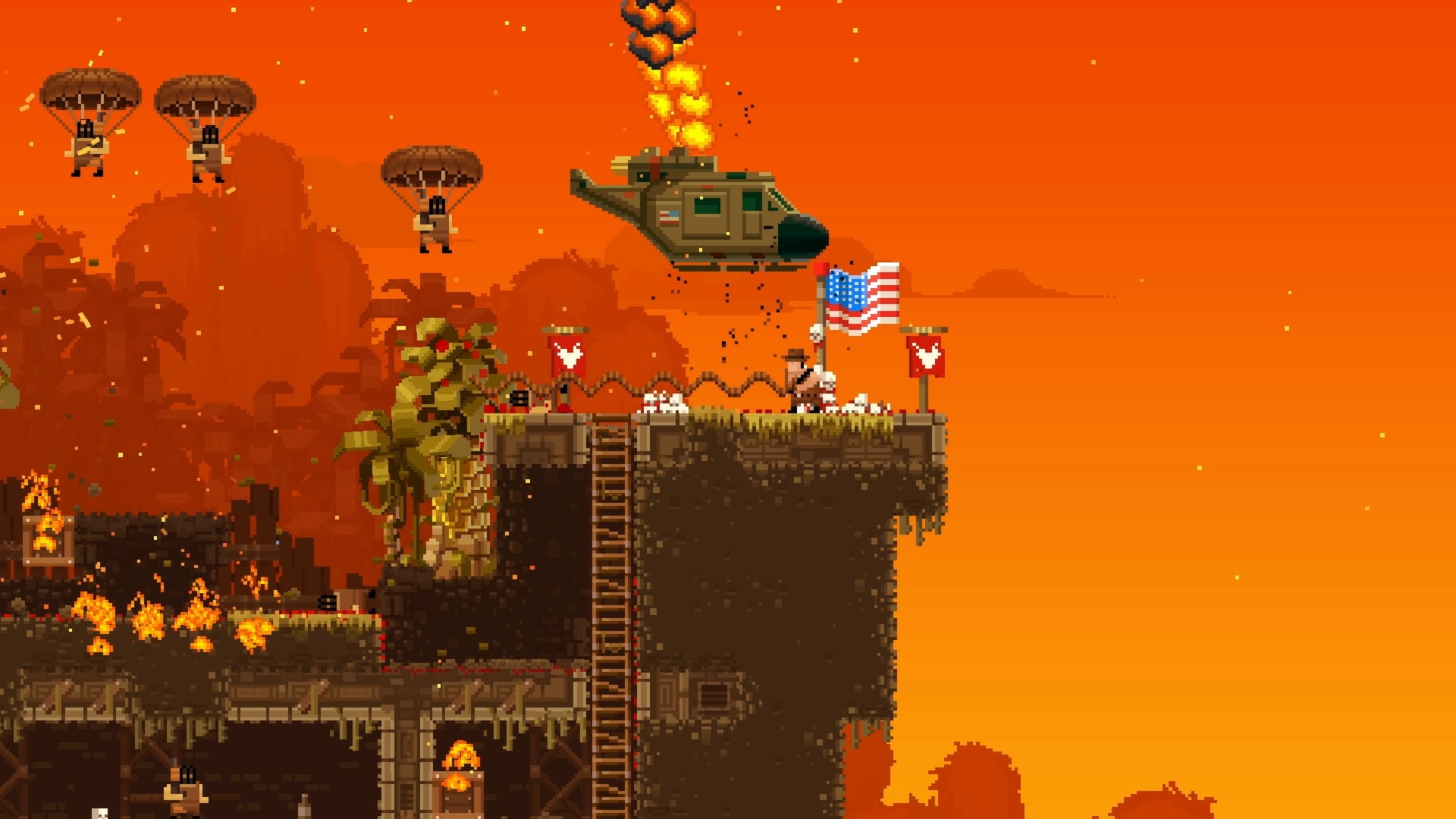 Naturally, in this game of bro power, you can correctly assume some co-op action, and it’s handled incredibly well. Broforce allows for drop-in, drop out action that makes for some of the most fun and spontaneous action that you can imagine. Much like the Expendables movies, the ability for a fellow Bro to suddenly appear, blow a bunch of stuff up and kill some bad guys, and then disappear because the pizza is here is marvelously done. As it stands, Broforce, despite being deeply complex with enemy variations, Bro versions and different goalposts, is a game that’s centered in action and mayhem without being pointless or aimless. In that regard, having friends either join you for the long haul in getting the highest body count possible OR simply coming in to do some fast “I saved you” action and then disappearing captures the spirit of the movies perfectly. Hell, the last update for this game was even called the Expendabros, and several of those elements are front and center in this game from the very beginning.

Not every game that comes onto the Switch needs to be mired in deep lore, fantastic storytelling or overly convoluted systems of mechanics and planning. Sometimes, you just need a gun, a knife, a grenade and a fellow Bro to take down the bad guys all over the globe. You want to see how many grunts and henchmen you can take down on the ultimate quest for freedom, and you sometimes go at it alone, and sometimes with someone else by your side. That’s Broforce: the choice of being a lone wolf or a full on wolf pack, complete with swords, revolvers, whips, lasers, and anything else that a Bro might bring to a freedom fight. It’s mindless fun without actually being thoughtless, and, in a world of overly concerned games, that’s sometimes all you need.

In a world where bad guys threaten the globe and everyone needs a hero, it’s up to the biggest, baddest Bros of all time to bring freedom to all.