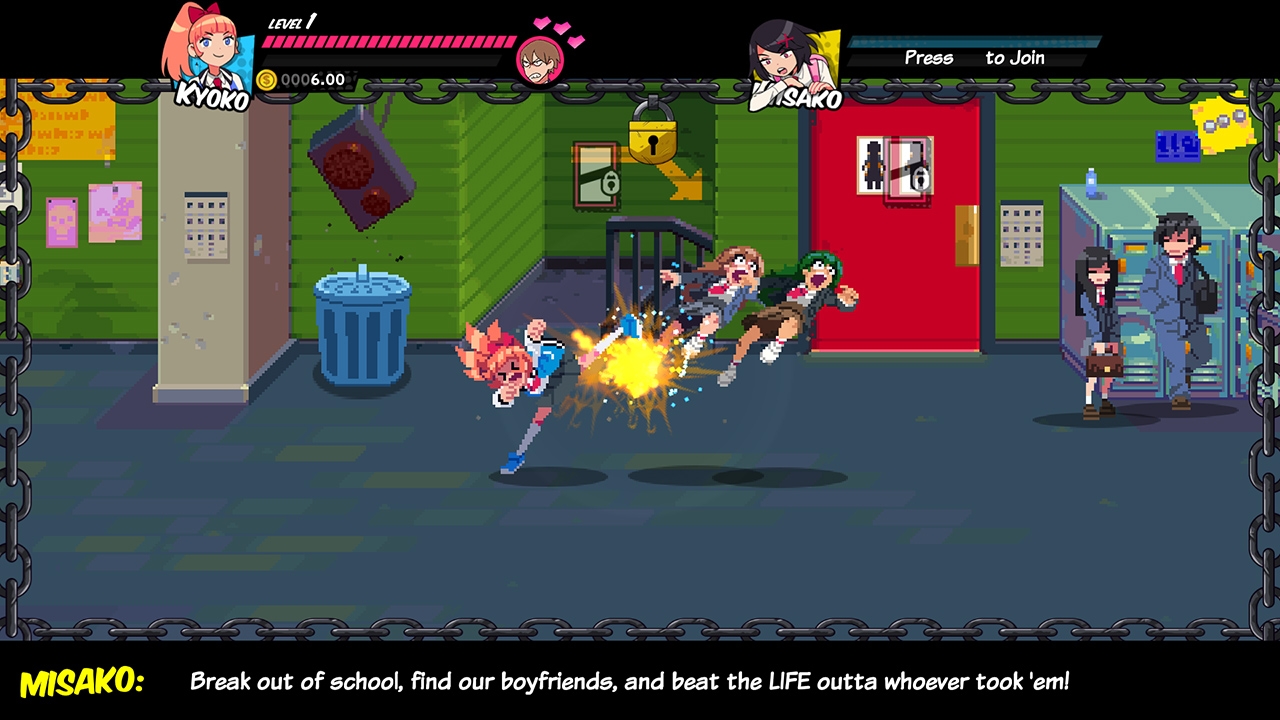 River City Girls is the latest installment in the long-running River City series, available on Nintendo Switch, PlayStation 4, Xbox One, and PC. You take control of battle hungry heroines Misako and Kyoko who, upon learning that their boyfriends and series poster-guys, Kunio and Riki, have gone missing take matters into their own hands. The store page promises 6 sprawling locations comprised of nodes (some of which are unlockable only by progressing in the story) to explore, manga style cutscenes, an all-star voice acting cast, and a healthy measure of challenge.

To that last point: for those unfamiliar with the River City games, there’s a learning curve involved with the play style as enemies will hit you hard and fast and there’s several ways to get stun-locked into taking heavy damage. In other words, this isn’t a beat-’em-up where button mashing will get you anywhere. I found River City Girls to be a little less unforgiving than previous entries, but the challenge is definitely still there. Your basic kit includes the ability to block (or parry, when timed correctly), dash, and combo together heavy and light attacks– both of which change into other moves when combined with the directional buttons. It’s you versus the world and every fight you tackle will be against someone bigger and badder than you–or at least more numerous.

Combat is satisfying and each attack has the necessary oomph behind it. Enemies drop money, which can be used on a variety of things. There are also weapons littered about the field of battle–commonplace things from heavy crates to yo-yos–and you can even turn enemies into weapons if you possess the skill to do so. This is all well and good and can turn the battle in your favour, but it’s worth mentioning that you can do more damage to yourself than the enemy with a poorly wielded weapon. I’ve managed to knock my character down on more than one occasion because the crate I tried to put down can only be thrown–after which it did a physics-defying series of bounces and ricocheted right back at me. 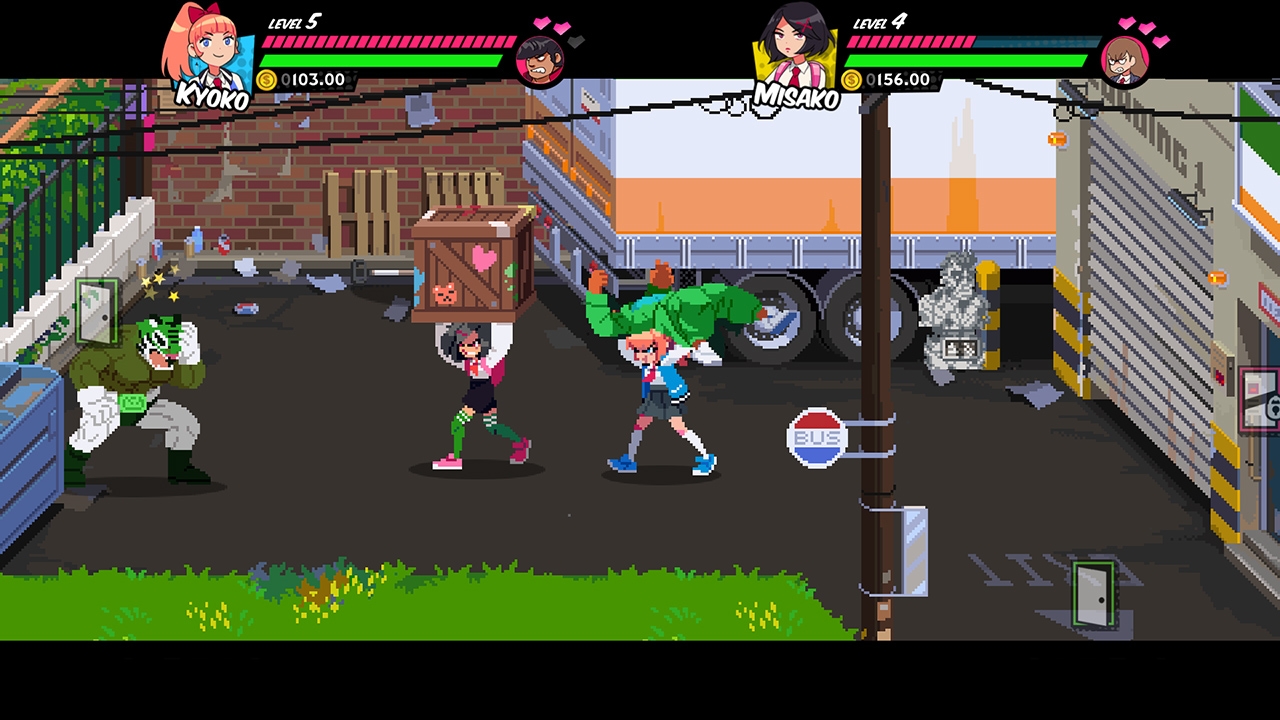 Despite having two heroines to choose from, River City Girls only allows you to pick one and stick to her. There’s no huge difference in selecting one over the other and the only other time you’ll see the second heroine on screen is when you’re in a cutscene or if you have a buddy to play with. I found it odd that River City Girls is local co-op only given that the game feels SO much more approachable with a second player. In lieu of having an actual second player, River City Girls gives you the ability to recruit fallen foes and use them in a sort of tag-in system like in fighting games. Support characters’ attacks range from crowd control to devastating combos, but unfortunately it’s fairly easy to miss these tag team opportunities completely. It’s frustrating to have your supposed support dash right past or fall just short of the enemy and some trial and error is required. Given the oftentimes unforgiving nature of the enemy AI, you’ll need to be a quick study.

Boss fights are standard fare: your opponent has an attack pattern that changes over the course of three stages. It’ll take a few tries to get them down pat, but being that they’re an actual 1-on-1, they’re a lot of fun. If you’re slain (and you will be!), you can continue your journey from the last checkpoint–for a cost. Other uses for your hard-earned money include learning new attacks, healing up/buffing your character, and purchasing new equipment. You have limited inventory for health restoring items, which is good considering how often you’ll take damage, and you can equip up to two accessories with a variety of stat improvements. Unfortunately, that’s the only real character management to be done as stats are distributed automatically. 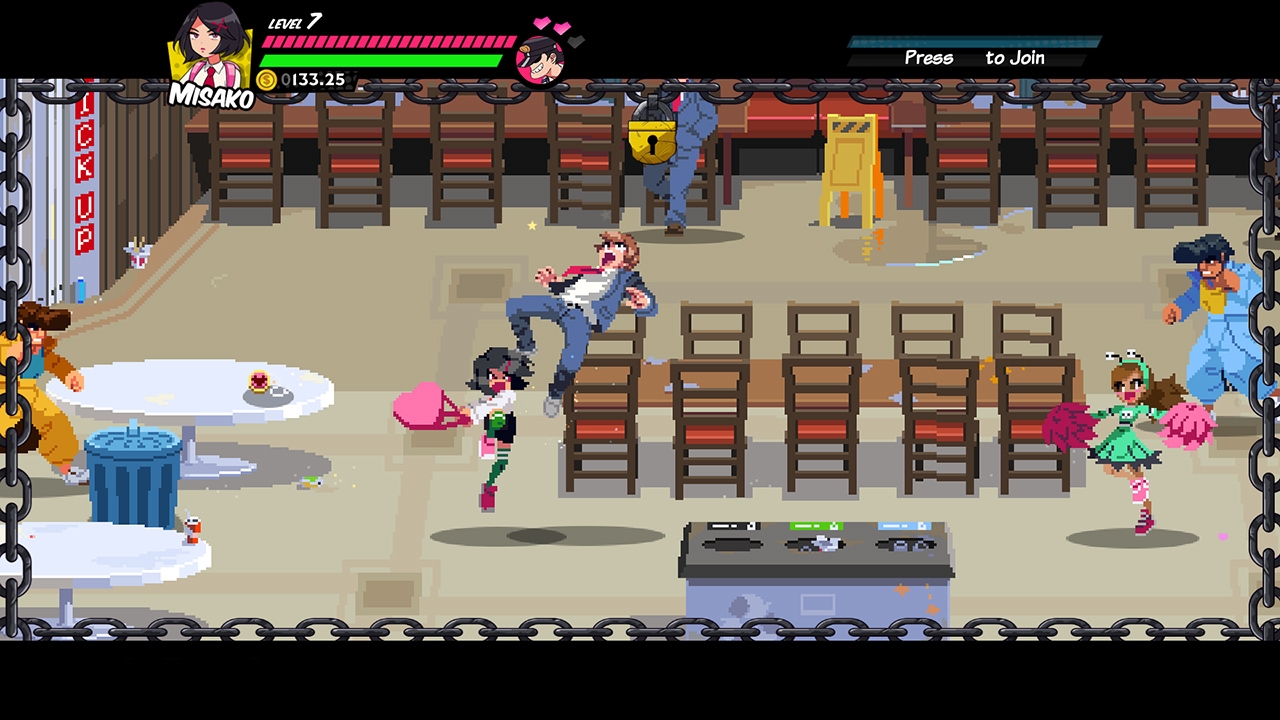 Also in the mix are side quests given by NPCs and some miscellaneous tasks such as stealth platforming to break up fighting sections. NPC quests are usually just fetch quests, but they’re still a break from the norm and the dialogue exchanges are amusing to read. There are also breakable busts of some familiar faces that serve as collectables hidden in hard to reach places and sometimes in plain sight. Can you find them all?

The music in River City Girls is fantastic. Written and composed to fit into the action, a lot of it has vocals and is catchy enough to have you humming along. The manga-style presentation is fitting of the sometimes over the top encounters, and the dialogue doesn’t pull any punches when it comes to making a funny.

If you’re a brawling ace, River City Girls will keep you engaged for the entirety of its admittedly well-written romp. Those who aren’t as committed to the genre may be alienated by the steep learning curve and high difficulty even while playing on normal. Whether you fall into the former or latter, there’s no arguing that River City Girls is a worthy addition to the series. It seems a waste to not have online co-op given that this game is one best played with a partner, but the polished delivery and engaging gameplay can carry you through even a solo run.

These girls came to chew bubble gum, jam out to some rad tunes, and kick butt–and they’re all out of bubble gum.