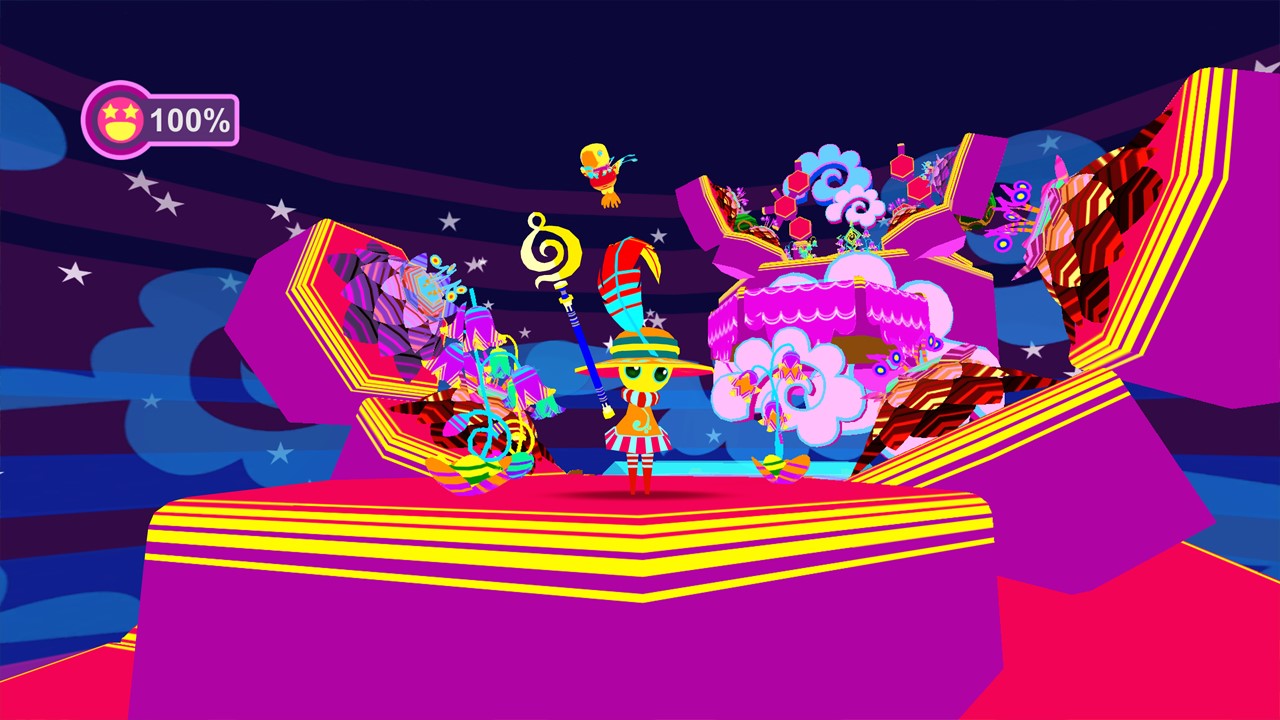 Gaming and playing games should be an avenue open and welcoming for absolutely everyone who is interested. From the hardcore eSports enthusiast who is working to fine tune reflexes down to a millisecond to the tired office worker who just wants a couple of minutes of escapism on the train ride home, we’ve achieved a level of gaming variety and saturation where almost literally everyone has choices, and sometimes for free, on where, what, and how to play. So it only makes sense that there would be games that are for children and for people who are looking for a less traditional, less competitive standpoint. When I encountered Newt One, a cute and visually striking title from DevNAri, I felt like I was told, time after time, that this would be one of those games that isn’t about the destination, but the journey, and the likening to titles like Super Mario 64, Journey and such further drove that point home. Perhaps it isn’t the title for me, so please take my review with a grain of salt, as I didn’t enjoy my time in the land of Groovy Hue.

With Newt One, you play Newt, a friendly and bubbly character who just got a new outfit for their birthday and couldn’t be happier. However, Newt realizes that almost no one else has shown up for the celebration, and is casually informed that something called the Great Slumber has landed in Groovy Hue and silenced the once vibrant, joyous land. Newt, not being one to sit around and do nothing, realizes that they can awaken the landscape through touch and experience, and probably make a few friends along the way! Armed with nothing, because it’s not that kind of game, Newt sets out to awaken owls, free parrots, paint trees and do everything else that you’d imagine in a game that’s meant to not penalize you at all, even though it kind of does. 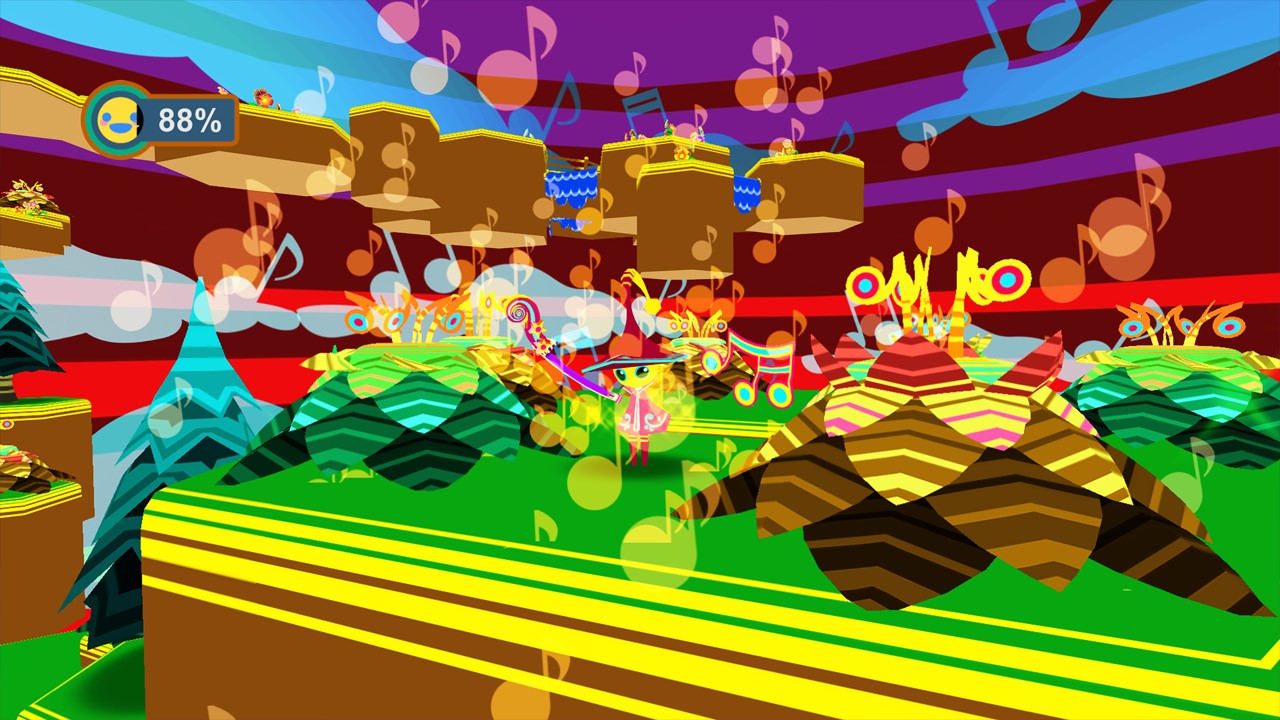 The presentation of Newt One is a 3D, 360 platformer that takes place from a 3rd person perspective. Each level, Newt needs to get all the way to the giant chime/goal at the end of the road, and it’s not necessarily the most straightforward path. You see, the landscape is asleep and grey, which is quite depressing, so Newt needs to touch EVERYTHING in order to wake it up. I’ll repeat that, in case you missed it: you need to touch everything. So if you touch a bouquet of flowers, you need to ensure you also touch the ground where those flowers were. If you see six trees, better make sure you touch each and every tree. The aforementioned owls are important to touch, because enough awakened owls serve as platforms to get you further along in the game, and there will be plenty of points where you can’t move forward without a few more owl friends to help you. There are musical notes that float around and, when you collect enough, Newt gets to change costumes and sort of transform into a different version of their self that is still very much Newt, just in fresher threads. And, yes, the Parrots are kind of a big deal, as they seem to be some of the bigger victims of the Great Slumber. A lot of the parrots are out of the way and can only be obtained with careful investigation and inspection to ensure that the level is really, thoroughly explored before you can get these talkative birds to join your cause.

Newt One has some floaty, odd controls that I don’t entirely mind, as they do fit in with the MO of the game overall. Newt can walk/glide, and Newt can jump. After a small period of time, Newt can also glide, holding down the jump button in order to cross great chasms, but this often presents a fundamental control issue for Newt. Holding down the jump button also causes Newt to hop, or to jump nonstop until the button is released. This means that, as early as the second stage, you run into separated platforms above the ether that you need to float to and have great timing/awareness to not immediately land and start jumping, thus catapulting yourself off into infinite. Newt One doesn’t have “lives” or “damage” to worry about, so falling off into the abyss just means automatically respawning on the last solid ground you touched, which, hint, isn’t the small platform you were aiming for. Naturally, you can make a kids game that’s more than simple educational tools or storybooks turned “games,” but it seems a tad unfair that you include a control scheme that involves really good response timing and spatial awareness that exists in ages that might be higher than Newt’s target audience. But I digress.

The presentation and aesthetic of Newt One is pretty spiffy and wonderfully colorful to behold, especially for children. My daughter asked me about the “pretty scarecrow” game, which I can see how she reached that identity from the thumbnail. Watching the world spring to life as you infuse every bit of landscape with energy and sound is a charming and exciting moment, and hearing the soundtrack come together in turn is a lot of fun. To be able to actually hear Groovy Hue slowly fight against the sleep and gradually turn up the intensity until the whole level is simply teaming with sound and life is fantastic. The music isn’t just classical tracks and orchestral filler either: there’s a good amount of electronic ambience and diverse instruments and elements to help create a full on soundscape that is fully varied from level to level. There’s a pomp and circumstance that builds and builds, and hitting that crescendo of a 100% exploration is met with explosive applause that really makes the success feel good. It’s not just that everything is awash in a chaotic mix of reds, blues, pinks, greens, purples and everything else, it’s that the whole game feels like it’s cheering you on, driving you towards that moment when you’ve gotten everything in a single level, and it’s still okay if you didn’t get it all! Only…it doesn’t always feel that way. 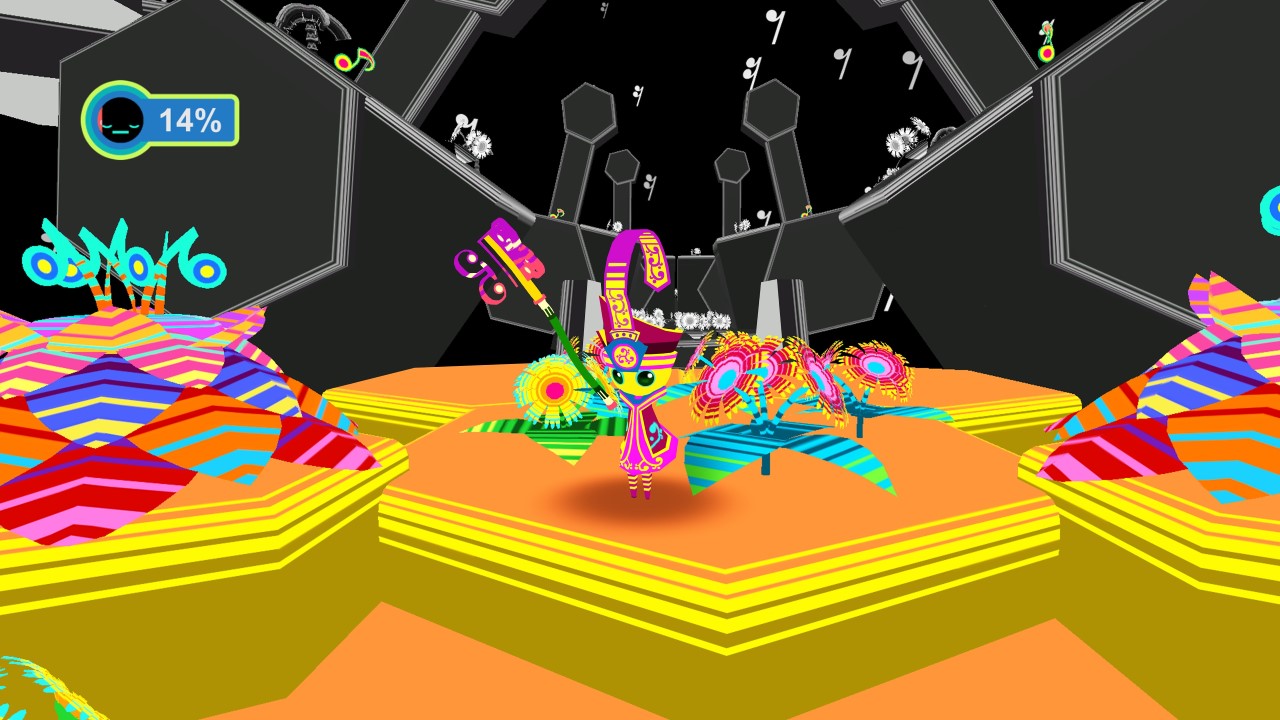 You see, like I mentioned before, you need to touch EVERYTHING in order to get that 100%. For Newt One, this can sometimes be tricky. They have platforms that rise up to help you when you walk to the right spot, but you’ll never know if they’re there if you don’t go that way, or walk in that specific line. It’s easy to overlook a single piece of ground or an errant bush when you’re taking in the whole of the landscape, seeing where and what you can do, and there’s a really, really negative feeling when you’re at the chime and see you’re only at 99%. The percentage meter doesn’t move accordingly with what you touch: sometimes a tree is a full 1%, and sometimes its a fraction of a percent and you don’t see any progress. But when you get to the last stage and are spinning the camera around, desperately trying to see the one small touch of grey that you missed, you FEEL that 1% in your damn soul. So now you’re going back, trying to retrace your footsteps, hoping that you can see the shadow sooner rather than later because it was a pain to get those hops and jumps just right, and you don’t want to find out it was a bouquet of flowers that was behind you at the very spawn point that you missed. The worlds expand dramatically by the third stage, offering full 360 degrees of exploration, and backtracking becomes a massive chore that you don’t even want to entertain even though the completionist within wants that 100% SO BADLY.

So the hang ups of Newt One might be personal, but they can also be an important thing for parents to remember before getting this title for their kids or themselves. Sure, it’s cute, and it handles mostly well (the game certainly plays best with a controller separated from the unit and not in handheld mode), and the story, presented through static cutscene panels, is cute and reminds kids about the importance of helping others and doing your best. But if your child is the kind of kid who needs to color every square inch of the characters before moving onto the next page, be careful: the nature of Newt One could make a single level take a long, long time to fully flush out everything, investigate, double back, and not leave a note, parrot, or grey tree behind. Again, DevNAri did a wonderful job of presenting a great idea in a game that tries to balance relaxation with actual gameplay, and no one is making you feel bad for missing something, but your own personality and reactions could feel bad, so please be aware. I personally will not be revisiting this game because I am a perfectionist, especially on something that seems implicitly easy, but my kids, who are much more relaxed, are looking forward to bouncing around this weekend as the “pretty scarecrow.”

Newt One is a great game for kids and adults who want to explore and relax, but be sure you’re already loose before diving into this completionist challenge.