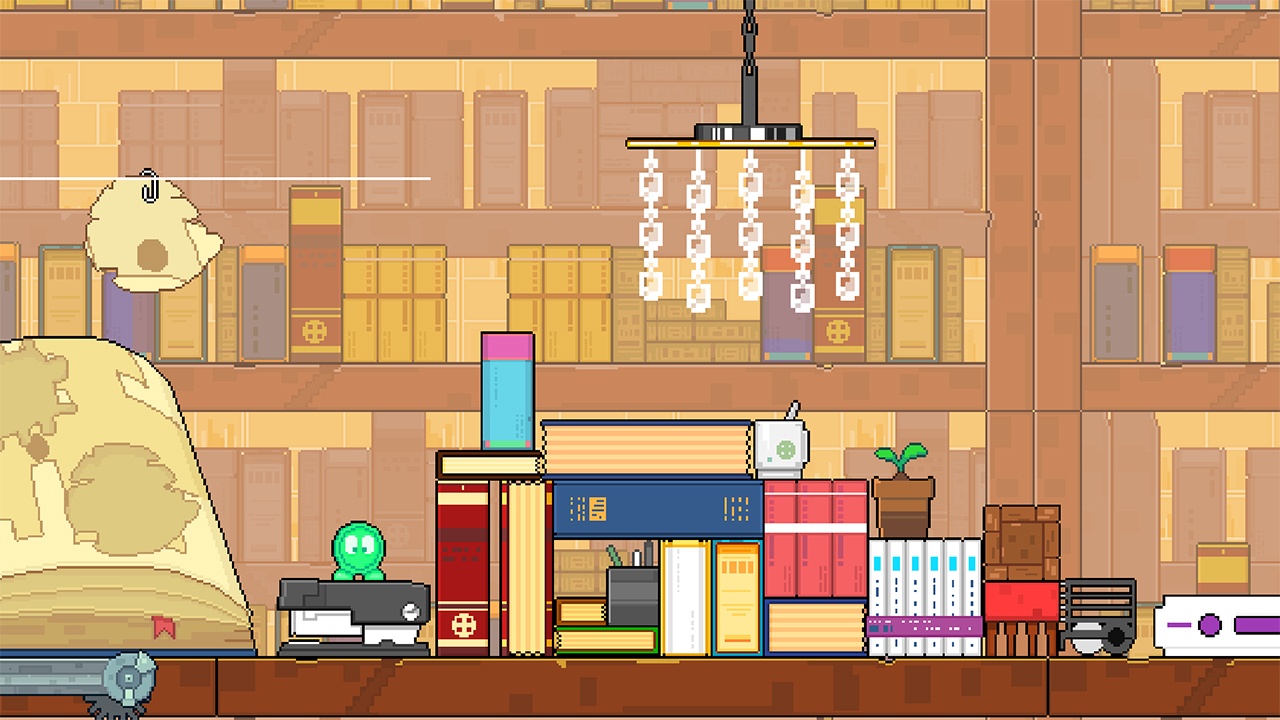 If you’ve reached this review, it means that you’re at least mildly curious about the co-op platformer named Button Button Up!, which comes to us from Centrosphere Games via CIRCLE Ent. Perhaps you were enticed by the retro graphics, the modest price point, or just the cute thumbnail of a cat-masked button running around. Any of these are valid reasons, and maybe they’ll carry you all the way to purchasing the game and dumping in a lot of time. Before you do pull that trigger, however, I’ll warn you the same thing that I wished I had known: bring a friend.

Button Button Up! is, at the core of everything, a co-op puzzle platformer. Of course there’s a single player mode, and there’s a versus mode that’s good for some silly mischief of the competitive type, but the heart and soul of this game lies in having a friend with you, on the couch next to you, to really sell the magic and make the game work for you. I mean, you need to understand there is zero story to speak of to drive the single player model forward. You are a button that has come to life through magic, but there’s also an entire society of buttons that already exists, so it’s not even like you’re someone special or something. Instead, you get to play through a series of levels, collecting items and working through traps (mostly cooperatively based) to eventually reach a series of bosses that are spectacular to look at but relatively easy to defeat once you understand the patterns and process of it all. Let’s not get too far ahead of ourselves though; let’s check out the game itself.

Button Button Up! Centers around just a small handful of controls. You can run, you can jump, and you can kick certain things and fellow buttons. The jump has a bit of tension feedback, so light touch for a small jump and press down for a longer, higher jump. The kick is used to open up treasure chests and move blocks that you need for puzzles, and, again, you can punt both real players and AI assistants to the spots where they need to be. Also, as a matter of course and cuteness, you can turn into a fully sewn button at almost any point. This is when you anchor yourself in the air for a variety of reasons, such as dodging projectiles or hiding from bad guys. Additionally, there are spots where you button anchor in order to move somewhere, like spinning circles, and you often have to work as a deflector for same colored light. That is to say, yellow light beams might terminate other buttons, but won’t hurt you (if you’re the yellow button), so turn yourself into an umbrella and block out the offending rays that might hurt others. Oh, and, when you’re a button anchor, you can also be a platform for other players, so you can kind of see how this whole thing works out. 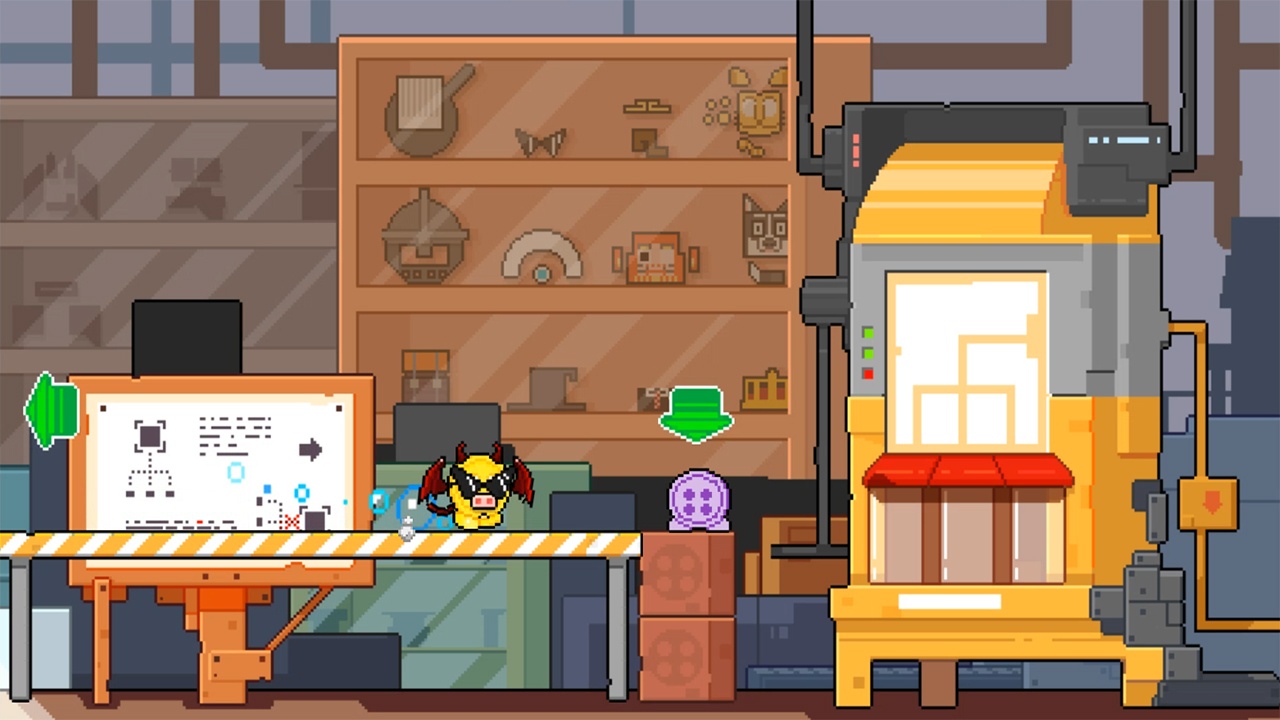 For the folks out there who need to find every secret and every Easter egg, there’s a bit ahead, but it comes with a caveat. If you’re a collector who enjoys aesthetics and accessories, then Button Button Up! has got you covered in spades. There’s a smorgasbord of both head accessories and facial “skins” to collect, and you pay for them all with an odd assortment of pickups that you find scattered throughout each level. For example, I was able to get a sweet daruma mask right away for the low price of five spools of thread and one sewing machine, and I was able to get about 30 spools and ten or more sewing machines in the very first level, so price isn’t an issue. Nothing costs extra money, just your time from hunting to get all the goodies, and you absolutely have zero effect on your gameplay from wearing one thing or another. This acts as a double edged sword, as I genuinely don’t reskin characters often, so the incentive to hunt down collectibles goes out the window unless I’m feeling the completionist vibe. So if you don’t dig unlocking hundreds of headbands and hats that you can only wear one at a time, that might be a downer for you.

Additionally, the levels are surprisingly long, which could fall either way. On the one hand, the longer levels in the co-op mode means more time working things out with friends, more time laughing at mistakes and follies, and more time to search for secrets and ferret out items (plus more time to enjoy the very retro and very funky soundtrack). On the other hand, if you’re feeling like you need to finish up or simply want to put down the game for a moment, you can easily get frustrated that the next screen STILL isn’t the ending and you’re still going. Don’t get me wrong, it’s refreshing to see a game that puts in serious consideration for variety in a single stage. Button Button Up!’s levels didn’t feel incohesive or anything like that: the rooms flowed together very naturally and really gave the impression of exploring an area. But that doesn’t mean there wasn’t a lot to it, and there were a couple times where I got tired and was thankful that I was a.) alone and b.) playing on my Switch to easily enter sleep mode. 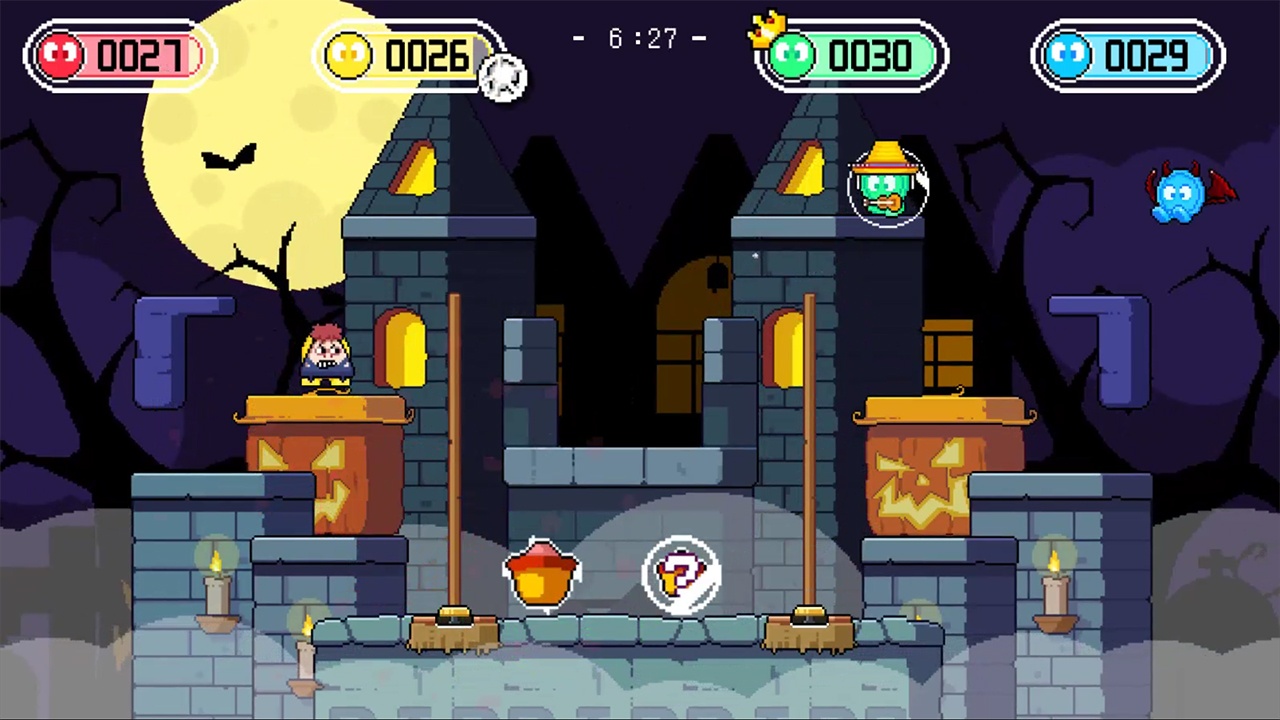 As for the game itself, Button Button Up! is quite clever in how the design plays out and creates great moments of patience and cooperation. By utilizing a lot of moving objects, targeted hazards and brief windows of opportunity, you have to develop your socialization skills with whomever you’re playing with, be it your wife, your child or your co-worker, who all pitched in to give me a few minutes of actualization. The levels for the co-op mode felt cleaner and more intentional, like the devs had a clear idea that this should be played with a friend. It reminded me a lot of Snipperclips in that you technically can play it alone, but it’s so much more boring without someone to work alongside. You have brilliant seconds where everything comes together and you navigate through a moving series of lasers or making platforms shift to just the right level in order to progress. It’s a serious moment of shared satisfaction, and it’s not the same as trying to be happy with how the random purple helpers did by not killing you, which is all they intended to do.

I suppose my biggest complaint is that the whole experience was fun, but it ultimately felt aimless. Button Button Up! is cute enough to stand on its own, and does well enough to create replay value (the versus mode of collecting and fighting are quaint, if short), but there’s just something missing to really make the game feel inspired or directional when you’re playing by yourself. It’s got a pleasant nature, plenty of variety, and a ton of costumes to seek out, yet it just didn’t click with me. I think that’s because I did do the co-op a bit, and that was significantly more enjoyable than alone, so please keep that in mind while purchasing. Have a spare Joycon or even a 3rd party controller ready to invite a friend into the journey. You can pick it up in no time, and, as long as you’re not the lone button on the road, you’ve got a great time ahead.

It’s cute, it’s competitive, and it’s got costumes galore, but be sure to have a friend or two on hand, because a lone button is a sad button.