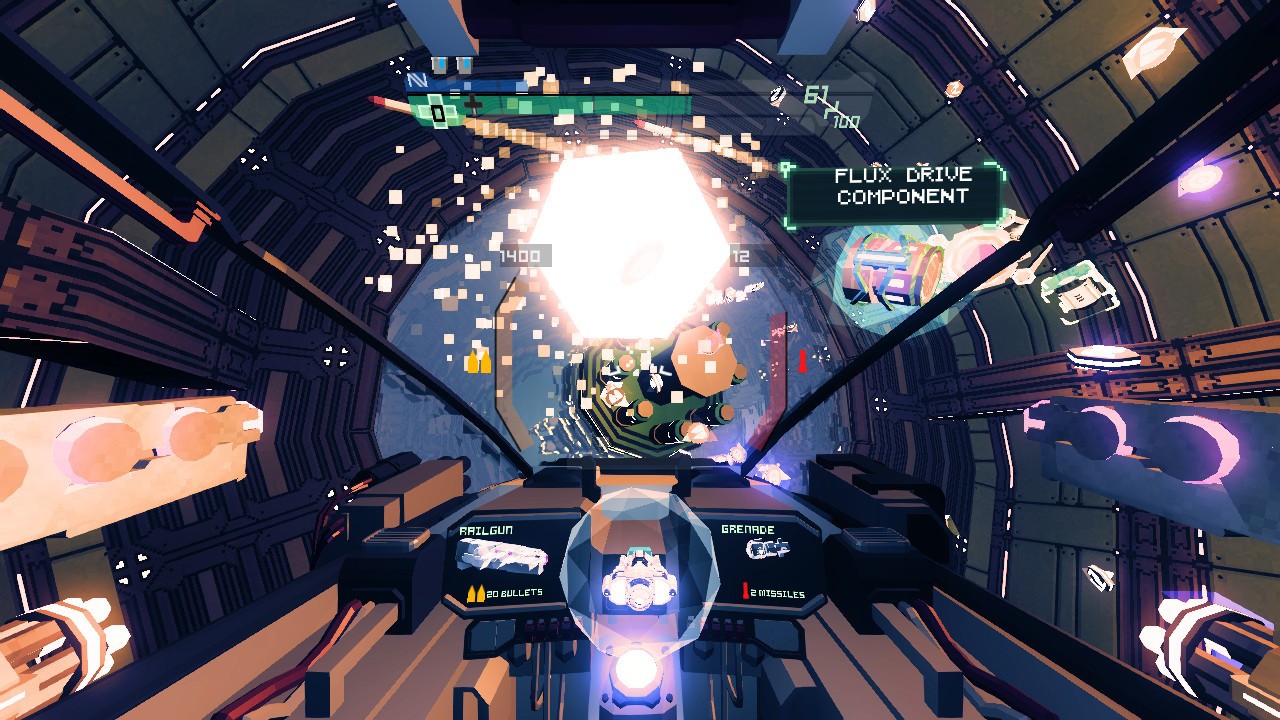 It was twenty-five years ago when Descent first descended onto an unsuspecting generation of gamers and MS-DOS users. It was the first true FPS, or first person shooter, to utilise an entirety of third-dimensional graphics, as well as introduce the subgenre of six degrees of freedom; in essence, the freedom of complete movement around the digital subterranean world it had created. In its time, it was a revolutionary form of playing video games and has since entered the realms of video gaming folklore, prompting a more modernised reboot scheduled for release later this year. However, if you can’t wait any longer for the modern revisiting to the past, then SIGTRAP games’ debut title, Subzero Level Redux may just scratch that itch for you.

It’s not difficult to see that this game wears its inspiration from Descent firmly on its sleeve, with a refined voxel aesthetic, six points of freedom and a whole host of subterranean levels to explore. However, in order to bring a touch of modernity to its style, Sublevel Zero Redux also brings with it the elements of a roguelike with procedurally-generated levels, no lives, no saves and a random-generation of weapons, upgrades and enemy placements. Building on its original release in 2015 on the PC, this redux version of the game also boasts an extra seventy rooms of combat, new enemy types and mechanics, such as the option for teleportation.

The story revolves around the very fabric of the universe falling apart and it’s up to you and your gunship to infiltrate uncharted systems and facilities in order to unlock the secrets of a forgotten technology that holds the key to salvation. Much like Descent, the game takes place within a series of claustrophobic corridors and confined spaces within a variety of subterranean locations. Battling in a zero-g environment, you have the complete freedom to move on your axis throughout each point of degree. From inside the cockpit of your gunship, you boost through the labyrinths of corridors, whilst swivelling on all axes throughout a series of rooms and gain a perspective amongst the myriad of mazes that comprise each level. 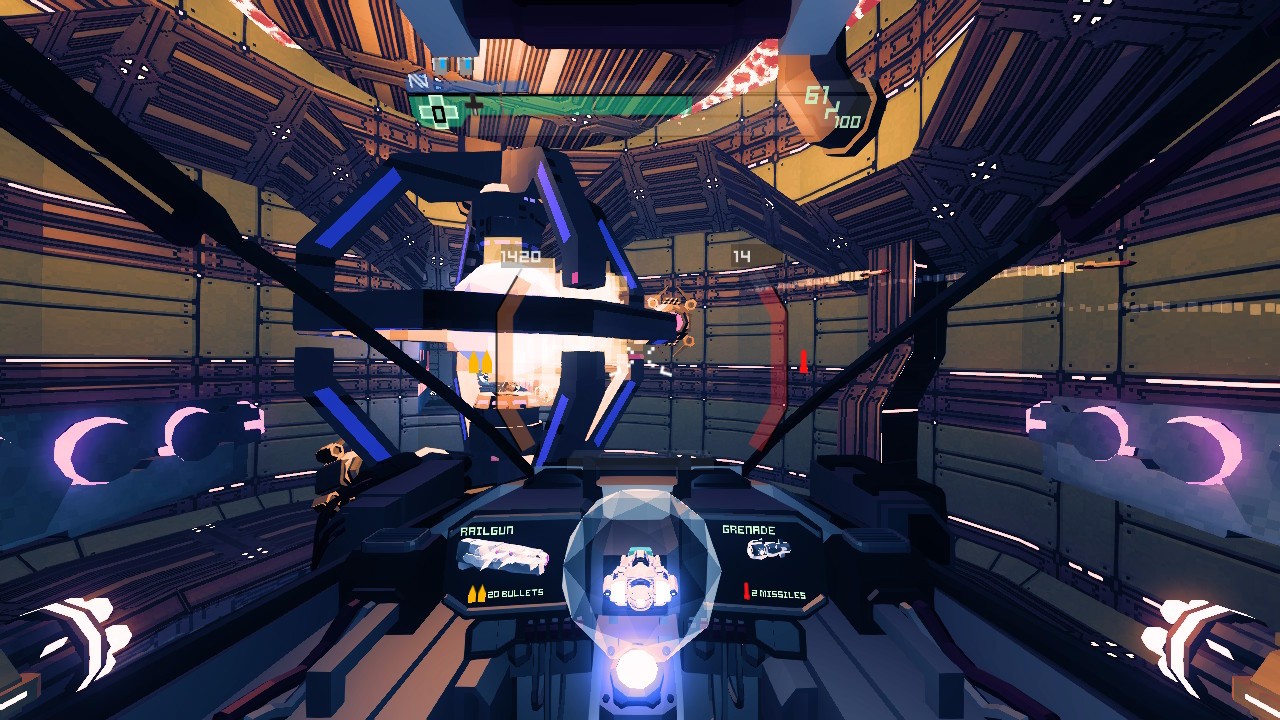 In terms of control mechanics, an easily accessible control scheme bolsters the fluid flying with a tightness and responsiveness that allows you complete control of all of your movements. It really does produce a smooth ride as you hurtle along and manoeuvre yourself freely around each of the levels. Its procedurally-generated installations produce a series of maze-like levels, all of which can be easily navigated with the help of an in-game map; provided you can find it first and adjust your bearings to read the situation. With a high level of control within your gunship, you can pitch, yaw and roll your axes to gain a bearing and find your way through each installation, search for the exits and locate any teleportation stations.

Your gunship comes with an energy meter, which when depleted means its game over and you have to start the game over afresh. However, to give yourself a fighting chance, the game contains a whole level of loot collection that can equip your ship with new weapons, upgrade existing ones and refill your meter. This can be achieved through destroying enemy types and locating loot boxes that are scattered throughout each installation. These randomly-generated weapons and blueprints can be equipped on-the-fly and also be carried over to your next playthrough, creating a stronger and more powerful gunship the more you play; provided you can find the necessary components with which to craft them.

From a variety of missiles to highly-accurate chain guns, the weaponry feels satisfying within the game’s combat mechanics. Despite holding a high level of speed and manoeuvrability, sometimes a stealthy approach needs to be taken in order to reach your final goal; especially during the early levels when your gunship isn’t fully upgraded. In some ways, it goes against the capabilities of your ship, but in others, it produces a careful style to the gameplay and, ultimately, a more satisfying level to the combat. After all, the more enemies you destroy, the more loot you gain and the more powerful you become. 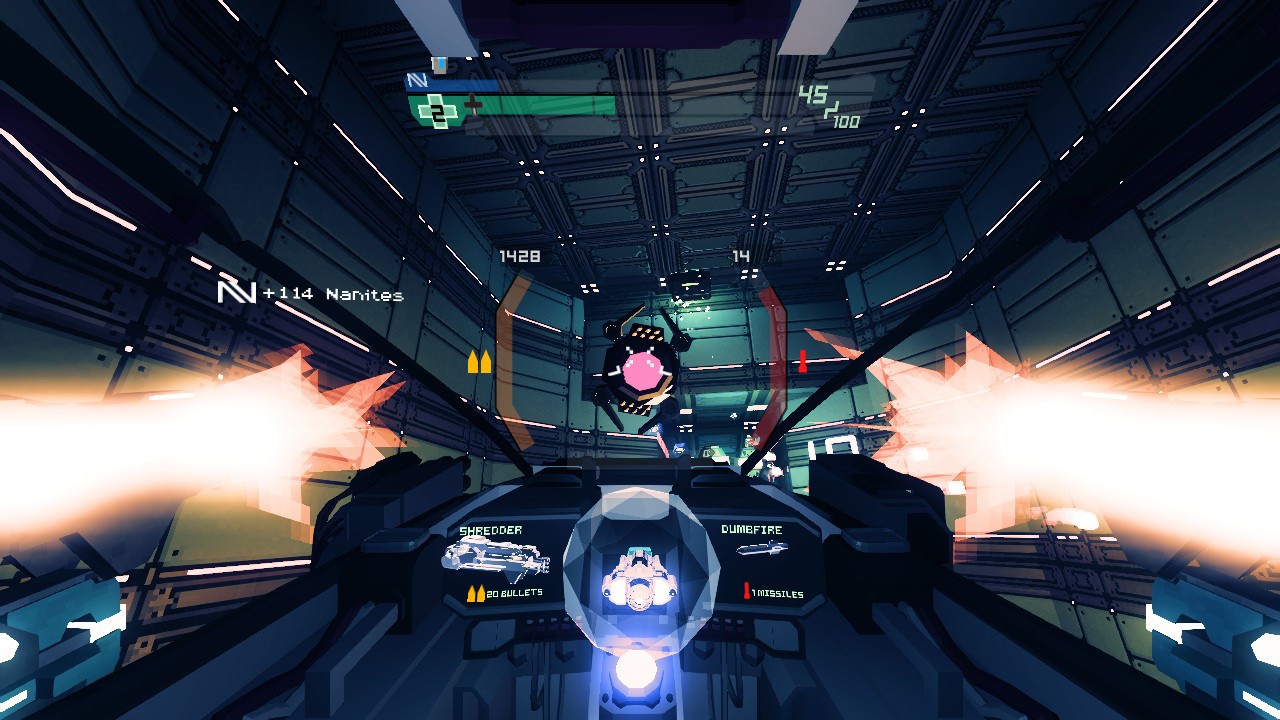 Each of the levels, or installations, provide a variety in what they hold; something that is fully bolstered with its random generations and layout. Teleportations allow you to advance deeper, numbered doors can provide easy mapping and some even require you to find and retrieve keys in order to advance. Its whole roguelike element ensures each playthrough is different from the last and the constant loot collection and ship upgrading makes you more powerful every time you play. However, it still cant escape a feeling of grinding and repetition as the core gameplay remains the same throughout. Despite that though, it can’t be denied that everything the game has to offer does provide a satisfying level of fun.

The Switch version of the game also boasts an exclusive motion-controlled aiming and look mechanic, allowing you a finer level of accuracy within the movement and combat elements of the game. In order to stay faithful to the roots of its inspirations, the game also contains an 8-bit style of audio that suits the game perfectly and never outstays its welcome. Its graphical presentation also contains a level of retro-style to its voxel appearance, yet contains a level of refinement and detail that gives a more, distinctly modern feel that is pleasing to the eye.

Overall, Sublevel Zero Redux is a blast of a game that captures the style of Descent in a pleasing and satisfying way. Its smoothness, tightness and responsiveness in its level of control provides a highly accurate model of movement and its constant challenge of traversing through its myriad of mazes pushes you ever deeper into its labyrinth of gameplay. Combat is punchy and satisfying, as is its level of loot collection, weapon upgrading and constant evolution, producing a roguelike that becomes more playable the more you delve into it. Yes, it can be a bit grindy and at times and frustrating with its roguelike elements. Its also quite repetitive, but it also holds a high level of fun, especially if played in a casual capacity, and with its ability to save on-the-fly, is an ideal drop-in, drop-out game that can be played at anytime. Essentially, it’s a relatively deep and satisfying shooter that should, at least, entertain you if you can’t wait for Descendent Studio’s reboot to arrive later in the year.

Descend into the depths of playability with Sublevel Zero Redux.