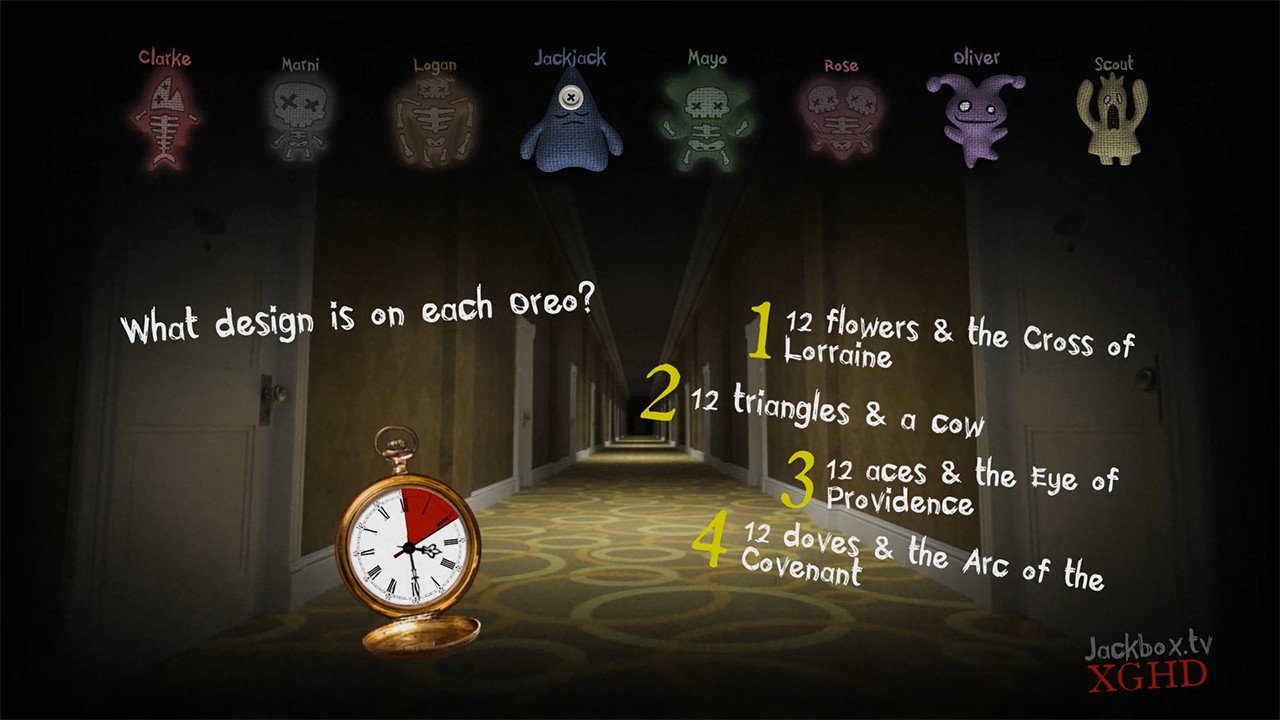 For me, the coming of the new Jackbox Party Pack is like other people watching for the release of this year’s Madden or Call of Duty game. It’s not as guaranteed as those franchises, but I know that there’ll be something familiar, something strange, something I really like and something that doesn’t sit well with me. As we are now on the sixth iteration of this franchise, it’s only natural that some ideas begin to take different shapes, and Jackbox is no different. To be honest, streaming and Twitching is the way to go, a fact that’s been baked into the Party Pack for the last couple of releases, but it’s none more apparent than in Jackbox Party Pack 6. I daresay, this is the version that clearly is gearing towards being a full on “party game” style of pack and less the familiar brand of raucous comedy that previous versions held.

Let me explain as we break it down. First and foremost, this still requires players to have a smartphone on hand, at least for the most part. The folks at Jackbox have graciously left in one game where you can not only do it single player, but you can still use your actual Switch, and I will argue that Trivia Murder Party 2 is the best game in the whole set. Returning to the concept of mixing trivia with horror (as previously seen in Jackbox Party Pack 3), Trivia Murder Party 2 now takes players, up to eight at a time, through several flights of scary mayhem in a haunted hotel, and the effect could not be greater. With the narrator having a sinister cross between Cookie’s strange wit and a properly menacing voice, players need to correctly guess the answers to random science and historic trivia to not only win money, but not become the victim of potentially deadly traps. Fail to survive the traps and you’re dead, and dead people can’t win a trivia game…can they? Be the first to reach the top of the hotel and escape before all hope is lost to be the winner!

These particular games are the ones that always brings me back to the Jackbox universe. They require some amount of knowledge, you can constantly be bombarded by non sequitur humor and ideas, and it’s equally fun with one or seven people, though everyone will argue that you need the most amount available. My kids can even play it because a.) there’s no actual violence and b.) you can just pick options, you don’t need to process so hard. At one point, my effigy got stuck with a hat from the narrator demon that reminded the demon of his father, and it turns out he hates his dad, so I got stuck doing every single murder save until he finally killed me, and, surprise, he wasn’t keen on me trying to win at the very end (solve trivia questions as you escape the fading lights), so I kind of felt doomed from the start there. But it was fun, it was a good pace, the trivia was interesting and could honestly be played by anyone, and played successfully by anyone in grade 3 or above. 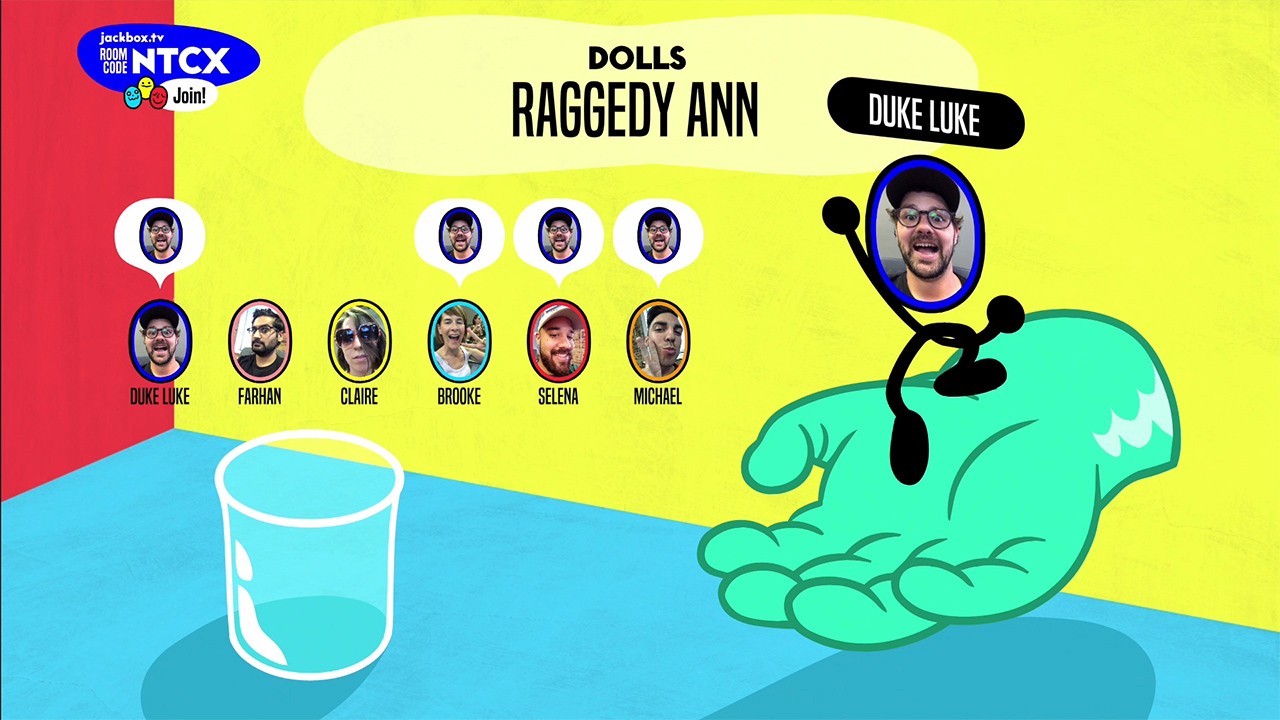 Joke Boat is another great hit, following in the footsteps of other “make up your own humor” titles such as Robot Rap Battle, but with a twist. On this one, you’re a cruise ship comedian who needs to create a bunch of words with friends a la Mad Libs, and then use overdone joke setups (How Many _______ Does It Take to Screw in a Lightbulb?) and then either make good joke efforts or terrible joke efforts, whichever you think will garner the best response from your friends. Oh, and if you’re not feeling creative or simply don’t have a solid punchline, the game can and will auto generate jokes for you, but they are genuinely “eh” at best, so only do this if you’re hoping your anti-joke friends will somehow find it funnier.

This, to me, feels like the quintessential party game that works nowadays, similar to the Cards Against Humanity crowd but with a potential for things going wildly better or worse. By having ridiculous mashups of old groaners and bizarre vocabulary (You Ever Notice How HARRY POTTER) can make for jokes that will only work in your circle of friends and, as such, get the maximum amount of points (You Ever Notice How HARRY POTTER Looks Like Dave After He Goes to Bonnaroo?). You can also use it to measure the temperature of a group of people by throwing in punchlines that are political, politically incorrect, wildly inappropriate or just so flat and dry that they’re killer jokes. Plus, the robots don’t read them: you gotta deliver your jokes verbally as they appear on screen, so it’s also great for people looking to build their standup career. Don’t be nervous, just tell your joke about Trump and oranges, I’m sure no one will fistfight you on the veranda afterwards!

Push the Button is also another great party game, and verifiably complex due to the required four person minimum to play (though I HIGHLY recommend maxing out the party). This is a digital version of games like Werewolf or Mafia, in which two people on a spaceship are actually aliens, and you have only fifteen minutes, as a crew, to figure out who is the invading xenomorph and jettison them from your ship. Problem is that the aliens look just like us, so we need to ferret them out…with opinions! Between questions about dessert toppings, drawings of spirit animals, and trying to describe how things look or sound, the alien players need to keep it close to the vest and do their best to make sure they don’t get caught, and the crew need to be sharp, eagle-eyed and ready to admit their best friend of twenty years is actually a brain-sucking Venusian.

Push the Button is great because it balances that perfect mixture of what the game brings to the table and what players bring. When everyone is on board and ready to play this in a fun, crazy way, you end up with a real cast of characters who are determined to turn the game into a hilariously angry version of the standoff scene in Reservoir Dogs. You can figure out how to play the alien character without being too obtuse or evasive, and the humans will absolutely turn on each other and suspect themselves without any evidence to the contrary. Aliens will need to work together with humans till the last minute, because certain tasks could jeopardize everyone, and they need to maintain the illusion. As long as you don’t have one of those spoilsports who holds up their phone and shows what they are, this is a great game that lasts about as long as a regular TV show, and is honestly better than watching reruns of Friends (plus you’ll get to actually hang out with friends!). Again, Jackbox, thanks for making your games playable across the Internet if we’re not in the same room: I can’t just fly to where my siblings are everytime we want to play, but I can livestream my PC and they can play from their own homes. 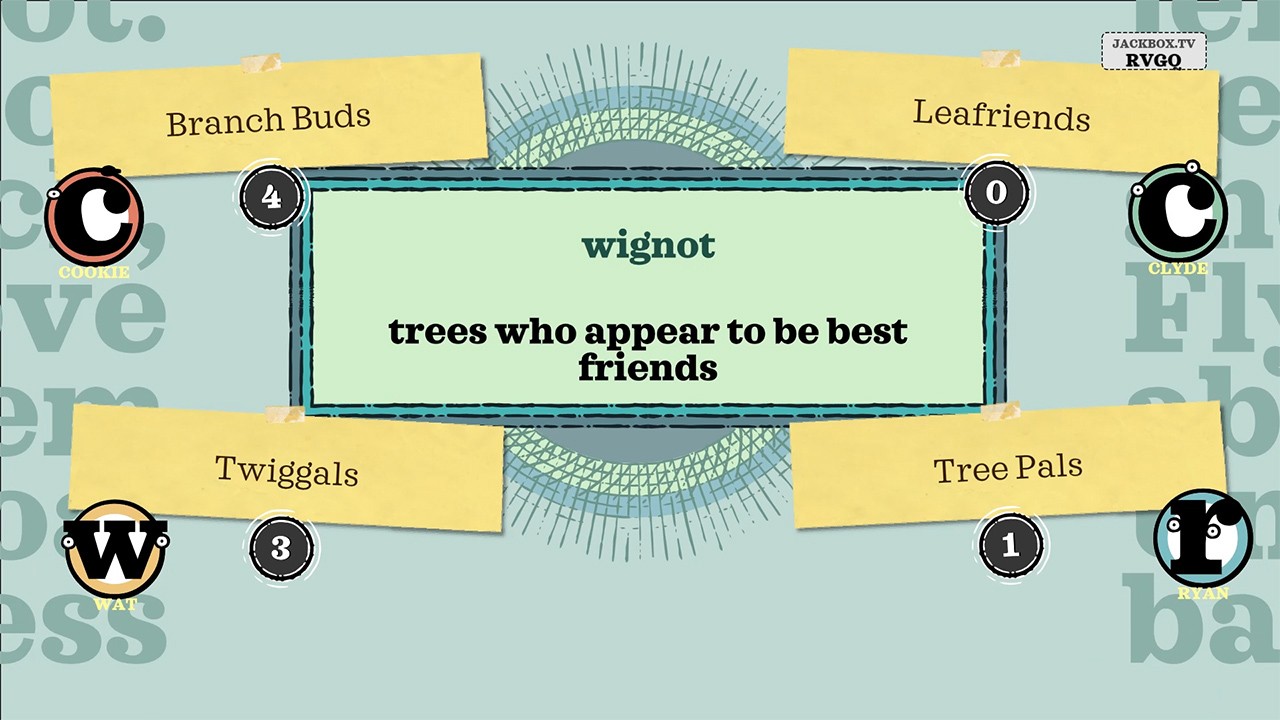 The next two games are…fine. They’re fine. They’re absolutely not my cup of tea, but they’re fine, and I can see where they have their purpose. Dictionarium is about creating word definitions, and this could probably work better with the right group of people. You each get the same word, everyone comes up with a definition for it, and you vote on what sounds like the best answer. This is that sort of game where you find out fast which of your friends is obsessed with crude humor and which are thinking way too hard. Unlike Joke Boat, you sort of want the Dictionarium answers to make sense, otherwise it becomes a waste of time and an exercise in futility. For example, if something is “POWRAX” and everyone’s definition is to the tune of “the noise someone makes on the toilet,” then we should have just spent the evening getting high and talking to each other instead of playing a video game. The added bonus is that there is a collection of words that you can revisit time after time, so the truly funny and good entries are immortalized. Still, if you don’t have people who are clever, this can turn flat fast.

Additionally, there’s Role Models, and this is one of those games that’s either going to be relationship building in the nerdiest frat ever, or it’ll tear high school friends apart in seconds. You get to all vote on different categories (Keanu Reeves Movies) and then take turns deciding who, in your group, fits into each of the different choices. So then if Vicki thinks she’s totally A Walk in the Clouds, you can all vote that and she can gush and you can all have a great time. But, if someone thinks she’s more like Sweet November, you can deal with the frigging fallout from that gaff.  Basically, it’s a game where you need to decide if you want to tell your friends what they want to hear or if you want to be the one to tell your friends what they ought to hear. There isn’t going to be a category that’s super edgy or offensive, but, given the nature of the game, someone’s gonna get too touchy about it. Yes, Frank, out of all the Hashtags, I think you’re #YOLO and not #BLESSED. Are we really going to fight about this? Then, when the game is done, you’re awarded a bunch of superlatives that seem to just come from a procedurally generated list, and then Jackbox gives you the option to physically order a t-shirt with those superlatives on them. Like, by paying money. For a t-shirt that just has words on it. I’m hard pressed to think when in my life I would have done this, but I was also already finishing college when Facebook launched, so maybe it’s just not for me, but damn it doesn’t make sense.

As you can see, this Jackbox Party Pack 6 is all about bringing people together, for better or worse, and it moves in the direction that gets away from just “wacky online gameplay” and actual interactions with people that could be fun or strange. Personally, I’m not a huge fan of those last two titles, but Trivia Murder Party 2 and Push the Button are so genuinely good as group games that I can still recommend it, and Joke Boat is hilarious in the right company. Just don’t take it personally if someone thinks you’re more of the winking emoji and not the kissing emoji: there were only so many choices, Jackie, I had to do it, and I don’t hate you.

Three strong games carry two averagely weak games, but that’s also coming from someone who’s here for laughs, not to build better connections with my friends.