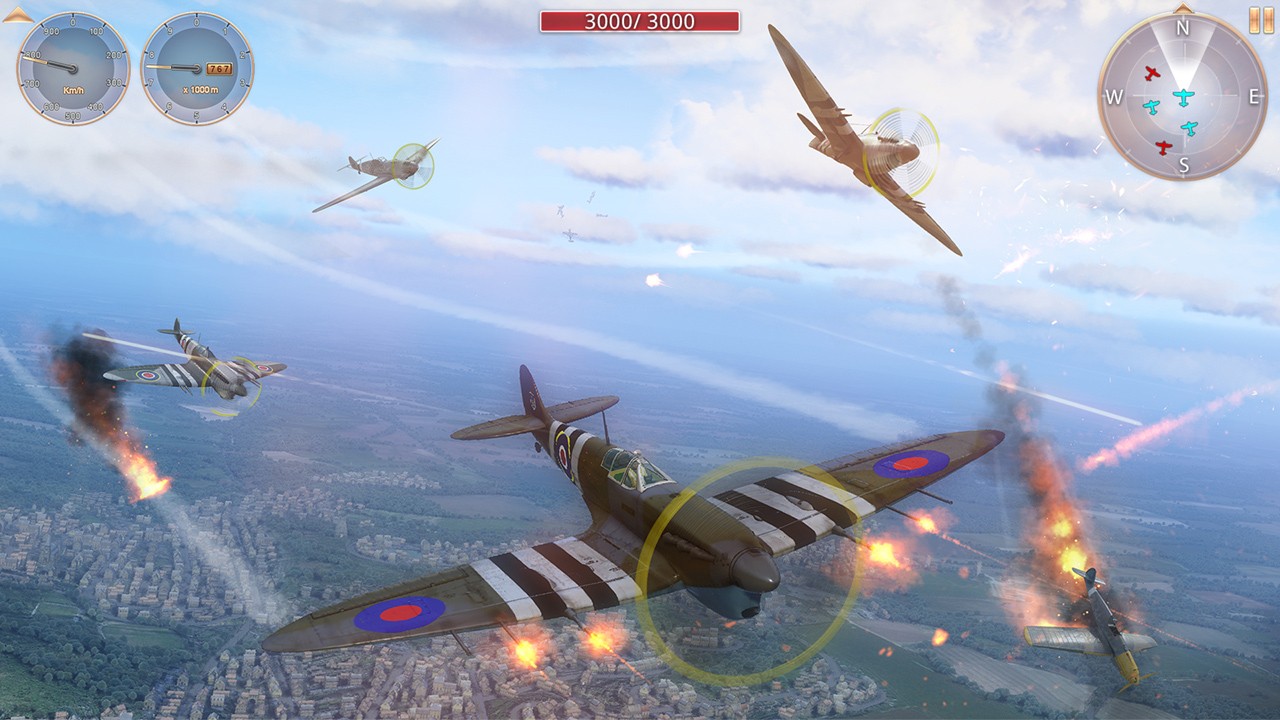 There have been many times during my years of gaming, that I have owned a particular console that never really catered for my thirst of flight simulations. Yes, I know that the PC platform is the place to go to get my air-time, but I’ve always enjoyed the adrenaline-fuelled, seat-of-your-pants style of aerial combat, rather than your myriad of buttons and levers just to get your craft to taxi forward. It all stems from my days of playing the Commodore Amiga 500 and is always a genre that I also visit; hence my disappointment when it is a genre that isn’t always covered. However, in the other hand, you can always have too much of a good thing, something that is increasingly happening on the Nintendo Switch with the expansive simulations of World War II aerial combat sims. Not that I’m ungrateful or anything, but a change would be nice. Saying that though, the latest of such games, Sky Gamblers: Storm Raiders 2 brings more of the same, but refines things slightly to add more to my tally of flying hours.

A sequel to Atypical Games’ previous title within the series, Sky Gamblers: Storm Raiders, this second iteration sticks within the tried-and-tested formula of scenarios, options, game modes and content, yet also builds slightly on it, bringing with it a refinement that sees a bit more detail and polish to the skies over the war-torn world of the Second World War. Instead of following a narrative or plotting a course in story telling, Storm Raiders 2 puts you within the cockpit of a series of world-famous scenarios and setting from the forties. Battles such as the attack on Pearl Harbor and The Battle of Britain are represented in fine fashion, with an epic scale that almost replicates what the sights and sounds of the time might have felt like.

Although it covers the same content matter as the first game, i.e. World War 2 aerial combat, each of the levels contains a bit more in terms of atmosphere. The level of detail on the ground almost looks like a photo-realistic reconnaissance of the true settings, but it’s the finer details that truly bring things to life. From the moment you take off from the runway at Pearl to the flying over the White Cliffs of Dover, you’ll be instantly greeted with an impressive array of anti-aircraft flak, a variety of weather conditions, radio chatter and a progressive detailing of damage that changes the look and feel of your chosen aircraft. It simply oozes with atmosphere and makes for a compelling series of sorties to undertake. 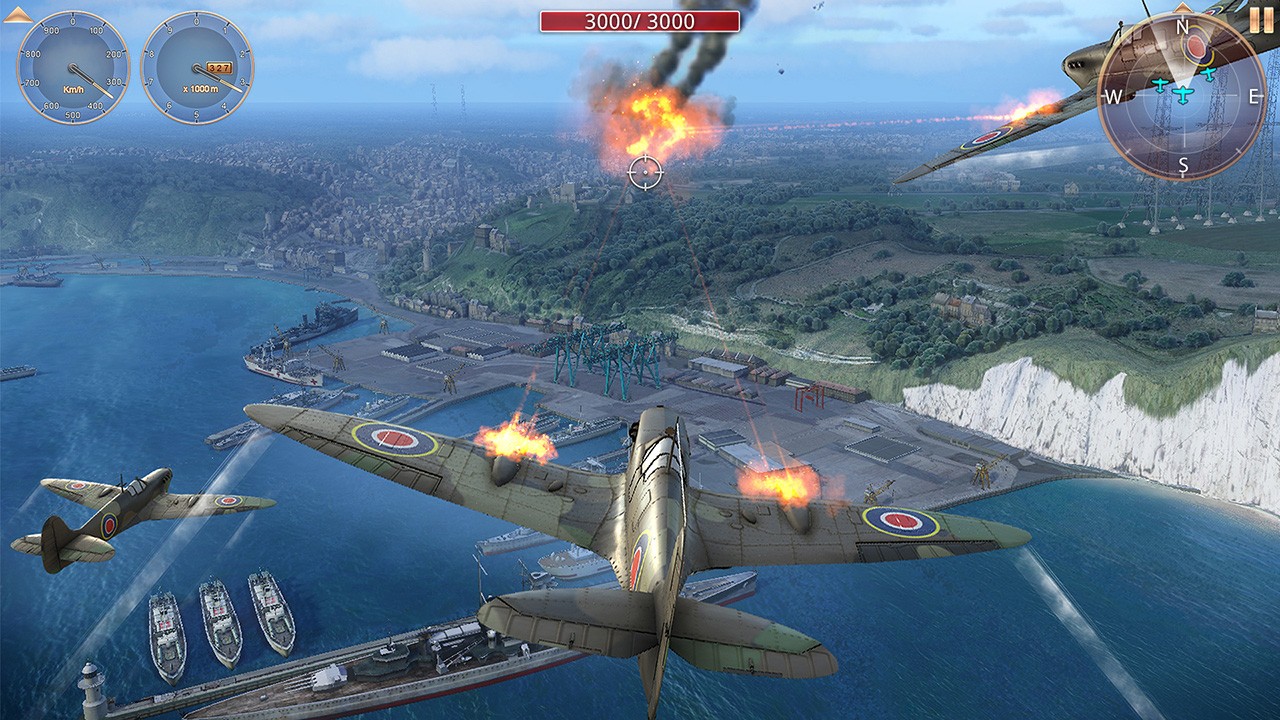 As with the majority of Atypical Games’ series of war games, there are also a variety of camera views from the external chase plane view to sitting inside the cockpit. The game also looks more refined here, especially as you look around the confines of your cockpit, portraying an effective feeling of being cramped within the growling machinery of your flying war machine. Control-wise too, there are a myriad of options that will allow you to find your specific style from arcade handling to a more realistic approach that borders the realms of true simulation; bar the pressing of buttons and pulling of levers. In fact, I have to admit to the controls feeling a bit loose when I first took control of the flight-stick, but with some tinkering within the options menus, soon found a setting that felt very comfortable indeed and soon saw me diving through the flak to take out a series of U-boats with relative ease.

The visuals are quite impressive, whether it be aircraft models or the scenery around you and it is also perfectly matched with a fantastic audio quality too. The constant radio chatter or buzz of the passing enemy plane further add to the atmospherics. Saying that though, I did feel that the weapons felt and sounded a bit weak; breaking the immersion of everything else that is going on around you. Despite this though, the settings of the scenarios are very well done here, producing some exciting moments as you re-live key battles from the history of the time. Again though, saying that, I have also played some similar games that portray the same battles in a far more effective and realistic way, but then again, I’ve also played others that are far worse than what is on offer here. 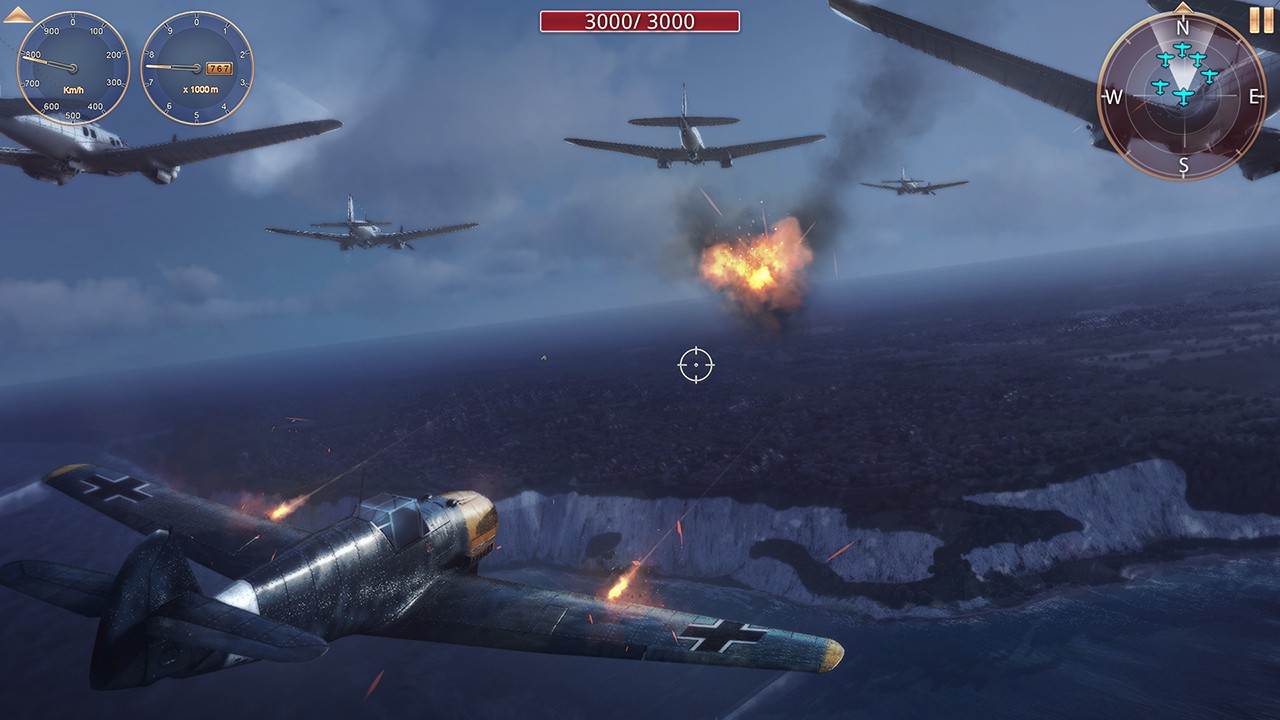 As well as the campaign, or series of sorties from famous historical battles, there’s also a wealth of other options to tinker around with. From the full customisation of some of the most iconic aircraft of the era to campaign-progression unlocks and a number of game modes that can be played solo or against other pilots online. There are a wealth of customisation options to give your aircraft a personalised paint job and look; especially handy if you’re looking to play online. There are also a number of options here too, with a series of game modes from Team Deathmatches to Capture the Flags and King’s of the Hills. As has been the case when reviewing a number of games of this style, no lobbies were ever available for me to play through; something which still plagues other releases of this genre on the Switch. However, you can play any of these modes as a solo pilot against an army of bots which, although not the same as human counterparts, do provide an air of longevity and a good casual way of passing the time.

In terms of content, there’s plenty here to do, from running through the campaign missions to the casual game of dogfights, plus the added incentives of unlocking new plane models and liveries, levelling up your pilot and trying out more advanced controls or gaining respect on the leaderboards. It gives the game a good life-span and makes it a worthy purchase if you’re looking for a flight combat sim that has legs, as well as wings. Whether you’re looking for a casual experience or a more prolonged spell of air-time, this game will have you well-covered; especially with its bite-sized, but epic, depictions of World War 2 aerial combat within some of the most iconic and prolific battles of the era.

Overall, Sky Gamblers: Storm Raiders 2 offers an exciting take on aerial combat. It follows from its predecessor with more refinement that adds sharper detail and a more atmospheric premise. Each of its scenarios and battles are nicely presented and run along a mechanic that feels epic, but never too overwhelming. Whether you’re an arcade junkie or a stifler for simulation, you’ll find enough within its options to cater for any type of pilot. Its number of game modes, styles and options ensures that there’s always plenty to do or some way to play. If you’re a fan of the original game, then its extra refinement will be a welcome addition, but with an impressive level of detail and playability, this is a flight sim that will appeal to any budding virtual pilot.

Sky Gamblers: Storm Raiders 2 builds on its predecessor with more detail and refinement to produce another compelling combat flight simulator.