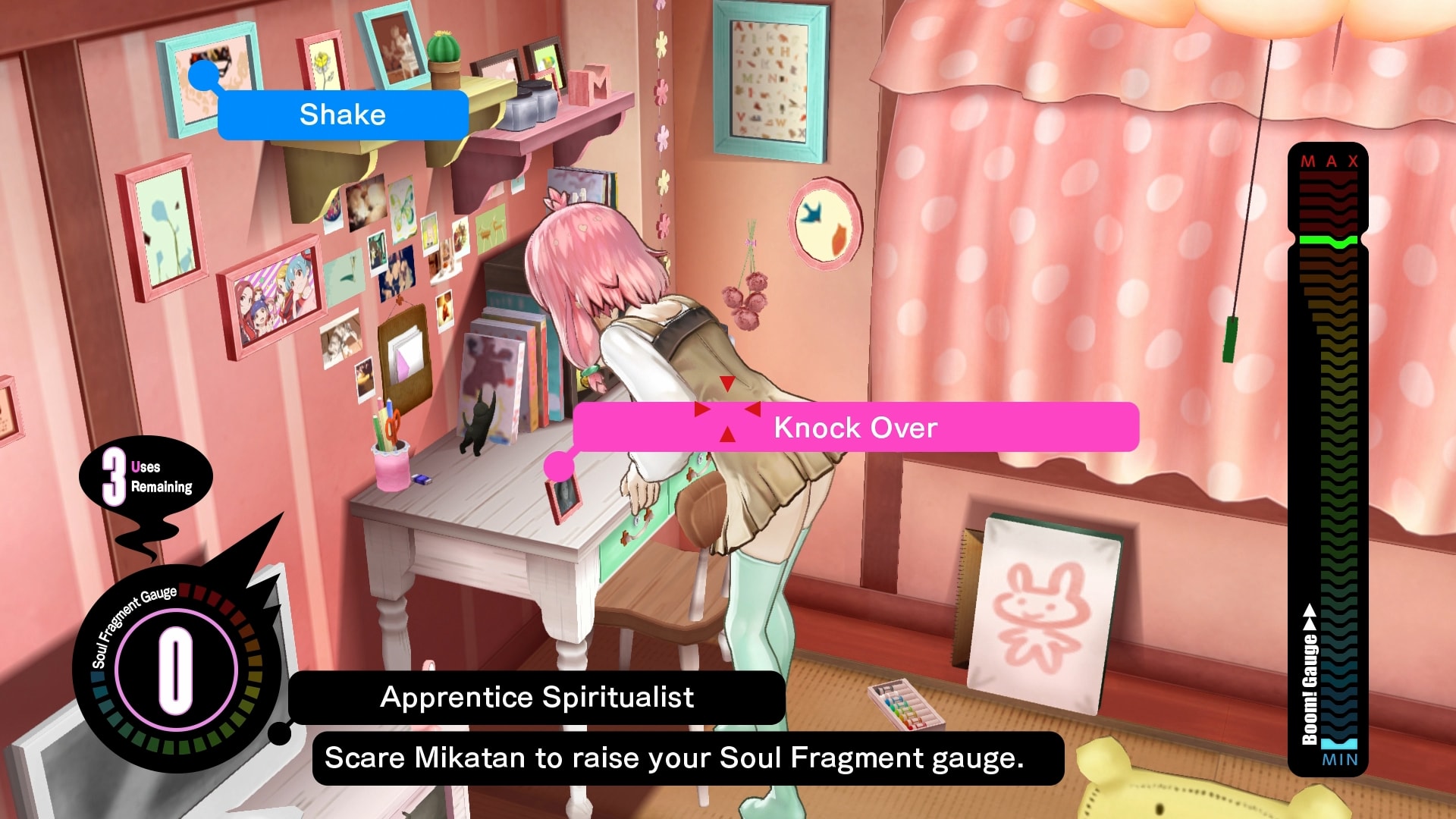 Punch Line is a visual novel adventure game developed by 5pb and published by PQube. It’s written by the creator of the Zero Escape series, and developed by the company who created the Science Adventure games (Steins;Gate, Steins;Gate 0, Chaos;Head, Chaos;Child, and Robotics;Notes). It’s a really quirky game, and I honestly wasn’t sure what to expect when I started up the game for the first time. What I saw pleasantly surprised me though, Punch Line is a deceptively clever game that mixes some unorthodox elements together in a unique way.

The game tells the story of Yuta Iridatsu, a young man who gets caught up in a bus hijacking and after a freak accident finds himself as a ghost or “astral body” since he’s not actually dead. The next thing Yuta knows, he’s waking up back at the dorm that he’s been loving at. He soon meets a cat spirit called Chiranosuke, who wants to help him get his body back. Yuta’s body has mysteriously been taken over by someone else, and Chiranosuke informs him that he needs to get his hands on a special book called the Nandara Gandara. It supposedly contains a special ritual that will allow him to reclaim his body. It’s located somewhere within the dorm, but it’s going to be hard to get since Yuta’s body simply passes through walls and objects. In order to get it, he needs to use his new spirit powers to influence objects in the environment, in order to try and get the other dorm members to do what he wants them to. He can only do minor things like knocking small objects over though, so this is going to be difficult…Especially since Yuta is a bit of a pervert. If he sees a woman’s underwear, he gets extremely excited and if he sees too much in a short period, he gets a comical nosebleed. And then a large asteroid collides with Earth and humanity is wiped out, not so comically. Good thing that Yuta now has the ability to rewind time. Being a spirit has its perks. The game’s mystery revolves around Yuta figuring out how to get his hands on the book, as well as why his level of excitement is related to a human extinction event. 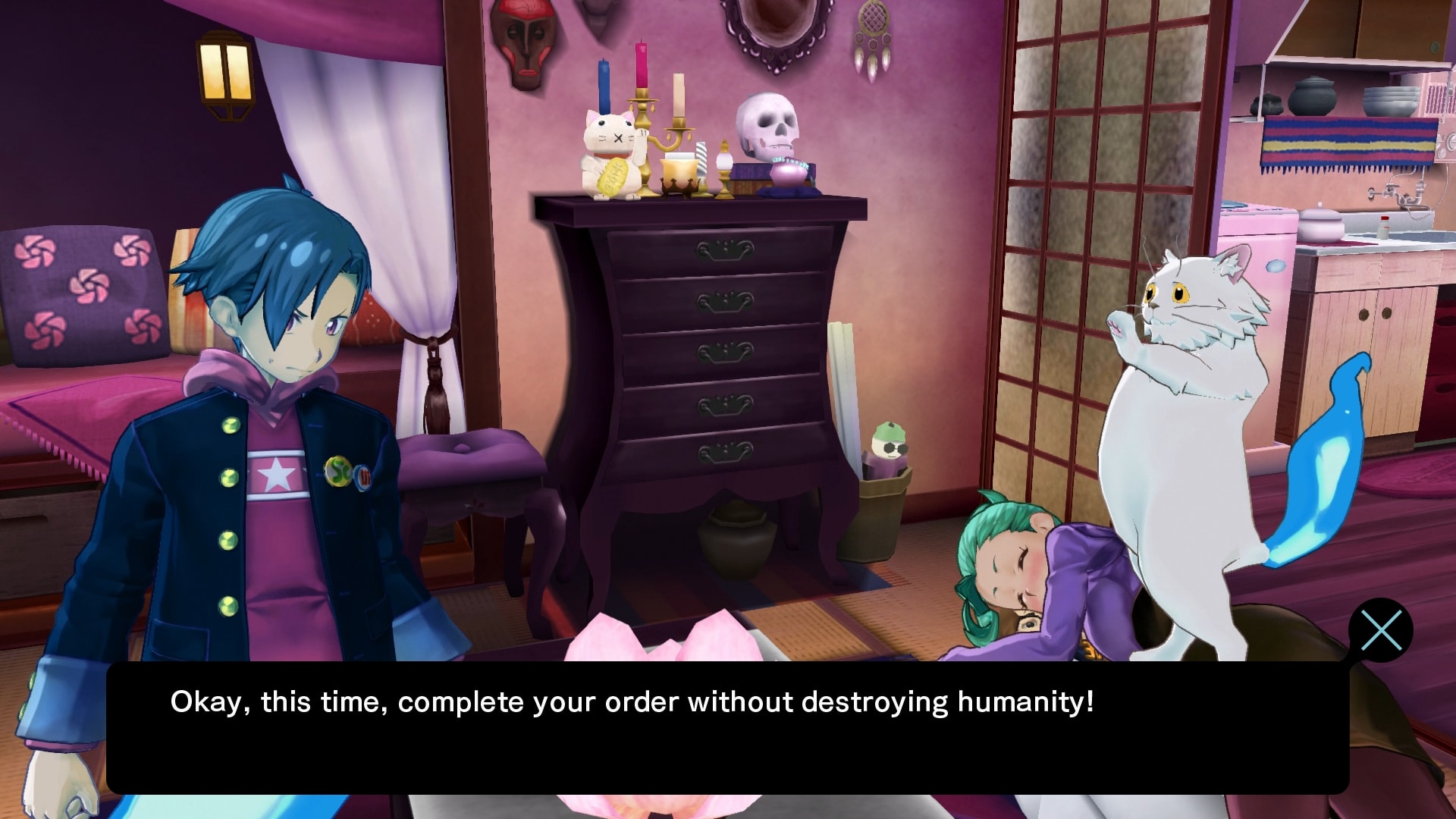 Punch Line’s gameplay is divided into two parts. The main part is the visual novel part, where you read through lots of text as the detailed story progresses. The other part is the adventure part, where you have to do some light puzzle solving as you move between rooms inside the dorm building. Yuta starts out by only being able to influence small objects at first, but as he gathers spirit points by lightly scaring the female members of the dorm, he gains the ability to affect larger and larger things. Scaring people requires Yuta to create a chain of events, which is where the puzzle solving comes in. You need to interact with the right objects in each room in order to get the result you want, and you only have a limited number of moves that you can make before you run out, Yuta gets excited, and the world ends. If you run out of moves, you’ll need to restart the puzzle from the start. Each puzzle is fairly short though, with even late game ones requiring only a handful of moves to solve. The puzzles are clearly present more for the player’s amusement rather than as a real challenge, and it actually suits the game’s tone quite well.

Punch Line features 22 chapters, each of which mimics the format of the anime. They all begin and end with an animated video. The game features multiple clips from the anime to help tell the story. Each episode has a couple of chapters in it. There’s also an anime clip that was created just for the game though, which is a nice touch. It serves as a kind of epilogue or true end for both the game and anime. Each chapter lasts for around an hour, with the full game having a length of roughly 20 hours.

Punch Line is a very Japanese game, you really can’t imagine it being produced anywhere else. The story is simply bizarre, with a talking cat spirit, super heroes, underwear, and the extinction of humanity all being mixed together. This isn’t a bad thing. It all makes for an interesting mystery, and it’s often hard to guess what’s going to happen next. This is Punch Line’s biggest strength, and the fact that the game also features a colourful cast of well written characters is a major bonus. There’s Meika, the genius inventor, Ito, the anti-social shut in with a pet bear cub, Rabura, the mature psychic, and Mikatan, the bright and bubbly school girl who has a hidden secret. 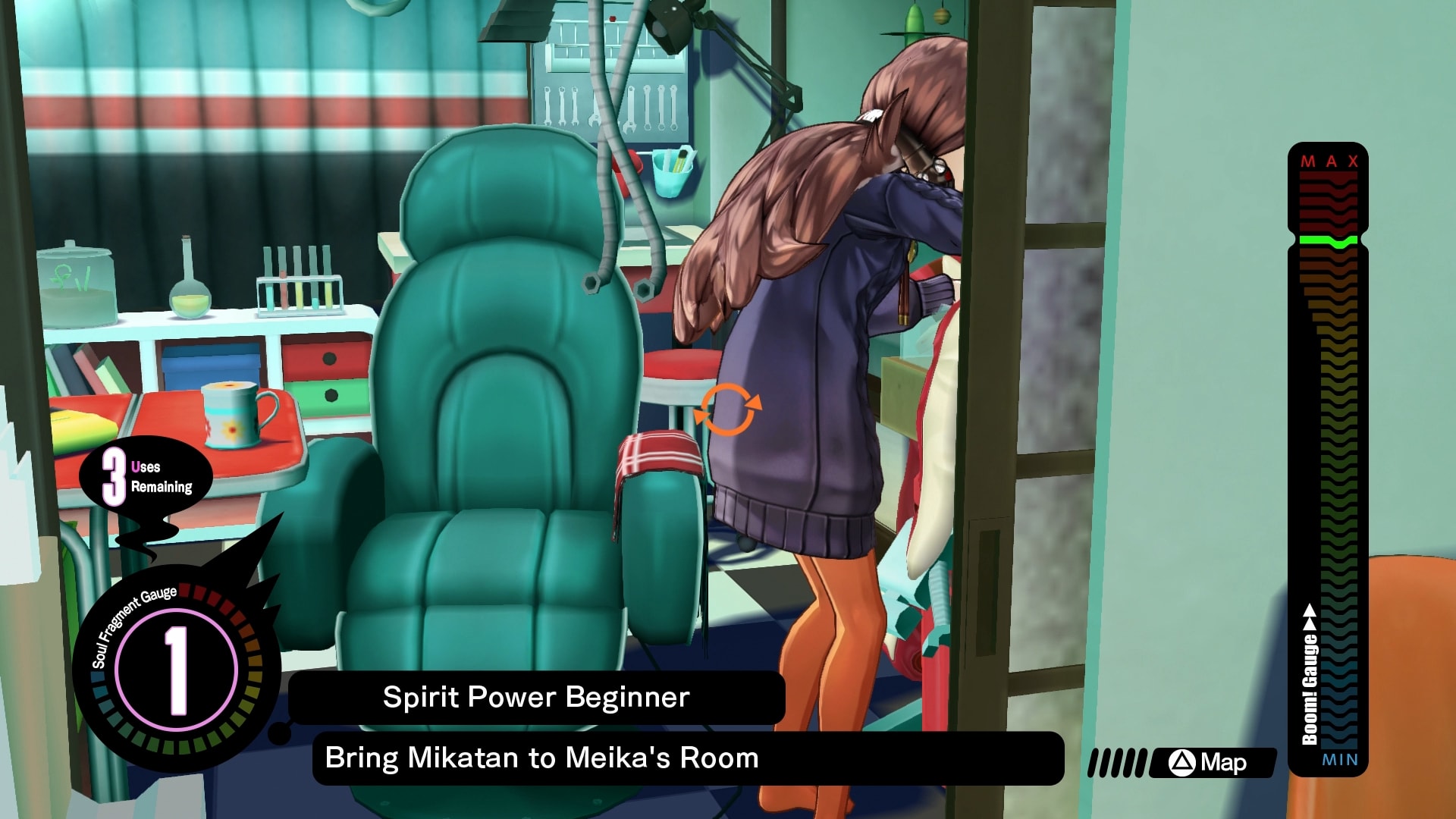 Visually, Punch Line is a bit of a mixed bag. The 2D artwork and anime scenes look great, and are vibrant and full of colour. The 3D graphics and character models, on the other hand, are just passable. They do a decent job of capturing the look of the anime, but are a bit low resolution and low detail. You can tell that this is a game that was designed to run on both the PS4 and much less powerful PlayStation Vita. The audio is high quality, featuring a mix of tunes that complement each scene well, from the light hearted to the serious. The voice acting is top notch, and features the same cast from the anime.

Overall, Punch Line is a fun adventure visual novel that manages to stand out from the rest. The puzzle gameplay segments are simple but entertaining, and tie into the novel’s story well. The story is a very faithful adaptation of the one seen in the anime, and also manages to expand on it in places. The game is definitely recommended for fans of the anime, you can’t go wrong. Most fans of visual novels should also enjoy Punch Line, but you do need to be able to embrace the silliness, so it’s not for everyone. The game has been out for quite some time by this point, so the price is coming down. It’s worth picking up on sale if you’re looking for a visual novel that stands out from the crowd, with great writing and a fun concept.

Punch Line is a fun adventure visual novel that manages to stand out from the rest.