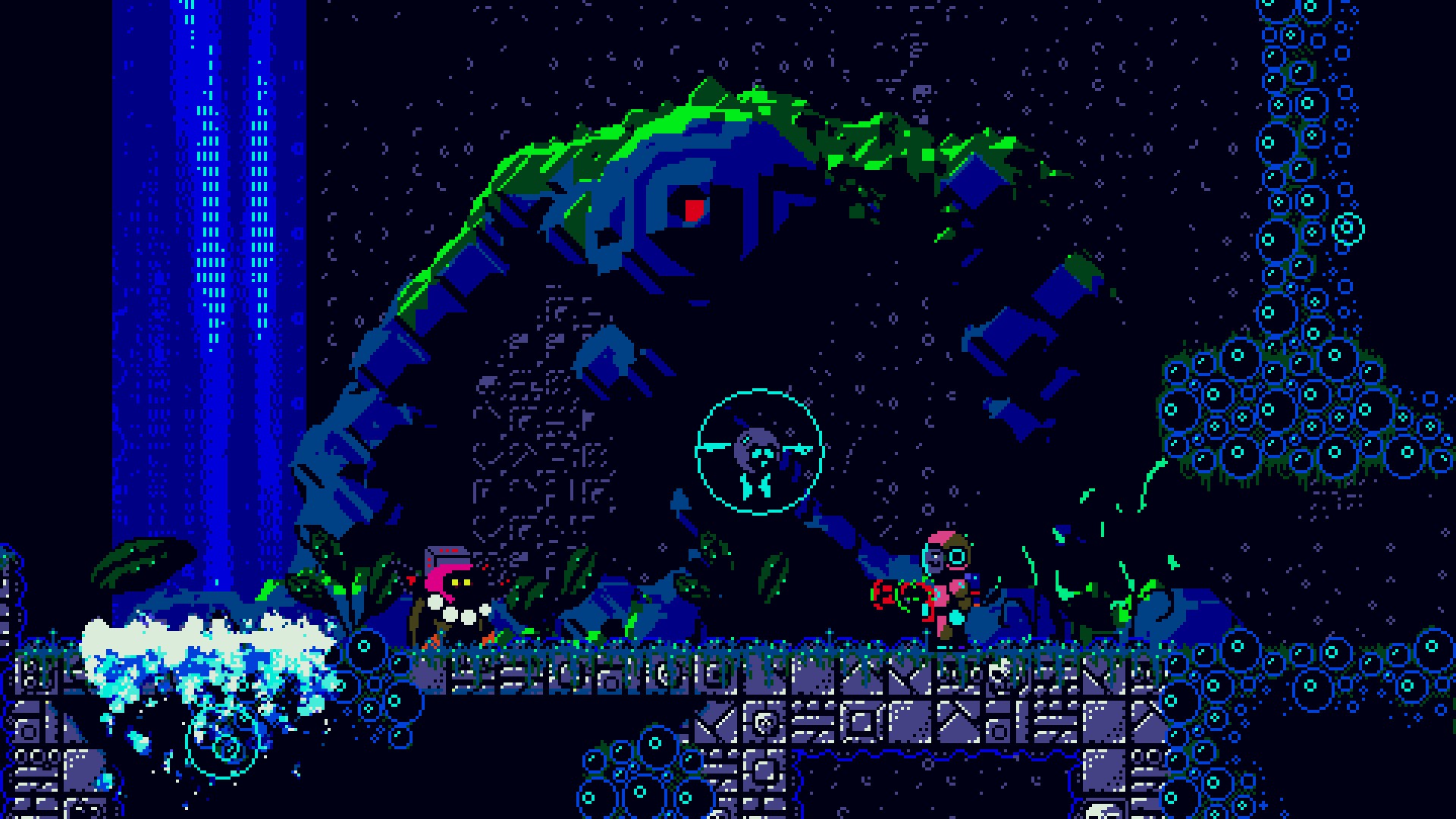 OUTBUDDIES is the result of 6-year long journey for Julain Laufer, a developer that set out on a challenge to make a game as akin to Super Metroid as one could make. With that said, six years is a lot of time for someone to pour into a single project, but as we’ve seen multiple times with certain indie titles, sometimes, the wait, patience, and effort is worth it.

In OUTBUDDIES you play as Nicolay Bernstein, an archeologist that’s obsessed by an enigmatic civilization that supposedly vanished from existence just before Humanity came into play in the grand scheme of things. In pursuit of his curiosity, you find yourself in an underwater city inhabited by a race of miners called the Wozan. Unsure of what’s happening around you, you venture forth into the unknown, eager to find out more, but thankfully you’re not alone, you have your fellow droid Buddy, which will play a critical role in your journey.

Right when you get into OUTBUDDIES, there are a few things that become immediately apparent. The first one is that even though the game presents some kind of narrative, either through environmental cues or through some of the few NPCs that you find, either purposely or unintentionally, everything remains a mystery, even after I’ve finished the game. Things are not particularly clear, and that’s probably for the best, as it leaves some room for the player to contemplate the world surrounding it.

Another thing that is noticeable right from the very first moment when you start moving around is that OUTBUDDIES features extremely tight controls. Despite being described as a run and gun Metroidvania, there is a surprising amount of thought put into several different areas that are unravelled as you progress through the game, which turns what initially appeared to be a straight-up 2D side-scrolling shooter to something much more. 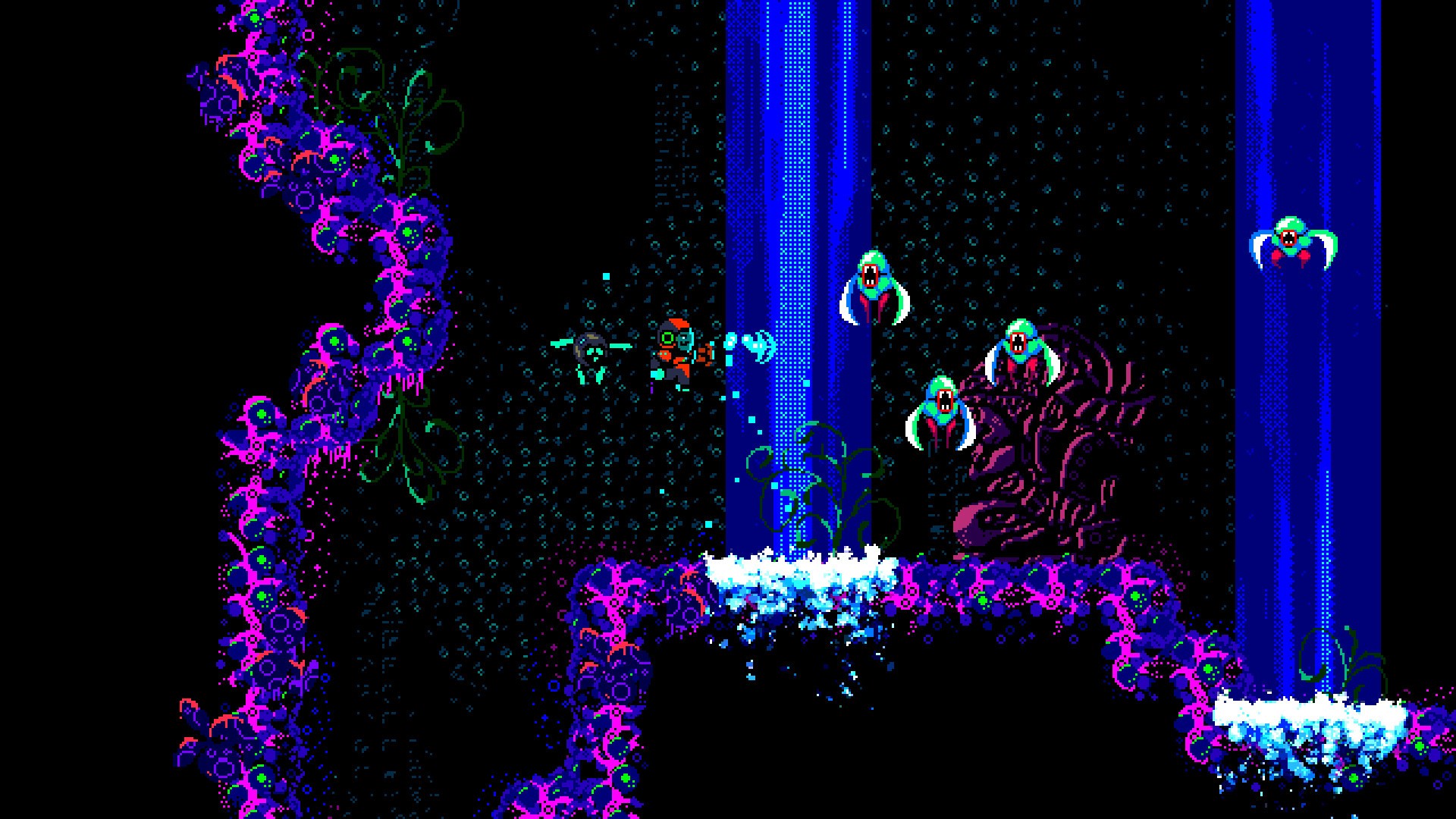 The game features a gear progression system, which has a total of 4 weapon and 5 suit upgrades. However, for the most part, these upgrades are not optional, as they’re required in certain circumstances. This not only applies in terms of dealing with enemies but also in solving puzzles. I’m using the word “puzzles” here, but they might not be what a lot of people consider a puzzle to be. It’s more of like, using a certain combination of your gadgets to traverse the levels, either by exploiting the level design or enemy allocation.

The underwater world of OUTBUDDIES is brimming with all sorts of distinct biomes, enemies, and environmental hazards that are sure to keep you on your toes at all times. As you progress through the game and unlock new gadgets and upgrade Buddy, you’ll see yourself having to get your brain working to make use of the environment to get rid of enemies or use them to get from point A to point B. It is when everything clicks together that the brilliance behind OUTBUDDIES shines.

I love how creative you can get by combining this weapon that shoots out bubbles that turns enemies into platforms that you can jump on, with the double jump or your jetpack to reach higher places. Also, I have to admit that I may have been cheesed quite a few enemies by simply immobilizing them with bubbles and attacking them until they dropped dead. Nonetheless, it’s all in good fun. 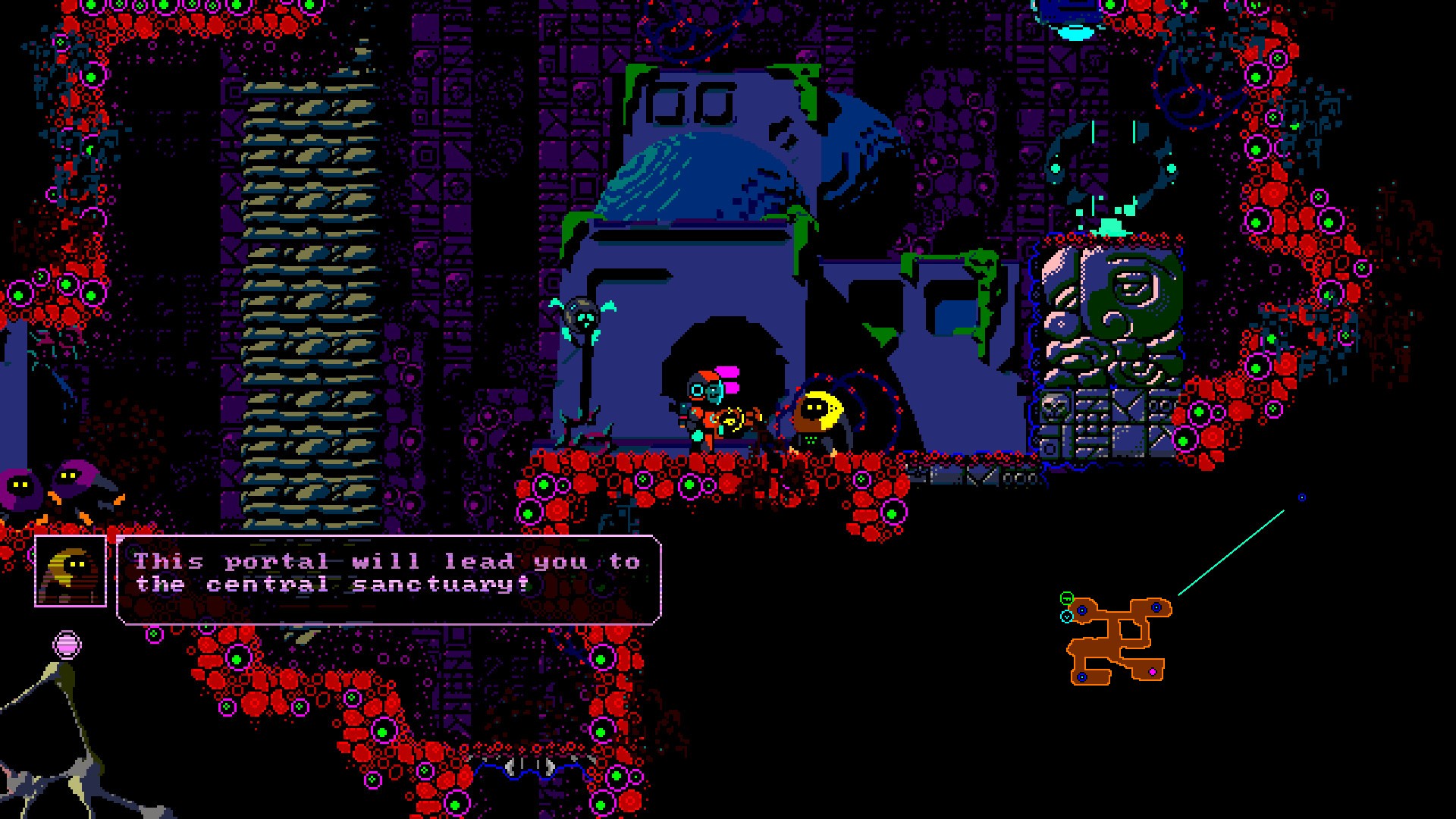 Unfortunately, while OUTBUDDIES is quite an enjoyable game, it also feels like I could’ve used some extra time in the oven. For starters, Buddy’s telekinesis and hacking abilities use this sort of radial wheel selection mechanism which, while it is pretty functional when you’re stationary, during a fight it can be particularly frustrating. Likewise, wall jumping also feels pretty finicky, and the tutorial panels that you see at the beginning of the game are not intuitive. Despite everything, I think the most egregious problem that I encountered was when I went into an area before I was supposed to go there. This led up to me getting stuck there, unable to progress and unable to go back. My only option was to quit the game, thus losing my entire progress in this zone, and find the correct way through which I was supposed to go.

Nonetheless, the most glaring issue for me is the map. This is way too zoomed in, there’s no option to zoom out, which is particularly debilitating given how big the map in OUTBUDDIES is. Also, fast-travel points only allow you to travel to a specific location, and they’re not labeled, so you might find yourself wondering which leads where. On top of that, the controls for panning around the map are inverted, for some reason.

It took me a little less than 14 hours to beat the game, and while I did struggle quite a lot for the first couple of hours, while I was still trying to make sense of the way that Buddy’s abilities worked and while I attempted to “unstuck” myself from that little incident where I ended up getting soft-locked, I can now say that I’m glad that I managed to pull through the initial struggle, just so that I could actually experience the gem that OUTBUDDIES is. Given how tight everything feels, the surprisingly captivating boss fights, all I can say is that the game as a whole is quite compelling, but I still can’t shake the feeling that some people might try it out and decide it’s not for them before reaching that point where the game reveals itself.

OUTBUDDIES, as a whole, is quite compelling, but some people might try it out and decide it’s not for them before reaching that point where the game truly reveals itself.