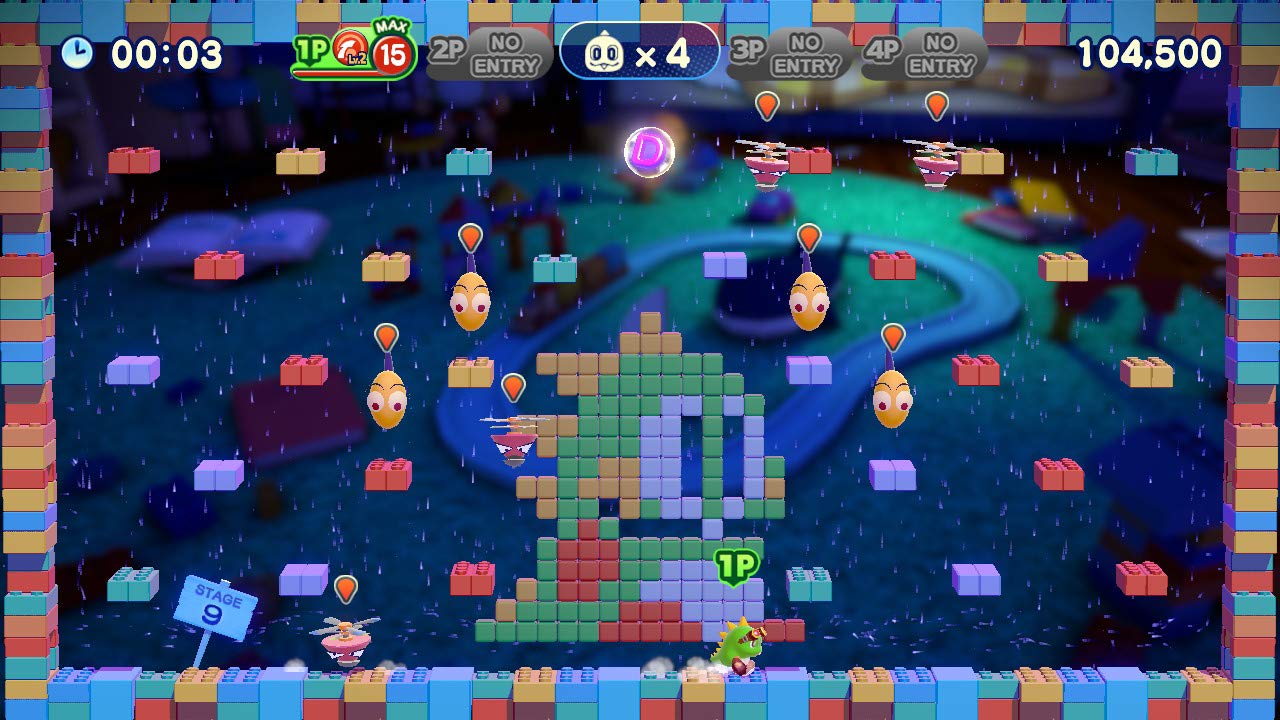 The original Bubble Bobble, shunned from the Switches Classics Catalogue, (despite holding the torch as potentially the best Co-Op puzzle game of the eighties), has finally made its way to Ninty’s hybrid console. Unfortunately, the ’86 classic is tied to a full price, bitterly average sequel, and while it’s not the first time Taito have brought their second most famous IP back from the dead, it’s one of the least impressive jaunts for the bubble blowing dinosaurs in recent memory.

But as far as modern incarnations go, 4 Friends greets you like a warm, nostalgic hug, the ever charming Bub and Bob enter the modern era with the same bubble blowing and fruit collecting gimmick you remember, working their way across 50 primary-coloured levels full of traps, giant watermelons and monsters.

It’s still a simple but effective formula – capture enemies in bubbles and then quickly make your way across the map to pop them before they escape. Once all enemies are clear, you and up to three friends can quickly perform a mad dash to collect a screenful of fruit-loot before being whisked off to the next level.

The level design stays true to Bubble Bobble history, with a very loose story linking the game together as you travel around a child’s bedroom on a whimsical journey through semi-themed worlds. Early levels usually aren’t complex – basic jumping, bubbling and popping, but as the game progresses, level design gets more interesting, and that’s really when the game comes into its own. 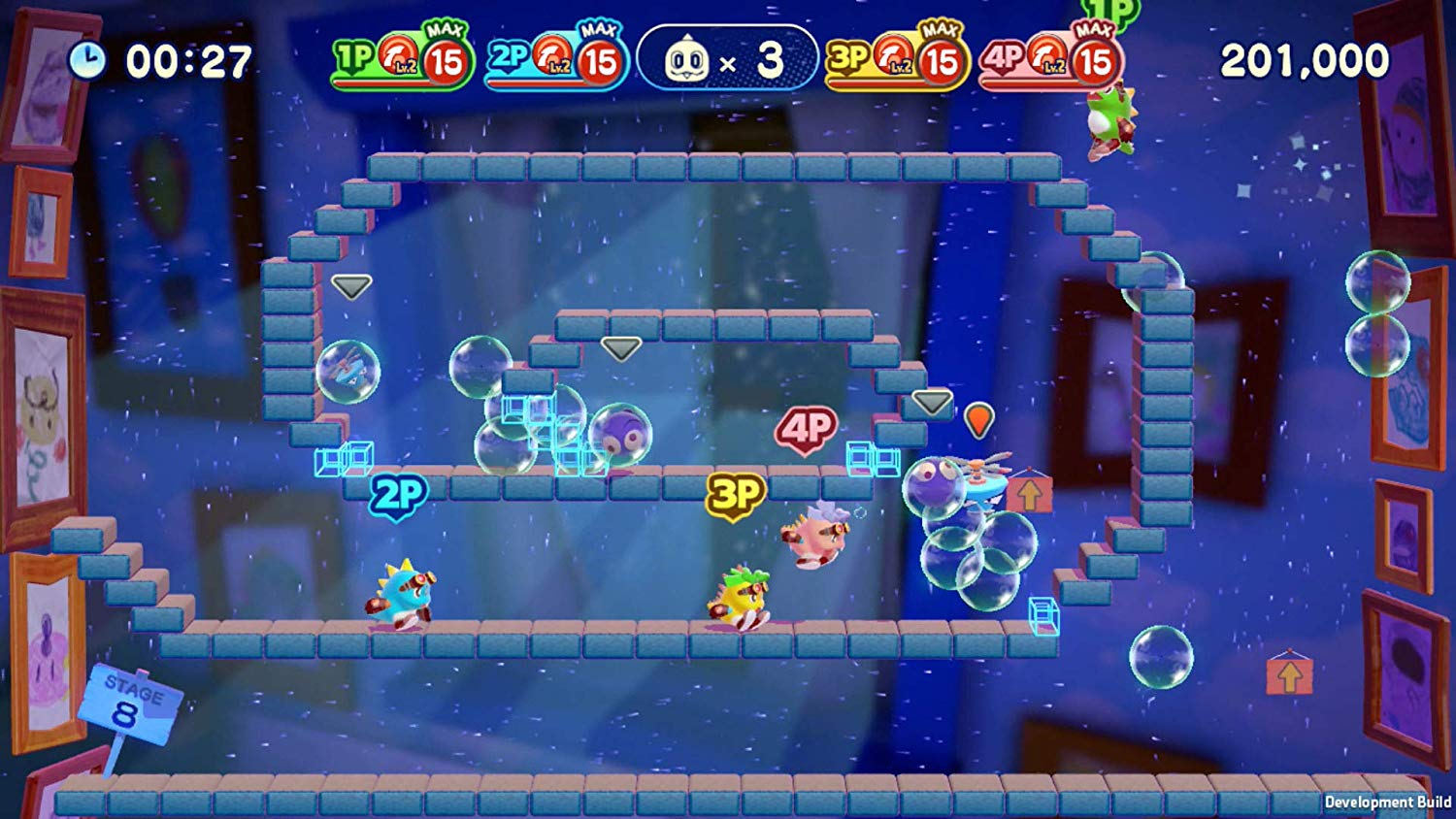 Some of the best parts of 4 Friends occur when level design shifts to using bubbles to form strategies to make your way across the maps, often using them to float over traps or manipulating them to carry you through wind tunnels. These parts of the game however are few and far between, and they’re often sandwiched between more classic bubble popping. That’s not something I’m complaining about, but I had a lot of fun with 4 Friends’ more puzzle focused levels, and it’s a shame that, more often than not, I can complete a level by hammering away with my bubbles. There’s five boss battles too, and while it’s clear that they’ve tried to add a modicum of strategy to these, they tend to boil down to again, seeing how quickly you can cover the boss in bubbles.

When you’re done collecting fruit, your team of adventurous dinosaurs can unlock new power ups to aid their quest, like quick moving boots and splash damage causing bomb bubbles. The five power ups are unlocked after defeating each world’s boss, and while there’s limited options, they’re each fun to try and useful if you find yourself struggling. You can also improve the quality of each power up by collecting the ‘Extend’ icons floating through certain levels, which will allow you to use each power up more times during a round.

Across the five worlds, each split into ten levels, the monsters and traps you meet vary somewhat but each share a similar theme, and it’s disappointing that the variation seen in the original title and even in earlier sequels isn’t demonstrated in 4 Friends. Most bad guys display some form of hovering, moving back and forwards or shooting in a single direction, and it’s this that creates 4 Friends biggest problem – it’s too easy.

Even at its most difficult, each level, at its longest is around a minute long. Between me and my partner we completed the main storyline in under an hour, only missing one full ‘Extend’ which we went back through a second time to collect. Completing the main campaign unlocks a hard mode which we’ve yet to go through completely where the challenge is definitely amped up, but again, each level only takes 60 or so seconds to complete so it won’t take long to go through a second time around. 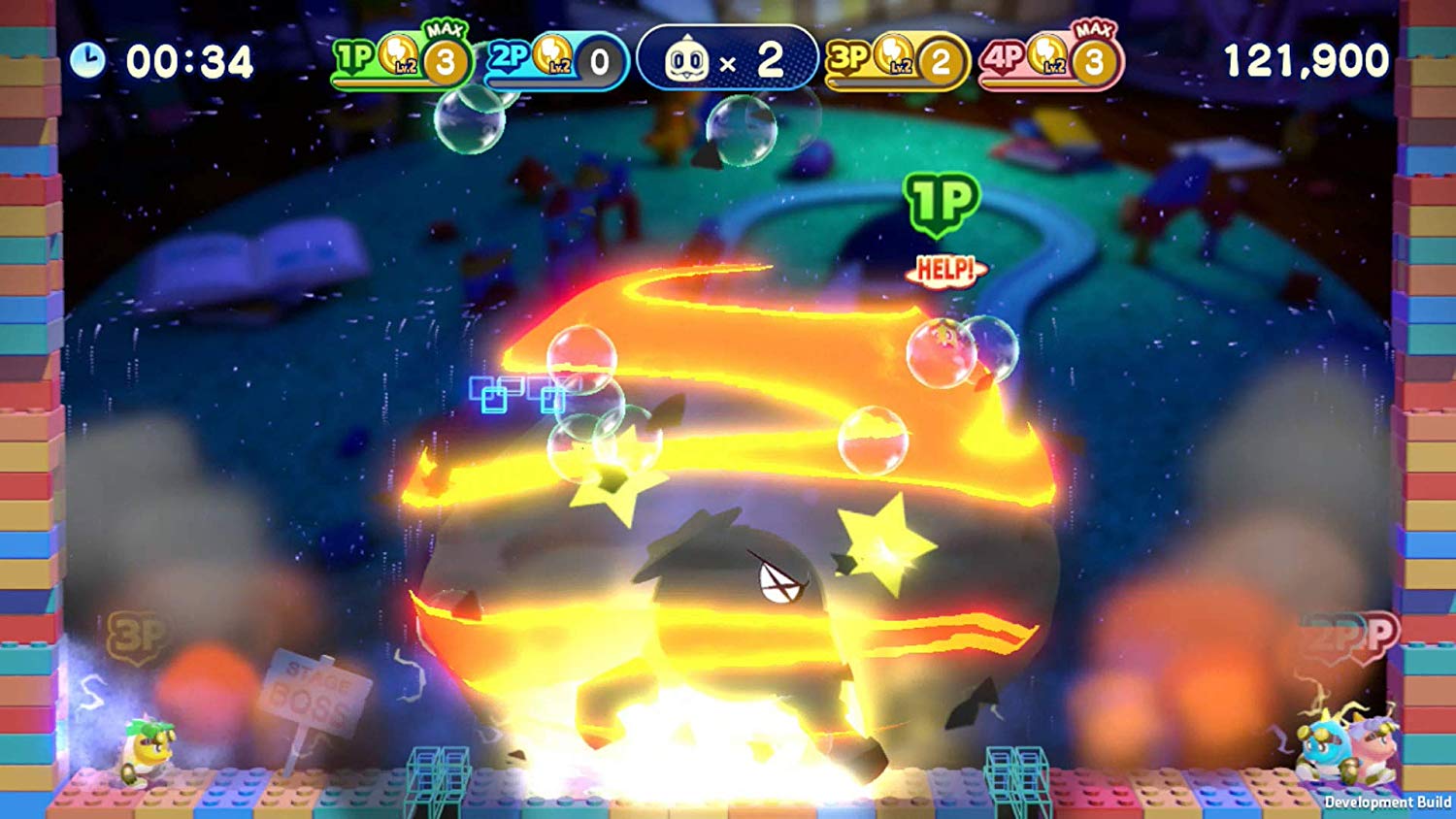 And while 4 Friends can be taken very literally – after all, you can play with up to four of them, the game doesn’t support online play or any competitive modes. Playing with a full group however is still fun, and it plays perfectly fine, even if it’s a little chaotic at times – four characters all going after the same monsters can be confusing on small and cramped maps, but it’s still a great laugh with friends.

But if you count hard mode, 4 Friends has the same amount of levels as the original title, so why doesn’t this feel as grandiose as the former? Well out of the ten hours I’ve put into 4 Friends, I’ve spent seven of those locked in the Arcade mode, spending my hours playing the original title. The original still feels a more complex and complete game, with more exciting power up bubbles and elaborate enemies and map designs. 4 Friends, despite being over 30 years senior, somehow lacks the complexities and depths of some of the level design that Bubble Bobble was known for, and the more you play, the more it shows.

Alas, 4 Friends is still a wholesome title, and it has plenty to keep Bubble Bobble fans happy and coming back for more. There’s three stars available for each level, so you can replay again and again to get a better score, as well as songs to unlock for completionists. It’s nice to see Taito throw plenty of callbacks to their other titles in the level designs, such as giant Space Invaders taking over stages. Outside of the cutscenes which look a little sketchy, it looks great – perfectly bright, 2D backgrounds with our heroes and enemies brought to life in 3D at the front. But while it looks great, it’s a shame we couldn’t have seen better enemy design brought to life on the Switch – it feels modern day tech has been underused.

Bubble Bobble is, and always will be, a classic, and while Bubble Bobble 4 Friends doesn’t tarnish the series’ legacy, it doesn’t do anything to move the series forward. That being said, it’s good to see the boys back in action, and while it’s over far too soon, I’ll still dig it back out now and again for a rumble on the original, and maybe even a round or two on the 4 Friends on sequel too.

Bubble Bobble is, and always will be, a classic, and while Bubble Bobble 4 Friends doesn’t tarnish the series’ legacy, it doesn’t do anything to move the series forward.