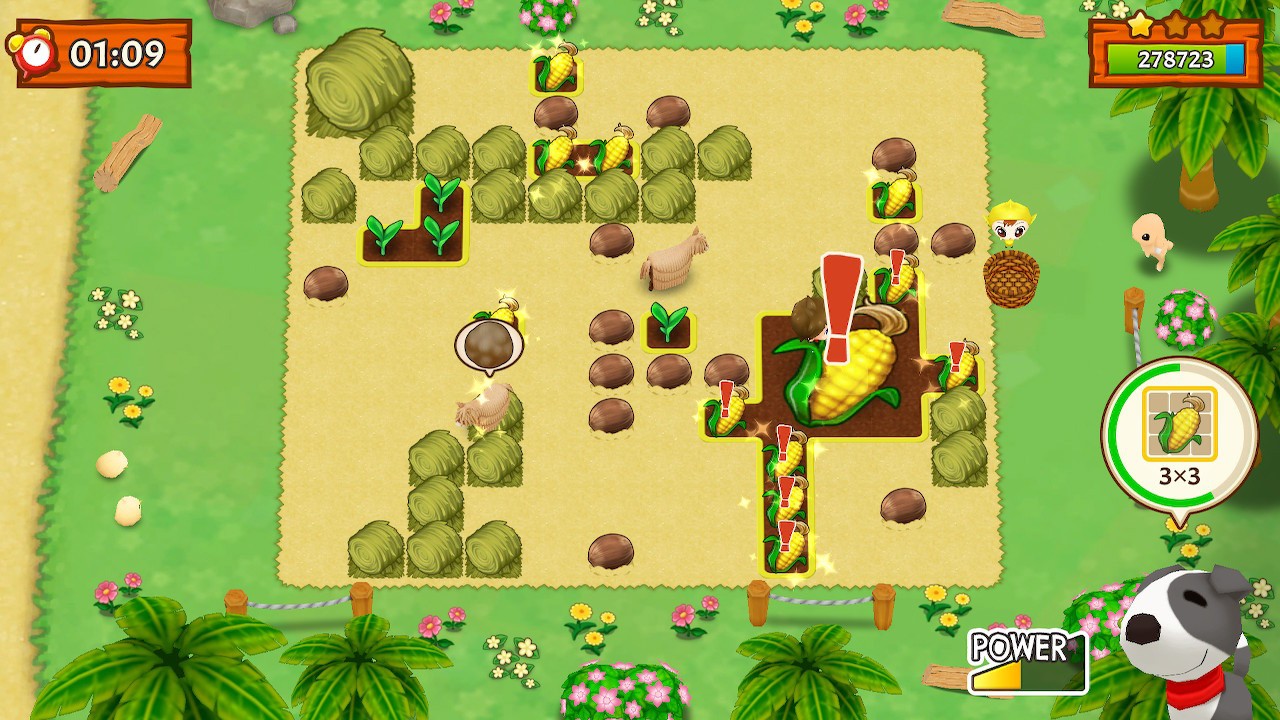 What’s the first thing that springs to mind when the name Harvest Moon is mentioned? Well, for gamers it will immediately conjure up images of a farm-based role playing game that runs at a soothing pace. Its early iterations were hugely successful, spawning a solid fan-base that still reminisce with rose-tinted glasses; despite the fact that later versions of the game became less received with each newer title. Well, to stop the crops from rotting even further, Natsume and Rising Star Games have taken a different approach to their overgrown formula, this time bringing a puzzle-style of adventure that boasts some frenetic gameplay in their fast-growing crop of Harvest Moon: Mad Dash as it fields a release onto the Nintendo Switch.

If you’re a veteran of the Harvest Moon series, then make sure you research this new iteration of the franchise, as it may not harvest the fruits that you may immediately expect. At its heart, this is still very much a game that centres around farming, but runs along a mechanic that sees you solving a series of puzzles that wouldn’t look out of place on mobile platforms. There is a story here to give a reasoning to advancing through the levels, but it never really takes centre stage or presents itself in a series of cut-scenes. The main element of its gameplay comes in the form of a series of puzzles that sees you harvesting crops, milking milk, fishing fish and bailing hay in your quest to gain stars and unlock the path to progression.

Although it isn’t the main focus of the game, a story does revolve around working towards collecting a series of magical ‘time seeds’ that are needed to restore balance to the island on which you reside. The disappearance of the aforementioned seeds have forced the once tranquil settings of the island to become overgrown by a jungle. In order to restore its beauty, you must work through a series of levels across a variety of locations from the farmland, the beach, the skyworld and the underworld. Each level grants you a series of up to three stars and these stars are used to open up new areas within the location and towards your ultimate goal of obtaining the missing seeds. 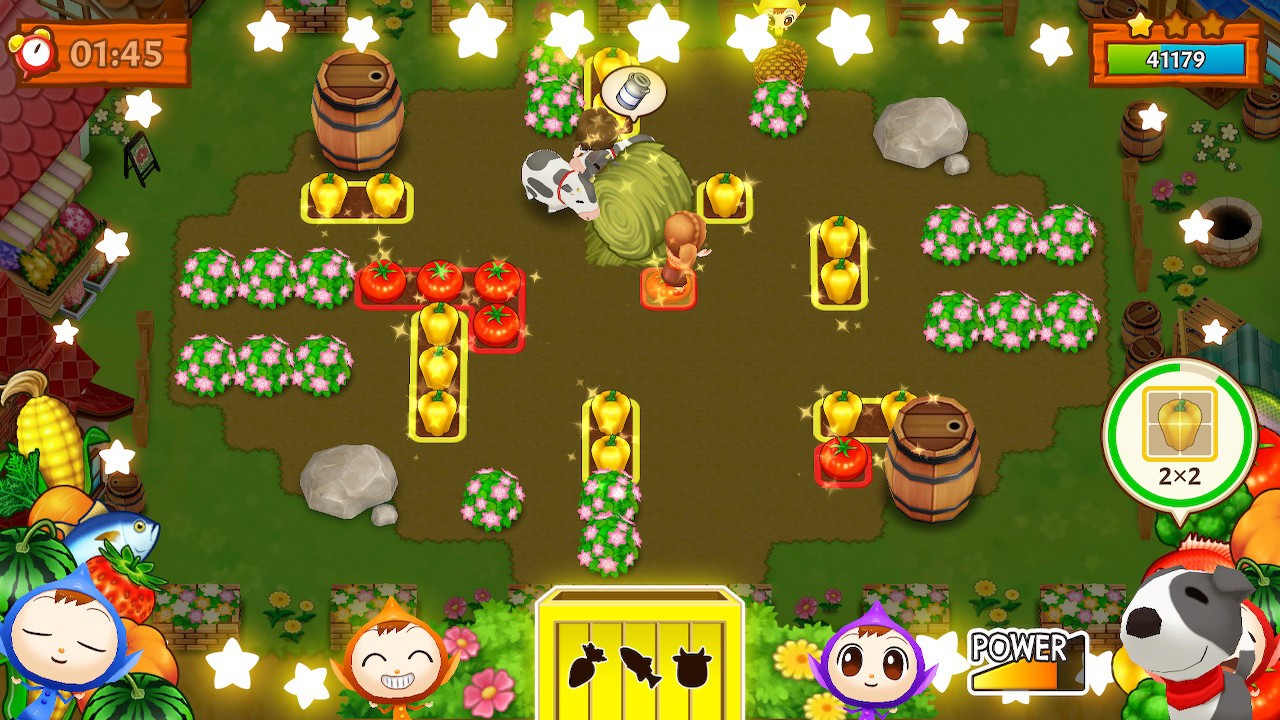 It is here where the central core of the gameplay lies. Each of the levels require you to place a series of colour-coded shapes in an adjoining fashion; much like matching the shapes within a Tetris game. By connecting these blocks, the crops within them begin to grow, until they reach a stage where they can then be harvested. The more you grow and harvest, the larger your points bonus and the higher your star reward is. In a similar vein to mobile puzzler games, each level awards up to three stars and specific areas require a certain number of stars to become unlocked. However, there are a series of other elements within the game to help make things interesting and keep the gameplay feeling fresh.

As you progress through the game, the level requirements can change. Some require specific orders that need to be fulfilled, for instance, a certain amount pumpkins and a certain amount of tomatoes need to be grown. Some levels focus on feeding cows and milking them, whilst others work on a similar premise to growing crops, but require you to form ponds and fish them. However, each level is also timed, forcing you to be quick as you connect plots of fruits and vegetables, fulfil orders and accrue your score in order to receive the maximum amount of stars. With each level lasting merely minutes, this is an ideal casual game that contains a pick-up and play mechanic; as well as that addictive premise of just one more go.

As well as the basic pattern of connections, you can also grow your crops to activate frenetic bonuses that can rack some truly impressive scoring. In order to activate this ability, you need the place your blocks to produce a large patch of farmland upon which to grow. The larger the plot, the larger the fruits and vegetables can grow. Create a super-sized tomato or pumpkin and the bonus is triggered which sees huge numbers of crops growing continuously as you run around and pick as many as you can. These can sometimes be the difference to obtaining a good score and an incredible score; thus achieving your three-star rating. 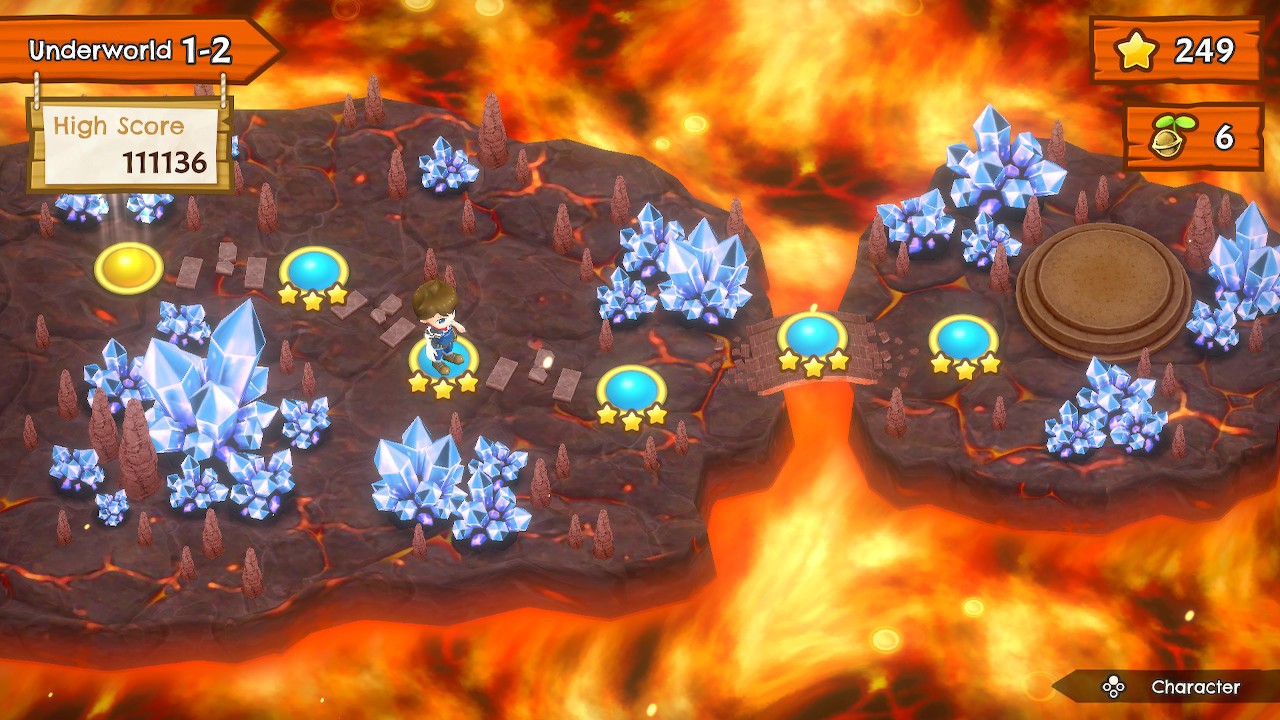 However, some of the levels also contain a number of hazards which can hamper your ability to harvest effectively. Plots of land that can’t be harvested due to growing the wrong crop or being the wrong shape or size, although a handy little sprite does hold a waste basket to dump your mis-shapes into. Further levels brings stampeding cattle that flattens your crops, or burning lava that frazzles your vegetables. All of its elements combine to produce a puzzle-styled adventure that is actually great fun to play; it’s down-side though, is that it is far too easy to win the maximum amount of three stars per level. This could be disappointing to seasoned puzzlers, although it does make it an ideal family game or a puzzler for younger audiences.

It’s actually in its family-style level of presentation and gameplay that the game really excels though, especially with its ability to a play locally with up to four players. The game takes on a whole new meaning when played in a multiplayer capacity; although it does also make it significantly easier too. However, having one person fit the shapes, while the other person harvests or having one person focus on tomatoes, while the other grows pumpkins does produce some hilarious results that kids will love playing. In fact, this does feel like a title that is targeted more to younger viewers, with a particularly child-like presentation and series of rewards that younger audiences will love and in all honesty, its in this respect that the game is best played.

Overall, Harvest Moon: Mad Dash offers a good variation on the themes of the original games. Be warned though, if you’re expecting another adventure that runs in a similar vein to the adventures of old, you may be bitterly disappointed if you take a bite. As a puzzle game though, it works extremely well and its mad-cap nature does make for some frenetic gameplay. However, the developers needed to balance the level of challenge here, with none of the levels really presenting much of a challenge; especially to players who are familiar with the concepts of puzzle games. As a family or child friendly game though, that can be played solo or locally in multiplayer, it actually excels in the fun it can offer. Its certainly a game worth harvesting, but its fruits may not appeal to everyone.

Harvest Moon: Mad Dash harvests an abundance of family-friendly and frenetic puzzling, but its fruits may not as sweet tasting to everyone.