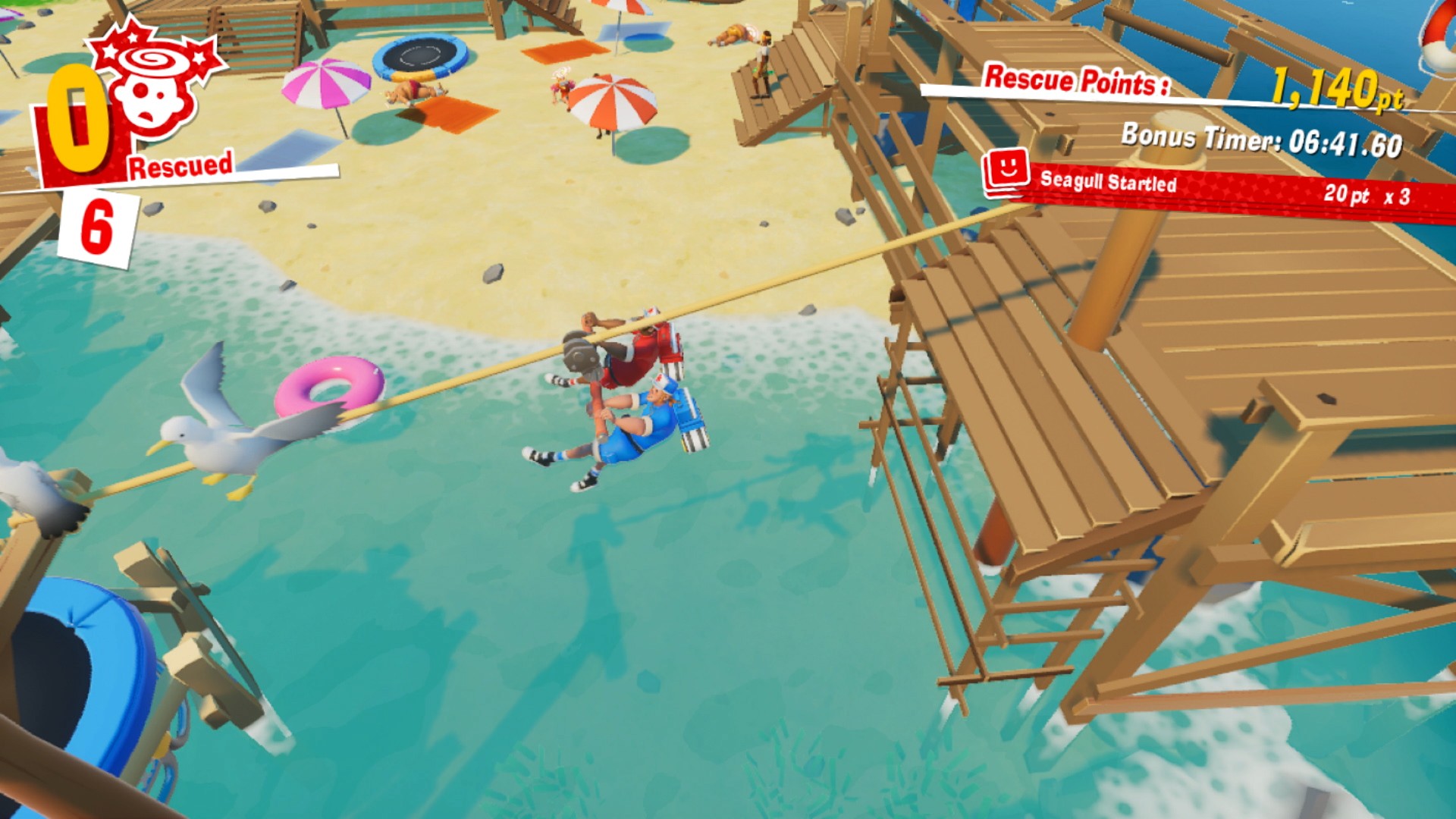 Who loves surprises? Really! Well, I do. Whether it be some unexpected good news, an unforseen present or even a game that turns up on the Nintendo eShop that secretly sat under my radar until its release. One such surprise was revealed recently, with a new game coming out of nowhere to make an appearance on the Nintendo Switch store front. I’ve not come across any previews, trailers or screenshots; I’ve never even heard a whisper through the grape vines of Direct presentations. Yet, as if appearing out of thin air, comes one the most mad-cap, hilarious and ultimately, playable games to see a release on the Nintendo Switch. And that game, Ladies and Gentlemen, comes in the form of The Stretchers.

Developed by Tarsier Studios, with publishing through Nintendo themselves, The Stretchers is primarily a co-op puzzle adventure. You play the role as a stretcher bearer or paramedic, as you respond to a series of emergencies, scoop up your patients (literally) and return them to your home base in order to cure their ails. However, to add a touch of comedy, everything is presented in wild and wacky way, from air-time ambulances, cartoon aesthetics, rag-doll physics and a number of environmental challenges that need to be overcome in order to reach every single person that need rescuing. If you think Crazy Taxi mixed with Two Point Hospital, then you’ll be half-way there to painting a good picture of what this game portrays.

The game takes place on the island of Greenhorn; a small archipelago of several districts of farm lands, towns and resorts. You and a colleague, both work as the islands’ paramedics and, now thanks to the dastardly plans of ex-colleague, Captain Brains, you’re both going to have a hectic shift as you race to cure the island’s townsfolk from an outbreak of the dizzies. Thankfully, the doctor’s surgery next to your ambulance station has just installed the De-Dizzier 3000; a conveyor-belted device that can instantly cure the patients who have been infected. It’s your job to drive your ambulance as fast as you can to each area of an outbreak, gather up all the infected people and bring them to the surgery in order to cure their ailments. 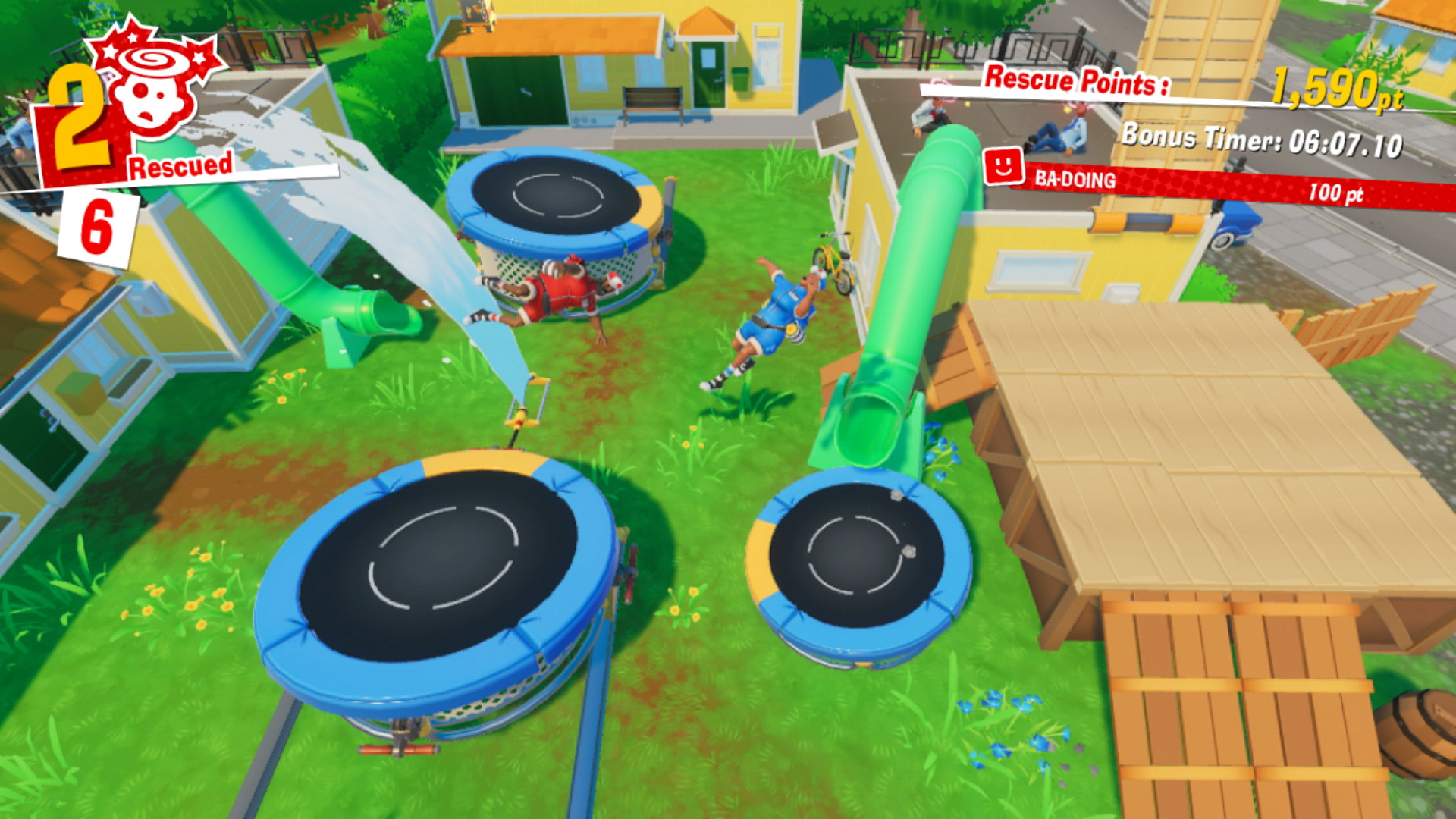 In order to achieve this, you and your partner must pick up the patients with the use of a stretcher. However, each of the environments also contain a number of environmental hazards that need to be overcome in order to pick up each and every patient that requires your help. These can range from circular saws that traverse back and forth, trampolines that need to re-positioned, zip-lines that need to be zipped and bridges that need to positioned; as well as a whole host of other wild and wacky obstacles. As you and your partner reach the areas where the patients reside, you both take either end of a stretcher and scoop the people suffering from the dizzies up onto it. From here, you can literally throw then into the back of your ambulance, or if you’re suitably brave, scoop up further patients and balance them all on one stretcher.

There’s a huge amount of variety within each of the levels, as well as the ability to replay them through time attack modes. Aside from the main missions, the game also contains a number of side-quests when there are no pending emergencies. These offer a change of pace with tasks such as cutting down trees which are causing an obstruction to bomb disposals. To add a form of longevity and replayability, progression also unlocks a sticker book which acts as a form of in-game achievements, requiring to catch air-time in your ambulance, stack specific numbers of patients upon your stretcher or wreck a specified number of objects, such as the scarecrows that reside in the fields.

A lot of the fun within this title though, comes with the control scheme and navigation of your paramedic crew. Being a two-man operation, each character is generally consigned to each joy-con; meaning that you control both characters, one with the left joy-con, the other with the right. Playing the game in a solo capacity can take some getting used too, although you do have the ability to instruct your partner to follow you automatically; something which helps immensely. However, trying to carry your stretcher whilst using both joy-cons to navigate each character independently from each other is absolutely hilarious; even more so if you play in the game’s local multiplayer capacity, where each player controls each paramedic. The need to work together and instruct each other produces one of the most playable co-op games I have witnessed on the Switch. It’s eye-wateringly funny and a pure joy to play. 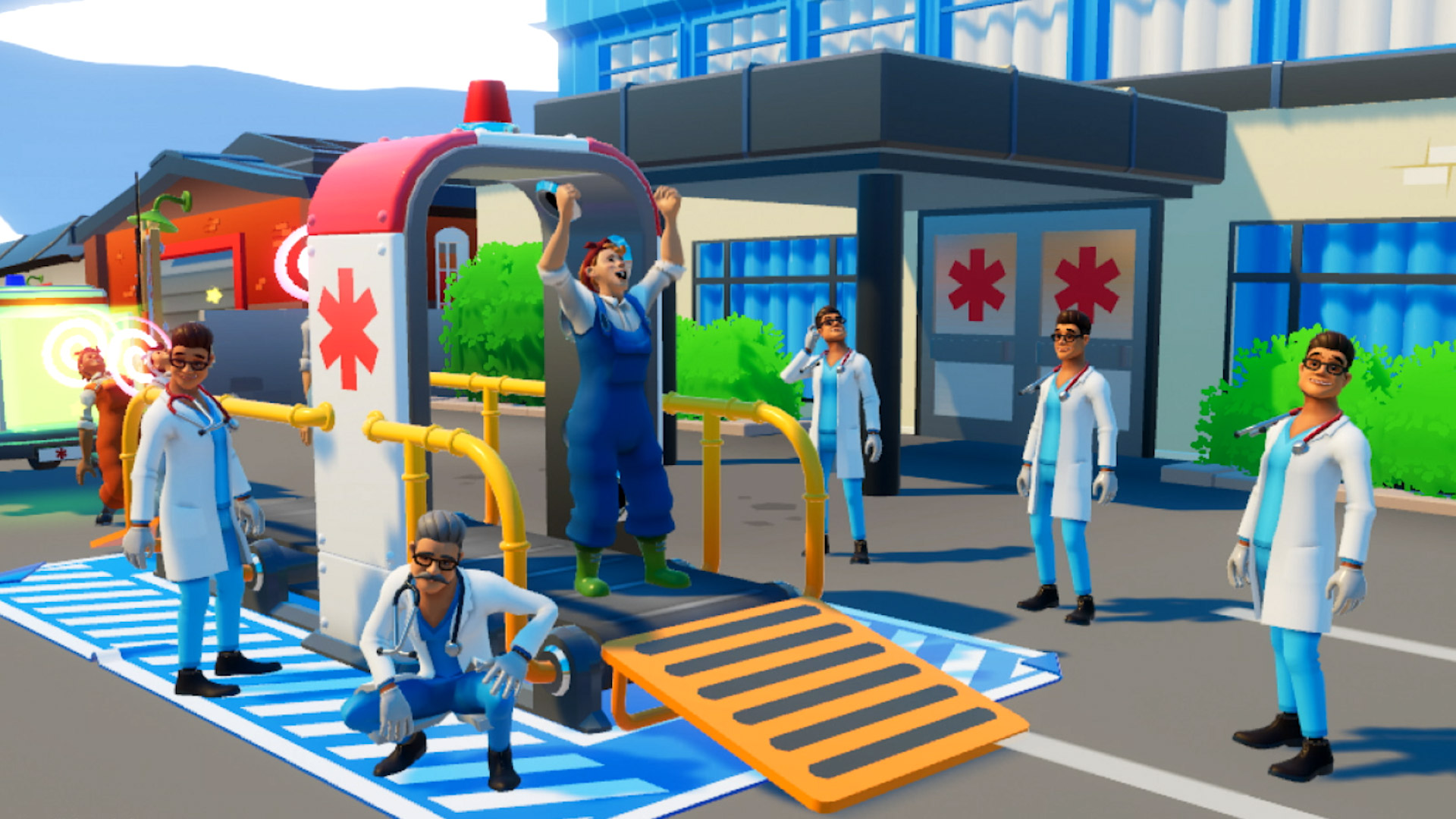 Although the game is relatively short, clocking in around five hours to finish its campaign, it holds a variety of extras to keep you coming back. These can range from the aforementioned achievements and time-attack modes, but also contain extra objectives such as finding specific objects or opening certain areas to some cosmetic additions with which you can change the uniform of the paramedics; creating some, again, wild and wacky options. It’s in this premise of mad-cap mayhem that game excels and ultimately, produces its playability, from controlling your characters, flinging your ambulance around the game world, solving the environmental puzzles and general comedy of the game that makes it so appealing.

Graphically, the game takes on a very rich and colourful aesthetic that suits the overall style of the game. It navigates and controls really well, often producing something of interest as you race to each emergency. In fact, the game promotes going off-road and smashing everything up or taking to a series of ramps to bolster the scoring for each level or attack the times. The musical scores also matches the gameplay, with some comical tunes that speed up extensionally during certain comedic moments throughout the game. There were no technical issues or bugs found throughout my play-through with the game, although there were instances of some slight frame-rate drops; although these were very few and far between and never detracted from the overall gameplay.

Overall, The Stretchers is one of the most satisfying surprises that I’ve had all year. The comedic values held within this game makes it an absolute blast in solo play and explodes to thermo-nuclear values when played with a friend in co-op. It simply oozes quality in everything it does and although it’s a relatively short experience, it holds enough modes and incentives to warrant a return. It certainly hasn’t stopped me from playing through its mad-cap mayhem again. It’s also a very unique game and certainly is unlike anything else that resides on the memory card within my Switch. The only gripe I can find with the game, is its co-op functionality won’t work for the Switch Lite; requiring you to acquire another set of joy-cons if you want to experience the best way to play this game. So, if you fancy a nice little surprise this year, then why not unwrap this over-the-top game that holds an abundance of comedy and gameplay upon its very mad-cap stretcher.

The Stretchers should come with a health warning, as its mad-cap co-op mayhem will have you laughing all the way to the hospital.