If you have ever watched a romantic comedy called The Ugly Truth then you may remember close to the end of the film, the blonde bombshell asks the suitably rough around the edges but ruggedly handsome male lead why he loves her. He replies simply “Beats the s*** out of me”. This scene is stuck in my mind whenever it focuses on actually reviewing Alvastia Chronicles. I like it a lot but really am not entirely sure why.

The plot is typically standard JRPG fare, i.e. ancient evil reappears threatening imminent doom and. of course, that evil is implicated in a family tragedy for the main protagonists. In Alvastia, that ancient evil is manifested in the form of the Archfiend and his elementally-inclined four lieutenants, the Tetrarchs. The Earth Tetrarch was responsible for the brutal murder of the parents of Alan and Elmia. Fast-forward and Alan is mute under the care of Elmia in a village which they both play a pivotal role in protecting, until the day a routine patrol reveals the continued existence of the aforementioned arch-nemesis.

In the first attack by the Archfiend, the damage was so severe that the residents of Alvastia decamped en masse to a sky world held up by pillars which served both to support the new world in the sky and imprison the Archfiend. Until now, obviously. As I said, pretty standard JPRG fare, so nothing to set the world alight. 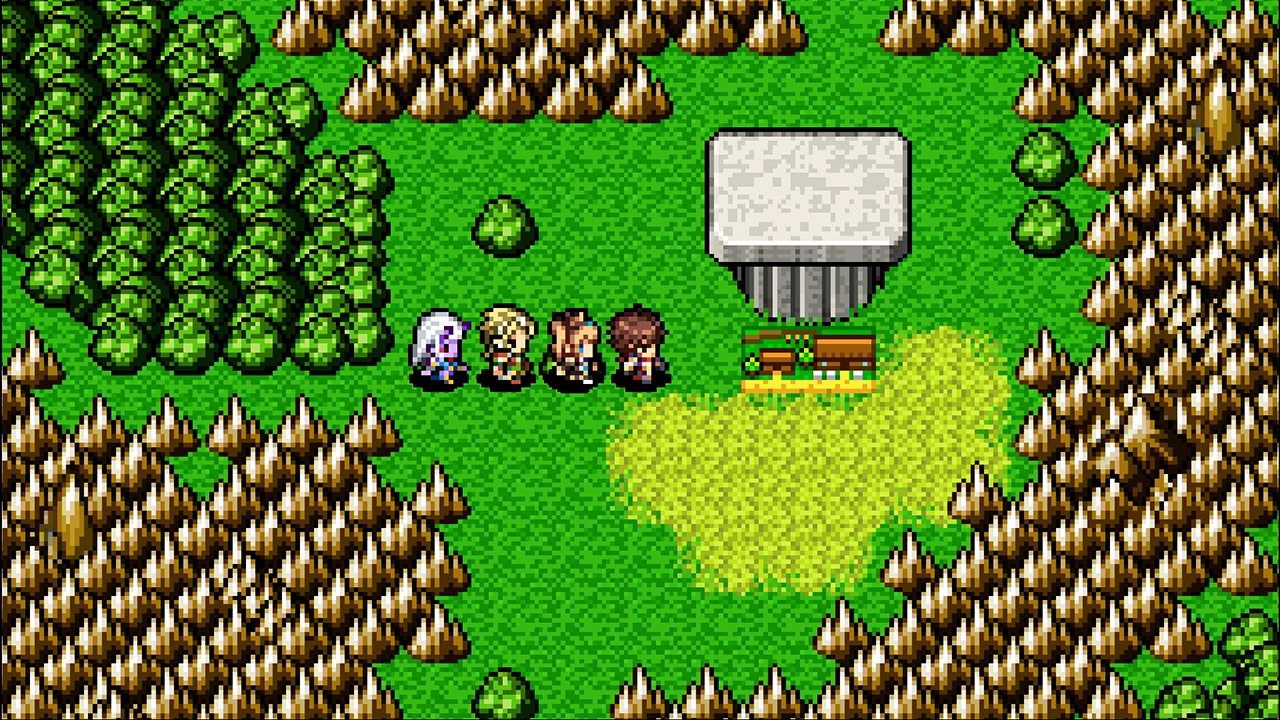 As you can probably see from the screenshots, the graphics are definitely not groundbreaking either and would not seriously overwork an SNES, let-alone a Switch. Sound is non-invasive and pleasant enough and unless you are going to produce a memorable orchestral score that is pretty much all I want from an RPG experience.  Some people will find this low-tech approach charming and others will find it off-putting. I lean towards the latter camp. If you have become accustomed to driving a Rolls Royce, Mercedes or BMW it is hard to feel content with a Mini Metro. We are used to games pushing the boundaries of what our next-gen machines are capable of and it is hard for a 2D ugly duckling like Alvastia Chronicles to stand out in that environment. It led me at first to expect something low key.

Alvastia Chronicles is also heavily stat-based and menu-driven and again in that sense, it is pretty bog-standard and harks back to the days when there was something of a social stigma attached to admitting in public you liked role-playing games. Initially, again, this was a big red flag for me. However, slowly but surely the games awkward charm sucked me in. Some of the initial dialogue is weird and shocking. The Village Elder in Alan and Elima’s village clearly implies they are/could be involved in an incestuous relationship; he tells them to ‘get a room’. This theme of risque sexual referencing continues in a slightly less shocking manner when Gil joins the team and flirts with every woman that crosses your path, but especially the Ogre Raine.

100 companion slots which illustrate the scope for potential recruiting. Most will simply fall into your lap but some will set you tasks before they will join you. Currently, I have a pile of rubble and an Elf’s soul in a Crate in my party and I can’t help which variety of weird will come next. This is part of the intrigue of the game and it is something that does compel me to keep playing. However, it is natural that this will mean some of the companion’s stories simply won’t be developed. 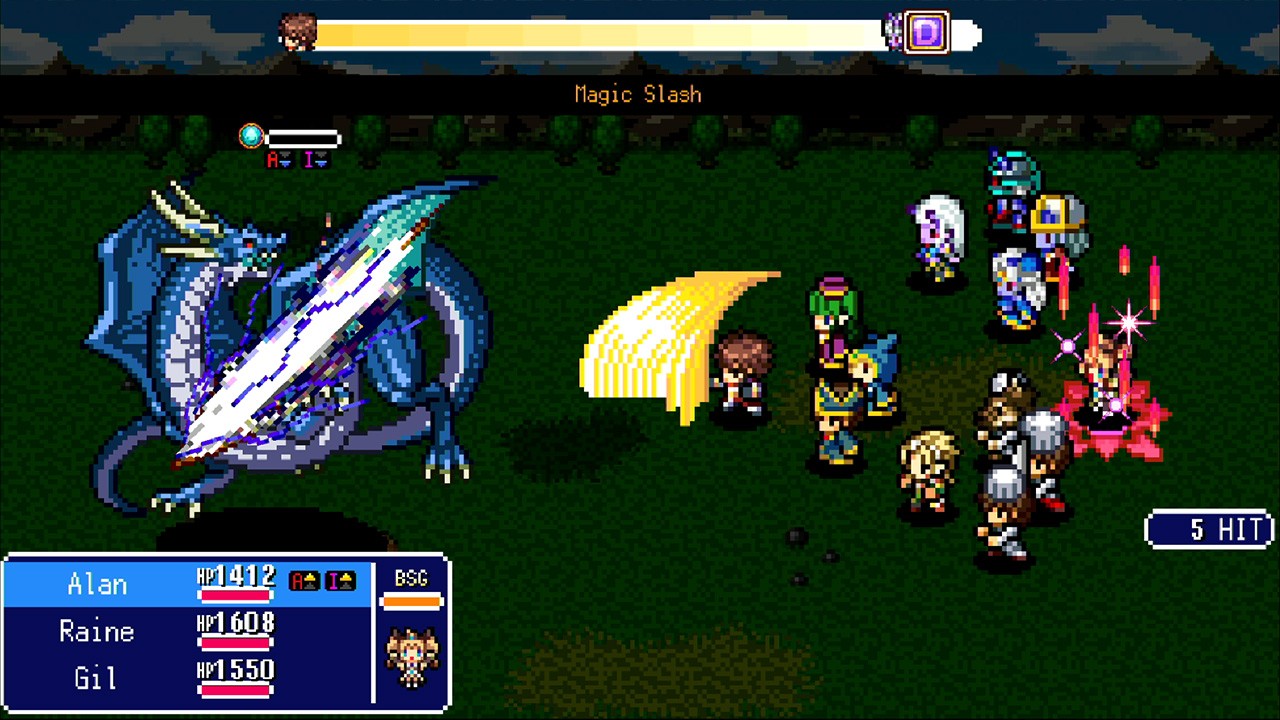 Combat flows quite nicely and is turn-based. I have 12 on the field currently and two full strategy rooms. The strategy rooms, where you can place other companions and also have them levelled up are a neat little addition. Supposedly they can offer helpful tips on how to deal with particularly difficult bad guys but I have not yet felt the need to consult. At first, my fledgling team was pretty pathetic but now at full strength it is a formidable fighting force.  Your teams can bond, which allows them to use different skills and when you hit certain markers, the game will reward you with various goody bags of items. Weapons can be synthesized and upgraded and armour brought etc, etc, nothing about this is groundbreaking.

If by now you’re feeling a bit head-spun, I don’t blame you. Maybe it is a bit too busy. I get a distinct feeling I could play through the entire game and barely scratch the surface of all the things there is to do or different ways to play. However, this has yet to make the game cumbersome or onerous to play for me and one supposes that this adds to the potential replay value.

In addition to the main story quest there are side quests which are pretty linear, of the fetch, carry or fight variety. They add nothing of real value in terms of plot or character development and this is a missed opportunity. With such a broad and varied cast of characters, the potential existed for some pretty amazing storytelling which really pushed the limits of the narrative and I have yet to see evidence that this will be the case. This is the first EXE Create & KEMCO JPRG I have played and I am curious now to explore their other titles but as I have said frequently they are breaking no new ground; they are simply doing something fairly well and in a charming way.

However, for what it is at the price it is, Alvastia Chronicles represents a worthwhile investment. You will find yourself wondering how it all ends and wanting to know, will Gil ever get his girl, will Alan ever actually speak? Etc, etc. It is ultimately worth your time and money simply to answer those questions.

Alvastia Chronicles is a budget-JPRG which while being pretty basic in everything it does also has a mysterious charm all of its own which will keep you coming back and wanting more.