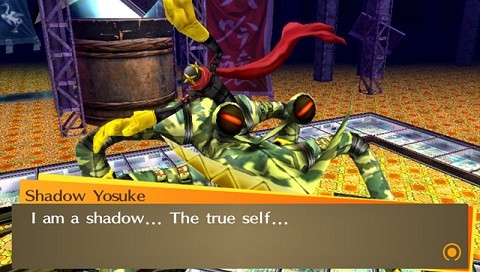 Persona is a game series that, at first, seems a little bit—how can I put it… weeby. So much of it focuses around interactions with NPCs that, at first glance, you may mistake it for a Visual Novel. Behind this façade, though, Persona 4 Golden is a game that succeeds in both its engaging story and strategic gameplay.

Persona 4 Golden is the second game in the Persona series that I’ve played. The first was Persona 3 FES, which I loved despite its flaws. Persona 4 is a brilliant sequel, with marked improvements in almost every department.

Persona 4 Golden foregoes the usual RPG trope of ‘saving the world’, instead opting for a murder-mystery angle, based entirely in the fictional town of Inaba. The protagonist arrives for a year of school, but shortly finds himself immersed in a murder investigation. You, along with a group of unlikely friends, work together to discover the identity of the culprit—and let me tell you, it’s quite the journey.

The story revolves around televisions. At midnight on rainy days, the twisted Midnight Channel appears on TV, featuring seemingly random residents of Inaba. After appearing on the Midnight Channel, the star is shortly kidnapped, and left for dead. You and your friends shortly discover a special ability—touching a television allows you to phase through the screen, leading to a dangerous, foggy world, filled with monsters. This is where those who appear are murdered, and it’s up to you to find out who is behind it all. 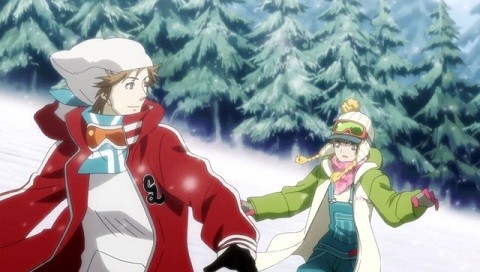 The TV world is where you do battle. Your enemies are ravenous shadows, who can only be defeated by those with the ability to summon a Persona. Personas are creatures summoned from the mind and controlled by your characters. Most people can only summon one Persona, but you can summon over 100 different creatures, allowing for unrivalled flexibility in battle.

Personas can either be found after battle or fused. To obtain the more powerful and useful Persona, though, you must utilise fusion wisely, allowing the newly formed creature to inherit the best abilities. This isn’t a game about grinding. The focus is instead on creating new Personas that benefit from Social Links and inherited abilities.

Battle is based around two fighting styles: Physical and magic attacks. Each shadow has their own strengths and weaknesses, and the same goes for your Persona. This is where the strategy comes in, as you must maintain and create new Personas so that you can cover your bases. Additionally, there are abilities that can affect the stats of enemies and allies, which can be crucial to beating some of the tougher bosses. Unfortunately, spell names are confusing, and take a long time to get used to. After 70 hours of Persona 3 and 60 hours of Persona 4 Golden, I still struggle remembering what each status spell does.

As mentioned previously, Persona 4 Golden has a huge focus on character interactions. They not only allow you to delve deeper into each character’s psyche, but also provide benefits when it comes to battle. Each Persona has an Arcana, each associated with a certain NPC. When you become closer to these NPCs, you can form Social Links, enhancing the abilities of Personas created via fusion. This may seem like a chore at first, but bonding with characters is a wonderful way to break up the repetitive battling. In fact, I slowly found myself invested in each character as their story progressed.

The main cast of characters is what makes Persona 4 Golden stand above its predecessor for me. I loved the story of Persona 3, but the characters didn’t grab me as much. Persona 4 Golden has an ensemble of unforgettable characters who I found myself genuinely attached to as the game progressed. This is only further enforced by the great voice acting. There’s no voice that sounds half-baked or unconvincing, each one portraying the emotion of the line perfectly. There is one character who has an annoying voice, but that’s completely intentional, and suits them perfectly. 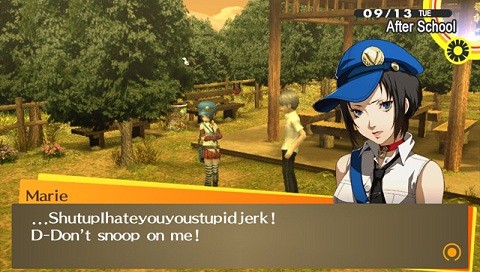 Graphically, we must consider that this is not only a PlayStation Vita title, but also a PlayStation 2 port. So technically speaking, it’s nothing impressive, but it is pleasant on the eyes, for the most part. The main thing I enjoy about Persona 4 Golden’s graphics is the detailed environments. Each area of the game is full of detail, with a ton to analyse as you watch cutscenes. There is an unfortunate motion-blur effect, but it’s easy to ignore after just a few hours.

Persona 4 Golden also has an excellent soundtrack, with many vocal songs I adore. Each of them feels emotional, even if the lyrics are a little nonsense. I was continuously impressed as the game progressed, each new track seeming better than the last.

I played Persona 4 Golden on the Normal difficulty, and found it easy overall. The game seems to have been ‘dumbed down’ from the PS2 release in terms of difficulty. For example, instead of being returned to your last save upon death, you can instead choose to continue from the beginning of the floor you’re on. If you’ve played a Persona game before, consider the harder difficulty.

Persona 4 Golden has a problem with knowing when enough is enough. There are many secret bosses at the end of the game, each making the player think that the game is over. In order to continue, though, you must do specific things to avoid each credits sequence. This ended up with me watching the credits sequence three times. That said, each additional dungeon was still a blast, and it’s certainly a step up from the filler Persona 3 was plagued with.

As for replay value, I think it’ll be a while before I return to Persona 4 Golden. It was truly a blast, but playing through the exact same story so soon isn’t my style. I can see some benefits in this, though. There is a ‘New Game+’ type thing after beating the story, and there are more Social Links I’d like to create and max out.

So, Persona 4 Golden—is it worth giving a shot? I bought a PlayStation Vita just to play it, and I don’t regret it at all. It’s certainly not a perfect game, and I’m not sure if I’d recommend going quite to that extreme, but you should consider it. Hell, if you can’t get your hands on a PS Vita, maybe even grab the PS2 version to experience this masterpiece.

Persona 4 Golden is the gold standard for Persona games. It takes what Persona 3 did, and blows it out of the water in almost every aspect. If you love JRPGs and own a PSVita, you’re doing yourself a disservice not playing Persona 4 Golden.

Only on PSVita—and who has one of those?

Drags on a tiny bit towards the end