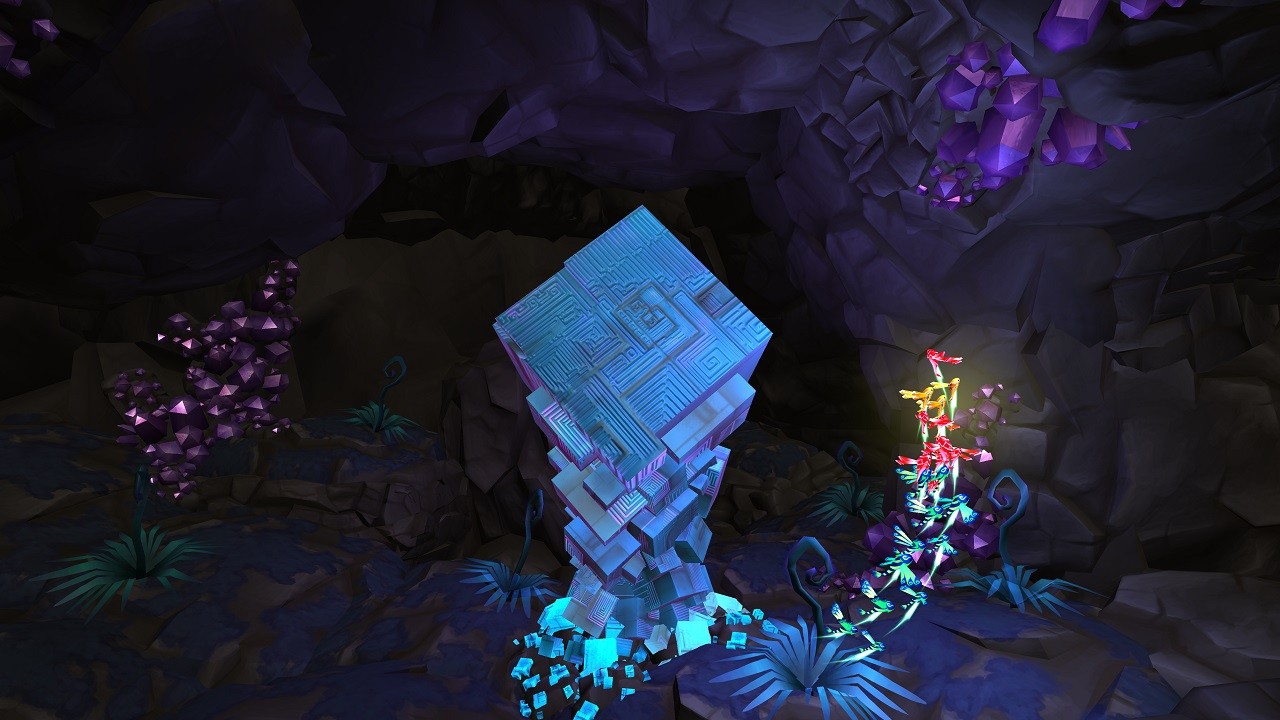 Lumini is a game from Speelbaars, a now-defunct Dutch studio whose portfolio prior to this game consisted entirely of a free-to-play browser game called Panda Pounce. Almost half a decade after Lumini’s original release on PC, 2Awesome Studio has picked up the rights to the 2015 title and has taken the time to port it to modern consoles – including Nintendo Switch, which this review is based upon.

I can’t speak for the source material, nor for the PlayStation 4 or Xbox One ports, but I have to say that Lumini has not transitioned well to Nintendo’s hybrid device. This was evident from as early on as the game’s opening cut-scene, which was littered with frame drops. Not a good sign, and I’m afraid to say that the performance doesn’t improve throughout the course of its two-to-three-hour story.

The game’s trailers piqued my interest with promises of gorgeous environments and free-flowing gameplay reminiscent of Broken Rules’ Chasing Aurora and SEGA’s Nights Into Dreams – games which have both managed to portray the delightful element of flight in a two-dimensional space. Unfortunately, Lumini’s gameplay is neither as tight nor as rewarding as earlier games in the sub-genre.

You briefly control a single lumini at first, before you meet a second and are gradually joined by an entire flock of coloured bird-like creatures. There’s four bird colours in total, and it’s your job to control which colour is “leading” your party at any given time. Enemies in the overworld are sporadic, but will require you to keep your red lumini at the forefront for a majority of the game, as their special ability allows them to emit a pulse-like attack which inflicts damage on hostile creatures and certain aspects of the environment. 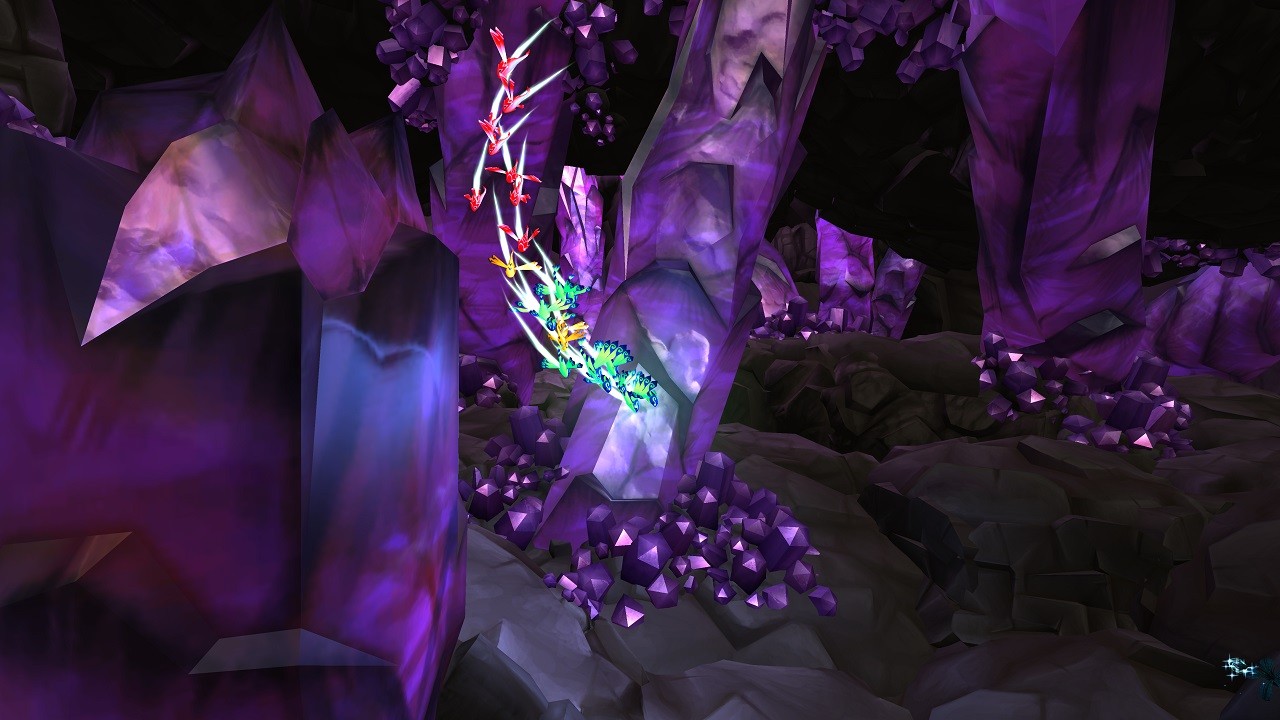 Unfortunately, combat is a clumsy affair thanks to a combination of design choices. Some enemies require multiple hits before they’re defeated, yet it’s these ones that can also move faster than your flock of lumini, resulting in more than a few creatures falling from your party in a less-than-fair manner. Other enemies take the form of plants which spew projectiles (often causing damage before you’re given the chance to react to their presence) and weird mouse-like creatures which latch onto one of your own feathered creatures.

The yellow lumini’s special ability is a sort of magnet, attracting distant orbs that get “traded in” for new lumini as you reach various checkpoints throughout the game. And, in all honesty, I never did figure out what the purple special ability does; and I only learned about blue’s boost feature as I was desperately trying to speed up the slow process of flying through yet another dull, empty corridor.

I found what I was looking for, then, with the caveat that using the speed boost ability usually means that the game’s framerate grinds to a near-halt – especially later on as your flock grows and there’s a lot of animated objects on-screen. To add insult to injury, that seemingly-endless corridor has to end somewhere, and I boosted straight into an enemy within a split-second of it appearing on-screen.

Pushing the right analogue stick in any direction will split your flock in half, allowing you to control the two bunches of lumini simultaneously by using both sticks. This forms the foundation upon which Lumini’s puzzles are built. They go to some length in alleviating the issue of empty corridors, but there’s a grand total of two puzzles at play, and they’re re-used a handful of times throughout the game.

Occasionally you’ll be tasked with holding one flock over a button whilst the other flock flies through an opened door before finding a second button, and holding that to allow the first flock to catch up. And then a couple of areas are blocked by doors which can only be opened by the perpetual motion of two windmills. You guessed it: your two flocks must fly in circles around the windmills long enough to let the power kick in, and open the previously locked area. As you can imagine, it feels about as fluent as patting your head whilst rubbing your stomach – and looks just as glamorous. These sections are just about anything but free-flowing or relaxing – two adjectives used to describe the game in its promotional materials. 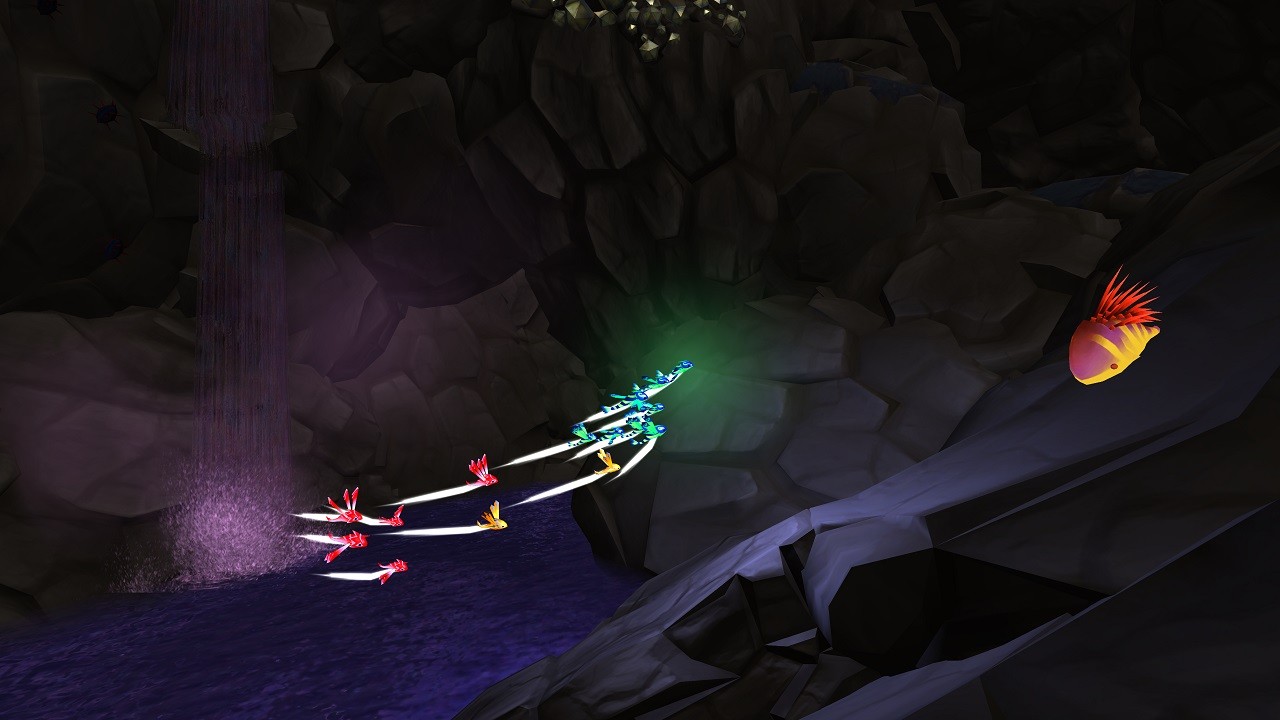 I haven’t really found anything good to say about the game just yet, so I should mention that the soundtrack is a fittingly ambient affair, which fits the slow-paced nature of the game whilst adapting to encounters with untoward species reasonably well. Visually, it’s plain at worst whilst some areas can look really pretty. However, there’s not enough variety in scenery, and I encountered numerous graphical glitches throughout, which certainly doesn’t add to the game’s ambience.

Both technically and mechanically, Lumini doesn’t have too much going for it. In an ideal world, I’d love to say something along the lines of “this game has a charming little story so the occasional frustrating puzzle and performance issues can be overlooked for the sake of this unforgettable journey.” Sadly, I couldn’t even tell you what the game’s story entailed. A short opening cut-scene introduces the lumini species, but there’s no clear objective aside from travelling from left to right whilst collecting a few orbs and crystals along the way.

Avoiding spoilers, I think it’s fair to say that the closing sequence is probably the most enjoyable aspect. The challenge comes from racing against a collapsing environment rather than cheap enemies and fiddly puzzles, but within a couple of minutes that segment – and thus the game – is over. And for what? I’m not too sure. I think the lumini species goes on to live happily ever after, but that’s purely conjecture based on the positive sound design.

In conclusion, I really can’t recommend Lumini to anyone. Having spent two or three hours with the game, I would’ve certainly felt short-changed had I paid its £9 price tag, and my primary thought as the credits rolled went something along the lines of “what was the point in that?” Lumini is sadly one of the most forgettable games of the past decade.

Lumini had the potential to become a stellar spiritual successor to the classic Nights series, but there’s just not enough style nor substance to warrant a purchase.

He's a web developer by day; by night, Martyn has been writing about video games since 2011.