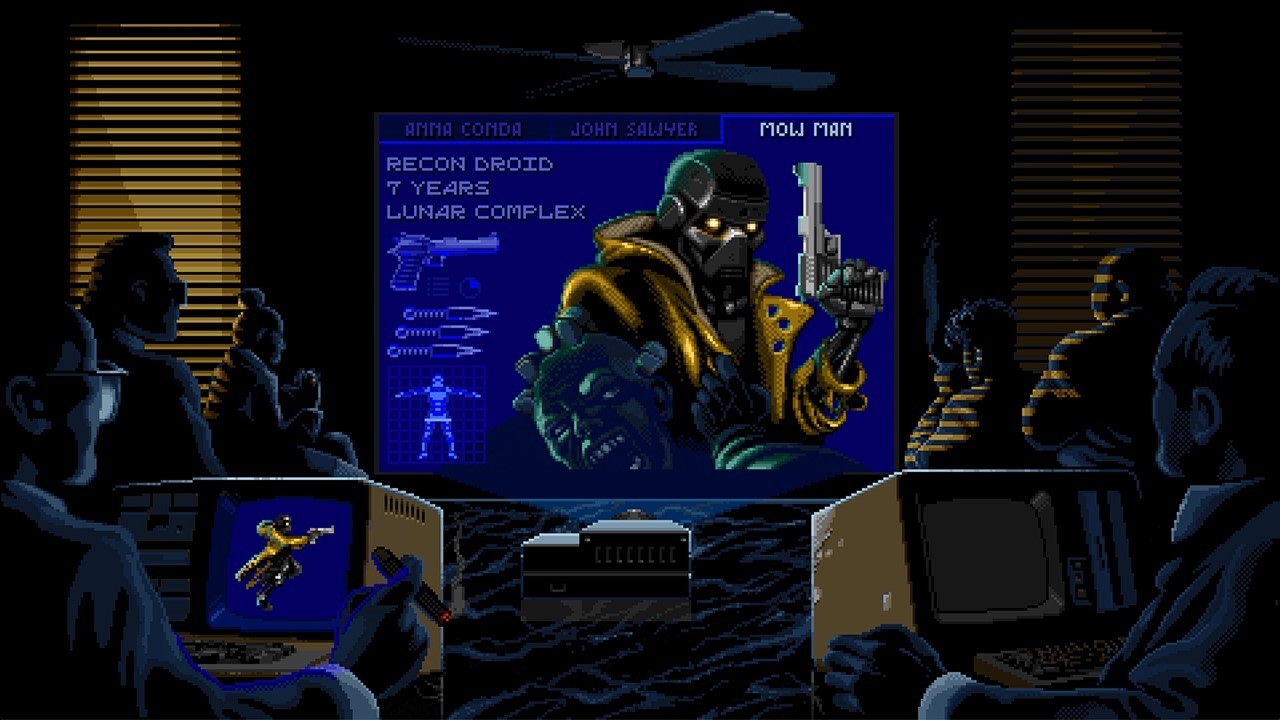 There have been a lot of things to come out of the 80s. Some good and some just down right awful. Mullets, Deeley Boppers, Leg Warmers, Shoulder Pads and the pop scene are just a few of the forgettable moments of that time. However, it did also spawn a few classics. Arcade giants like Outrun, Afterburner and Gauntlet were a few of my favourite past times, as well as a whole host of action movies that gave household names to actors such as Stallone and Schwarzenegger. In fact, the majority of movies from that time have achieved a cult status, not just amongst movie goers, but also gamers too. This can be attributed to their over-the-top set pieces, futuristic settings and all-out gore fests that splattered the screens with blood and guts. It’s a premise that’s been beautifully captured within the action arcade title Huntdown, as it bounties a release onto the Nintendo Switch.

Developed by Easy Trigger and published through Coffee Stain Studios, this 2D, side-scrolling shooter/brawler holds more muscle than Rambo and packs a mightier punch than the Terminator ever could. The game pits you as a bounty hunter within a future world that reigns in chaos and decay. With a society ruled by a number of ruthless gangs, your job is to eliminate the gang’s henchmen, whilst making your way through a series of contracted targets and bringing the neighbourhoods back under the control of the city’s law enforcement. It’s all presented in a retro-styled 16-bit aesthetic, one that perfectly encapsulates the gaming era of the eighties, as well as the action-packed heroics of many of its movie inspirations.

You play as one of three bounty hunters: The deadly assassin Anna Conda who can smell fear, the cyborg John Sawyer whose blood type spells out AK-47 and the recon droid, Mow Man, known affectionately as the Grim Reaper. Each have their own distinct play style and look, with various weapons and secondary attack options. From the on-board computer within each hunter’s vehicle, they receive contracts and intel on specific gangs from Wolf Mother, the shadowy, knitting-needled operative from the Shimamoto Corporation. With several districts of the neighbourhood now governed by a number of gangs, such as the Hoodlum Dolls, the Misconducts and the No. 1 Suspects, you’re job is to take out each of the five bosses that control each gang; by any means necessary. 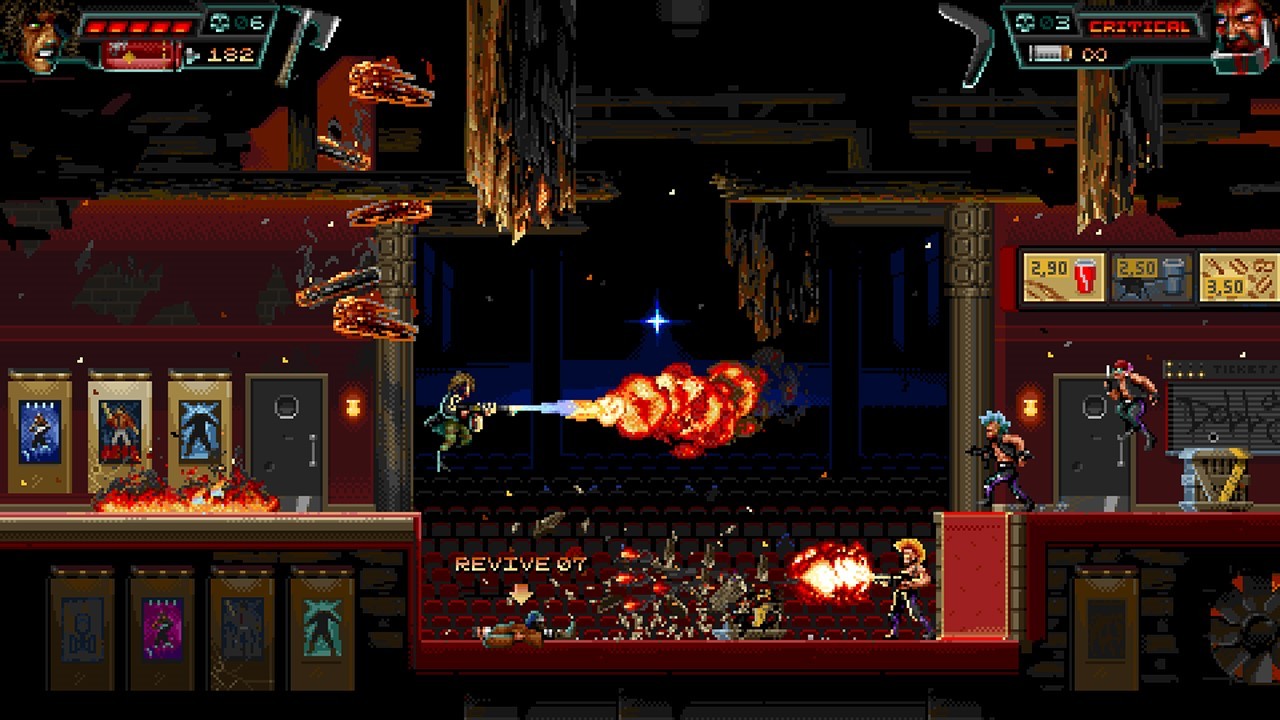 Once contracted, you need to work your way through a series of environments, taking out the gang’s hoodlum’s before facing each of the five bosses in order to free the neighbourhood. Each bounty hunter comes equipped with a default fire-arm and secondary attack, as they run, jump, dash and deal the damage through a series of multi-levelled stages. Using the environment, you can duck behind crates for cover, or slide into doorways to avoid the barrage of bullets from your gangland foes, as well as pick up fallen weaponry to boost your overall firepower. These can range from Uzi’s to shotguns and sniper rifles to rocket launchers. Although the levels contain a form of platforming, the main focus of the game lies solely around the decimation of the gangs through extreme force.

Each of the levels follows a set pattern in taking down each of the gangs. You work your way through five zones, starting off from your car and navigating an open area, before entering into a building and culminating in a face-off with one of the five bosses that control each gang. Once each of the bosses are eliminated and the gang taken down, you then return to your car, where you receive a new contract, a new gang to dispose of and another five bosses to eliminate. Despite the rigidity of its structure, each of the areas and gangs have their own styles and variants to keep things interesting. This is also particularly relevant when it comes to the boss fights, with each one delivering a tough challenge and a unique style of learning the patterns of their attacks and vulnerabilities.

One minute you’ll be taking cover and mowing down a horde of hoodlums as they pile out of the sewers or emerge from subway trains, before taking on the bosses in a wrestling ring or hockey pitch. The level of on-screen action, amount of bad guys and challenging bosses provides a stern challenge, but one that is very fairly balanced and never to the point of frustration. Sure, you’ll die and you’ll die a lot, but you’ll also learn from the experience and come back better prepared for what the gangs might throw at you. However, what brings you back time and time again though, is the satisfying level of gunplay and gameplay that this title holds. Weapons feel powerful and meaty, your control over your character feels sublime and the relentless action leaves you short of breath. In other words, it’s simply breathtaking. 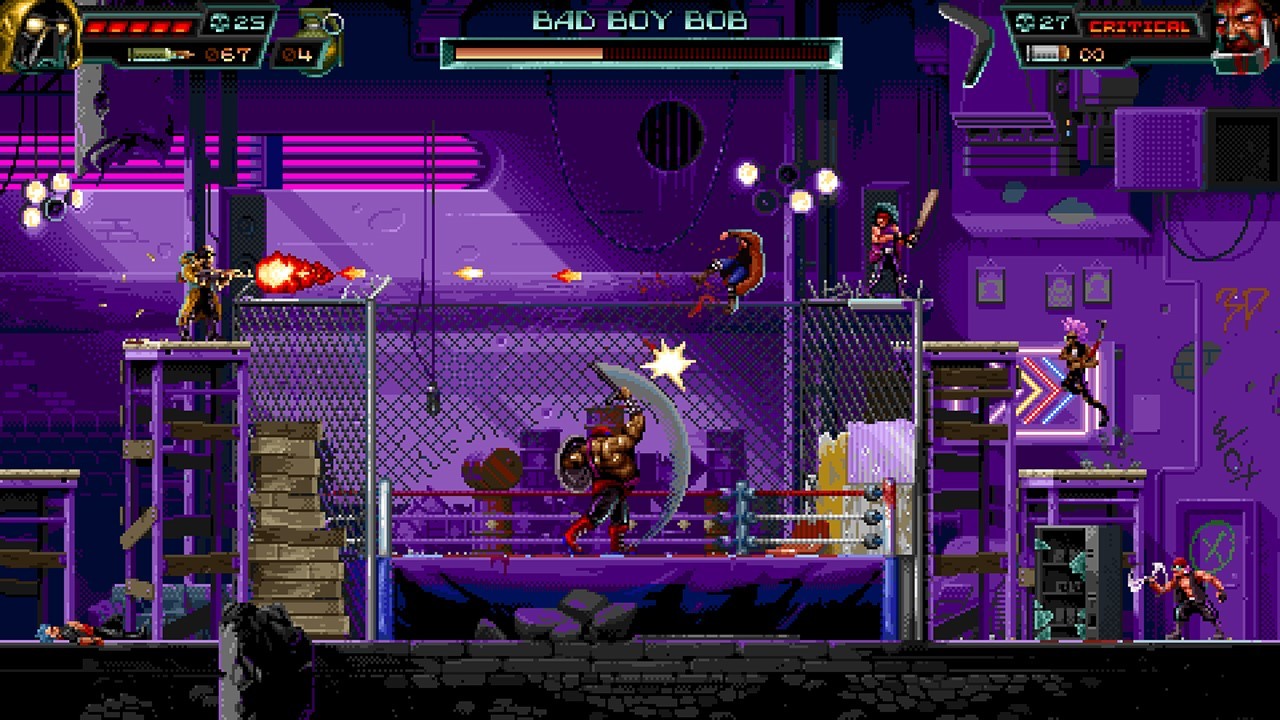 There’s a constant high-quality feel to everything that the game does, from a steady 60 frames per second to the clever level layouts that has you running and gunning, tactically taking cover and searching for a series of stashes in order to attain the maximum awards for each level. You can also bring a friend along for the ride too, with its two-player local co-op capability, as well as switch between the bounty hunters, at any time, to find a style that best suits your style of play. What the game does really well though, is capture the whole feel of the action-hero scenarios from the blockbuster movies of the 80s. From the soundtrack to the level designs and with the whole game overall, it contains a number of throwbacks that reminisce of titles such as Escape from New York, The Warriors and Robocop.

In order to provide long-term appeal, the game holds three levels of difficulty; although even on the easiest setting it still provides a tough challenge. However, once the campaign is completed, you then unlock a further ‘Badass’ mode which is absolutely brutal. Each of the levels also comes with a ranking system, requiring you to achieve a set number of kills, complete the level without dying and collecting a series of stashes that are hidden throughout; with some of them being carried by couriers that need to be chased down and eliminated. Couple this with a two-player co-op, you’re then left with a stylish package that performs slickly, is an absolute blast to play and boasts some impressive visuals and sounds to boot.

Overall, Huntdown is an expertly crafted throwback to the classic action heroes and movies from the eighties. Its retro style perfectly matches the era and its recreation of arcade perfect mayhem makes for a refreshing change. Everything here has been lovingly put together, producing a game that packs more than a punch. It’s immensely playable, yet challenging at the same time and its added extras, such as unlockable difficulties, local co-op, rankings, CRT filters, character styles and unique boss fights, all add to produce one of those rare gems that come along every once in a while and simply needs to be installed on your hard drive, or SD card in this case. The gunplay is meaty, the control scheme is tight and everything moves at a fluid pace. An excellent and thrilling game that simply needs to be hunted down for your collection.

If you love the action heroes of the 80s, such as Stallone or Schwarzenegger, then you need to hunt down Huntdown.