One of the major complaints from fans regarding recent entries in the Paper Mario series is the lack of partner characters. The original game for Nintendo 64 and The Thousand-Year Door had several characters that would follow Mario around and help solve puzzles and aid in combat. Super Paper Mario had pixls, which were thematically very similar to the partners from the previous two games, but they lacked the personality of the partners. While The Origami King has some characters that will follow Mario around during certain parts of the story, they aren’t permanent and don’t really aid Mario in any significant way. So with another Paper Mario game released without this particular return to form that many fans want, I thought I would take a look back on the first two games and discuss the best partners from them. I won’t be including the pixls, as I stated earlier how they weren’t as fleshed out as the partners from the first two games. Although these games are quite old at this point, there will be character spoilers. With that being said, let’s get started. 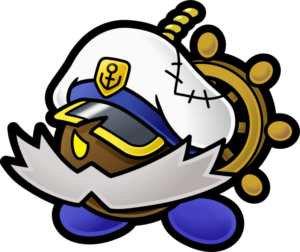 I think Bobbery was a highlight for a lot of fans of The Thousand-Year Door. Inside and outside of battle, he functioned very similarly to Bombette from the first game, but his character design and backstory elevated him above Bombette. When Mario first meets Bobbery, he refuses to help Mario because he doesn’t want to go back out to sea after a traumatic experience. Mario doesn’t know what happened at first, but later finds a letter from Bobbery’s late wife that reveals that she had passed away from an illness while he was at sea and he ended up blaming himself for not being there for her. It’s surprisingly dark for a Mario game, but it’s emotionally resonant and makes Bobbery stand out amongst the rest of the characters. Not to mention, the way the nautical theme is integrated into the traditional Bob-omb design for his appearance is very creative and well crafted. 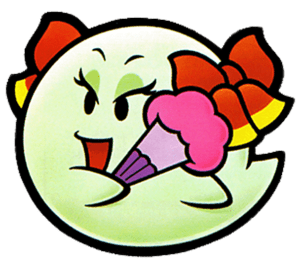 Bow doesn’t have a tragic backstory or anything like Bobbery, but she has a unique presence. Her relatively simple design also still makes her stand out amongst other Boo characters, not only in the Paper Mario series, but in the series in general. She has a very demure air about her when she wants to, but can easily switch into a more menacing appearance appropriate for a Boo. Inside and outside of battle, her signature ability to make Mario invisible is really helpful. Outside of battle, she can make him invisible to avoid enemies and sneak past them if you don’t wish to battle. During battles, she can prevent Mario from taking any damage at the next turn. Doing so makes her lose her next turn, but it’s a small price to pay to avoid some of the game’s more powerful attacks. 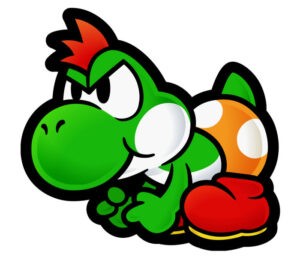 Yoshi is a great partner just for his uniqueness. Mario first “meets” Yoshi when he is still in his egg. Depending on how long Mario has the egg before he arrives in the story, even that hatches it, the Yoshi will be one of several colours. This makes Yoshi something that can be different in every playthrough. Mario also gets to name him, so my referring to him as Yoshi is just a placeholder essentially as he has no cannon name. Outside of battle, he functions very similarly to Parakarry from the original game. Which is to say, he helps Mario cross large gaps with his hover jump. It’s essentially just a skill used for traversal, though Mario can also ride Yoshi to go faster. In battle, his signature ability allows him to swallow up enemies and spit them back out at each other, which is superb for getting around enemies with high defence. A later ability to debuff enemies also proves very useful. 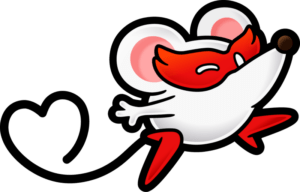 Ms. Mowz has the unique honour of being the only optional partner in the first two games. She is encountered throughout the story at multiple points in which she is seen performing some sort of heist before addressing Mario and his current partner and exiting in a flourish. She’s probably the one partner in the whole series who gets several moments of characterization before she joins the party. Mario can even encounter her without her disguise in her badge shop in the hub town of Rogueport. Once she joins Mario, after completing a side quest for her, she can sniff out various hidden treasures for Mario, not too dissimilar from Pokemon’s item finder. Given that Ms. Mowz is an optional partner, this skill is never necessary to complete the game, but it’s a nice boon to have if you’re trying to collect star pieces, for instance. In battle, Ms. Mowz is a little weaker to start with, but her main attack bypasses an enemy’s defence stat which makes it useful in several situations. 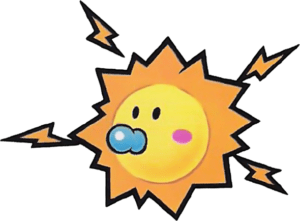 Okay, I’ll admit Watt is on the top of the list for more subjective reasons than the rest. I just think the idea of having a Lil Sparky as a main character/partner is a great idea. She actually is very similar to Ms. Mowz in a lot of ways in terms of gameplay, though. She can reveal hidden ? boxes which, sometimes, are necessary to proceed with the story, but sometimes, like Ms. Mowz, Watt simply reveals hidden items. In battle, she is also incredibly useful for similar reasons. Her main attack also bypasses defence. While Yoshi could debuff enemies, Watt can buff Mario’s attack. She can also paralyse enemies, which can be quite useful if they’re susceptible to paralysis.