After looking at the best partners in Paper Mario, I thought the next logical step would be to look at what the best chapters were. The way the series has been split into chapters has always marked very clear divisions in the game that led to the storybook feel the series is aiming for. Some chapters are certainly better than others, and while there aren’t any in the first two games that I believe are actively not good, there are definitely some I don’t look forward to. For the sake of consistency and because I am more well versed in the first two games, I will only look at those two again. So let’s go ahead and look at the best chapters from Paper Mario for the N64 and Paper Mario: The Thousand-Year Door for GameCube. They’re old games, but watch for spoilers.

5. The Mystery of Dry, Dry Ruins 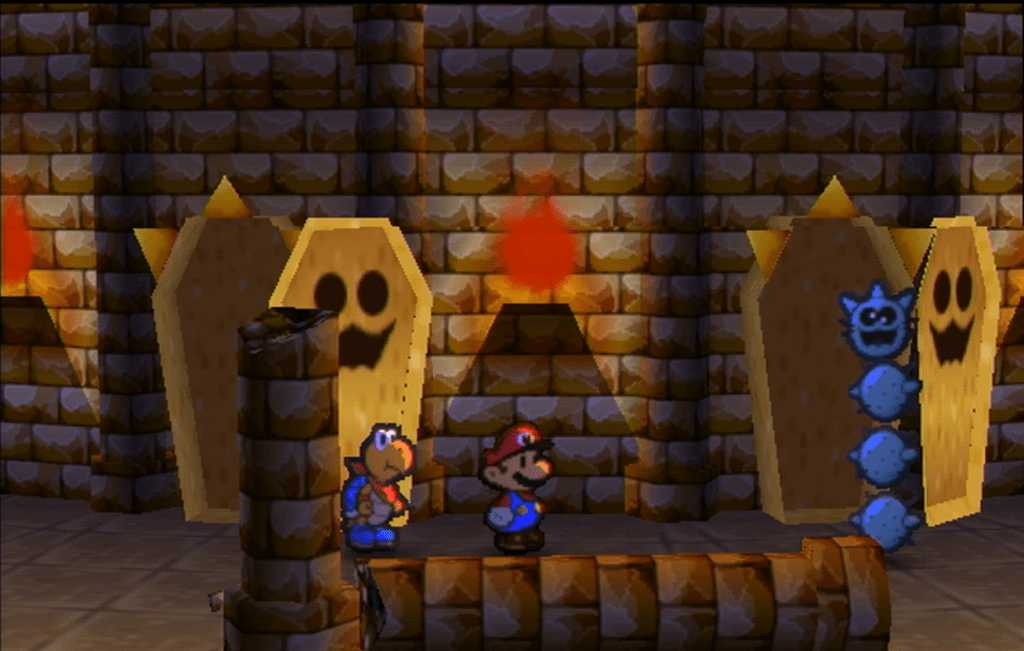 The Mystery of Dry, Dry Ruins is the second chapter of the original game. In it, Mario must trek through the Dry, Dry Desert and find Dry, Dry Ruins where the second star spirit is being held. Two things about Dry, Dry Desert really stand out to me. The first is the music. It’s honestly just perfect for the environment. It definitely evokes the feeling of a desert. The other interesting thing about the desert is just how expansive it is. It’s very easy to get lost if you’re not careful, but it’s also rife with secrets should you wish to explore them. One of my favourite areas in the desert is the oasis in which you find an upgrade block for your partners and some lemons and limes. The lemon and lime can only be found in the desert oasis, and while they aren’t super helpful in terms of use, I always found them fun to cook with.

Once Mario enters the Ruins, he is greeted by a ghostly voice that continues to taunt him and caution him against continuing as he progresses. The atmosphere of an old tomb that is potentially cursed is interesting, but it is successfully subverted by the ghostly voice accidentally dropping his menacing tone and freaking out that Mario is getting too close to the end. It’s a great blend of atmosphere and the levity of the Mario series. 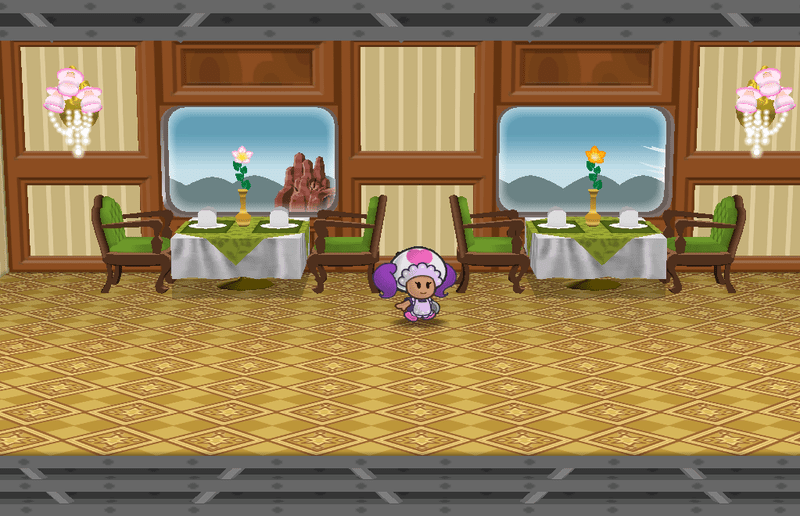 3 Days of Excess it the sixth chapter of The Thousand-Year Door. Here Mario finds himself on a luxury train where he works with a Bumpty penguin detective named Pennington to solve various mysteries on the train in an homage of sorts to Murder on the Orient Express. It’s one of a few chapters in the game that breaks the standard conventions of basically getting from Point A to Point B to find the next star and fight the boss. Pennington is also a very amusing character as he never learns Mario’s name properly and just generally provides wacky commentary to everything going on. The one negative I would have is that the final boss of the chapter seems a bit irrelevant to what has transpired before it, and it doesn’t really lend itself to the theme, but it’s a creative enough fight. The chapter overall is just a really creative break in the game that is really only joined by an earlier chapter I’ll discuss later. 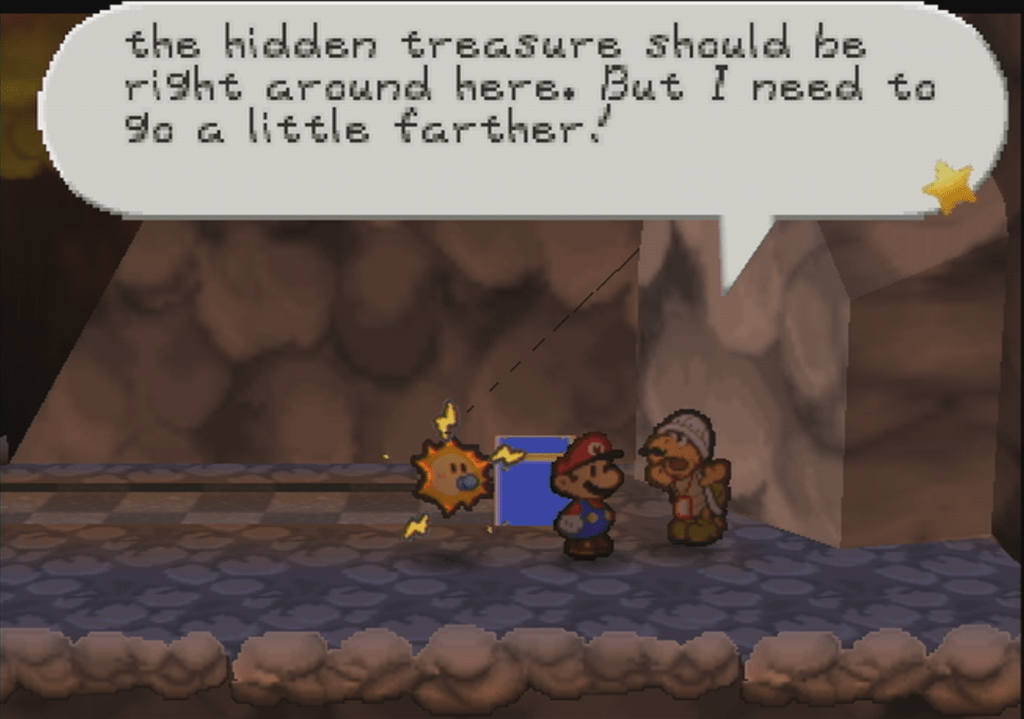 Hot, Hot Times on Lavalava Island is the fifth chapter of the original game. I can use one word to explain why this chapter is so good: Kolorado. While I adore the tropical island setting of the chapter and the appearance of the Yoshi’s (even if the hunt to find the missing Yoshi kids is a bit fetch quest-y), Kolorado is really what makes the chapter so amusing. He’s obsessed with finding whatever treasured is rumored to be on the island and his goals often find him working alongside Mario to proceed, but there’s just great slapstick comedy as he continues to rush on ahead and throw himself into danger, whether that’s standing in front of a boulder Mario sets free to break through a wall or getting burned by lava. It’s just really great. There’s also a nice juxtaposition between the water and fire aspects of the chapter. You get a new partner, Sushie, fairly early on in the chapter and she allows you to swim in certain areas. You spend the front half of the chapter making use of this ability, before you enter the volcano and are now presented with a bunch of fire related obstacles that Sushie is actually still very helpful in dealing with because of some of her water abilities. Between Kolorado and the general environment of the chapter, it’s just really memorable.

2. Of Glitz and Glory 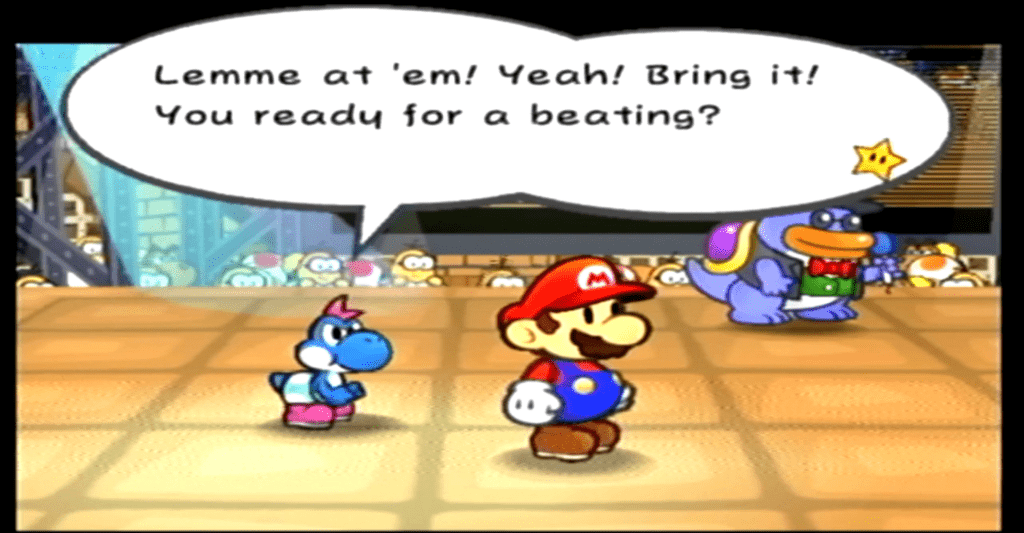 Of Glitz and Glory is the third chapter of The Thousand-Year Door. I love this chapter so much. I actually am playing through the game again now and just finished this chapter and I will admit it’s actually very simple, but it’s still just so good. In it, Mario must enter The Glitz Pit, and become an arena fighter. You basically just have to climb up through the ranks of the fighters until you reach the end, but there are twists and turns thrown in as you proceed. The fighters go missing and you receive cryptic messages from an anonymous source telling you to investigate the disappearances. It’s a really simple concept, but it’s just a good mystery and it’s fun to play. You get a break from most of the puzzle solving instead are presented with all different types of fights that still put your problem solving to the test, because some enemies have unique characteristics and you’re told by the owner of the arena to complete the fight with specific conditions.

During this chapter you also encounter Ms. Mowz and gain the Yoshi as a partner, both of whom I praised in my previous piece on the best partners in the series. Yoshi really becomes an integral part of your team during this segment, as you only gain him after losing to one set of fighters. They cannot be defeated without his Gulp ability. Even once you’re past them, the Gulp ability remains helpful all throughout the rest of the chapter. All of chapter 3 is just really well put together and provides the first break from the traditional gameplay that the aforementioned chapter 6 eventually adds to. 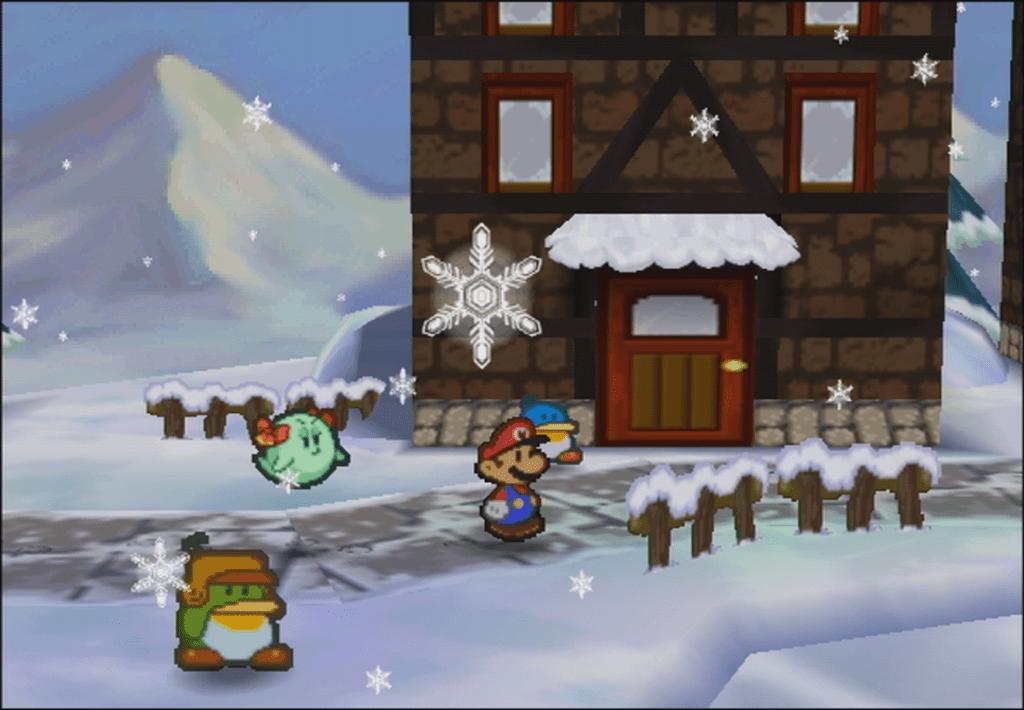 A Star Spirit on Ice is the seventh chapter of the original game. I’m just going to be honest, I’m a huge sucker for ice levels. I know most people hate ice levels, but I love them and they tend to have great music and a great atmosphere. Not only does Chapter 7 have great music in the dungeon portion, the Crystal Palace, but it has great music in basically every area of the chapter. The beginning of the chapter also has Mario solving a murder with a Bumpty author named Herringway. It definitely feels like a precursor to Chapter 6 of the sequel. Once Mario solves the murder, he can then leave town and solve the mystery of the way to the Crystal Palace. Once there, he must solve a series of illusion based puzzles. The puzzles are so good, they’re basically all about mirrors, but not in the way where it’s like you have to rotate mirrors to direct light or something. Instead, the level is often split horizontally into two sections by reflective glass. And what appears to be a mirror at first turns out to be more than that as what Mario does on one side effects the other side which he can then switch over to at certain points, all while fighting off Duplighosts who keep trying to imitate Mario’s allies to spark division. The whole dungeon just plays wonderfully in perspective and has a beautifully unsettling song in the background the whole time, which combined with the great preamble to the dungeon, makes A Star Spirit on Ice the best chapter in the series.

The Paper Mario series is split into several distinct parts. Some of them stand far above the rest. Let’s take a look at the best chapters from the first two games in the series.