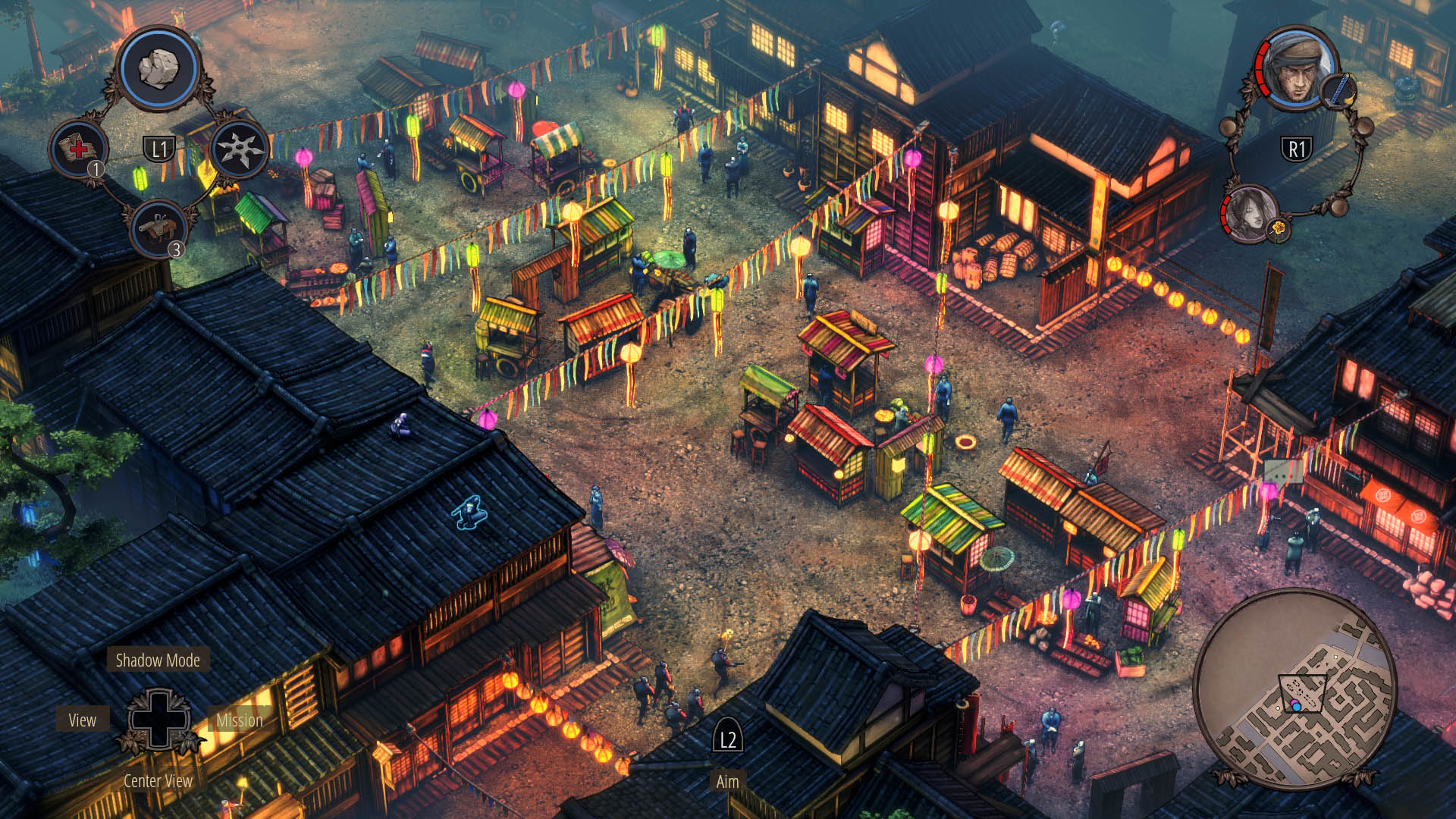 I haven’t played many games in the Isometric real-time tactics genre (well, I think that’s what the genre is called anyway), but I do have relatively fond memories of playing Commandos 2: Men of Courage on the original Xbox way back in 2002. It certainly wasn’t the best way to experience a game that was undoubtedly superior on PC, but as a console gamer, I didn’t really have much to compare it with beyond the more action-oriented likes of Cannon Fodder. The thing is, as good as it was, it was one of those games that I enjoyed at the time and then, well, just kind of forgot. Until now anyway.

The arrival of Shadow Tactics: Blades Of The Shogun on consoles nearly a year after its original PC release has reminded me why I enjoyed those games so much in the first place. Of course, it helps that this is a far superior port than those I was afforded with Commandos 2: Men of Courage and Cannon Fodder, but regardless of its comparative quality to its PC counterpart, the fact of the matter is, Mimimi Productions’, Shadow Tactics: Blades Of The Shogun represents a brilliantly enjoyable return to a largely forgotten genre, and a fantastic video game in its own right.

While many will always think of this type of game as being an atypically PC experience (and it arguably will feel more at home when being played with a mouse and keyboard), it’s testament to the developers skill just how well suited to consoles, and more specifically console controllers, Blades of the Shogun actually feels. This is a largely smooth and intuitive experience, and while the game poses a significant challenge, that challenge is by design rather than any sense of poor or clumsy implementation. Those who have played the game on PC might feel differently, but I never felt that I was at a disadvantage by playing the game using a controller (the ability to save with a flick of the d-pad at any point certainly helps to alleviate any potential stress). Still, whether your preference is to play the game on PC or console, Shadow Tactics: Blades Of The Shogun remains a tense, tactical and incredibly well-crafted experience. By essentially taking the template made famous by the Commando series and moving it to a semi-fictionalised feudal Japan setting, Blades of the Shogun manages to deliver an experience that feels simultaneously recognisable and new. The characters under your control are built upon similar archetypes and the structure is pure Commando, but a combination of a new setting and the time since the last tactically inspired release in that series (nobody is counting 2006’s somewhat lame, Commandos: Strike Force) ensures that the game never feels in any way derivative. It might not be particularly innovative, but after such a long wait, simply being really freakin’ good appears to be more than enough.

And it is just that (really freakin’ good that is); this is an expertly paced and brilliantly crafted adventure. Some might argue that it’s a tad too linear, but with such carefully designed levels allowing for some brilliantly improvised attacks, a relatively linear design seems like a perfectly acceptable sacrifice (if you could even call it that). Shadow Mode is a particularly satisfying element of the gameplay in that it allows you to move numerous characters into position before unleashing all of their abilities at the same time and subsequently taking down a large group of enemies in one fell swoop.

With each of the 5 playable characters (ranging from a samurai and ninja to a sniper and a…..tanuki!?) having a unique set of abilities and weaknesses, making the most of each character’s strengths and ensuring that your sniper isn’t left in a close range encounter goes a long way to guaranteeing success. This a game that rewards careful planning but somehow never feels slow or cumbersome. Those not accustomed to Blades Of The Shogun’s more tactical gameplay might be put off by the screen-shots and the promise of a more considered pace, but I would implore just about anyone to give this game a shot as, regardless of genre, what ultimately shines through is its underlying quality. Given the angle of the camera and the type of game that it is, Shadow Tactics: Blades Of The Shogun is invariably far from being a flashy game, but with its clean, crisp visuals, eye for detail and brilliantly recreated Edo period Japan (with its wisely taken historical liberties implemented with a decidedly deft touch), Blades Of The Shogun proves a decidedly handsome looking game, one that runs smoothly on consoles without coming at the cost to its subtle, but undoubted visual beauty.

It might not deliver anything particularly new and it’s certainly very reminiscent of the once great Commando series, but Mimimi Productions’, Shadow Tactics: Blades Of The Shogun overcomes its relative lack of new ideas by being a really good at just about everything it does. With a great cast of characters complete with a very well-balanced selection of abilities, some fantastic enemy AI, brilliantly crafted stages and a genuinely compelling setting, Blades of the Shogun finally delivers the return to this long dormant genre that fans of the Commando series have been waiting (all too long) for.