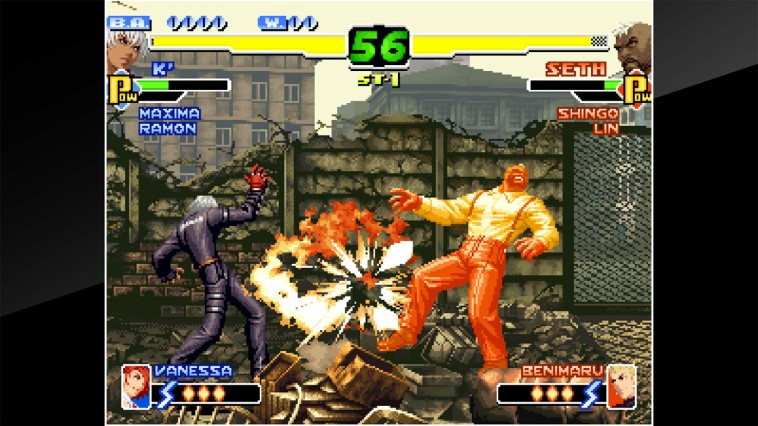 In my recent review of King of Fighters 99, I praised most everything about the game, from the huge roster of characters to the balance of fighting styles and the unique pivot of the “striker” character on the team. In fact, the only point that I really lamented was the dated graphics, as the widespread success of the Evolution remake on other consoles showed how good 99 could look with more assets to choose from and better technology to showcase the details. If others felt the same and found the lower quality of the appearance of the game to be the only drawback, then I am more than pleased to bring you my rundown of King of Fighters 2000.

The 2000 installment of the King of Fighters series sees an almost immediate plot sequel to the previous, which is interesting, given that the previous plot saga was totally removed from any of the events of the other 90s entries. 2000 is the true birth of the NESTs plotline, who were revealed to be the antagonists of King of Fighters 99. The game also is focused a lot more on the “teams” that exist within the canon to move along the plotline. Previously, you could mix and match fighters from all walks and experience the same kind of story, but that’s no longer the case. The hero teams have their own takes on how to deal with NESTs, and combining fighters that specifically inhabit those teams give completely different between fight exposition, so people invested in the strangely cohesive plot would do well to play through multiple times (a real challenge to folk who get comfortable with just one set of fighters). The whole thing feels a lot like the Street Fighter movie from the 90s, in terms of druglords, ultra powerful weapons and insane dictators. The storyline of 2000 was deemed so important that it came bundled together with King of Fighters 2001 when it was released on the PS2, so that people could get completely roped in. Fighters, by and large, don’t always get acclaim for their background tales (I even said as such previously), but a three part story line that also hinges on 2000 ending in tragedy (the bad guys win, technically, to enable 2001 to happen) was actually pretty fascinating. Granted, Mortal Kombat did the same thing with Shao Khan being the victor to spur off most of the future storylines, but that’s neither here nor there. 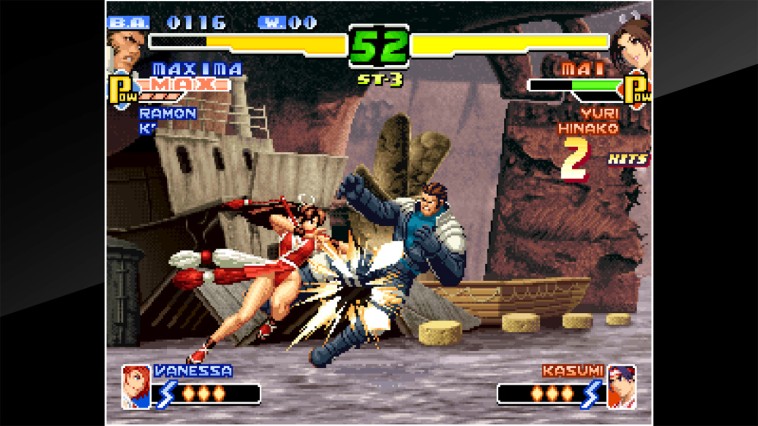 Gameplay wise, King of Fighters 2000 takes the same three players and a striker format as the previous 99, but with a couple of small but crucial changes. For one, Strikers can be summoned at any time as long as you have Striker Bombs instead of only during certain situations. Additionally, you can get more striker bombs through both losing (which was already a possibility) but also through taunting, which is a dangerous move in any game. The taunt is truly something of hubris, and it’s kind of nice to have a game give you a reward for taking a couple seconds to pose instead of actually being offensive or defensive. Having to make yourself vulnerable to the AI at any level is pretty risky, and doing it to someone who knows how to play the game is downright idiotic. Only taunt if you either are crazy far ahead in life or if you have nothing to lose and are pretty sure you can use the striker bomb next round to turn things around.

And the strikers take on different forms now, which is pretty spiffy. Each character has a traditional form and a special “striker form” they can take on to deliver extra attacks, but also to showcase a bit more of SNK’s history. The alternate striker forms are sometimes different costumes, but they can also be completely different characters, such as one fighter being able to turn into Fio from Metal Slug 2. Finding forms of fighters who are mediocre as players but pretty powerful as strikers is a great experiment in trial and error, and you can end up mashing up a pretty awesome team for versus mode (though, again, they generally don’t factor well into the storyline).

All the fluid goodness of the fight controls of King of Fighters 99 are completely present here in 2000. I gotta admit, I didn’t play the NEO GEO nearly enough during it’s heyday, and I didn’t know how long games were published and how great they truly were/are. This is the era when weird titles such as Project Justice (the sequel to School Rumble) and Asura Busters were coming out, and the Playstation, being in it’s sprint phase before the PS2 was released, were churning out wrestling fighters and other Western-centric titles. A lot of people I know considered the NEO GEO to be a has-been system, as it originally came out in the early 90s, but the bread and butter of SNK – fighting games – saw releases right up until 2004, with homebrew and unlicensed games released as late as 2012. I bring this up because King of Fighters 2000 feels like the groundwork for fighting games that you could find in arcades TODAY. Lag isn’t a thing. There’s so much clutch and mental combo work available that players only need to screw up once for everything to go to hell, and you simply need to work the counter in at just the right time to flip the table of the whole setting. It’s not nearly as insane as some of the current fighters (Marvel Vs Capcom 3 comes to mind), but you can still set up an amazing rampage that also lets the striker jump in and add additional punishment before anyone can really tell what’s going on. I’m not the player to do it, but I highly recommend checking out YouTube and seeing what was capable for players nearly two decades ago. And, as I said, the graphics are a huge step up. King of Fighters 2000 embraced the new millennium by having sprites that were mode physical models than static characters. There was a muscular feeling to each character, not in the hyper build sort of way, but in the fact that even the most cartoonish person felt incredibly human in their design and execution. The screen and stages are fantastic, don’t get me wrong, but, having just played 99, I was astonished by how much better everyone looked. Skin shading and clothing design didn’t end in pixels, but in sharp edges and tattered moments. Footwear, which you would think was important for fighters, suddenly had a lot of variety and distinct styles that matched the characters. No one was barefoot in 99, but I didn’t notice anyone’s boots, sandals or stilettos in the previous game. And, having survived the boob explosion that was Dead or Alive 2 and not copying that style, King of Fighters 2000 still decided to recognize their female fighters as having a bit more physique than their male counterparts, but without becoming too objectifying in the process. In short, this is simply the better looking game.

In fact, I’m here to say that 2000 is simply the better game overall. King of Fighters 99 is fantastic, and people who can play the Evolution edition should definitely do so with relish and vigor. But Switch owners are in an increasingly peculiar spot, with NEO GEO titles being released in no apparent order (probably as licensing is permitted) and there is only so much time in the day, so much space on the memory card, and only so much cash in the wallet. If you’re looking for the best of the King of Fighters (fitting, isn’t it?), then King of Fighters 2000 is the way to go. It’s got a robust roster, a better implementation of the Striker Mode, a stronger plot to follow (and hopefully to build for 2001 coming to the Switch soon), and looks absolutely gorgeous in comparison to 99. If you are looking for a great throwback fighter and already bought Garou, then King of Fighters 2000 should be next on your list.