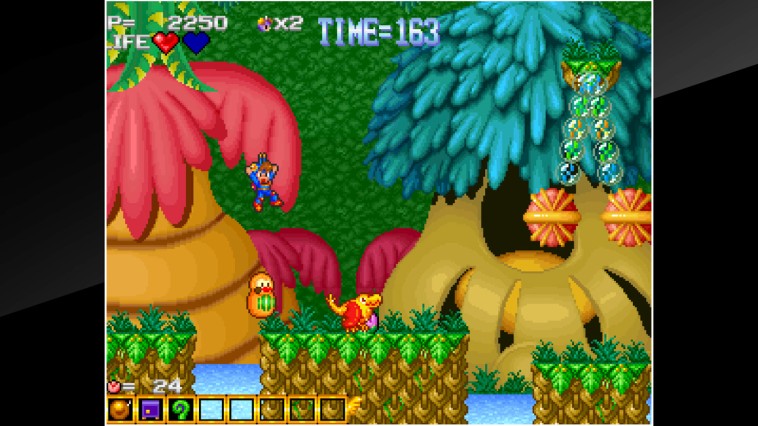 We all like to venture out of our comfort zone once in a while. Try new things, test new limits, make sure we still like what we like and we are open to different ideas. Every JRPG fan has gotta try a Western release once in a while, and every lactose intolerant person has gotta try that new Ben and Jerry’s flavor to see if it still makes them sick (it does). So when NEO GEO puts out a side scrolling platformer, something that inherently makes more sense on nearly any other console, you gotta shrug your shoulders and say “Alright, why not?” Which is how we ended up with Blue’s Journey, a weirdly unbalanced and directionless game.

Blue’s Journey, also called Raguy in Japanese, is the odd tale of our hero, Blue, who is out to save his planet, Raguy, from invading aliens who are polluting it and generally making it a bad place to be. The plotline is rife with some 90s inspired “Go Green” marketing that was super popular around the time, but it’s interesting to see Japan jump on it so heavily. The monsters themselves don’t really do much in terms of pollution or destruction, but, when you get a game over screen, it shows how Raguy gets turned into an industrial dump and everyone’s pretty sad. Hell, even the princess who asks if you want to continue actually guilt trips you and says you’re a “Bad Guy” if you decide not to finish the fight and save the planet. It’s pretty in your face and I was almost inclined to not continue as a result. 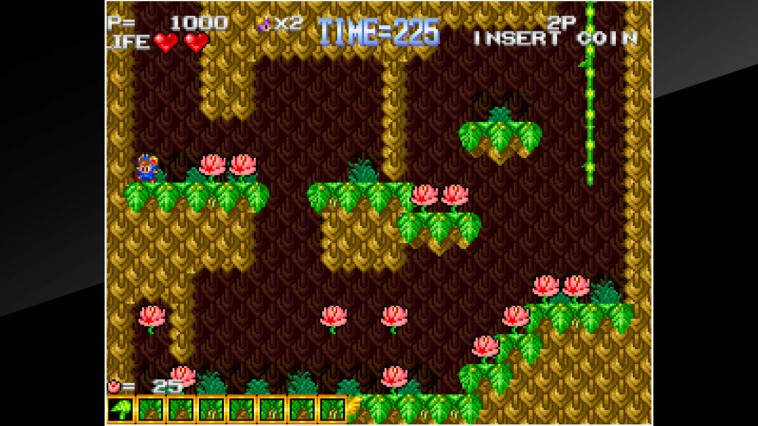 Gameplay wise, Blue has a slew of mechanics available that basically are useless bells and whistles. First and foremost, you got your shapeshifting. From the very beginning, Blue has the ability to suddenly turn himself into a smaller version, who can run faster and jump higher but also cannot attack. This seems like a pretty spiffy tradeoff, until you realize there are almost no places that Blue can’t get naturally. There’s even a power up that you can get along the way that makes you run faster, so, if you grab it, there’s no incentive to give up your attacking ability. Blue also changes weapons on occasion, moving from the leaf that he starts with to a freaking bomb attack. The bomb’s arc is wildly unstable to figure out, but it has the added benefit of blowing up the enemy straight away. If you have the leaf, it knocks enemies over but they can get back up again. You need to pick them up while they’re knocked over and throw them to get rid of them, which, incidentally, you can hit other enemies with a thrown enemy to clear the screen. Oh, and you can balance two knocked over baddies on top of each other to make a huge, sweeping column of bodies that can clear the screen. Confused yet? It only gets better.

So Blue’s Journey is a platformer, but it’s also a psuedo adventure game. There are shops where you can buy stuff that crop up if you find the item that makes shops appear. You buy stuff with flowers and absolutely none of it is permanent. If you get hit, you die, respawn almost in the exact same spot, but have lost all the items you found. It creates this dumb situation where you don’t want to buy things because you’ll just lose them when you get hit, but you can’t exactly save up the flower money and then cash out at the end of the game to use the currency elsewhere. And, if you don’t find the items that make the shops appear, you really can’t spend them anyways.

The bosses also appear to have been all designed on the contingency that you wouldn’t make it all the way to the end of the level without dying once. If you can only use the leaf, then the bosses of Blue’s Journey are…not difficult, but it at least takes a little more effort. If you still can hurl bombs, then you just avoid getting hit and can usually take them out in under ten hits. At least with Super Mario Bros you could only really fireball Bowser to death the very first time, and after that it was way easier to get to the axe. These bosses are all different but all missed the same class on “Blue can get bombs” and fall for it every time. I almost felt bad until I remembered there was a princess who was going to brow beat me if I didn’t keep going, and so I did. 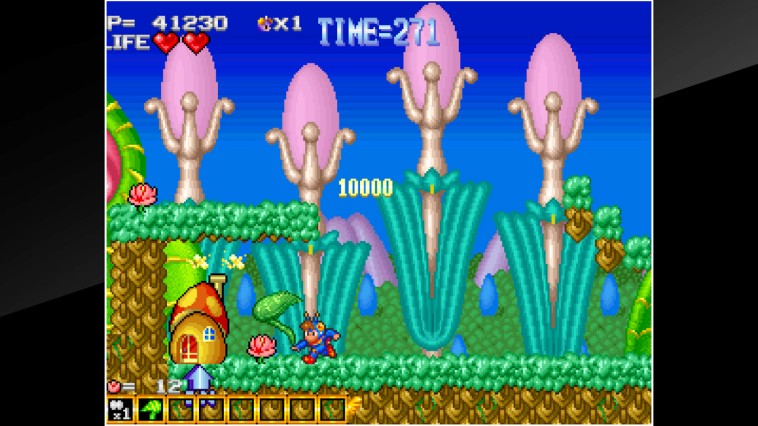 The graphics of Blue’s Journey also speak a lot about what Alpha Denshi (the original developer, port done by Hamster) was aiming for in terms of their market. There’s a lot of round shapes, bright but washed out colors and an incredibly cartoony but heroic feel to the entire thing. I loaded it up and immediately got the Adventure Island vibe, but with an effort to grab Bonk’s Adventure as well. It works, but it feels almost out of place on the NEO GEO. Sure, you can’t just keep releasing shooters and fighters all day long, but the NEO GEO made a pretty good name for itself as a slightly mature arcade machine and was successful in other, grittier titles (Sengoku, for example). To have something like this that wasn’t cute in a fanboy attracting way (Magical Drop) comes across like a desperate cash grab. The music is equally forgettable, as something that’s kind of jaunty and high pitched, like it would be heard in the game room of a pizza restaurant that also had giant animal mascots. I don’t want to name names, because, let’s be honest, I haven’t been to an establishment of that nature in several decades and they could have awesome DJs at this point.

I almost feel bad for Blue’s Journey. SNK wanted to try something different and called upon a fairly well respected team to make a game that was going to bring in a different type of audience. It has a lot of interesting pieces to it – the shapeshifting on the fly, the shop upgrades, the hilariously broken translation dialogues – but none of them fit together with each other. I was concerned that I was being too harsh on the game, and maybe it just didn’t age well, but even Famitsu gave it a 17 out of 40, which isn’t even a passing score back then. The one thing I can say is that it’s different, and different isn’t always the worst thing in the world. If you remember playing this game as a kid and loving it, I don’t know if I’d recommend going back and trying this port, simply because not everything is as good as it used to be. It only took two episodes of He-Man for me to realize that certain memories are best left as that. If you absolutely need to get every NEO GEO release onto your Switch, or you want to play a bizarre platformer, then, by all means, pick it up. Otherwise, just sit tight, I’m sure Nintendo will announce virtual console any day now…