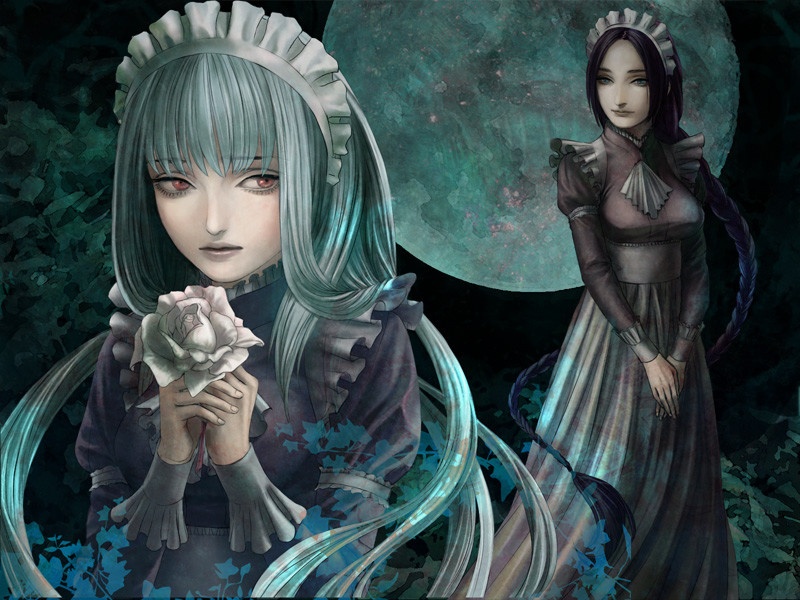 I’ve often heard The House in Fata Morgana spoken of in visual novel circles with a certain level of reverence. It’s put into the same grouping as a lot of the classics, like the Higurashi series, stuff by Type/Moon, and even other brain-benders like Cross Channel. Basically, I’ve been told for years that it’s a must play, and I took those urgings and promotions to heart when I finally sat down to play. Although I don’t totally agree with the hype for several reasons, I will say that it was quite the experience.

To set the stage, The House in Fata Morgana puts you in the role of the master of the house, who awakens with no memories whatsoever, and no real clue as to where you are or what your purpose is. The Maid, who doesn’t really get a title otherwise in the game, invites you on a tour of the manor in an effort to help restore your memories, but the journey isn’t quite what you’d expect. Far from looking at different heirlooms set throughout the House, you’re instead taken on a trip through time, to several different points in the centuries past and future, to see all the terrible, tragic events that have happened within the house and to its residents. The Maid believes that, upon understanding these moments, you will understand yourself and, from there, decide what will happen for the future. I really can’t dissect it more than that for fear of revealing too much of the plot.

That does make Fata Morgana a difficult title to review, because the entire premise of the game is the mystery and the thrilling, unsetting atmosphere. At the core of it all, The House in Fata Morgana is an excellent conceptual story, in a fully amassed sort of way, and I would absolutely read it as a standalone book. I think that this is another example of a “pure” visual novel, where there are some choices that affect a bit of how you perceive the plot but doesn’t necessarily change or deviate away from it too much. Fans who become wholly invested will certainly want to go back and replay some moments to see if they change, but, for the most part, casual readers (if you can really call investing more than 30 hours into something casual) will be quite satisfied by simply reading through one time, though, as we’ll get into in a moment, that may not really be an option. 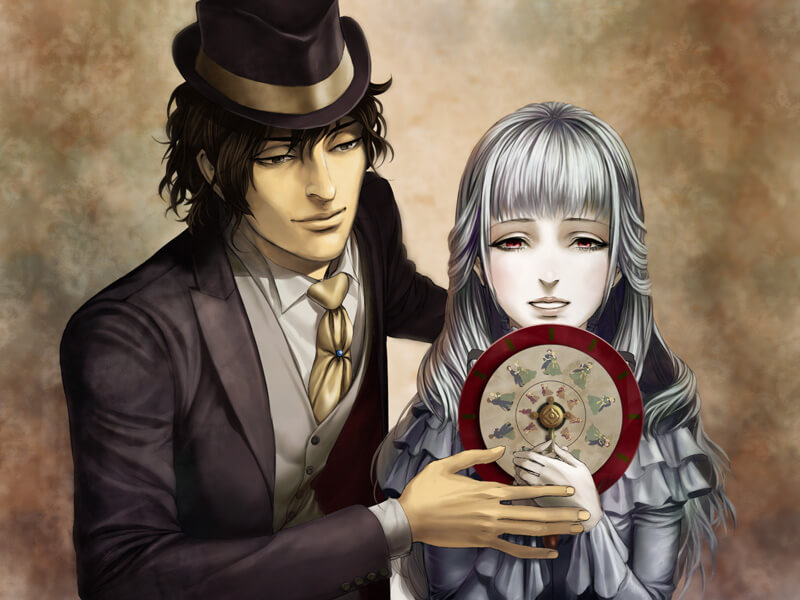 First and foremost, the overall story, while fantastic, is slightly marred by the way it’s broken up. The four doors that you explore represent the initial four chapters, which serve as a massive backdrop for everything after you “regain” your memory. Chapters, like levels, can be some of your favorites that get re-read multiple times or simply get rushed through in order to progress the story. There are two excellent chapters, one pretty good chapter and one, in my opinion, very dull, very expected chapter. Since The House in Fata Morgana’s big pull is the dark suspense and some seriously wild twists, having a chapter that was just “oh, yea, I figured that was the case” felt like a huge letdown. You can’t just have a book/movie/game be a constant series of high intensity moments, but everything moves in momentum and with a certain cadence. There was one chapter that I felt didn’t follow the proper delivery and setup, and, as result, it kind of took me out of the moment which the game had done such a great job of putting me into, at first.

The text is delivered in a good fashion and nice sized chunks. I was never staring at a wall of words that seemed insurmountable, and my screen time was rarely wasted with just a blip or a simple sound effect to fill the time. The very early setup for the game was kind of sparse, but, after the first door was opened, Fata Morgana really took off and kept going all the way to the end. That’s the secret to a great visual novel, is being able to deliver your story in a way that keeps the reader engaged. And what you read is something that, quite frankly, should not be read in large tracts as it is. Because, let’s be blunt, The House in Fata Morgana is DARK.

With games like Meakashi and Umineko, the tide of murder and horror was sometimes broken up with some off-brand humor, or chinks of light shining through that give you hope for what could happen in the future. The Maid, however, let’s you know from the beginning that you are about to see four tales of woe, and she is severely underselling the depravity and sadness you are about to engage. There were moments when I seriously had to work on compartmentalization so that I could remind myself this is only a game, not a true tale, but that’s the messed up thing about visual novels, is that they use multiple elements to sell the sorrow. This wasn’t just me reading a police report about something that happened, this was watching, helplessly, as awful things played themselves out in the echoes of history in real time. 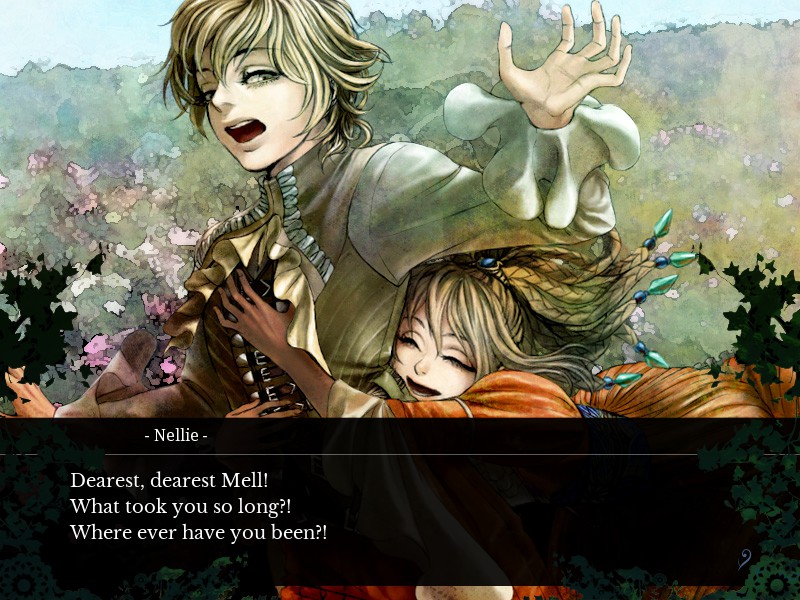 And yes, the audio of The House in Fata Morgana plays a huge role in this. There is a sweeping, deeply disturbing soundtrack that helps encapsulate everything, and I was stunned at how well the music seemed to match the periods in which I was traveling. You wouldn’t think of a huge shift from the 1600s to the 1700s, but I could feel the change in the way the world was, and how life continued (or didn’t continue) in Fata Morgana. There’s even a good deal of sung soundtrack in a variety of languages. I’m pretty sure the opening track, when I’m still trying to get my bearings and awake from a terrible nightmare, was done in German, which felt so incredibly fitting. My only gripe is how loud it could be, so balancing out your audio ASAP will keep you from suddenly getting overpowered and turned off from the experience. If you’re not sure, find the track Portrait of White online, it’s one of the best pieces and I think really sets the bar for the whole game.

Lastly, the artwork. Moving from blurred watercolors that implied hazy memories to surprisingly sharp and crisp designs of a wild outdoors, The House in Fata Morgana uses the medium of sight to really push you into the final dimension of accepting this game. I was actually pretty put off by the sprites of the characters at first, as they were quite angular and Victorian, until it clicked with me how utterly appropriate it all was. Victorian horror is the quintessential setting of misbegotten characters, and there is no happiness, no light that comes with those who reside and have resided here. When you look at them all, from poor Giselle to misunderstood Yukimasa, you really drink in their pain and their longings. I don’t think I want portraits of them hung anywhere in my home, but they are identifiable, and there’s no doubt when you see a character that they’re from Fata Morgana.

This one was an exhausting game. It was an incredible journey, and told so much about betrayal, forgiveness, hate and memory. There were a lot of surprises, save for the “non surprise” that I mentioned earlier. The House in Fata Morgana deserves all the praise it’s given, but I simply couldn’t imagine playing another game in the series. It was so taxing, and such an investment. Much like Umineko, compounding so much into a single entry leaves the player spent, and secretly glad they don’t have a sequel to chase up…yet. There are sequels, but they haven’t yet been translated (which, by the way, excellent localization by MangaGamer). When they arrive, I’ll have to take a long, hard look in the mirror and decide if I’m ready to go back. Until then, I think I’ll give my family a call, make sure they know I love them.