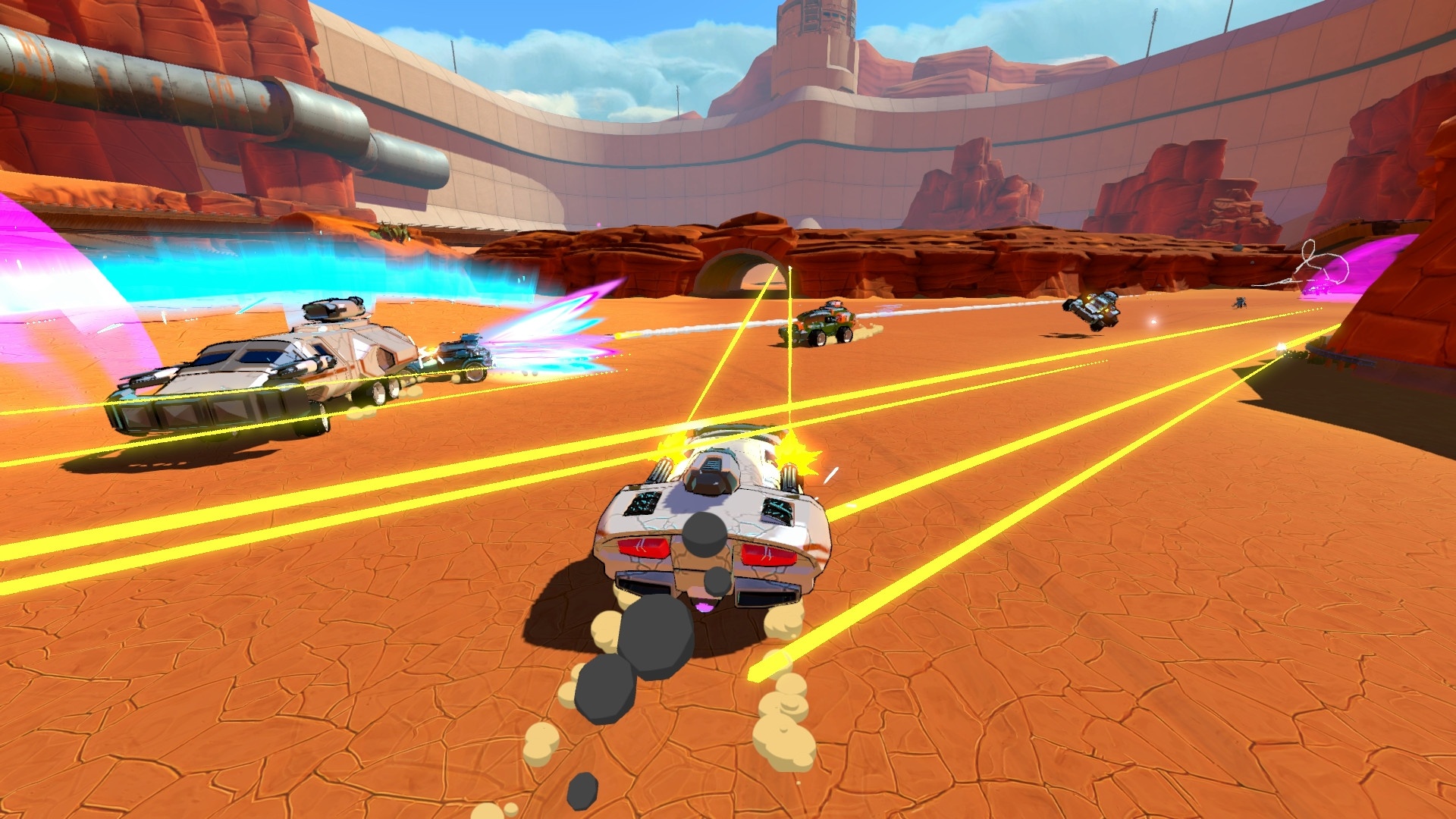 Ever wondered what Mad Max mashed up with Rocket League in the form of a 1980s cartoon series would look like? Probably not, but if you can imagine that, you would have a good idea of the premise of Auto Age: Standoff. The game, from developers Phantom Compass, is set in a post-apocalyptic near future where much of civilization as we know it has collapsed. Gangs of motorised bandits and vigilantes dominate the landscape and arena battles between hi-tech armoured cars take place in the Dead Zone.

The lore and backstory of the game is laid out in the tutorial in which you play as Val Vega, a courier called to the Dead Zone by the mysterious AI persona Saige. You are quickly drawn into a conflict with Dark Jaw, who will remind those old enough of 80s cartoon villains like Skeletor, and through a series of mini missions, the player will try out different vehicle types and be introduced to the controls and combat of the game.

That is it though as far as both the story and the single player campaign go. This is a shame as the story was engaging and very much reminiscent of a pilot episode of an action animation. The voice acting was also spot on for the cartoon genre and it very much feels like there is more to come. Hopefully, there will be in the promised future content updates. 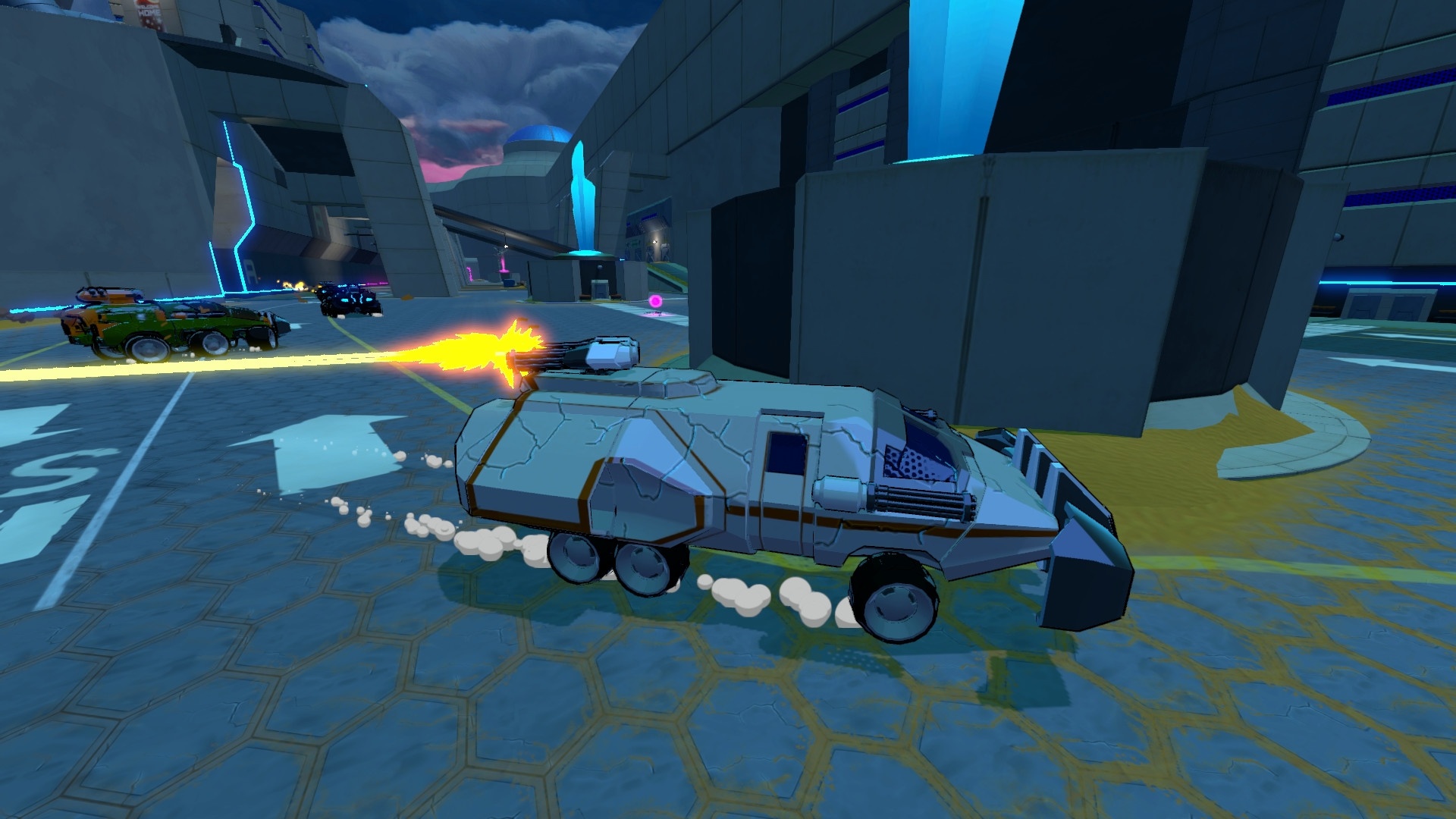 Beyond the tutorial, the game heavily targets multiplayer online battles. There are deathmatch modes, both team-based and free for all, with points targets or time limits to determine the winner. These take place over four arenas with Eagle’s Nest also used for a Point Capture mode. Matches are usually quite short, which suits the arcade style and fast pace of the game. ‘Bots’ can be inserted into matches to even out team numbers so there is never long to wait for a match to start. The quick rotation of short matches can get repetitive after a while, however, and this is where a more in-depth story mode would have been welcome.

There are quite a few vehicle options available including light but fast vehicles and slower but more powerful ones. The attack towers are a fun addition for variety – tall, imposing machines with heavy firepower, they are a blast to pilot and a challenge to compete against. There is the option to experiment with different ‘loadouts’ (weapon and utility combinations) on each vehicle with over 30 different options to choose from. The quick nature of the matches means heavy artillery is much more useful than repair kits, however. The arenas themselves are well-designed and each one has a unique look and feel. There are plenty of tunnels and obstacles that can be used tactically as to assist your attack or defence. There are also plenty of ramps and jumps around to help you make the most of the air time options.

The vehicles handle very much like remote controlled toys. This allows for sharp handbrake turns and big ‘air time’ jumps during which you can rotate the car to be in the best position to take out your opponents. This makes it a game crying out for controllers, which are partially supported – a keyboard and mouse will still be needed to navigate menus. I used the Steam controller and found that despite only partial support, it worked well. I did encounter one major issue, however, when the configuration changed without warning mid-match. Suddenly the right trigger no longer accelerated the car and became my primary weapon button instead. I quit the game and reset the controls to default but the issue persisted. The keyboard and mouse controls are manageable but I would much prefer a stable controller set up and I hope that full controller support, both for driving/combat and navigating the menus, is added soon.

Visually, the game stays true to its 1980s classic adventure cartoon style throughout. The menus, cutscenes, and in-game graphics all maintain a look and feel that will be familiar to fans of the old Masters of the Universe and Transformers cartoon series. The car models and laser, smoke trail, and explosion animations all pay homage to those classics as well. This nostalgia trip is definitely a major attraction of the game and is supported by an era-appropriate soundtrack and transition music. 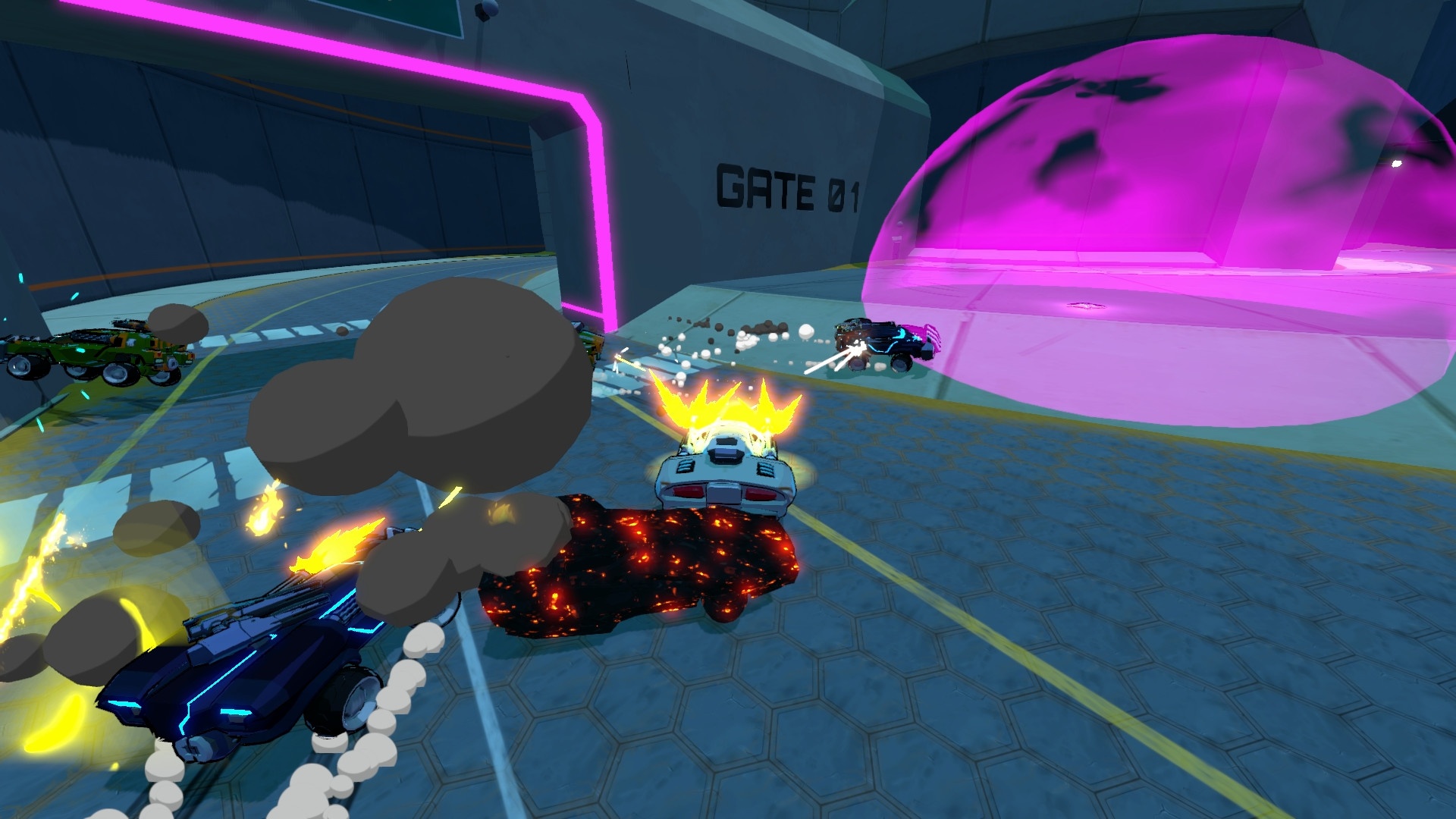 I did experience a few frame-rate drops when the action got intense, however. While these did not cause me to take a missile out of nowhere, they did take away from the immersive fun of the ensuing battle. The online matches are generally stable with no major lag or drops from the game encountered.

What really effects the game in its current initial release state is the lack of content. As mentioned above, the story and single player mode are both restricted to the 15-minute tutorial. For multiplayer, there are only a handful of different maps and four game modes, which quickly leads to the game getting repetitive. There are content updates promised before the end of the year but there are few details on what those might be.

Auto Age: Standoff is a fun game combining arcade driving action with shoot-em-up mechanics in a unique animated style. However, in its current state the game lacks depth. It relies heavily on its gameplay and the lure of online multiplayer battles, which means it is also relying on sufficient numbers of players sticking with the game on a regular basis. More content and variety through a better-developed story and a greater range of maps and matches would help that happen, but for now we are left with a good idea that feels as though it has not quite been realised.