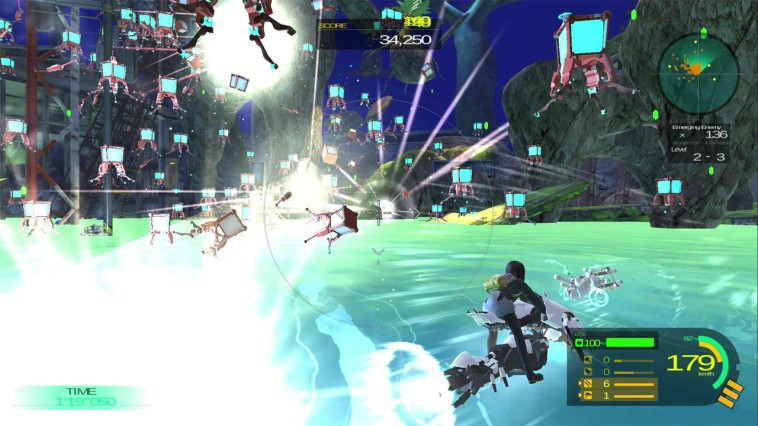 There is no plot to speak of. None. I usually enjoy games that do away with the setup of some lengthy storyline, but I can usually extrapolate a bit of plot just from the environment. If I’m in a spaceship and it’s a NEO GEO game, that probably means aliens invaded or I’m the alien or I hate the sky, all are possible. But Sky Ride starts you first with a semi-compelling shot of a woman in a garage working on what looks like a cool motorcycle/wasp hybrid. And then the game starts. That photo is the loading screen, and now you’re on your bike, ready for a Sky Ride.

Let’s start breaking it down immediately. Sky Ride, in my opinion, implies a large area or possibly infinite space to ride around. You are absolutely confined to a small arena. The name also feels like it could or should be something explorative and atmospheric. In actuality, it’s more of an arcade shooter in 3D with huge waves of enemies coming at you. At this point, you start to feel like something might be amiss, but you let it go. After all, the icon was pretty dope and it seems like big companies are having problems with good Switch icons. Since this one was well done, Sky Ride might actually be a pretty interesting setup. 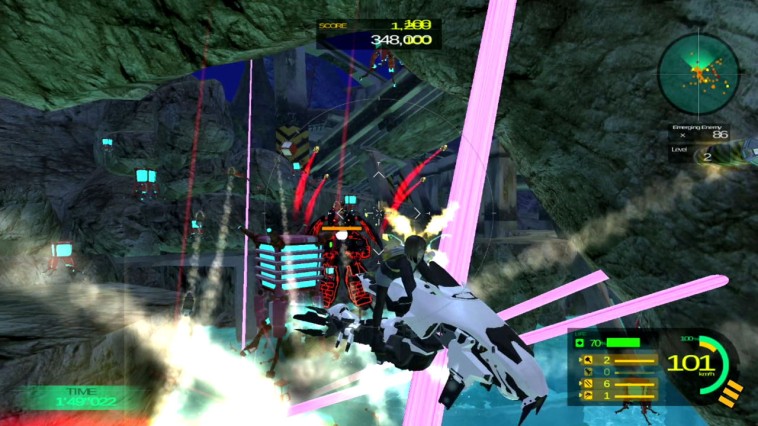 What happens next is really weird to try and explain. You have a series of weapons all over your bike, and none of them appear to be limited, just some can fire at better frequencies than others. There are enemies in the sky and enemies in the water. You need to shoot as many as you can. The left joystick controls acceleration and turning, while the right controls ascent and descent, as well as looking around. The enemies jump around wildly in the air, the water ones swim after you, and…that’s really it. You shoot them. Some of them drop green gems that help you get a better score. You blow up after being hit enough. The weirdness is that I feel like I’m leaving something out, but I keep picking up the game and double checking, and, no, that’s it. It’s an arcade shooter than I can’t imagine being in any arcade.

I ended up just sitting in one place and spinning around with my gatling gun, which never ran out of power and could aim practically everywhere. This got me through some of the initial waves, but the larger bots who showed up to murder me quickly made me rethink my strategy. I did alright, but it wasn’t even close to the high scores set by the developers, who clearly understand the way to play better than I could. It’s something where the execution fails so hard on my end that I have to wonder if it’s a user issue and not the design. I mean, a couple hours and tens of tries later, I’m still D ranked. I know I’m not great, but am I really that bad at Sky Ride?

The sprites are statically ugly. When you first look at the bike and your character, you think that it has a cool, anime-esque approach, but then you realize it never changes how it looks. It just sits there and floats through the air wherever you command it to go. The weapons seems to just appear and disappear with no animation or explanation. My rider couldn’t look more blase about being swarmed by unexplained robots, who don’t shoot but just jump all over you. They look like bacteriophage without so many legs, so I felt like this could have been some kind of analogy to health care? When the “boss” ships arrive, they’re large and imposing, but there isn’t anything necessarily unique about them. It’s like if I saw Macross and Ghost in the Shell on two screens at the same time and was asked to draw a fusion from memory a week later. Uninspired, I guess. The environment of the arena is cool, I liked the feel of the girders and the broken street, but there’s nothing to explain it or justify it, and, when my bike got stuck in said girder, I lost my fascination with them immediately. 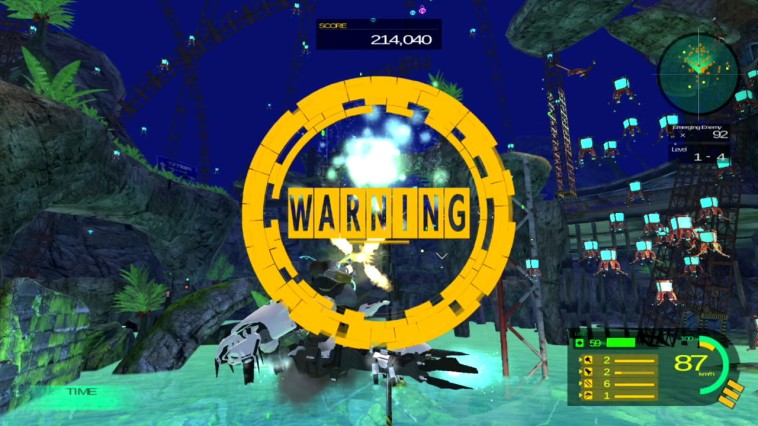 The soundtrack for Sky Ride is decent, at least. It’s a driving, dynamic little piece with some slightly indiscernible vocals peppered throughout. It reminds me a little bit of how JPOP and Hip Hop were fused back in the mid 2000s for nearly every anime opening, so it was slightly nostalgic without being actually familiar. That’s not enough to carry the game, but it stands out.

Sky Ride has been unfairly compared to Vroom in the Night Sky, because neither game has enough similarities to be in the same vein. Vroom has quite a few levels and upgrades if you were actually invested in the game. Sky Ride has one level, no upgrades, but could attract the right kind of shooter clientele. These are two titles that are poorly executed but meant for different crowds entirely. I can’t recommend Sky Ride for anyone in particular, but you should probably check out some gameplay video before making that call yourself. Personally, I’d rather go back and play a bit more 2048 before taking this out for another spin.