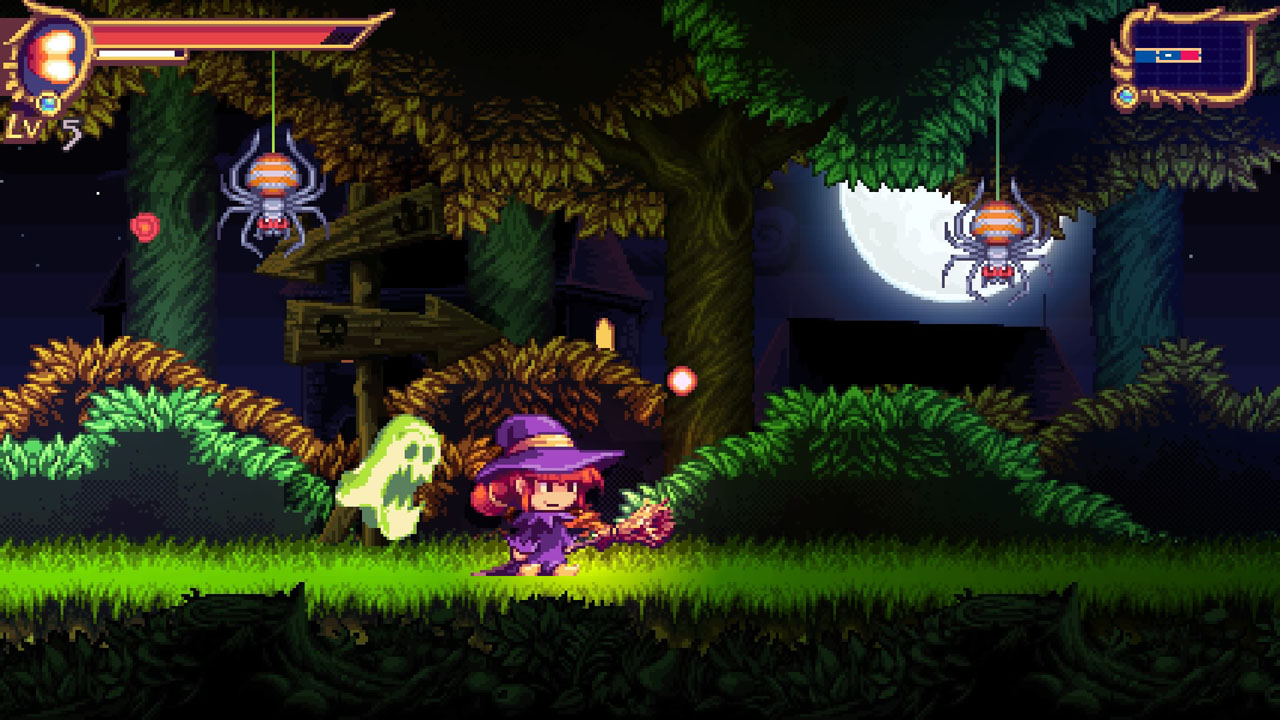 Mystik Belle is a Retro-inspired, Fantasy-laden Platformer from WayForward Technologies that released for the PS4 on October 3rd, 2017. In partnership with Last Dimension, WayForward converted what was initially a Steam-exclusive title to be available to console gamers. The star of the tale is Belle MacFae, a bold witch-in-training at the Hagmore School of Witchcraft, and the game transports players into a world of magic potions, colorful 2D landscapes, and seemingly countless rooms full of hazards. But can this cute, RPG-style Platformer keep up with other, similar titles?

Mystik Belle is an adorable, incredibly addictive Platformer that has a lot to offer fans of the genre, Retro gamers, and Fantasy enthusiasts alike. The central theme and storyline feel very Harry Potter-esque, but that familiarity works in Mystik’s favor without being overly redundant or similar to the Potterverse world. The story begins with Belle taking the fall for someone else’s mistake, which resulted in an unusual potion being destroyed. Now, she finds herself on the hook for replacing the missing pieces, which triggers a scavenger hunt like ordeal of exploration and danger in the vast, labyrinthine school. The environments are colorful and bold, and the entire world within Mystik Belle reminded me of the old Addams Family titles on the Nintendo and Sega console systems. Even the music is period-appropriate for an Adventure in the early ‘90s, and that huge nostalgic appeal just made me happier to be exploring Hagmore and its occupants. 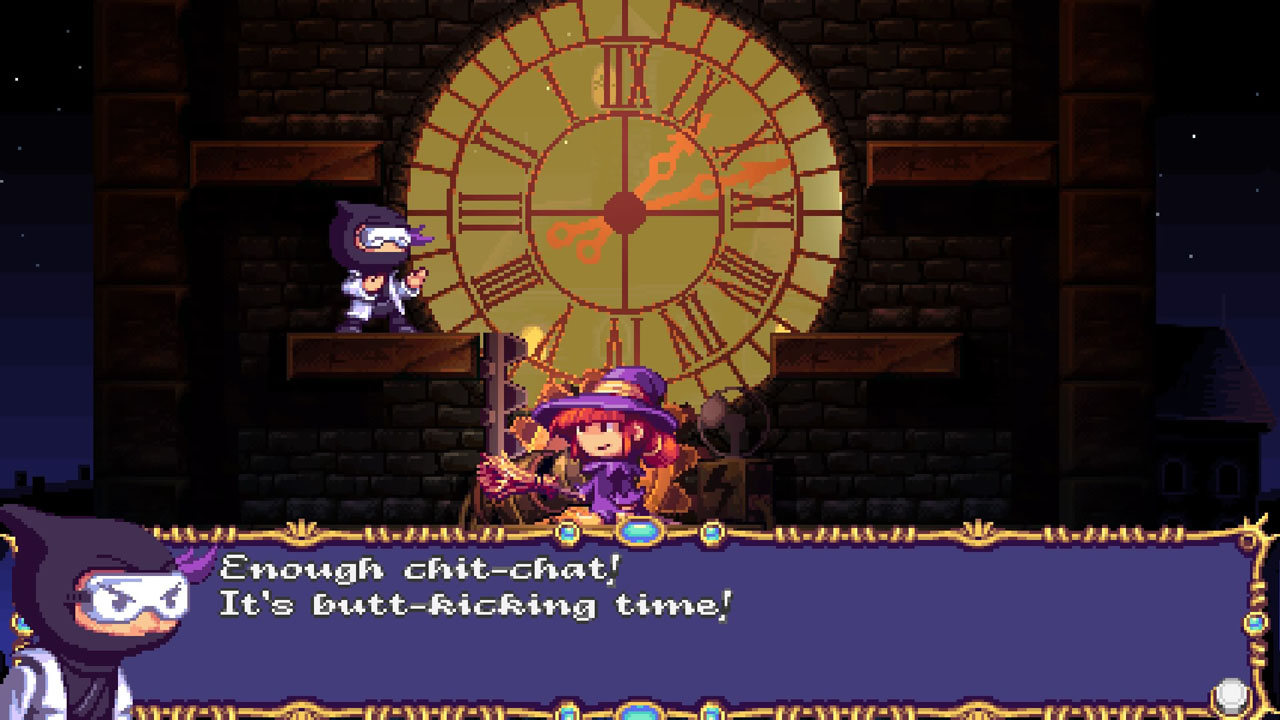 One of my favorite aspects of Mystik Belle is the object-oriented quest to find stuff, combine them, and gain access to new areas in this manner. It’s very Point-&-Click style Adventure, which I love, and it added more depth to what could have been a reasonably run-of-the-mill Platformer. The objects themselves are often mystical, but there’s also plenty of mundane stuff scattered around that have strange combinations. Still, these mini-puzzles weren’t frustrating or overly demanding, and the cleverness of solving one of those hurdles made advancing to a new part of the school that much more enjoyable. The enemies differ from room to room, with only a little overlap, and there’s something to be said for a giant Grim Reaper chasing after you, serving as a hall monitor.

As I mentioned previously, the music is reminiscent of gaming yesteryear, but it pairs splendidly with the 2D graphics. There is virtually no interface to speak of, save for the minimal inventory system. But it’s intuitive and easy to use. Better yet, Hagmore conveniently offers magical chests for loot storage, which enables the player to stash and retrieve items from any chest located on the grounds. There are also teleportation mirrors for fast-travel, something that becomes increasingly helpful as you unlock more and more rooms inside and outside the school. 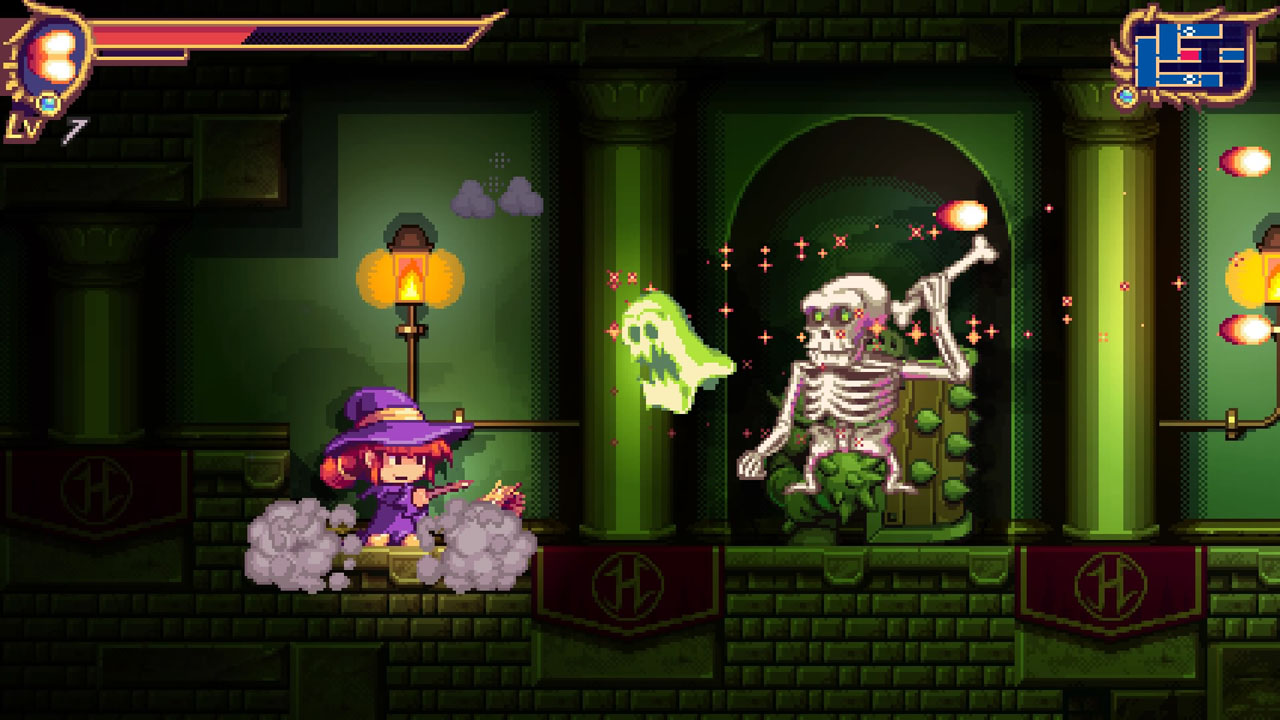 The dialog is splendidly cheeky at times, and not too abundant to creep into tedious territory. Mystik Belle is a game willing to laugh at itself, and the genre, which is refreshing. There are also RPG elements as Belle levels up, enabling her to gain new powers, increase her strength, and unlock additional content. Plus, there are secrets located on the grounds that allegedly allow you to discover “the story’s true ending,” which is something I have yet to manage to do (as I won’t consult a walk-through until I’m desperate). That additional ending and bonus content lends to the replay value, above and beyond the pure joy of casting fireballs at skeletons and bashing worms in the face with a broom.

Ultimately, Mystik Belle succeeds at what it set out to do: Provide a fun, challenging Platformer that is rewarding and fun as you progress through new areas, paired with a cute story, interesting other characters, and object-oriented puzzle elements. The overall atmosphere is likely to be familiar to anyone that’s a fan of classic Fantasy tropes and Harry Potter-style concepts, but there’s enough variety here to make it a worthwhile world to explore as a stand-alone experience. Belle MacFae is a fun protagonist, and she lends well to the slowly but surely increasing amount of female heroes in the gaming sphere. There is a bit of crude humor present, but for the most part, Mystik Belle is a Family-Friendly experience that is nonlinear, magical, and fun for both kids and adults.