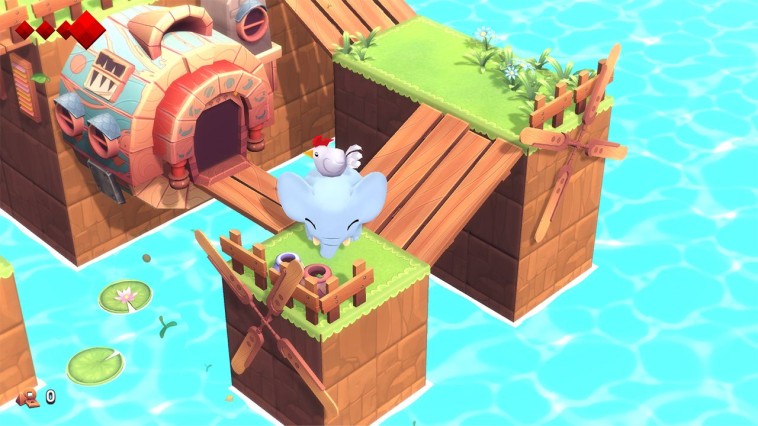 People often use the expression “through the eyes of a child” to describe how something can be full of wonder, mystery or even awe if viewed with innocent vantage, taking in something for the first time. It’s hard, as we get older, to put ourselves into the shoes of little ones and take, at face value, how things might appear when they simply cannot understand deeper meanings or more complex setups. I don’t think I’ve ever heard the phrase used in a derogatory sense, but I know that people, especially media consumers, often pride themselves on being able to look deeper and see more than meets the eye in their chosen fanatical product. So it’s refreshing and, honestly, amazing, that a game can successfully put a player in the perspective of someone who doesn’t know better and, frankly, doesn’t have to.

Yono and the Celestial Elephants is an incredible tale about Yono, a young elephant, who is sent down to the planet (Earth?) in order to help out people in times of a coming disaster. Historically, Elephants are beings from the stars that support the terrestrial ones with both innovation and comfort. Yono is the youngest elephant so far, and the seventh in the recorded history, to appear. Some view it as a good omen, some as bad, and quite a few are just impressed to have seen an elephant in their lifetime. Yono, ready to help even if he doesn’t understand why, sets out, befriends several people, and does his best to help humans, zombies and living machinations have harmonious lives, and also stop some really bad stuff that people are planning to  do.

The first thing that may draw your attention is how cute this entire game is. From the very first moment that you lay eyes on Yono, this game is so cute it borders on painful. Far from being the overly anime cute that has become popular, and not in the same vein as a child’s game, Yono’s art style matches the elephant himself. Objects are very soft and round in design, with even the swords wielded by enemies looking like they might be blunted. The environments, from deep woods to underground caverns and even a literal necropolis, aren’t scary, but rather curious and meant to pique interest rather than instil fear. Yono himself is the cutest mascot I’ve seen in awhile, as he gallops about the screen, moving in a pretty good imitation of an elephant’s gait, and skidding to a stop with a slight bumble but nothing that could hurt anyone. It’s cute. If you really can’t stand cute, bail out now, because things only get cuter. 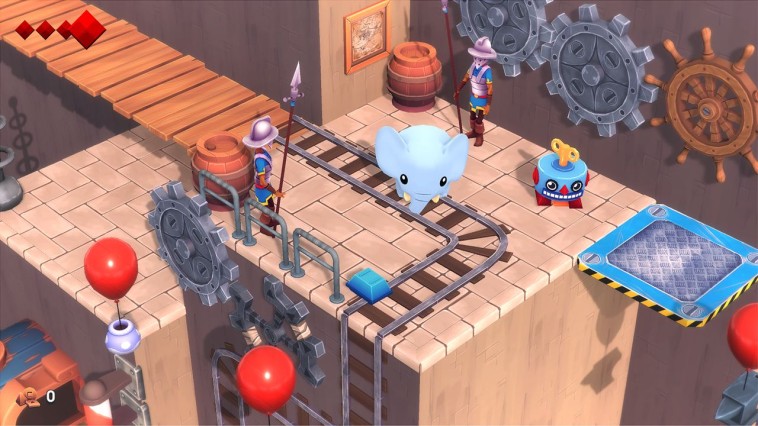 Yono’s primary goal in the game is helping people, which comes in the form of fetch quests, puzzle solvings and occasionally light bad guy fighting. Yono can headbutt and also use his trunk as both a wind and water blower, all three of which are used in varying degrees of success. He moves slower when his trunk is full of water, and takes a moment to gain traction before sliding blocks into place to either trigger panels or reveal hidden secrets. The puzzles are never overly complex, but are naturally hindered by either the environment (snakes tend to be hazardous) or the fact that Yono is, well, an elephant, and doesn’t move so quickly.

The fetch quests are numerous and can be a bit tiring to deal with at times. Again, Yono, even when trying to run, is slow, and moving back and forth between the same screens to deliver roses, fetch information or lead a dog home gets repetitive. Not to mention that, should you accidentally leave the area, the item you’re retrieving will vanish and reappear back where it spawned. This is frustrating in and of itself, but that frustration can be alleviated by taking said quest item and hurling it in the river. It will respawn when you leave the room, but, for a moment, it’s cathartic. And being able to pick up and carry some animals on your head is another incredibly cute moment that can wash away bad tithings, at least for a moment.

One thing that’s fascinating about Yono is how deep and complex the lore of the game is. You quickly find out that the different species of the land live in different cities for surprisingly political and important reasons. The living robots have a township that is basically living in destitute because the human kingdom so heavily levies tariffs against them, but they have an inherent nature of taking care of humans, so they don’t mind. The undead cemetery city is very open and honest about their views of death and infinity and conveys them to Yono on multiple occasions. It’s crazy how many heavy topics and realistic ideas are dropped onto Yono, who then has to process and analyze them in an unbiased, aloof nature without being cold. I can’t deal with grappling with mortality as an adult human but here’s a space pachyderm, taking it all in stride. 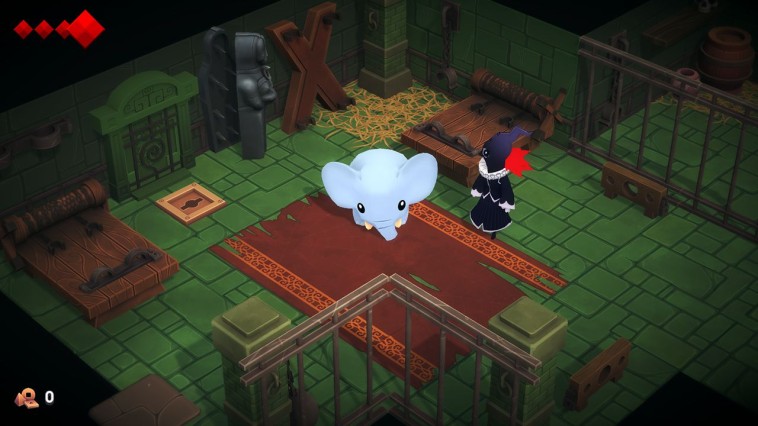 Additionally, if the ideas of Yono intrigue you, there are literal tomes of information that detail the history of the other elephants’ visits that have been scattered, letter by letter, across the lands. Collecting and sorting all of these letter (the sorting is automatic, thank God) takes a lot of time, but it shows a fascinating glimpse into the fully formed creation of the world of Yono. As the main storyline of the game itself is rather short (and the world is small, all things considered), you almost owe it to yourself to seek out all the letters and read/experience more about what brought this land to where it is today.

Audio-wise, Yono does have a very sweet and appropriate soundtrack, but I ended up having to mute the volume every time I was in proximity to multiple people I had to talk to. Each being lets out some kind of “noise” to simulate the beginning of conversation, and I straight up started to hate the yelps that human beings made when I engaged them. The zombies and robots were ok, but holy crap, the humans always sounded like they were shrieking in pain or fear at the sight of an elephant. If there’s any way to toggle off just those sound effects, I would be so incredibly content with the overall soundscape.

I started into Yono and the Celestial Elephants with the expectation of something cute and endearing, and I was stunned with the weight and the contemplation that it left me with. The idea of a game being a philosophical vessel isn’t new, but I’ve never had it done in such a way that actually caught me off guard and caused me to think. It’s not a long investment, and it’s not a Switch exclusive, but I feel that Yono deserves a place in the hearts and minds of many gamers who are looking for something to sweep them off their feet. Come for the adorability, stay for the deeper questions, and leave satisfied and burning with new, stronger questions that could honestly enrich your life with a bit of prodding. It’s said the elephants come down to help the people in their time of need: I say Yono is exactly on time.