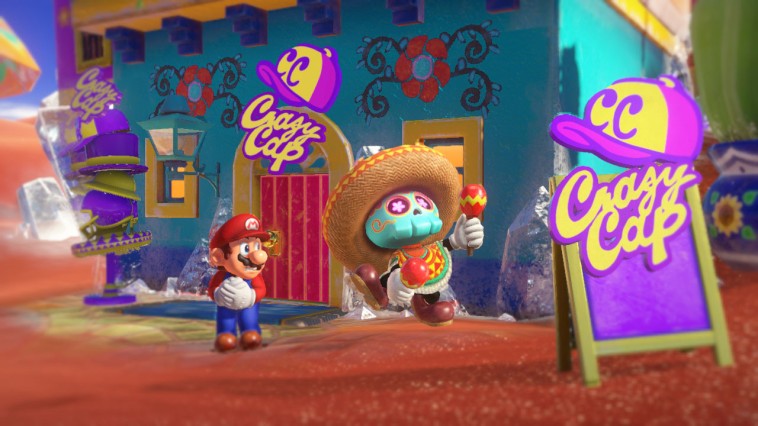 There is a dangerous level of hype in the air. As of the publication of this article, less than 24 hours remain until the most anticipated Switch title to date lands, seeking to unseat Breath of the Wild as the Switch game of the year. People have been counting weeks, days and hours to the drop, and the time is finally at hand. Which naturally begs the question: does Mario Odyssey meet expectations? Is this really the true blue successor to the Mario throne? In a word: undoubtedly.

The story of Mario Odyssey is one as old as time. Bowser has kidnapped Princess Peach, and Mario would like to save her, as he’s been looking for a moment’s respite with her for about 30 years or so. Bowser, to his credit, is actively working towards his wedding with Peach instead of merely keeping her captive, as he traverses the globe to find the perfect wedding elements (dress, food, ring) and is actively successful in every endeavor. Mario, far from being a slouch, is chasing after Bowser as fast as he can in a refurbished dirigible, named the Odyssey, which needs a bit of TLC to get back to its former glory. Mario is aided by a talking hat named Cappy, who is on a rescue mission all his own: his sister is the tiara (named Tiara, oddly) Bowser has affixed to Peach, so the duo have mutual stake in the mission. The journey ahead is uncertain, long and dangerous, but Mario has never, and will never, back down from the challenge.

Mario Odyssey is a return to form in terms of the 3D Mario games that truly feel more open ended and exploratory than others (3D World, although fun, was pretty linear). In lieu of having stages within worlds, Mario is turned loose on a variety of lands and has only one real goal: get Power Moons. The Power Moons are the collectible centerpieces of this game, being the only way to power up the Odyssey, and a certain number are needed to progress to the next world. There’s no easy way to try and describe the sheer number of Moons in each level, but the scope of what you can find in almost any level borders on daunting. My goal in playing for this review was to do only light exploration and primarily make sure that I could get through the game. Having said that, I was able to get nearly forty Moons in one area alone, and broke triple digits before I was even close to cornering Bowser. If you’re into the “search and discover” motif, then Mario Odyssey has got you covered. There’s a significantly easier way to gain Power Moons once you reach post game, though that’s a story for a different paragraph. 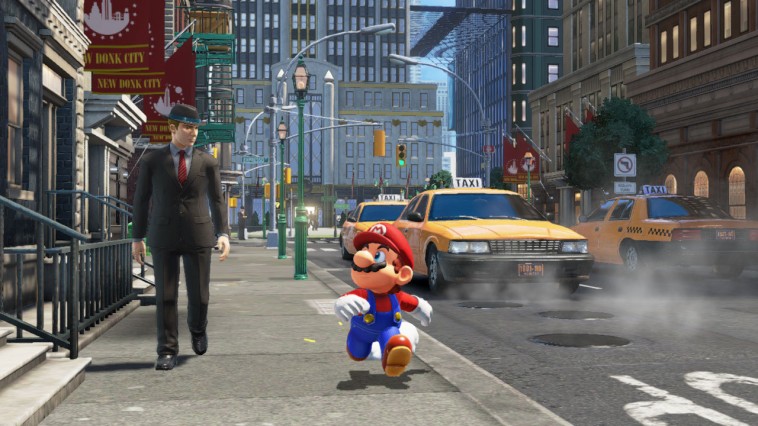 The movements are as you might expect: Mario can run, jump, backflip and somersault with the best of them, but Cappy adds a ton of new facets to things. Besides being a ranged attack, Cappy is a flingable platform that can be used to bounce across small gaps and, on occasion, reach higher ledges. If you’d like, two players can work together for a really cool exercise in teamwork, with one being an autonomous Cappy and the other being a hatless Mario. A bit of a heads up: I hope you like Joy Cons. Mario Odyssey has plenty of options to play with Pro Controllers and such, but two, free Joy Cons are the only way to fly. Mario has a ton of additional actions that can be sped up and done better strictly when holding the two Joy Cons and utilizing motion control. Climb faster, special rolling attacks, even the action of hurling Cappy is more accurate and fun with the right JoyCon flick. I enjoyed the experience a ton, and I like Nintendo encouraging players to use the controllers they should already own to maximize the way the game was intended to be played. Having said that, I’m sure there’ll be plenty of people mad about it online, so let’s brace for those reviews.

The Cappy possession mechanic isn’t as grand as the commercials would make it out to be. The impression I got from the trailers made it seem like I would be taking over literally everything in my sight, but probably half or less of the enemies in each world was affected. I didn’t get to take over a human being, I didn’t become a taxi, and Spineys were immune to my hatness. BUT. When I did grab someone, the effect was glorious. Of course, the Bullet Bills flew amazingly, and you can become a T-Rex within the first 15 minutes of the game. Goombas and Koopa Troopas wore my mustache with pride. I became a rock, a tree and a slab of meat. There’s a bird (who my kids lovingly named Master Tweety) that I wish I could bring to other worlds and use because he was PHENOMENAL. And every possession plays an important part in some way: be it revealing a Power Moon or being the only way to finish a boss battle, Cappy gets the right amount of play and investment in this game. It’s refreshing for a gimmick to get the balance and necessity it deserves without becoming a hammy attempt to justify a game over a cool idea. And the final use of Cappy for the main game is genius and caused three people in the room to exclaim “AWESOME” at the same time.

Mario Odyssey could not look more gorgeous. Every world is tailor made to a concept and pays slight homage to the games that came before it, as well as what could be. It feels almost untrue to use the word breathtaking, but I audibly murmured and felt my eyes widen upon the revelation of some areas. If it’s meant to be dark, Odyssey goes full black. If there’s water, you’re up to your goddamn eyeballs and can still maintain. I’d say the only stage that didn’t quite meet my expectations was New Donk City, but I think that’s because I somehow got the idea of Grand Theft Mario locked in my mind. Strangely, every other stage lives up to and far surpasses expectations, with Bowser’s Castle being, hands down, the greatest interpretation of the dinosaur’s stomping grounds to date. 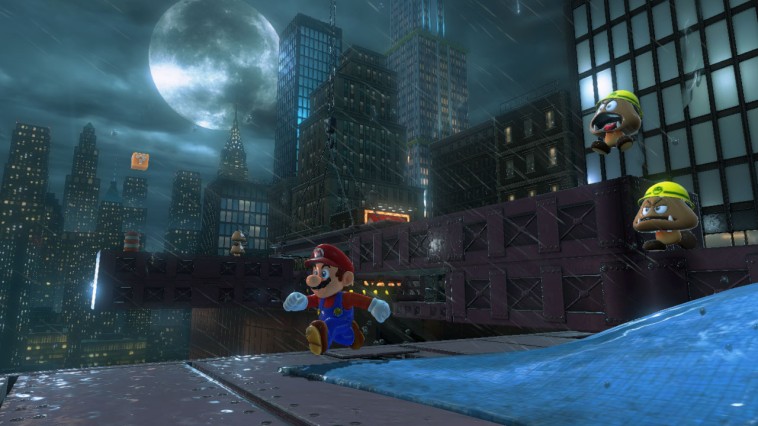 Musically, you’re dealing with one of the most robust soundtracks to date for a Mario game. We’ve all heard Jump Up, Super Star! by now, and, while that’s the most singable tune on the soundtrack, it’s hardly the most memorable. You’re wrapped in a Mario atmosphere everywhere you go, with the game choosing to change from driving and upbeat to mellow and cool when it meets where you are. You may have already seen there are “retro” mini stages that crop up within some of the levels. When you enter these 8-bit callbacks, the music changes to chiptune versions of the tune wherever you are. The adventurous and dynamic music of Cascade Kingdom (where you find the T-Rex) blends seamlessly into a chripy and pitched oldschool sound as you enter and exit the retro level. And, when all’s said and done, you have plenty of areas and opportunities to listen and choose the tracks you love best to enjoy at a moment’s notice.

Lastly, and most importantly, Mario Odyssey is made by longtime Mario supporters for longtime Mario fans. I can’t begin to list off all of the callbacks and references that crop up in the game, but, if you’ve played even ONE other Mario game, you’ll see something in here you recognize. There’s tons of homage to Mario 64 and Sunshine, but even the old 2D games get nods and appreciation. Besides the costumes, there are missions, designs and mini games that get lifted straight out of the classics, albeit with a little polish and shine to bring them into Odyssey. It felt like I was coming home from a long, long trip abroad and found my home had been decorated by loved ones with photos of great vacations, plus tickets to go enjoy them again now. I was compelled to keep playing and keep going because I wanted to find everything that had been put into this game. Even now I’m struggling to find balance between what I want to write and what I should write. Though I’m technically allowed to spoil parts of the game in my review, I simply can’t bring myself to do it because everyone, and I mean everyone, deserves a chance at wide-eyed discovery.

Sometimes reviewing games is more editing than writing. You have to go back and find a better way to twist something, justify your choice, give credence to harsh critique and find one positive note so that it’s not all bad news. This is just the opposite. I feel like I’m struggling to find shortcomings in Mario Odyssey so I don’t sound overly gushy and zealous, but it’s honestly the best Mario game I’ve played since I was a child. I can’t stop playing. I’ve beaten the game and I’m still finding more Power Moons, working on faster times (thanks for an online leaderboard for certain missions, Nintendo!) and generally having fun. I have a stack of photos to share with others the second I’m legally allowed to, and I want to flail online about this game with everyone else. Mario Odyssey is the cure for cynicism that I needed after a long day of work and an even longer year of work. Mario Odyssey is so good that it’ll be part of Netflix’s analysis on why Stranger Things season 2 debuted so weakly. Mario Odyssey is so good I want to see Fred Savage’s younger brother play this against a kid wearing a Power Glove. If you have a Switch, you need to get this game. If you had any love in your heart for Mario as a child, as an adult, as a person who stopped playing games two decades ago because you “outgrew them,” this is the game for you. There is nothing on Earth or in development that stops me from prematurely giving Mario Odyssey my vote for Game of the Year, and I say that with unshakable, unwavering confidence.