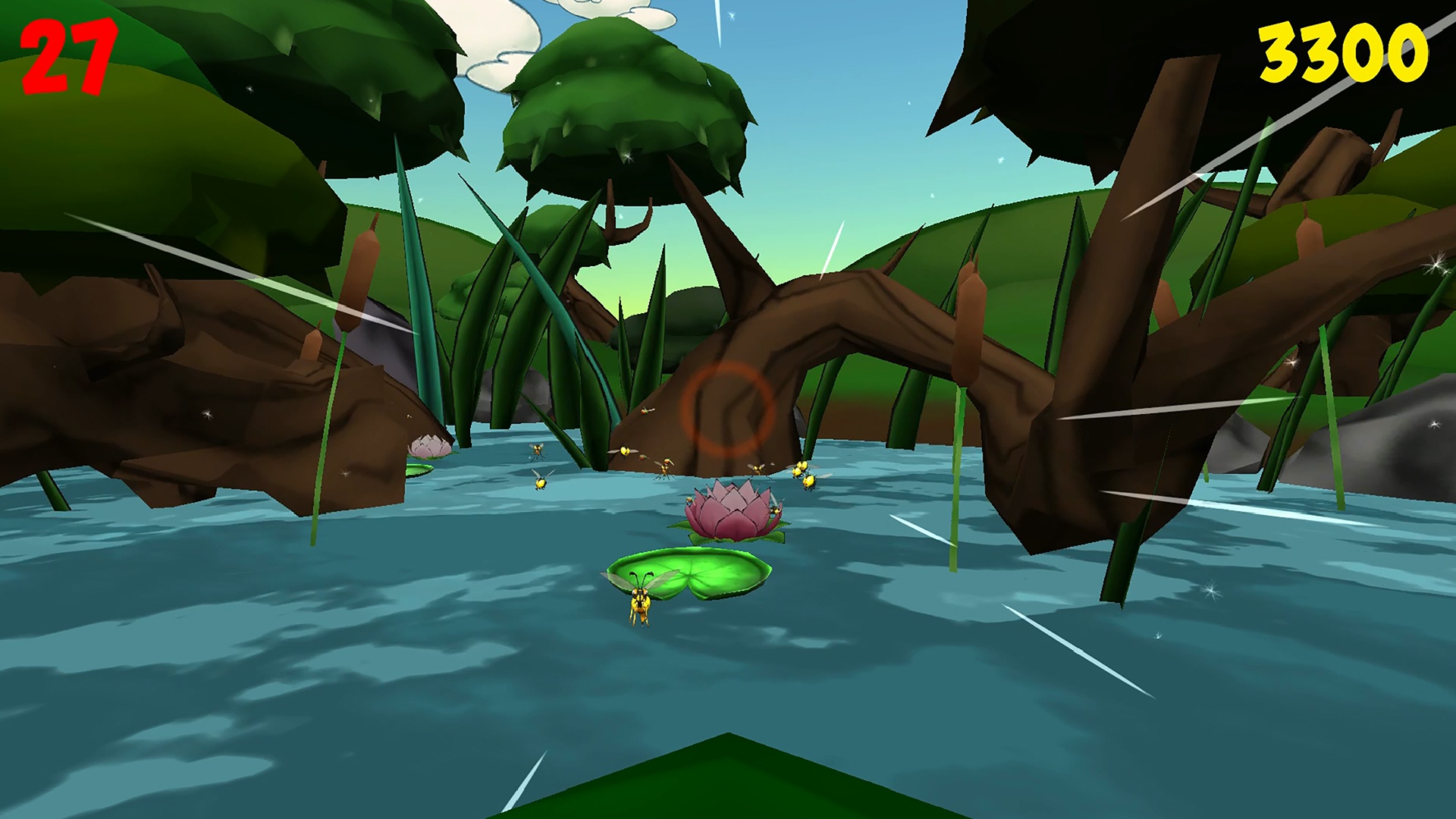 The Nintendo eShop is a minefield of games which attempt to stand out by experimenting with their gameplay features. One such example is VRog on the Wii U, a game in which the player takes on various challenges through the eyes of a bug-hungry frog. Though not an immersive virtual reality title in the fullest sense, this game takes a unique approach to world display and gameplay, allowing it to stand out among other eShop titles. Similarly, it boasts other features which allow it to be significant when compared to other similar pseudo-VR games. Though it is far from the deepest game the Wii U has to offer, it takes little time to discover that this game is a fun addition to any Wii U console.

Graphically, VRog is what I would describe subpar but sufficient. The graphics are certainly nothing special, with the bugs appearing in the game being just unique enough to distinguish from one another, and the overall graphical scheme just clear enough to give the player an ample understanding of what is going on. That being said, the graphics are also far from displeasing. Certain graphical cues triggered by eating certain bugs, though fairly simple, still add a level of unique complexity to the game. This game takes a similar approach to audio, possessing simple music and few audio cues. However, the audio cues which do exist do serve specific purposes, and while they are not always the most pleasant to hear sound effects, they are not overly utilized to the point of becoming annoying. All in all, audio and visuals are merely a means by which this game accomplishes its larger purpose. 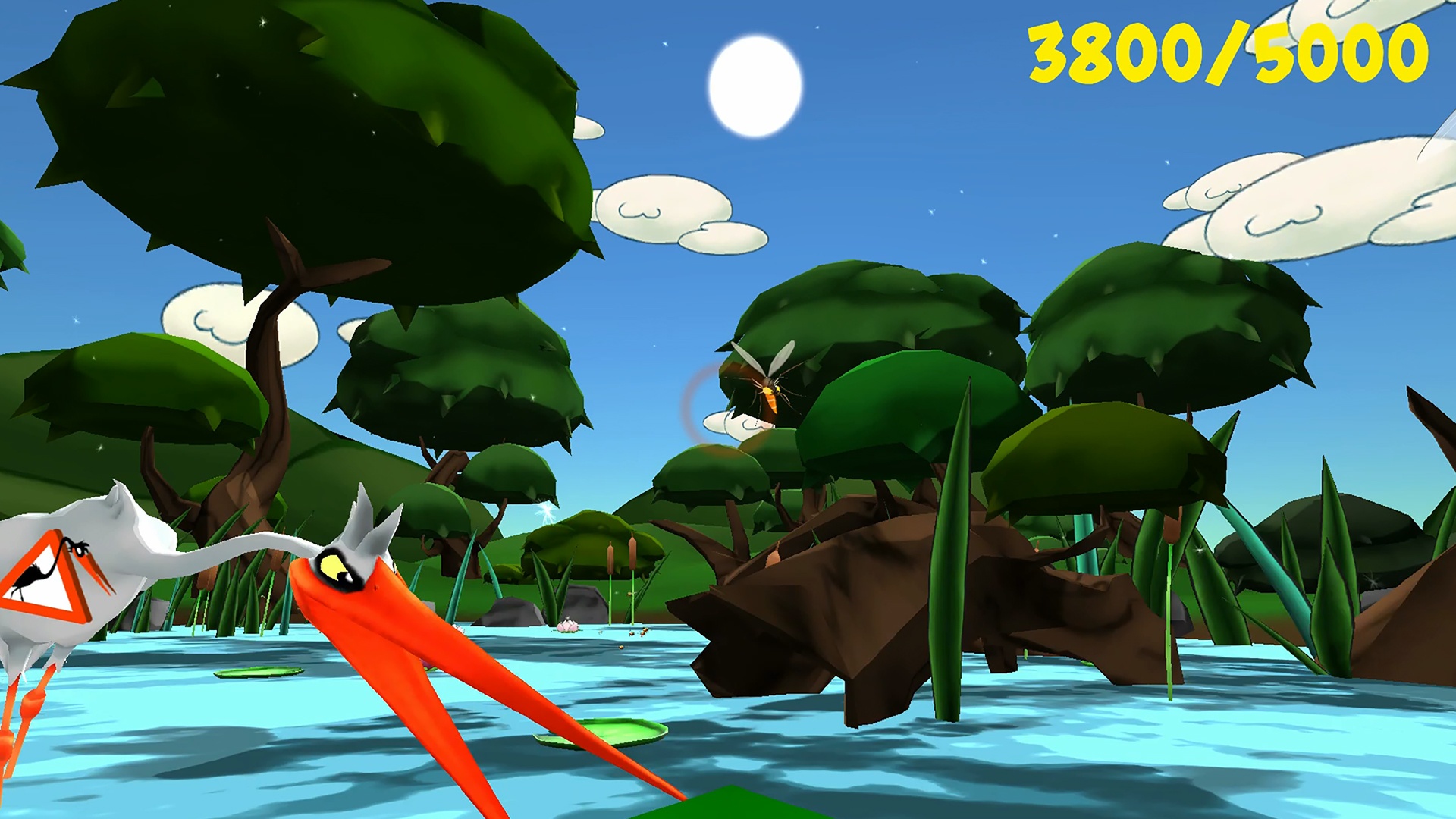 What really makes this game stand out is its control scheme and general gameplay mechanics. Just being a pseudo-VR game on a home console itself is enough to make VRog unique, as such games are much more commonly found on PC. The developers of this game did an excellent job taking the VR format and integrating it to utilize the Wii U GamePad effectively. This game employs an almost revolutionary control scheme in that it requires no buttons. The players looks around by turning the GamePad around (although there is the limited option of using control sticks to fulfill this purpose). The action of hopping to a different lily pad or catching a bug out of the air is performed by simply looking at it for a predetermined period of time (a small icon appears on screen to indicate the amount of time, which is typically rather short).

This game explains itself in one of my favorite ways; a complete explanation of the game’s controls and functions is offered at the opening screen and is entirely optional. The player gets to choose whether they want to study the different point values, get a cursory understanding of the different modes, and learn specific bug combos to accrue more points, or simply hop right in to the gameplay (pun 100% intended). This opening screen itself gives the player a basic understanding of how the game is played, as the player enters the different modes by looking around, looking at a lily pad under a sign which displays the name of each mode, and subsequently hopping into that mode. As a result, this game shows itself to be designed in such a way that favors learning by experience, and doing so rather quickly. 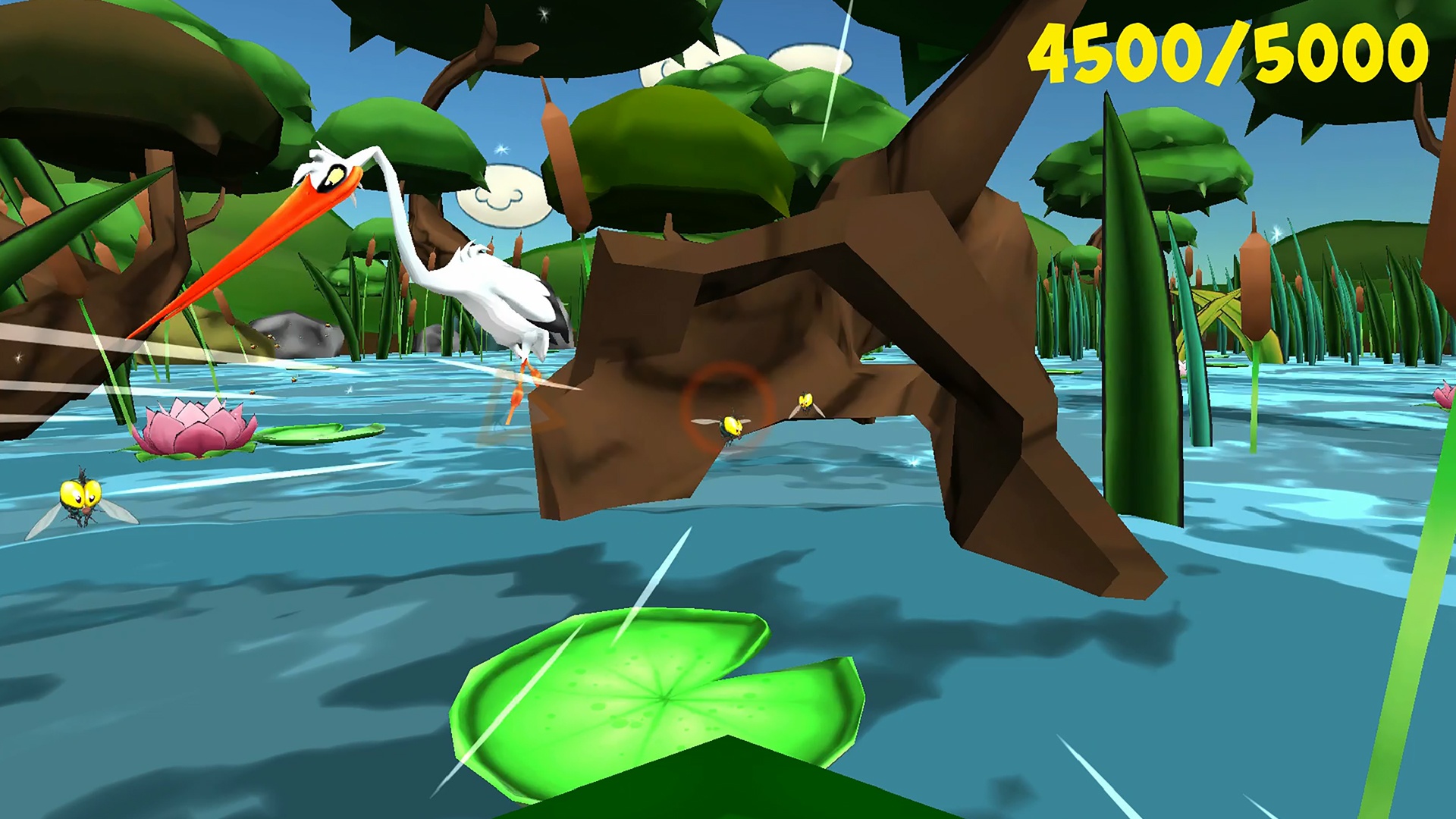 There are two primary single player modes in this game. The first is Survival, in which the player must hop to different lily pads, collecting a set number of bugs, all the while staying out of the path of the Stork enemy that is trying to eat them. Naturally, the difficulty increases with each passing level, with more bugs being required to advance and the Stork chasing the player at greater speeds. This mode features no time limit, allowing the player to take their time in selecting the right lily pads to go to, keeping a safe distance form the Stork, and eating the most valuable bugs before moving onto the next lily pad. The second mode, Arcade, gives the player a 90-second time limit to catch as many bugs and earn as many points as possible. The results for both of these modes are displayed on a scoreboard at the main screen of each mode, displaying local rankings in each mode, which naturally encourages persistent competition (I currently have the second and fourth highest Arcade scores in my region—no big deal).

With its unique gameplay and two solid modes, VRog is overall a very fun game. As far as depth of content, this game is rather shallow. The player may try to hone their skills in this game’s available modes, but overall, most gamers won’t spend exuberant amounts of time on this title. Nevertheless, the time that is spent playing VRog is no doubt time well spent. The game is charming, original, and it provides a simple gameplay experience that is bound to entertain any type of gamer. Though not the most immersive title that the Wii U has to offer, for its broad appeal and overall fun game mechanics, VRog is certainly worth playing.