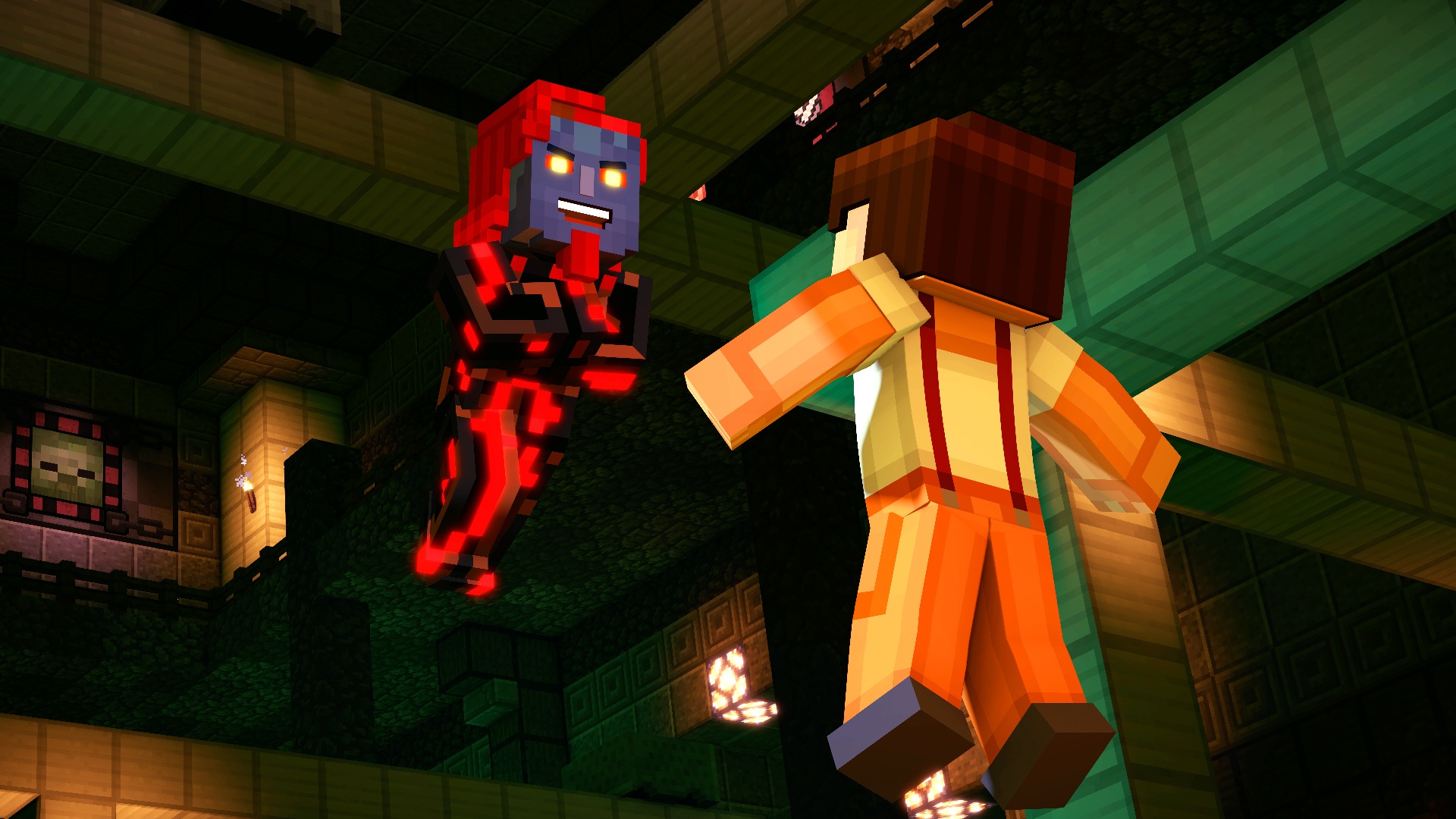 Having survived the Admin’s attacks, traps, and the ‘Sunshine Institute Correctional Facility,’ Episode 3 ended with Jesse and the gang descending below the supposedly impenetrable bedrock. What adventures await in ‘the underneath’? Will they find the secret to defeating the Admin? Will Xara prove to be a friend or foe? These are the questions we have been pondering in the weeks of waiting for the fourth episode and now the time has arrived for answers.

Spoiler Alert: I will do my best to avoid directly answering too many of those questions. However, I will inevitably reference some events form this episode as well as previous ones. If you haven’t played this season or all of the earlier instalments yet, check out our reviews of Episode 1, Episode 2, and Episode 3 first.

We soon discover that this place below the bedrock is where Romeo (The Admin), Xara, and a third person named Fred started out. Inevitably, as Jesse journeys through this eerie landscape, we learn more about the origins of The Admin and how he turned on his friends, devastating the communities they had built and plastering them under the bedrock.

Referred to as ‘The Underneath’ this is where the bulk of the story in this episode takes place, and it is here that I encountered the first issue. This area has been built up as a terrifying place with horrors unlike anything Jesse and co have encountered to date. However, I did not feel this place was any more terrifying or hostile than the Sea Temple visited in Episode 1, the Nether, the End, or any of the other worlds visited in Season 1. Sure, there is a giant enderman and a huge fire golem, but we have already seen a giant ghast in Episode 3 and neither of these new foes are hard to beat. 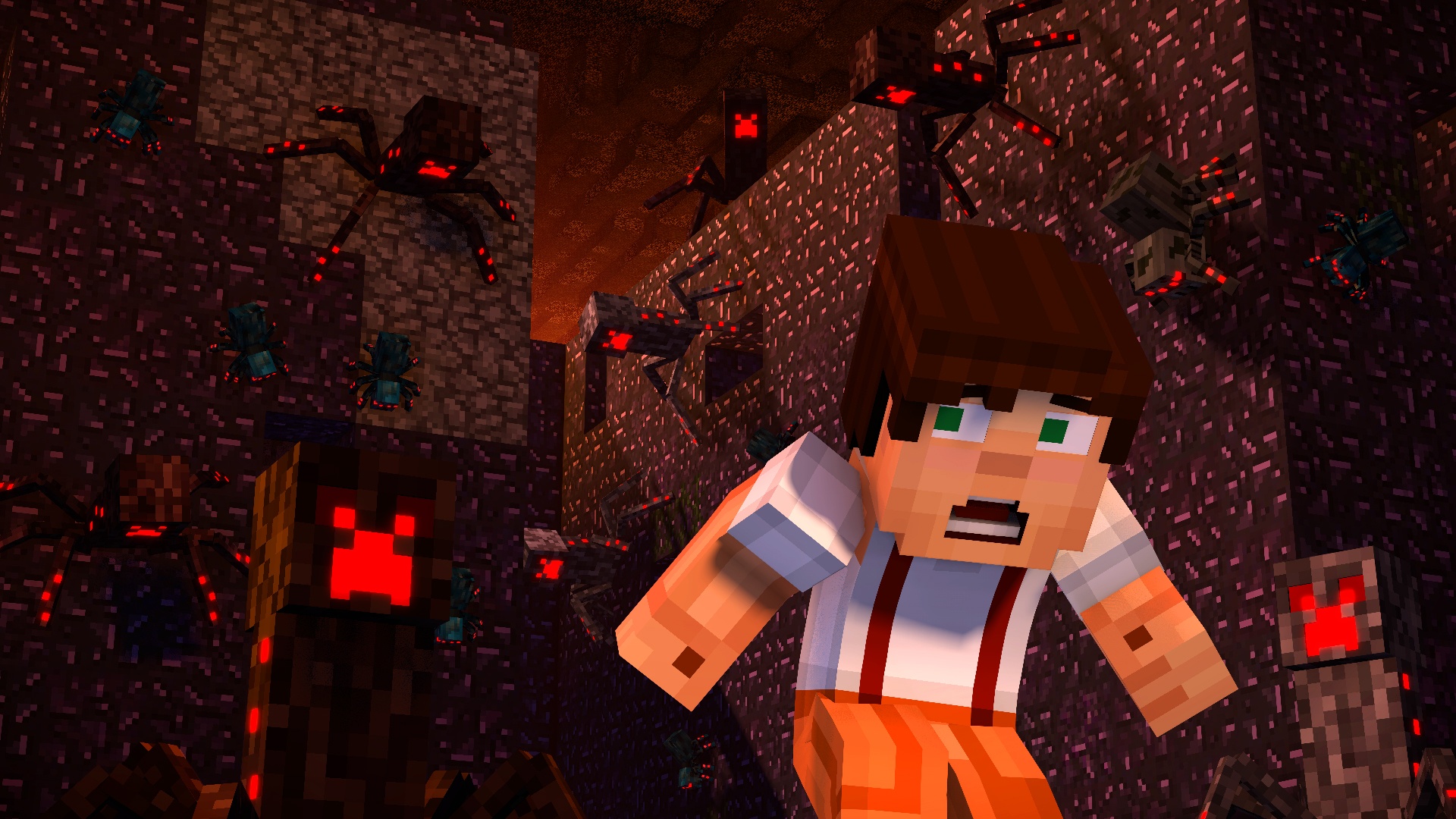 And there are survivors. People from the original communities still live in this inhospitable realm. Early in the episode, we meet ‘the Scavengers’ who try to take advantage of a difficult situation to rob the group of their weapons. Their child-like appearance gives a ‘Lord of the Flies’ vibe, but the fact remains that they have managed to live down here. Later as we search for a secret weapon that can defeat The Admin once and for all, we discover Fred’s community, living in fear but protected by the glow of mycelium around their village. They have access to resources and an established daily routine – not such a foreboding place after all.

In terms of character development, we learn more about the backstory of The Admin, who only makes the briefest of appearances in the epilogue, and how the drifting apart of his group turned him into the crazed abuser of power we have seen so far. This is all to set up the idea that he can perhaps be saved rather than simply defeated and this will no doubt play into the choices of the next and final episode. There is also the option to help Xara come to terms with her past (or leave her to wallow in what might have been should you prefer).

Uncovering this story leads to Petra and Jesse to reflect on the fortunes of their own group. Taking centre stage for a few moments, Petra wonders if her frustration at Jesse, Axel, and Olivia becoming domesticated with their own communities will lead to her becoming like The Admin in the future. It is a well-written and touching moment that anyone who has drifted apart from a group of friends will relate to. We are also treated to the return of an old friend from Season 1 (albeit briefly), who is not only a welcome sight but keeps us updated on the havoc being wrought by The Admin (now posing as Jesse) back in Beacontown.

Radar and Jack also get a little time to shine but they are in the background more than in previous episodes. There is one major choice in the episode that centres on our bespectacled intern and will affect how the next episode plays out. Having said that, there were no real agonising choices in this episode. Based on the narrative I have been following and the relationship established between my version of Jesse and the other characters, only one option seemed logical each time. A look at the stats post-game showed for most choices there was nothing close to a 50-50 split (though that may change as more people complete the episode). This all suggests that the decisions to be made were straightforward this time. There was, of course, an agonising choice between two characters last time, but there was no discernible effect from that in this episode. 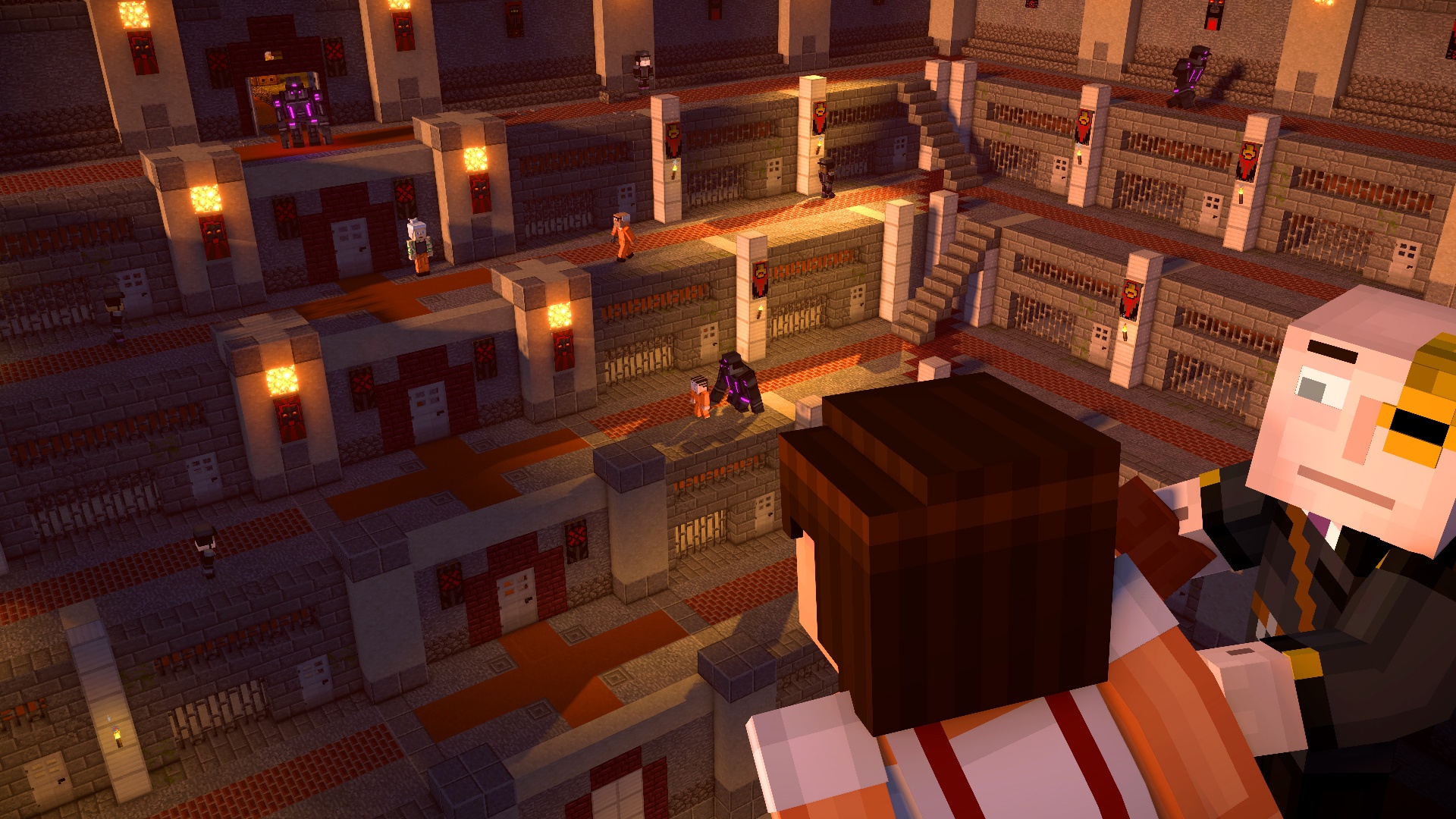 The building mode also features once more, this time coming up in two separate chapters. Once more, it fails to impress. The controls are fiddly and lack the ease of the original Minecraft game, and yet again, this mode is ultimately pointless. In one instance, I was tasked with entering a contest to make a likeness of Fred with coloured blocks. I made a poor effort with two white dots for eyes and a black line for a mouth. My opponent created a 3D bust that actually looked like Fred instead of a generic face and…. the judge declared a draw as I had captured the ‘essence’ of the man. Later, when asked to build a terrifying structure, I placed a single block and the people praised its horror. I would rather choose a design in consultation with my group and then mash the A button to build it. As it is, these tasks feel like a time filler to me more than an integral part of the game.

In its pacing and presentation, the episode sticks to a familiar format. We have encounters with mobs, dialogues between members of the group, puzzles and challenges to complete, and dramatic chases and escapes to engage in. These are well-balanced, avoiding any long stretches of dialogue or never-ending riddles. They also fail to challenge the player, however. Now used to the combat system and well-versed in QTEs, I rarely struggled to complete a stage at the first attempt.

That all made for yet another short episode with the total playthrough time little over 90 minutes. However, we have now reached the point of four episodes having been released so there is 7-8 hours of total playtime here already with one more update to come. Hopefully, it will not be a long wait until the season finale.

As a game, I thoroughly enjoy Minecraft Story Mode, but this is perhaps one of my least favourite episodes so far across both seasons. It was all too straightforward – none of the truly difficult choices that usually define a Telltale Series, no challenging battles or puzzles, and an all too short playtime. Also, for the penultimate episode in this story arc, there was no huge build to the impending final showdown beyond the very last moments of the episode. Fans of the series will no doubt enjoy the further adventures and new players will get to experience the story all the way from the beginning, but I can’t help but feel this episode could have been better.