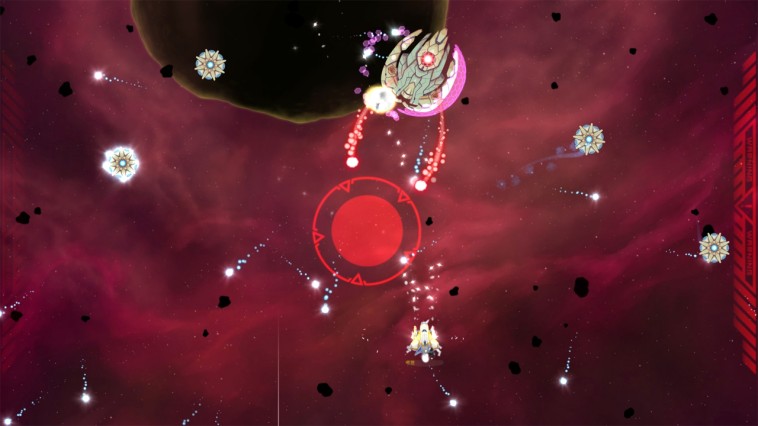 Xenoraid is a tried-and-true story setting as far as setting up a vertical shooter. Earth has received indication of an incoming alien fleet, and all signs point to them being both hostile and not open to communication. Rather than wait till we’re all living batteries, the militaries of the world have come together to retrofit existing spaceships into the first starfighters. Working together in squadrons of four, these brave pilots take to the reaches of space to meet the new visitors head on, and quickly find out that assumptions were correct: they do not come in peace.

Xenoraid takes an interesting perspective on the shmup idea by putting you out there in squadrons of four. Rather than have four ships all firing in a cluster, you essentially swap out ships at a moment’s notice in order to take care of incoming ships. Each ship starts out with a slight variation to what they can and cannot do, but, as you unlock more funds and get further along in the campaign, there’s a variety to the number of vessels that you can have at your command. In addition, each ship has a primary and secondary weapon, with the primary being unlimited (but potentially overheating) and the secondary is powerful (but has limited shots each mission).

There are plenty of things that I like about Xenoraid, starting with the customization. The first time out, a player might feel inclined to drop all their cash into a single ship, maxing out their specialty weapons and creating one powerful leader to three other, “backup” ships. You’ll quickly and painfully realize what a fallacy this is, as there isn’t a single upgrade that makes your ship “teen novel protagonist invincible.” That is to say, it only takes about six direct hits, on average, to completely detonate your ship. When you realize you’re in danger mode (and the screen tells you as such), you’ve got two choices: go down gunning or swap to another ship which you’re now realizing is pitifully underpowered. You can suck it up, divide damage between all the ships and then finish the mission, but it’s still a blow to the pride that teaches you a valuable lesson: teamwork exists even for a single player. 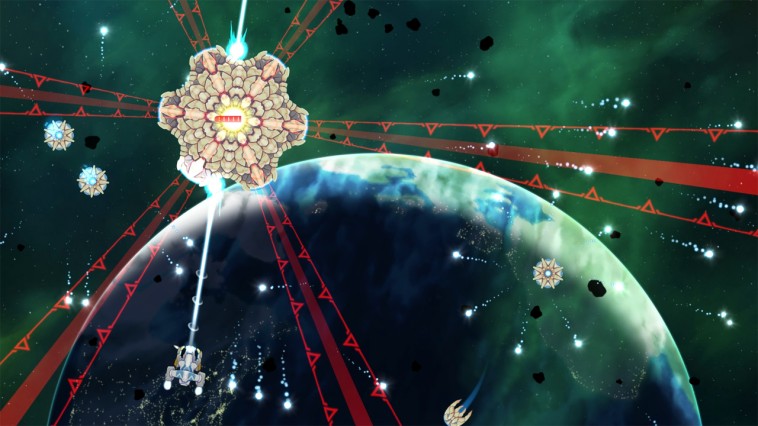 The variety of weapons isn’t incredibly extensive, but there’s still enough there for you to really get a nice crew together (after unlocking enough ships). Between rapid fire gatling guns, shotgun-like projectiles and exploding shots that scatter upon impact (after a minor upgrade), you learn to balance out a squadron of strengths and weaknesses, and this is a part where Xenoraid unexpectedly shines. Either by coincidence or design, you have a temporary moment of invulnerability when swapping out the ships. Granted, you can’t fire at the time, so it’s not totally broken, but rotating ships when things start to get a little hairy can seriously mean the difference between success and failure. Sure, you miss a couple of aliens and end up with a lower cash bonus at the end, but it’s much more worthwhile to eat your pride than to bury another soldier.

Getting beyond your own personal setup, the enemy fleets of Xenoraid are no slouches either. Between smaller, faster ships to massive imperial freighters, you have your work cut out for you in terms of what the aliens are bringing to the table. Thankfully, the intelligence agencies are able to give you an expectation of what kind of ships you’ll be dealing with at the start of the mission, an aspect that I really enjoyed and also made it possible to plot things out for the duration of a battle. A general never plans to go into a battle and lose, but, if I see the number of ships coming up and think I’m underpowered or have the wrong assembly, I can at least make a note, lick my wounds (provided I don’t lose all my ships) and try again. However, you may only get a short announcement at the start of a battle as to the terrain where you’re fighting, and things like asteroid fields are a frigging white whale to me. I can’t be totally mad, because I knew there would be asteroid fields in space: we’re fighting around the solar system, after all. 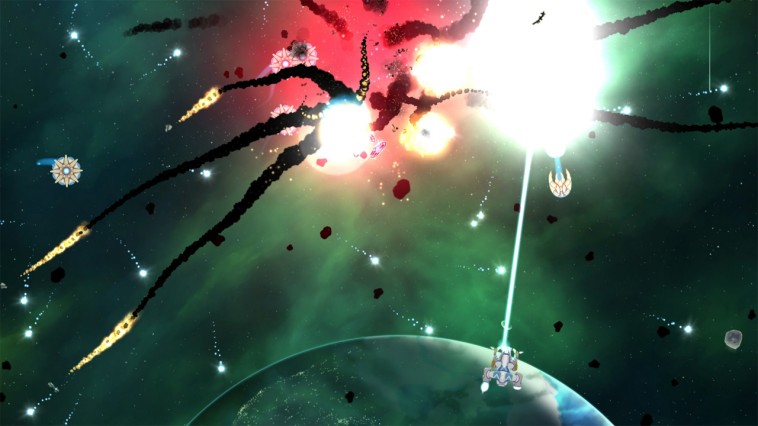 The survival mode was, technically speaking, not my favorite. I think there’s a lot of charm in the main campaign mode and being able to advance your ships gradually, moving into the greater and greater sets of challenges (such as cloaking technology on enemies) bit by bit. In survival mode, it’s a neverending fight to get the high score and personal best, and that seems almost hedonistic in comparison to what you’re doing naturally. Don’t get me wrong, I see the merit, and it actually works as a great training simulator for campaign mode: using weapons that you wouldn’t normally, experiencing the non-weapon powerups that can be toggled on or off (like the “blaze of glory” detonation) and even taking a peek at the planets you haven’t yet gotten to. But I got exhausted dealing with so many enemies in a row, and it felt less charming than the main mode.

All in all, Xenoraid is another solid title from 10tons, a company who I severely overlooked prior to their Switch debut. It’s certainly a much different beast than the classic shooters that SNK or even Grasshopper have brought, but something different isn’t always bad. This is the ultimate in decision making and unforgiving progression: if you lose everything, you have to start from the beginning, and that can literally be hours of your time wasted. Fans who are looking for a shooting challenge that takes on a heavy sense of decision making should definitely consider joining the Raid. But, if you prefer your progression to be saved and flexible, you gotta dock elsewhere, cowboy.